You are reading
The Legend of Heroes: Trails of Cold Steel 2 – PS4 Review

Welcome back to Erebonia, a land once yours to explore with your classmates, now embroiled in a civil war. Participate in intrigue, side-questing, monster extermination, and giant mech fights. Join Rean in his adventure to reunite his fellow classmates, and maybe scrounge together some form of resistance against the heavy handed generals participating in the civil war.

The story of Trails of Cold Steel 2 picks up right after the ending to Trails of Cold Steel. For those unfamiliar with the first game, there is a plot summary for you to get caught up with the previous events though you may not be as invested in the characters. Continuing from where the previous game left off, Rean awakens in the mountains alone after escaping at the end of the first game. Striving to reunite with his friends, he embarks on his journey to bring the butcher squad *cough* party from the first game back together, meeting new people along the way, as well as some memorable faces, whether that be a good thing or not. 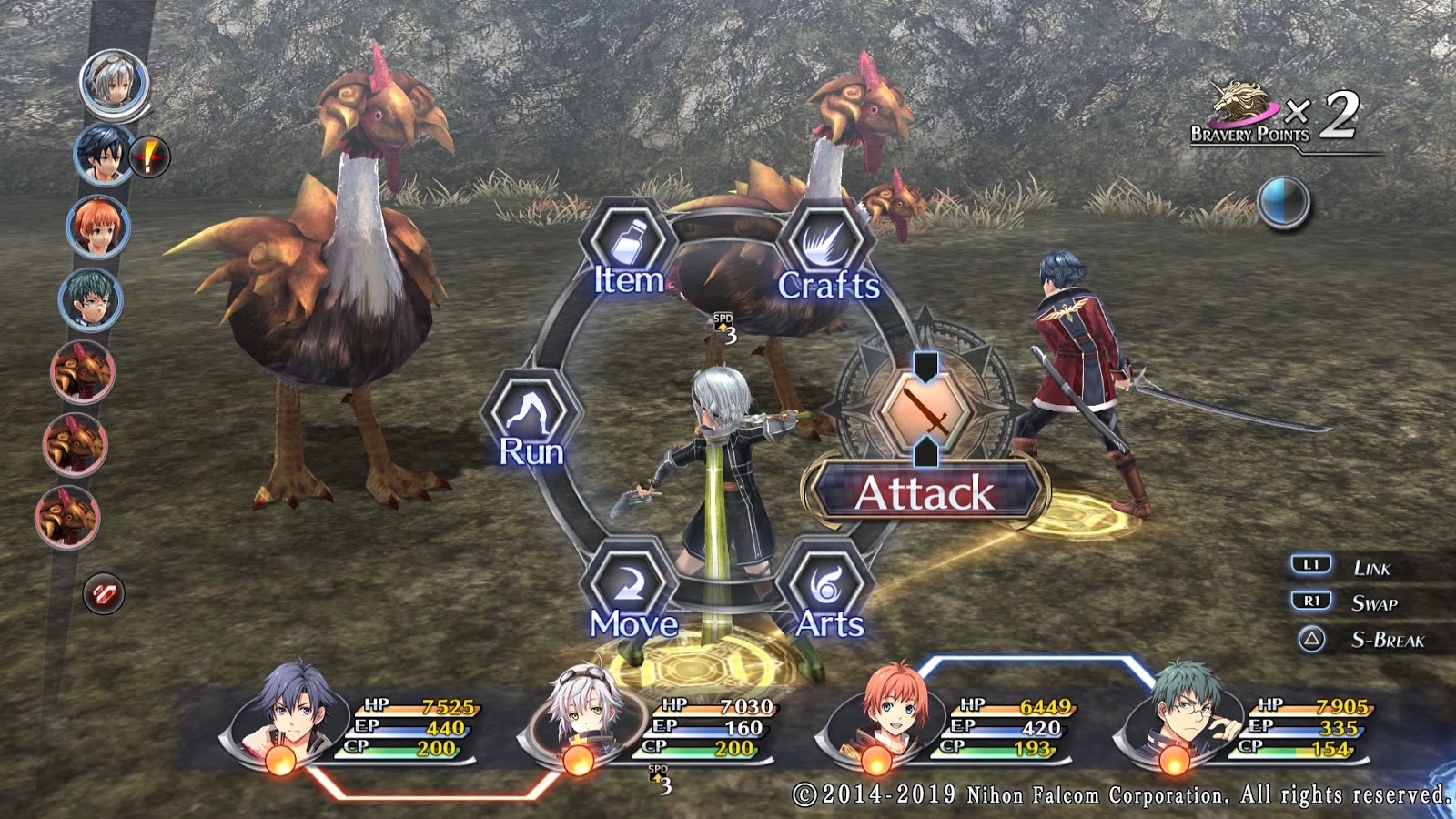 The battle system from the first game is largely unchanged, at least for the most part. You still have your turn based battle system starting up after colliding with enemies on the field map. You have your normal attack, your character specific craft skills that take CP to use, which you recover through attacking enemies, and your magic art skills that take EP, which doesn’t naturally regenerate. You still have your link attack follow ups and “bonus actions” when you’ve stored up enough points from follow-up attacks.

What is new is the overdrive ability. When first starting out, anyone linked to Rean is able to go into an overdrive mode with him, which gives three attacks inserted into the turn order for the two partners that are assured to unbalance the enemy, allowing you to perform follow ups. You can unlock this for other party members by finding these blue chests scattered throughout the field. Beating the boss from these chests allow other party members to use overdrive when linked with each other instead of Rean.

Additionally, the “rock, paper, scissors” mech fights have now become more prominent, with a few additional features. While the main concept of choosing an area to attack that will unbalance your opponent is the same, you now have more skills available to you. Your teammates are now also recognized as party members for the fights, and can cast spells and will allow you to use a special finishing move if you stock up enough unbalance points. 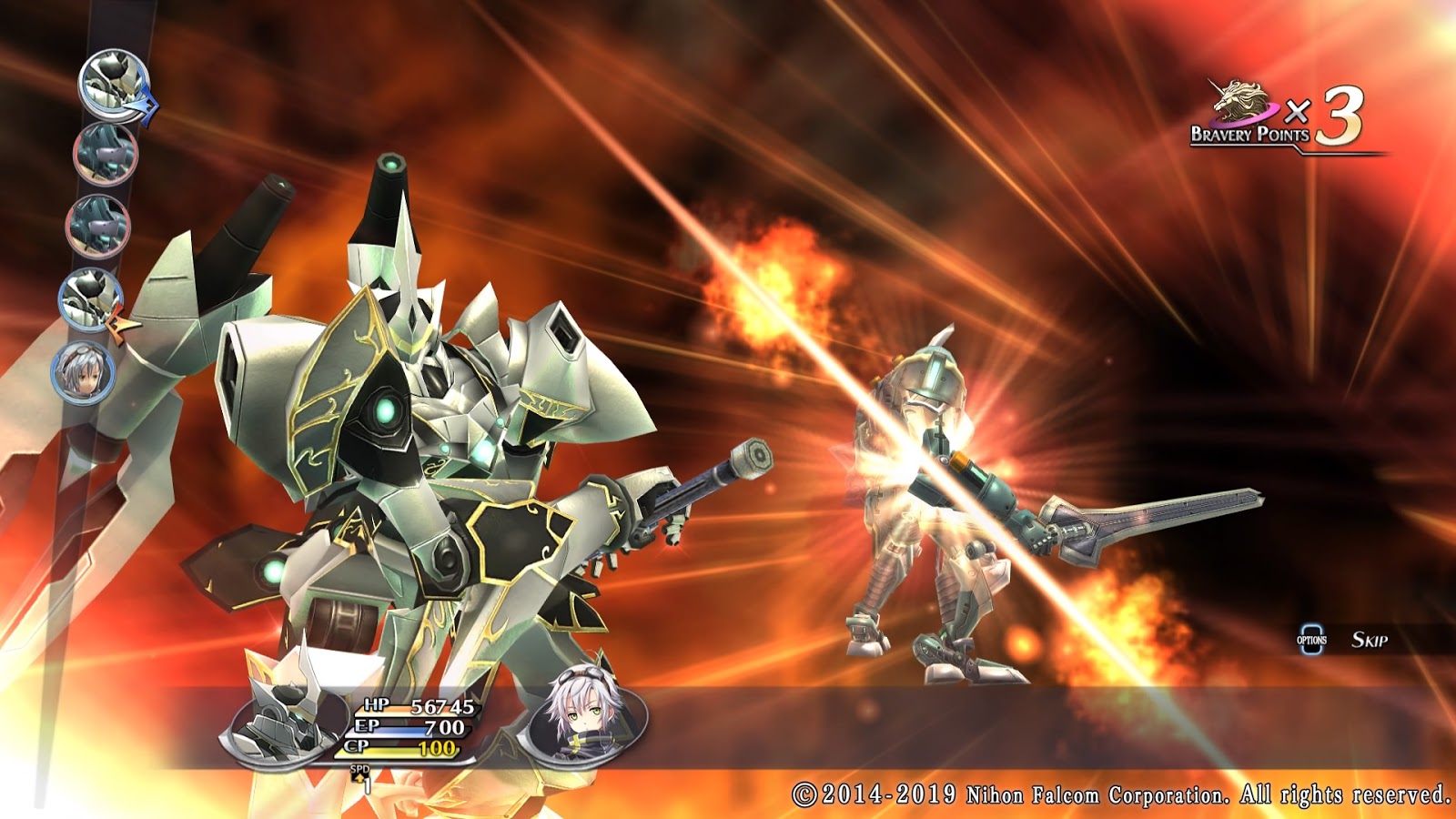 In the long run, not much has really changed from the original game in terms of how you play. You still play in “chapter” installments, although this time they’re sort of grouped together in chapter halves. You have a portion spent in the town you use as your base of operations. Here you can interact with your party members, building your bonds and learning more about your friends. You can help out the townsfolk, do some snowboarding minigames, or explore the monster infested mountain out back, and maybe get some fishing in.

When you’re all set to head out, you journey out to either find your missing classmates or complete whatever you have set as your objective. Generally this means visiting a location from the first game now changed by the war, and helping out the locals while trying to get Laura the Obliterator and Fie the Ninja, er, I mean, your classmates back together. So off you go, fighting the monsters in your path, fishing in unlikely locations, and general side-questing while exploring the familiar and new at the same time locales. If you recall areas from the first game, they may have changed from what you remember, with some new areas to explore and collect all the treasure chests from.

Good news for those who found the cheese strategies from the first game, most of them still work. The quartz system is still around, only instead of unlocking nodes, now you upgrade them to allow you to use higher rarity quartz, and most of the Master Quartz have also made a comeback. Those new to the scene, Master Quartz act as a sort of “class mod”, enhancing some of your stats and giving you some arts and skills that you can use. The Master Quartz can be upgraded by having them equipped during battle. As they level, the skills they provide will increase or get better, and you are given access to more arts. 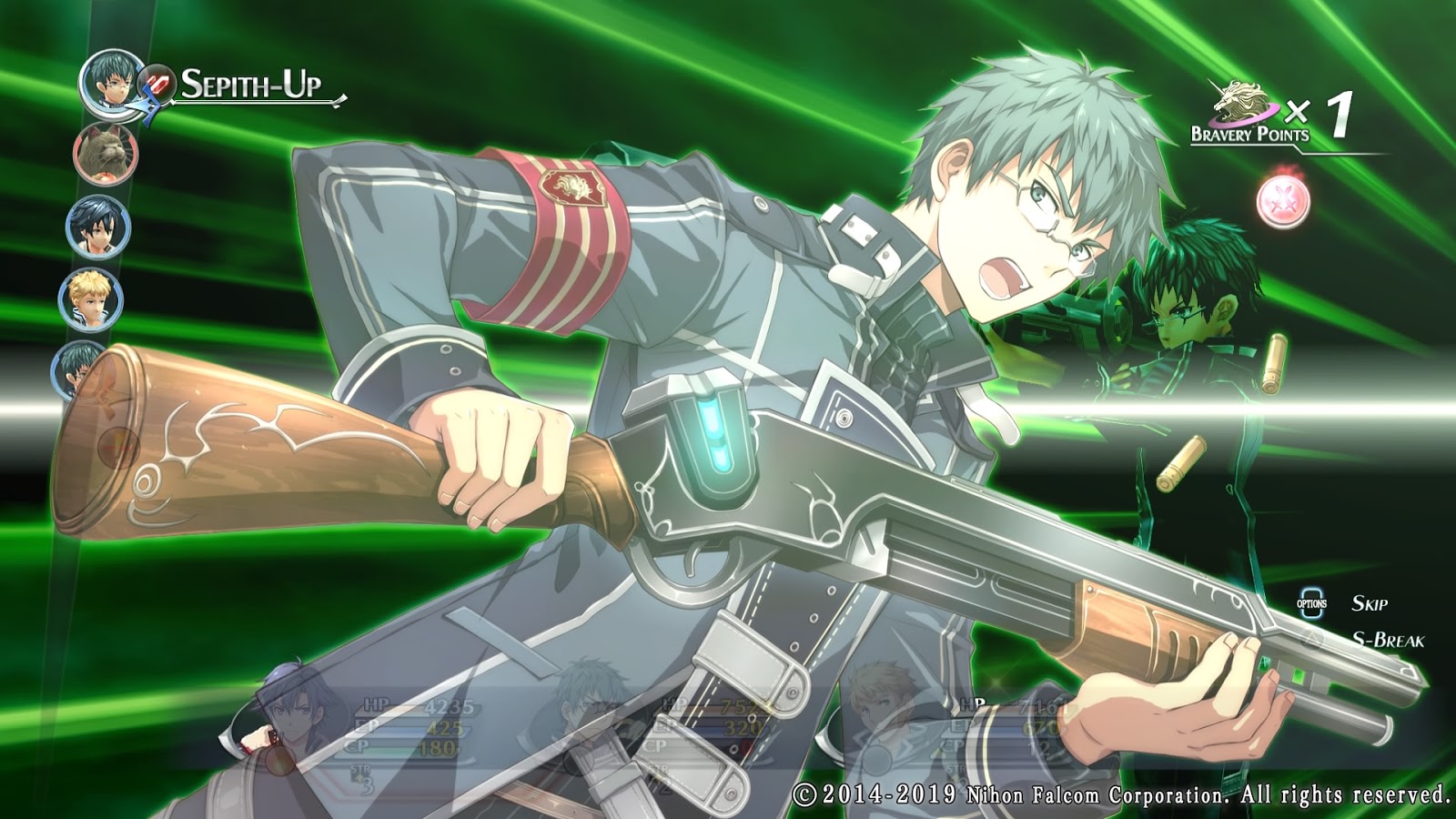 The normal quartz act as sort of “equippable magic”, as you can slap quartz on your “grid” to allow the character to use the associated spells in battle. Some quartz have passive effects as well, such as giving stat boosts, or allowing you to see treasure chest on the field map. This provides a lot of customization options for your party, as you could technically make your warrior into a healer if you really wanted, as ill-advised as that may be. As I mentioned earlier, most of the cheese strategies involving quartz set-ups are still available, so all you (myself included) who turned Laura into a walking death tank, or Fie into a ninja that never got hit and got seven turns to the enemies’ one, you can still do that if you want to make some of the bosses a joke.

So are there any differences in the PS4 version? Compared to the PC version, which I also played, not really. In terms of content and key gameplay, nothing has been added. The console port does, however, feature additional voiced lines, a Japanese language option, and the function that should have promoted someone ten times over say, the turbo function. For those of you on console who didn’t get this option previously, turbo mode allows you to move four times as fast in battle and two times as fast on the field map. This also applies to cut scenes, so those going for a new game plus run on nightmare will appreciate this mode.

Trust me when I say the turbo mode is one of the most beautiful additions to the PS4 port. I almost always have it on, not because battles are boring or I want to speed through the game, but sometimes you just REALLY don’t want to spend two hours farming money to buy that new weapon or to level enough to beat that boss that’s been rolling you over for the past forty minutes. You can also “skip” actions in battle to speed up the fight, but I found I didn’t notice if my characters got status infliction if I did that, although the option is nice. The graphics are also all nice and crisp, which I really noticed coming from my PC version that for some reason refused to display the “blurred” effect correctly. So now I can see all of the anime-esque stylized character models in HD instead of “ugh”. 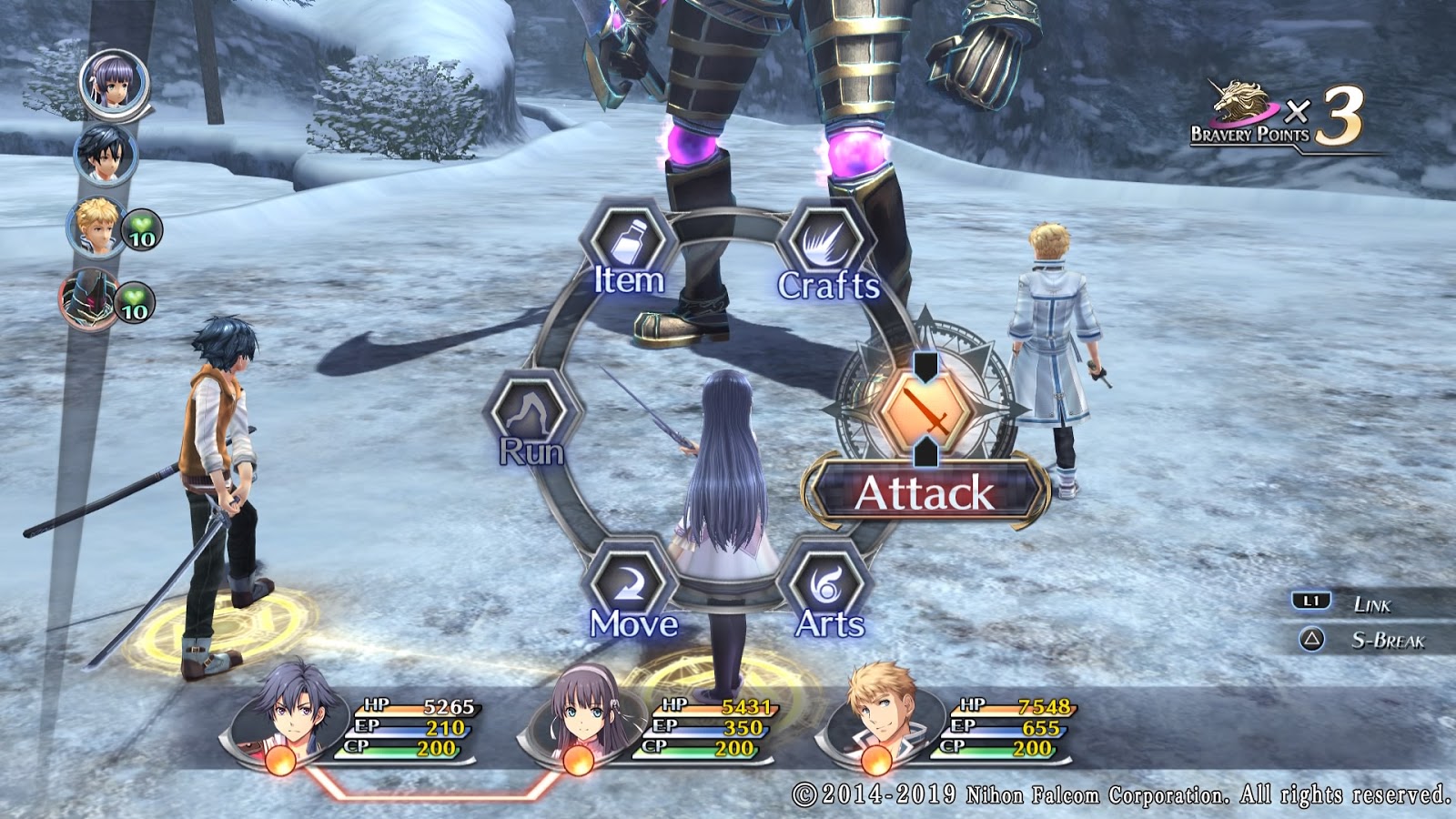 Is it worth getting the PS4 version if you already own another version? Probably not unless you’re a hardcore collector aiming for a special edition. Is it worth getting in general? I’d definitely say yes. The game runs smoothly, the music is still as great as I remember, with some of my favorite battle and field themes, the characters are interesting, and the battle system is both traditional enough to not give someone a meltdown, but also has enough unique properties for me to not call it a clone of another game. The game also blatantly tells you each time you hit a “point of no return”, which is super handy for finishing everything you want to do and not getting peeved because you can’t get back to a town. Overall, I would definitively recommend giving this JRPG a shot, even if you haven’t played the first installment.