You are reading
Kotodama: The 7 Mysteries of Fujisawa – Switch Review

Kotodama is an interesting experience. Essentially, experience rather sums up Kotodama as a whole. As a first development project from PQube, who’ve been solely a publisher before, Kotodama is their first experience in actually developing a game. For the players as well, Kotodama is best summed up as “an experience that’s difficult to describe”. Between some odd dark tonal shifts, stripping people in your mind, and having some moments that you’d need to be psychic to expect, Kotodama certainly has enough uniqueness to leave an impression.

In Kotodama, you play as a faceless new student at the titular Fujisawa academy in this anime styled visual novel type puzzle game. By the way, it turns out you have a contract with a demon cat/fox thing named mon-chan. She’s snarky and amusing, but she also grants you the power of “kotodama”, or power over “words”, as it were. This is pretty much stated as a “side thought”, but is a core premise of how the game functions. You soon get introduced to the new class you transferred into, and meet Nanami Kagura, a spunky girl tasked with showing you around the academy, who draws you in to the Occult Research Club to investigate the oddly unique “seven mysteries of Fujisawa”, which range from mundane to “serious ethical and sanity concerns”.

Kotodama is set up as a sort of visual novel meets bejeweled, or HuniePop, if you’d prefer that comparison. Essentially, the power that Mon-chan provides you with is the ability to “command” people with your words, which for the most part is just forcing them to tell the truth. In this case, this is done by “peeling the layers of the mind”, which your main aptly does by imagining literally stripping your fellow students… Either way, you match three or more symbols in a grid with a limited amount of moves in order to force your “opponent” to spill the beans about whatever you’ve asked them. 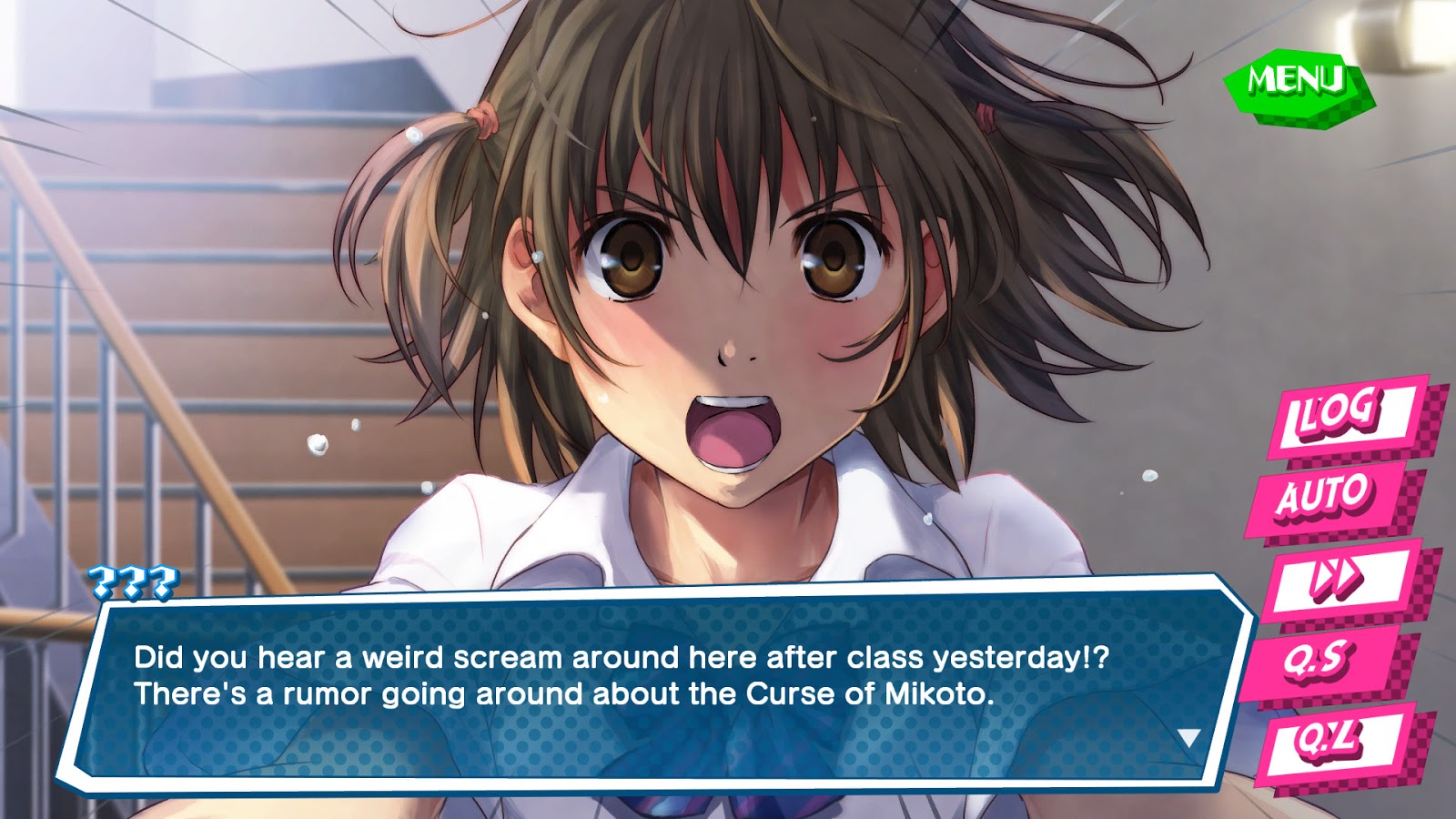 You select a symbol and it gets moved to the top of the “grid”, while the rest drop down. There a special power ups and moves that can appear, and if you remove the “preferred” symbol, it allows you to “poke” the picture of the character you’re “fighting”, and you have a chance of earning extra moves. I’ll be perfectly honest here, a large chunk of these games can be reduced down to luck at times, and as much as you’re helped out by the game showing you a possible move if you wait too long, I found myself barely winning some challenges. And yes, it’s game over if you lose, so save often.

As you talk with classmates and progress through the story, split into seven chapters for each of the mysteries, you will learn “key words” that help level up your abilities, which will provide more points when matching the associated symbols. Most of these are pretty easy to pick up, but the last one I was missing took me an excruciatingly long time to figure out. As you chat and explore the mysteries, you uncover more about the academy and the people who go there. Some things corny, some dark, and at least one where I could only respond with “O_o”. You get to make the occasional choice as you chat or reach waypoints, making the quick save and quick load function super handy, as after you’ve selected an option the text will change color to indicate it’s importance to the story and whether or not you can reach the true ending.

Pro tip, red doesn’t necessarily mean the bad ending. You can also skip through previously read text rather fast, which is a really good thing, since every time you fail to reach the true ending you’re sent back to the beginning of chapter 1. And no, you don’t get a chapter select. I mean, I understand why plot-wise, but good lord it was infuriating to get to the final chapter, only to realize I made a mistake in the previous chapter and now need to sit through all the text AND match-3 games again. Yes, you need to do them again, even if they become basically trivial by the end. Please PQube, put a “skip completed puzzle” in the next time you do a game like this, please, for my sanity. 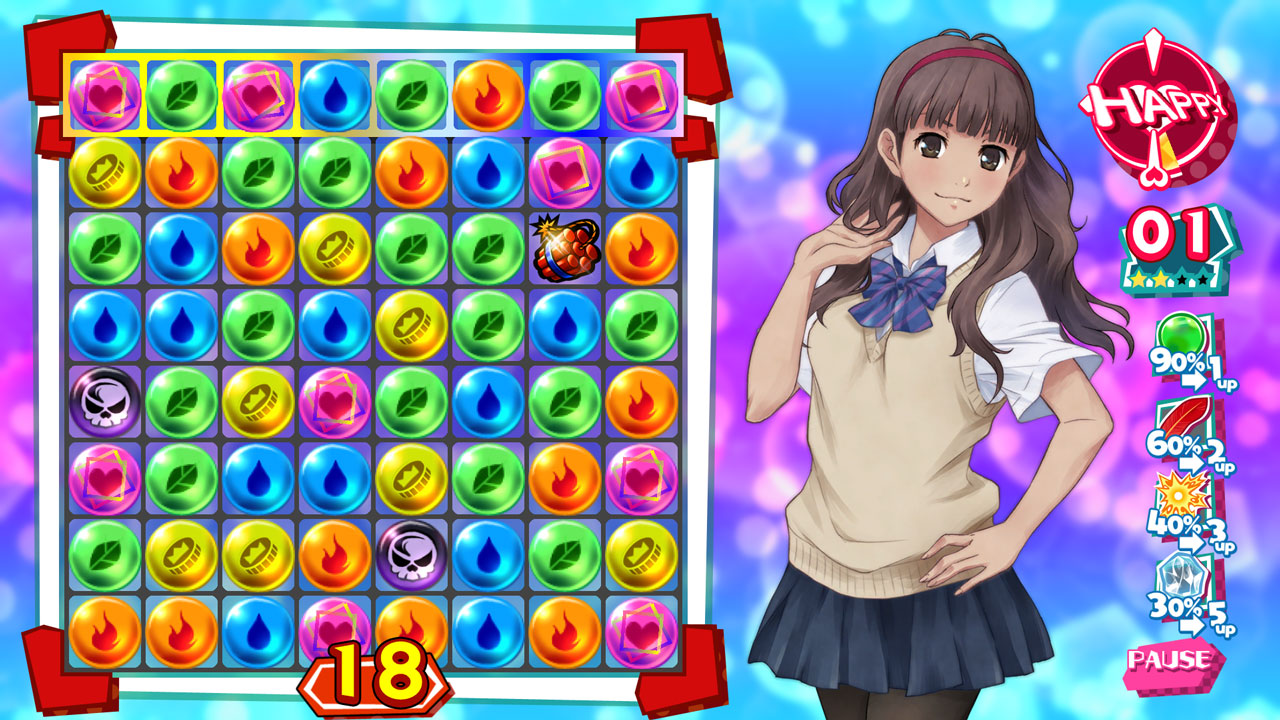 Overall there isn’t much more to say about Kotodama. You’ve got a visual novel with mystery and some surprisingly dark moments, an ending that left me with the only thought of “wut” for a solid ten minutes, but in a good way. Game mechanics during the puzzle sections are pretty solid, but could definitely use some polishing in the visual novel portion. In the end though, the main thing I came away with after finishing everything I could do in Kotodama was the thought of “I want a prequel or sequel”. I wanted to know more about the main character and mon-chan. What happened at their previous school? Why do you have a demonic contract in the first place? And WHAT THE HECK ARE THE MYSTERY CANDIES ACTUALLY MADE OF?!?

In all seriousness though, the game has a lot of faults that really bothered me. Mostly small little things that build up, especially when you’re on your twelfth time running through chapter 1 again and getting really fed up with being forced to redo all the puzzles. Pro tip number 2, I’m pretty sure you can collect all the words in one run through a chapter, so you can probably just restart a chapter from an earlier save if you missed something, but in my infinite wisdom I decided I might actually miss something if I did that.

On the other hand, Kotodama was weirdly entertaining. I found the characters mostly interesting, the storyline was engaging, and for a first production project, PQube did really well. Does that justify the faults? Well, maybe not all of them, but like I said, Kotodama is an "experience", both for the players and developer. I really do want that prequel though, so hopefully PQube will release that as a polished version of the gameplay or something similar. If nothing else, I'd definitely suggest checking the game out.