From the onset, Project Nimbus will not be for everyone. Giant mechs called Battle Frames, floating cities in which humanity escaped to after the third world war, orbital elevators, mass drivers to launch ships into space and more missiles than the Switch knew what to do with at times, I was in love. Fans of Gundam, Macross, Aldnoah Zero, Code Geass or any other mech heavy anime out there that don’t immediately come to mind will plenty to love with fast paced combat and a storyline that would make most anime lovers happy.

Other than some fast paced combat, I wasn’t expecting much else with Project Nimbus. This isn’t a bad thing as sometimes you just need to “play” and not worry about fifty thousand other things like if there was enough ammo in the cache or if you made sure to tune the servos in the arms. That said, it didn’t take very long to be happily surprised at there being more than just fast paced combat.

The reason that I didn’t really add in Armored Core or even Gundam Builders and just left it at Gundam, is because instead of building your own mech, you are given a mech or a choice of mechs through the characters that act as the protagonist of the moment. Having done so, by splitting your time between different characters and factions you get the whole picture of the current events instead of just the narrowed view of one or two individuals which adds a depth and a story to mesh it all together. At the same time you also get to experience what it’s like to be at the top of the food chain and other times somewhere in between. 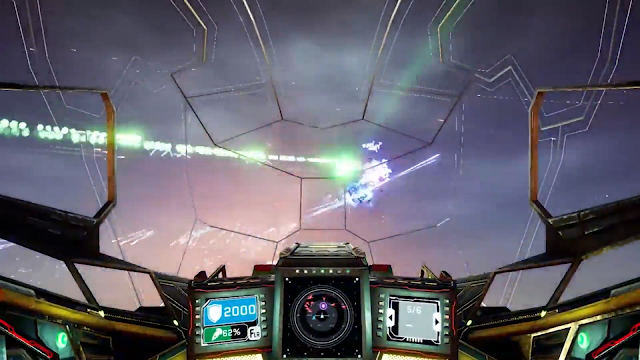 This is something that Project Nimbus does really well. By switching up the pilots and the mech, the combat doesn’t ever limit you. Speed, weapons, altitudes… well it does in the case of falling into the atmosphere… but in general, it doesn’t limit you. You can fight and fly high, low or somewhere in the middle while unloading ungodly amounts of ammo and missiles into the enemy forces that are trying to destroy you or what you are protecting. Each mech that you’ll have the change to pilot has a variety of gear that can all be reloaded, and depending on the firepower, shorter or longer reloading times. You pretty know what you have in your hands the second you launch and while some can move faster than others, the others have railguns and only need one shot to even take out larger aircraft carriers.

That in a nutshell is really it. You get a bit of hanger dialog before a sortie, you get some dialog while dodging and flying through various environments both planetside and in outer space, you unleash hell while dodging and flying, and then you have a cutscene that moves the events forward before the rinsing and repeating. And it works. It works very well because of how they’ve tied the characters into the overall events and it honestly felt like I was playing an anime mecha series.

The only real areas that could have used a bit of a buff is in the sound and some of the visuals department. Because things move so fast, you don’t really get to see the details on most enemies, they are just blips moving at fast speeds until you move in close for a sword strike. Larger enemies you can see and appreciate the detail but they are gone in an instant. It works with the speed set out but it would have been nice to see a little more than you do. The audio however was a mixed bag. 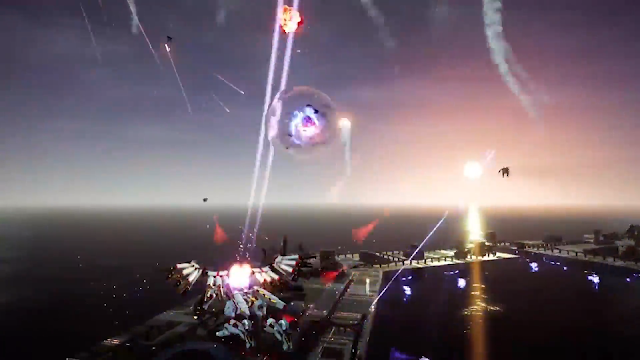 Sounds effects are spot on. The whooshing of missiles, the ra-tat-tat of machine gun fire, the sound of engines being kicked into high gear. Stellar. The character voices in comparison to all of that? Needed to be louder but if you decrease the rest, there’s still a disconnect as the voices are low but the notifications of a certain ammo type being reloaded are unbearingly loud. The background music was often either there or nothing at all. When it’s there though, wow, it’s there and it brings everything into that feeling like when you’re on episode 36~38 of 50 and things just HAPPENED. Sadly the rest of the time it’s only really there to block out pure silence but not enough to be any sort of memorable.

Whether on a giant screen on or in your hands, in the middle of epic combat or between missions while getting a briefing or listening to dialog, the complete edition of Project Nimbus is fantastic. Fast paced, well written, it may not be for everyone but for lovers of mecha? It's a must!