Our four Goddesses are back again for some more light hearted console rivalry, or they would be, if they remembered who they were! Taking control of Neptune, it won’t be long until she runs into others like Histoire in book form or the Tsundere Queen Noire and the hot tempered Blanc while on the quest for allies in order to fight the tyranny known as “”. Sadly it takes too long to get my beloved Vert into the party.

Super Neptunia RPG is an interesting one as it’s the first Neptunia title that has not been developed by the Japanese studio of Compile Hearts. Instead, this latest entry into the series comes to us from a studio only a few hours away from where I live in Quebec City, Quebec. Yes the city is named after the Province. So not only is this a western studio handling a long running Japanese designed series, it’s a French Canadian studio which lead to multiple levels of intrigue for how it would turn out. The verdict? It’s not bad, but, it’s not as great as it could have been.

Taking it from the top, our Goddesses find themselves in a different form of their world Gamindustri in which they aren’t in charge on their respective countries / continents. Kicking things up a notch for how well things are not going for our protagonists, they have a cliche form of amnesia which Neptune fourth wall breaks how cliche it really is. It’s light, it’s funny, but sadly it isn’t enough as other than Neptune basically being Neptune, all over the place and does whatever she wants the world feels empty and the other characters are there in appearance but not there in spirit. 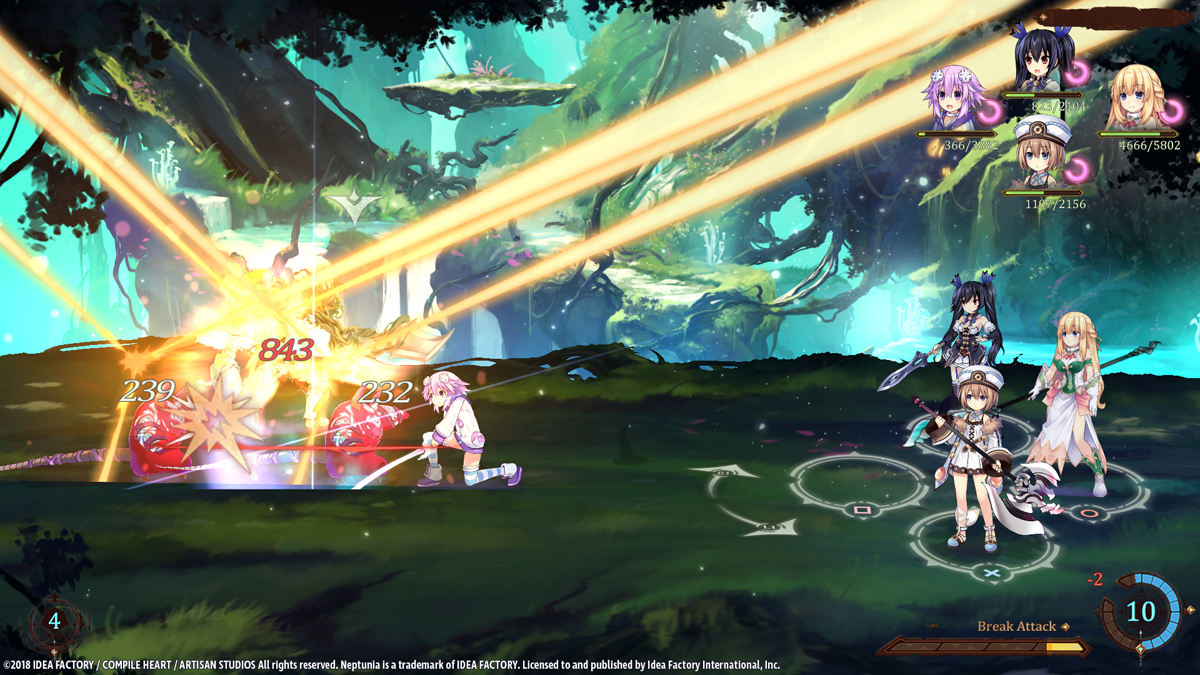 On the note of party members, it’ll be hours before you really get to have anyone truly in your party. Finally getting a hold of Noire and Blanc, they don’t feel right. Sure everyone has amnesia but their personalities are so watered down they may as well only be there for the visual cues. And part of me gets it. You have a studio that’s never worked on the series having to find a way to balance the great ideas that they are putting forward alongside an already existing monster of a series that’s been around for over a decade in which they’ve refined what each character means to the series as a whole and who they are as people.

The other issue in this vein is that the world feels empty. There are loads of NPCs hanging around but once they’ve done their due diligence in giving you a side quest or answering a question based off of, you get “…”. That’s it. There’s no even simulated dialog so when there is a conversation between Neptune and whoever she comes across, cherish it!

From a gameplay perspective though, wow. Sure there are some optimization issues with the Switch in which large environments will cause a lag, both in the cradle and handheld but overall, the direction in design was a fun one. Super Neptunia RPG is a 2D Platformer with a combat style reminiscent of Valkyrie Profile or the more recent homage to it, Exist Archive: The Other Side of the Sky. Running through a metroidvania environment, Neptune can jump, dash, air dash and swing her sword at enemies in order to start up a battle. 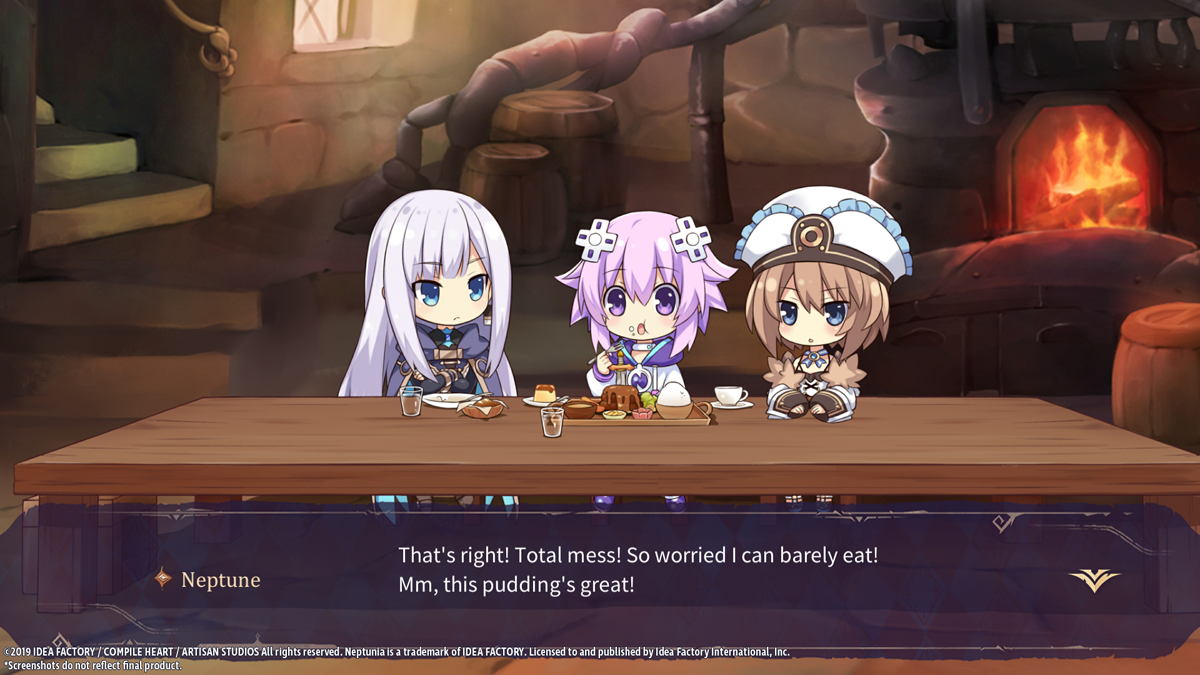 Once a battle begins, there’s a form of “ATB” that is shared between Neptune and her party. Depending on the skills equipped, abilities can range to how much of that gauge is going to be required before being able to do a move. Starting with the standard sword strike, for every “two” units that you have, that’s an attack. So if you have a total of eight, Neptune for example can swing her sword four times to really hammer in an enemy before they can heal.

There is an issue with this system as it’s not purely a you do what you want while the enemies do what they want. If you’re moving in for an attack, you attack and the enemy is stuck waiting to do the same. Once they attack though, you can’t do anything and have to wait so often spamming doesn’t work especially with boss like foes since they move just about as fast as you do. While I would have preferred a: they do what they want and you do what you want, it overall works well because of the levels of customizations that can be had once you start getting party members to fight alongside you.

Unlike your standard Neptunia title, from an individual character’s perspective, you don’t have access to your typical break, rush and beat attacks. Instead, characters can learn these style of skills from items and weapons but they can only have one equipped at a time, meaning that if you only have Neptune, you’ll have to really pick that one carefully. Once you have others though, each character can equip a skill into each placement slot that they can be in, A / B / X / Y for a Nintendo Platform. 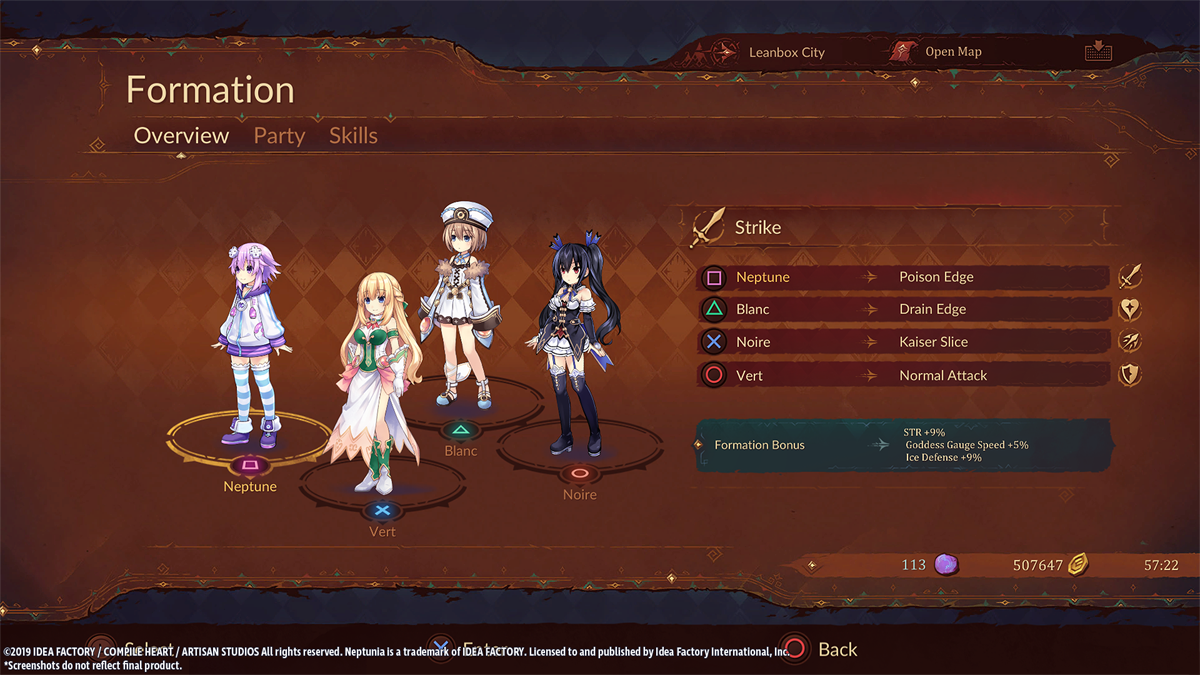 Issuing commands is as simple as pressing one of the character’s current positions as long as there’s enough in the gauge and they’ll do it. From there, your party can be rotated around meaning that for each spot, you can set a character with another skill. This means once you have four characters to fight together, you could have a melee setup, a magical setup, a healing setup or whatever hybrids you want for the fourth.

Overall, while Super Neptunia RPG won’t be winning the top spot for the series, it’s still a decent entry. Being developed by another studio can always come with some curveballs but the ideas that Artisan Studios have put forward made for a fun enough time that I do hope to see more of down the line.