With the release of the upcoming sequel to Dragon Quest Builders later this week, we thought now would be a good time to share what we thought of the demo with you. Available for download on both the Nintendo eShop and Sony’s PSN, the demo gives a quick glimpse into the new features that can be found in this perfect marriage of Dragon Quest meets Minecraft.

There’s no denying that I absolutely loved Dragon Quest Builders. Originally having picked it up digitally and playing through the night once it was released, I’ve also since then bought it physically to have on my wall as well as a copy of it for the Switch itself to play on the go. Was the experience itself perfect? No. It did have issues especially when it came to water and how it could be played with. You couldn’t make waterfalls, if you fell too deep you were basically toast, and if you made a mistake and water filled up an entire area, well good luck. Yes, I had issues with the water but I’m happy to say that while some seem to be solved, I’ll have to wait for the full version to know for sure.

Like the first, Dragon Quest Builders 2 starts you off with a tutorial to give you some bearings for the basics that you’ll need to survive. Starting off on a ship full of monsters and being captained by an undead, the stage is set. Unlike the first that took place in an alternate timeline to the original where the Hero decided to side with the Dragonlord, Builders 2 takes place in a time that has yet to be explored. Picking up after the events of Dragon Quest II in which the descendants of Erdrick took out the demon Hargon, the Children of Hargon are making their return by kidnapping and eliminating anyone with the builder’s potential. Being let out of a cell and ordered to spruce things up on the ship after a storm, the story begins. 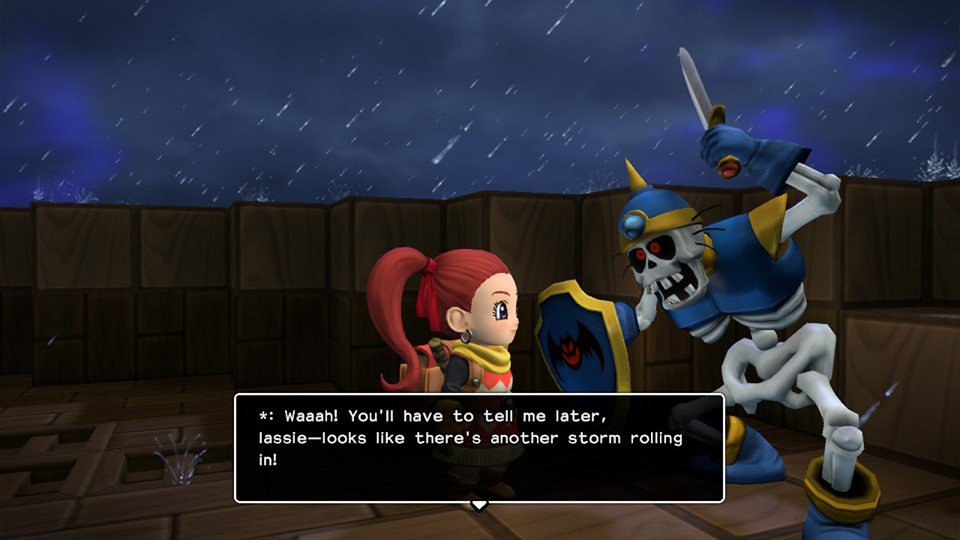 For the most part, Builders 2 feels a lot like builders which is a good thing. There’s an immediate sense of familiarity as you pick up the controller and hop to the tasks given to you. One thing, and maybe it is for the demo, maybe it’s permanent, but it seemed like equipment had no durability bar. If items are permanent that would be a nice touch as honestly, having to carry around spares of each could be a pain especially if you were far from “home” and needed the space to carry resources back before unlocking the giant chest that could be accessed from anywhere.

Now where lack of durability would be neat, it isn’t a game changer like finally being able to simply move something that you’ve misplaced. Starting off on that said pirate ship, you are given gloves that allow you to move things instead of having to destroy them. Certain items that you place are heavy and hard to destroy, or in some cases before you get the right tools, impossible to destroy. So now just being able to move those blocks, or barrels, or crates, makes it all so much easier to manage.

Also making life easier is that now your weapons and your builder’s hammer are two separate buttons. Running around you can get into a fight without having to worry that your going to hit an enemy with your precious hammer that does less damage as it’s designed to destroy the environment, not your foes. As for your hammer itself, and we’ll also see if there’s durability later down the line, is the new feature of being able to press and hold the button for continuous swinging instead of having to press it every time you want to swing. Just this alone is amazing but it did shift the buttons around a bit so there’s a bit of getting used to there. 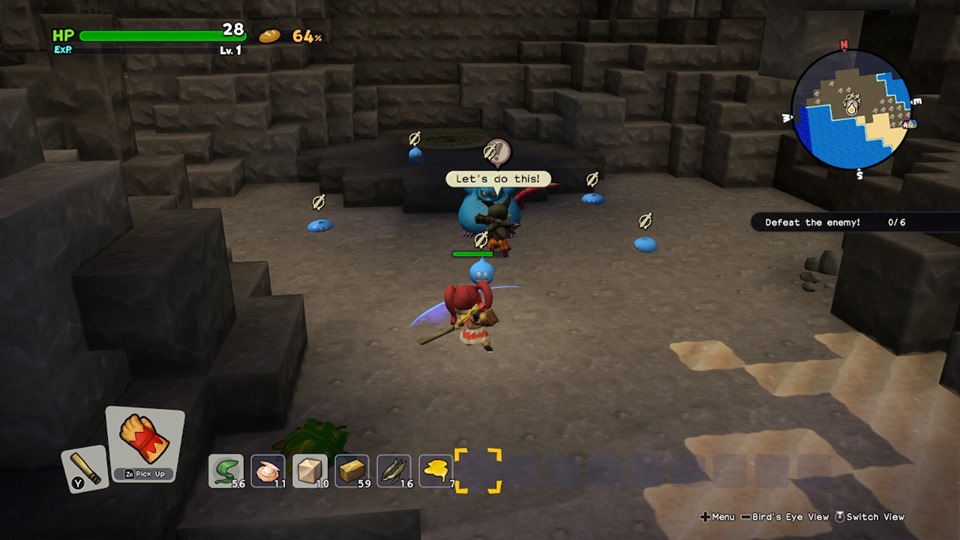 While not particularly “new”, having a partner along for the ride has definitely been given an upgrade. Not really knowing how he came around, is a demon looking man by the name of Malroth. So here’s something a little interesting. Malroth is the name of the demon that Hargon summons into the world after you defeat him in Dragon Quest II. He’s the final boss and a God of Destruction. Now while your human Malroth has a knack for wanting to put things out of their misery as he’s basically your AI bodyguard / bruiser, I’m wondering if the lack of his memory is because he is the God of Destruction just in human form. Either that or a part of him. This I definitely need to know more of.

History lesson over, the reason while Malroth is an upgrade to the whole thing is that while he can go about knocking the crap out of monsters, he can also within a radius of you destroy and pick up things like wood, kelp, or vines if you’ve hit them first. I say hit them first for vines because they are used to climb up so it was a nice touch that Malroth didn’t go straight for those. Anything he takes out though goes straight to your inventory so you never need to worry about doubling back to pick it up. Finally, you can give Malroth better equipment like an oaken club to start off. Items in the build menu will tell you if it’s only for him so that’s also going to be a neat feature going forward as you won’t always be alone.

Newly added is also more water controls. You can now swim so there’s no fear about getting your feet wet as you can dive down to find materials that you may not find above water. Water combat will be interesting to see but I didn’t get the chance to experience that one yet. Just knowing that they’ve put the effort into the water since the first trailer was dropped was enough to get me excited for the second chapter but really being able to see how well it works makes me excited to see just how far it can be taken. I. Want. Waterfalls in my city!

For cities themselves, you don’t really get to get that started per say. I mean you can as just one quick look at the “Pinterest” board and you can see just what people have already done with it. It’s seriously spectacular to see what’s already been done. So for the demo, you aren’t really allowed to leave the island. Once you’ve gotten your hammer and the quick tutorial on it, a ship captain shows up and tells you that he can bring you to other islands that you’ll need to visit for materials that cannot be found on this one. Getting excited to see just how far the demo would go, there was immediate disappointment as this was the end of the line as he asked if I wanted to go to the eShop and buy the full version for when it came out. 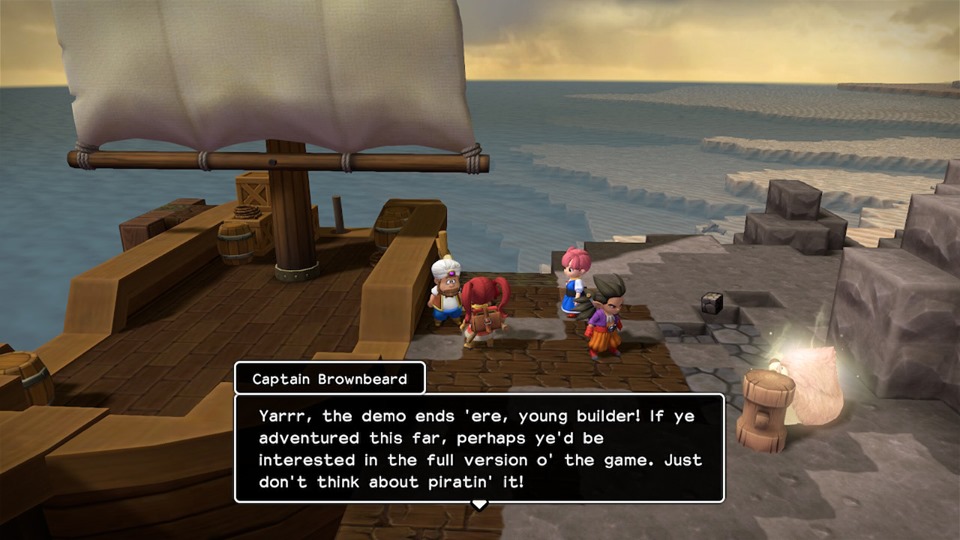 While I told the captain no, that’s only because being a smaller site and not on Square Enix’s radar I’ve already picked up the full game and the season pass as a form of birthday present to myself. So while the demo pretty much wrapped up here, I’ll be back in the week after launch for a full review as I’ll be playing from the moment that the clock hits twelve on July 12th.