Conan Unconquered, given its development team’s pedigree, is a solid RTS that should tug at the heartstrings of those of us that grew up in the era of Command & Conquer, WarCraft: Orcs & Humans, and Dune. However, with Conan Unconquered there is a break in the age-old real-time strategy genre. Bringing in interesting elements to a mode of real-time strategy that was popularized by the release of The Are Billions. Adding new elements, such as heroes, Conan Unconquered has brought something interesting to the horde-mode style of RTS that has seen popularity. In fact, it may even be enough of a shift that it could do what WarCraft III: Reign of Chaos did with its expansion of hero characters in a real-time strategy title.

If you are one of the few that have yet to experience this new trend in real-time strategy, I strongly urge you to pick up Conan Unconquered. Rather than the atypical turtling or base-building found in more traditional RTS games, you will find that scouting and army management are the core focus. Why? Because you will be assaulted by hordes of giant scorpions, spiders, humans, and lord knows what else from Robert E. Howard’s brilliant universe. 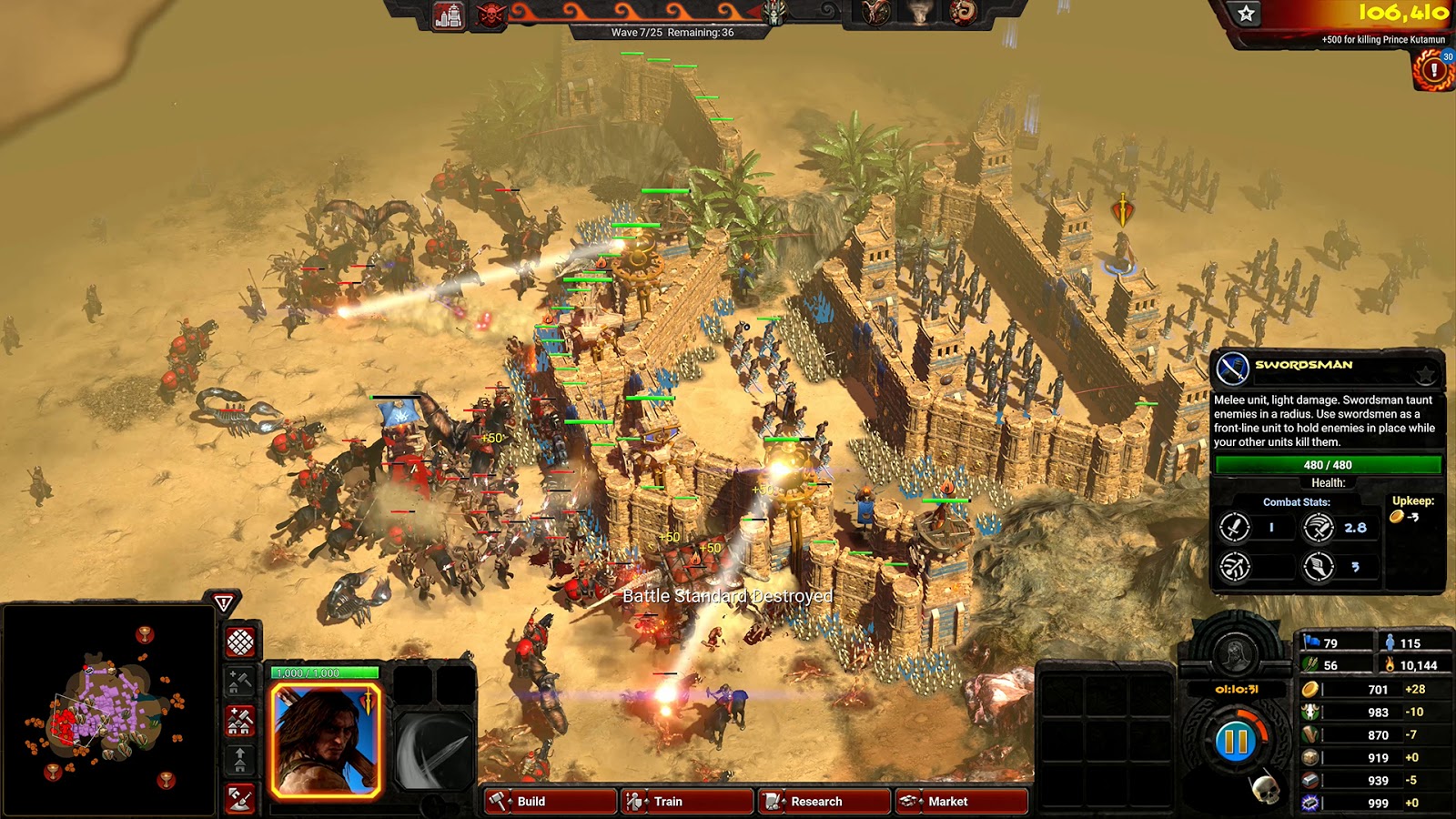 Conan Unconquered is, ultimately, a simple clone of They Are Billions, changing minute things like how and where resources can be gathered, unit balance, and overall appearance. However, that is not to discount what CU does, as it introduces the use of hero characters, two to start and as you continue forward you can unlock more, each with their own unique combat styles. I naturally enjoy using Conan because, be real, he wields a massive sword and smites his foes with mighty swings. What is not to love?

For starters, something you might not love is the sheer size of the User Interface; it is ridiculously massive. Now, I get that screens/displays can get to huge resolutions, but in a game designed specifically to fight off waves and waves of enemies, where you need to meticulously manage your real estate (since it is absolutely at a premium in horde-wave style games) and guide your armies to precise locations. Instead of seeing this wide field of view, you will spend your time panning all over the place. Add in the crazy (yet awesome) dust storms that appear, it can get downright frustrating because of all the panels all over the place.

A comparison to They Are Billions is inevitable, and while Conan Unconquered feels a bit like a reskin at times, there are some interesting new elements. Weather being one of them; as you are working on gathering resources to fuel the defense of your encampment, dust storms will approach that severely limit your visibility, and worse yet, remove the ability to tell which direction the horde will appear from. This information is key to survival, since in early games you will not be able to have a huge force behind each wall of your city. This means you will need to frantically pan around the map trying to determine which direction they are coming from. A tedious new mechanic, but the spirit of it is there. In late game it is less of an issue, given the ability to field more units, but early game? It can be absolutely devastating.

All said and done, and though lacking in any real creativity outside of a few aspects like hero units and weather, Conan Unconquered is a wonderful horde-mode real-time strategy game. Following a campaign that moves you through the various stages of surviving in the wastelands, Conan Unconquered’s campaign is really just a matter of training for the skirmishes that you really should get into, because that is where the real fun begins. An unfettered and uncontrolled sanctuary of chaos, this is something I imagine is absolutely perfect for Conan of Cimmeria and his band of raving mad lunatics. While there have been one or two Conan games in the past, it was not until I sat down and sunk 30 hours into Conan Unconquered that I realized that I truly felt like the ancient barbarian. That? No simple clone of another game could do that, and the feeling of being Conan is truly unique.

While it is no genre-defining title like Command & Conquer, Conan Unconquered is more than just a worthy successor to a team of developers known for their storied past. Excellent graphics, if troublesome user interface, and a pacing that will have you both glued to the seat and your heart beating with the very drums of war. Conan Unconquered should without a doubt, be in every RTS fan’s library.