Do you like giant mechs? Do you love explosions? How about beam swords? Well then, we may have found a game for you!

Project Nimbus follows the exploits of two young soldiers who are the new recruits in a private military company. One a wisecracking mech pilot, the other a young Japanese girl. Presumably together they pilot a new mech and do aerial battle with terrorists, their combat units, and other mechs! Set in a futuristic world following the nuclear fallout of another world war, humanity has been relegated to the skies on floating cities in order to live. There are factions nipping at each others heels, with two main factions having a cold war, and the third faction is the terrorist organization “Children of the Fallen Nation”. It’s a world of danger and combat, and you’ve got to make your place in this world.

The game is split into segments with individual missions in each segment. While these missions are generally “destroy all the enemies”, they do have a bunch of variation, with there generally being some sort of additional requirement, such as only having the beam sword available. So off you go in your mech! Shooting, slashing, and dashing your way through enemies. 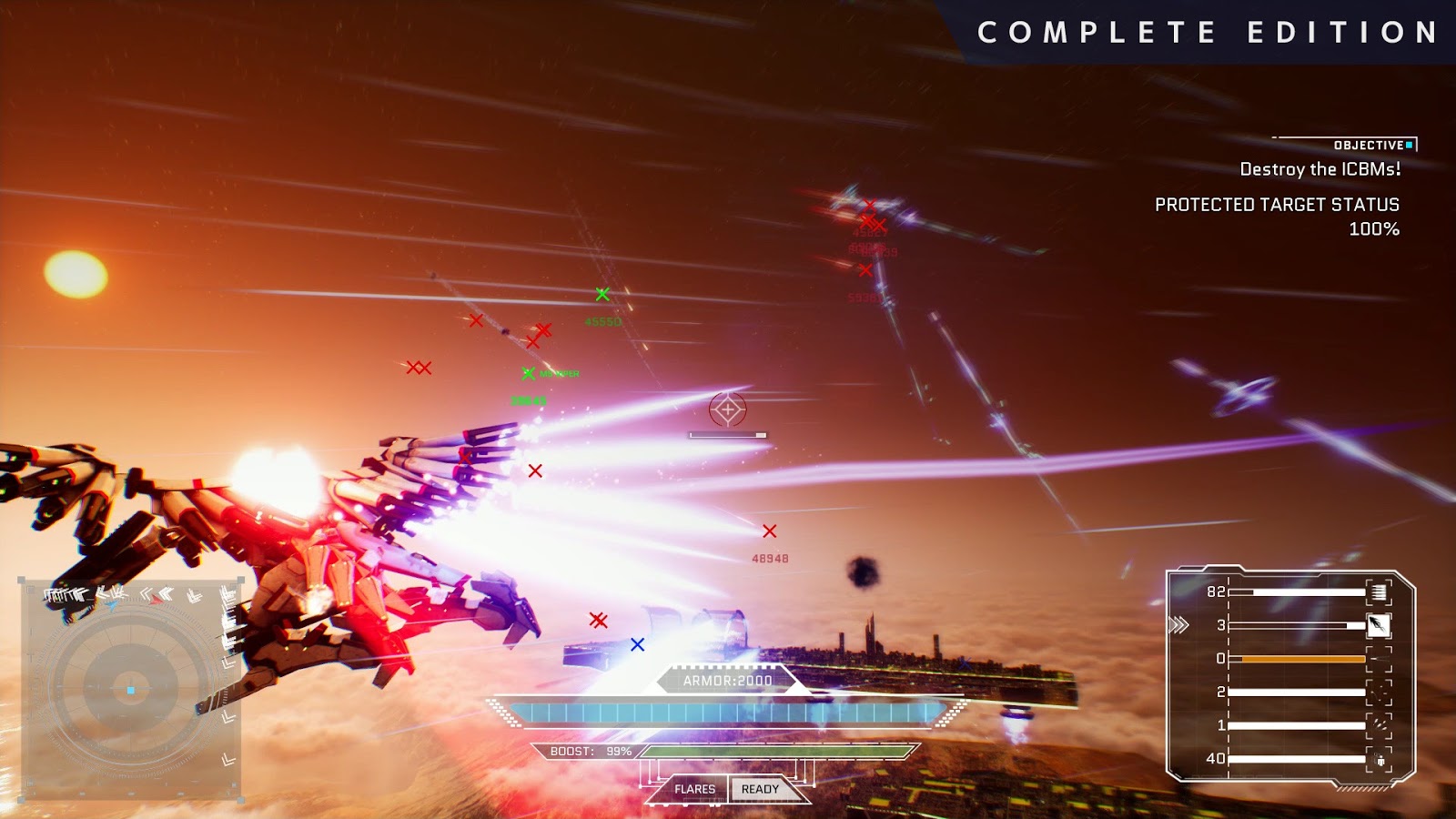 If you’ve played games similar to Armored Core, you probably know what you’re walking into. You have a slew of different weapons available to your mech, mostly some form of rocket or missile and a machine gun. You also have a handy energy blade. Unlike Armored Core however, you have unlimited ammo, but you do need to reload every so often, which can be done either manually or automatically if you run out of ammo in your clip.

Your blade is always equipped as long as it’s available which is super handy, but be careful with it, as you do a sort of dash boost into enemies before slashing if you’ve locked on, which usually mean dashing right into enemy fire, but can be quite useful for dispatching the smaller enemies. That dash however is probably the most integral part to surviving your battles. Not only can you dash in any direction you can point in, but it’s pretty much the only really consistent way to dodge enemy missiles. Which are awful by the way. You’re supposed to have a flare that you can drop to draw the missiles away from you, but I found it to work maybe a quarter of the time. Thankfully you can hold boost down to nope right the heck out. You do have a limited amount of dash, but your dash will come back over time.

You have quite the arsenal at your disposal, with a myriad of different weapon types, all situationally useful and most being just generally useful. You have a machine gun, a railgun, homing missiles, drones, and rockets, all of which behave differently. There’s a quick swap option as well as a quick select wheel that slows time slightly while you’re selecting, which is really good since you’ll probably be super overwhelmed for the first while after being introduced to the gameplay. Seriously though, it can take a while to get used to, especially since the game can be rather fast paced if you’re in the middle of a group of hostile enemies.

There are three different difficulties to try if you’re looking for a tougher challenge, a wide array of weapons to play with, and an endless wave mode and “mini campaign” for added entertainment after you’ve finished the main campaign mode. While you don’t have the ability to customize your mech, your wide variety of weapons and being forced to “make do with what you have” was something I was actually more endeared to.

Overall I was pleasantly surprised by Project Nimbus. I went in expecting mediocre, and I came out with better than average. If you’re a fan of giant robots and 3D aerial battles, this is definitely something you’d want to check out.