You are reading
Satisfactory – PC Review

Satisfactory is a 3D version of Factorio, which is to say that both are efficiency building games. I had discovered its existence through friends and signed up for the closed beta. Since I took a look at the title so close to the closed beta time frame, I didn’t think I’d get a key, yet somehow I squeaked in. I found that after playing through that version of the game, I do not regret my decision to give it a try (especially since I’m not always keen on open world games with no story to accompany it.) And despite the fact that Satisfactory has had some interesting issues in its multiplayer version, I’ve enjoyed hours of endless gameplay refining and perfecting my factory’s efficiency.

At the beginning of the game, players are dropped onto an alien planet to build a factory and provide data and resources to the home office. This is achieved through FICSIT and the Space Elevator, which both ship resources off into space. The premise is simple. Make things, ship things, make bigger things, repeat process. (For now…)

Satisfactory is what you make of it, which is to automate the production of materials to gain access to other buildings, and hopefully not die in creative ways. And believe me when I say there are creative ways to die in this game. First, there are the creatures that will attack you like the Fluffy Tails (although, I wonder about that name since these creatures are not particularly fluffy…) Second, there are poisonous clouds that players can encounter. Third, players can easily fall off various cliffs and buildings plummeting to their doom. However, the most creative death I’ve ever seen can be observed in this lovely Twitch clip. (Yes, I was in the game and was watching from the ground. The streamer and I were doing our regular co-op stream, so I clipped it. Enjoy!) 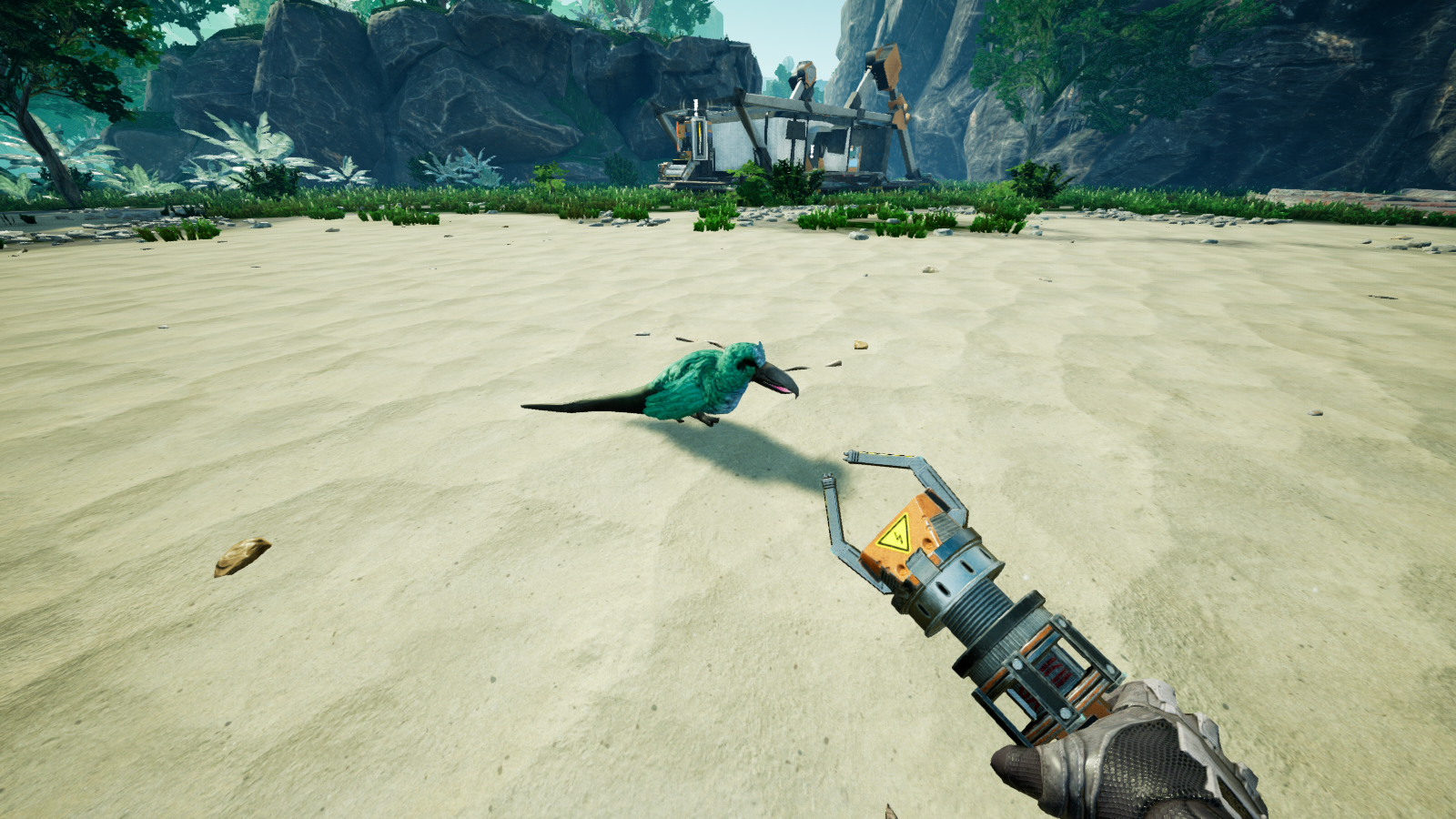 There are all kinds of things that players get access to in Satisfactory. Recently, the game received an update allowing players to use trains! Since I have not reached this tier, please check out the most recent update video that showcases the new content like the aforementioned trains, nuclear power plants, and updated map areas. Also, patch notes for this update can be found here.

Players are able to customize their train systems with the use of switches and factory design. That said, trains are available at Tier 6 and are expensive, but will be worthwhile when the tier is reached. At tier 7, the nuclear power plant and waste facility become available, along with a few new resource types.

At this time, Satisfactory does not yet have a complete narrative, very similar to the early access progression of Subnautica. However, on Coffee Stain Studio’s public road map they have listed plans to include a full story for the game. There will also be modding capabilities, more crafting tiers, and much more features to be added down the line. For a game that is priced at $29.95 USD, Satisfactory provides hours of content to enjoy.

Since Satisfactory is only available on the Epic Games store (spare
me your complaints), it has standard keyboard controls and no controller capabilities. So, the keys used are the standard WASD
for movement, C is used for the scanner, Q accesses the building menu,
F demolishes structures, V is used for the flashlight, X accesses the mailbox and tutorial information, and Tab is used to access player inventory. Buttons 1 – 9 can be changed to suit a players needs and when constructing buildings, there are a variety floor sizes and wall
types to choose from. At later tiers, there is access
to walkways and transportation methods which sometimes cause interesting
graphical issues. (This is a point I will address later on.)

If there was any gripe about the building in this game, it would be that at the beginning, items are crafted manually, meaning players have to hold down the mouse button for a lengthy periods of time. (This is me saying WTB “craft all” button please!)

Outside of that, there are various tools that are used to scan for objects and ore deposits on the planet, weapons to use against the alien lifeforms, and neat footwear that allows players to jump higher and move faster. What’s not to love?!

The UI polished and lightweight, mostly appearing at the bottom of the screen, allowing players to see the amazing graphics. In fact, I’ve spent lots of time screenshotting various locations in the game because it is astonishing. And if the scenery isn’t impressive enough, some of the alien creatures are vividly brought to life, making the whole gameplay experience a breathtaking one.

As for the sound design, Coffee Stain Studios was on point with building sounds, creature noises, and music choices. There are only four songs in the official soundtrack but they create a lovely and relax ambience to the game – which is contrasted by the various demons, fluffy tails, and spiders. (I’ve thankfully avoided some of these so far).

Satisfactory’s OST, composed by Jannik Reuterberg aka Sleepers Delight, who is a freelance composer and sound designer that specializes in chill music – a genre of music I quite enjoy. He can be found on social media via his Soundcloud, Twitter, Facebook, and Instagram pages, so be sure to drop him a follow! 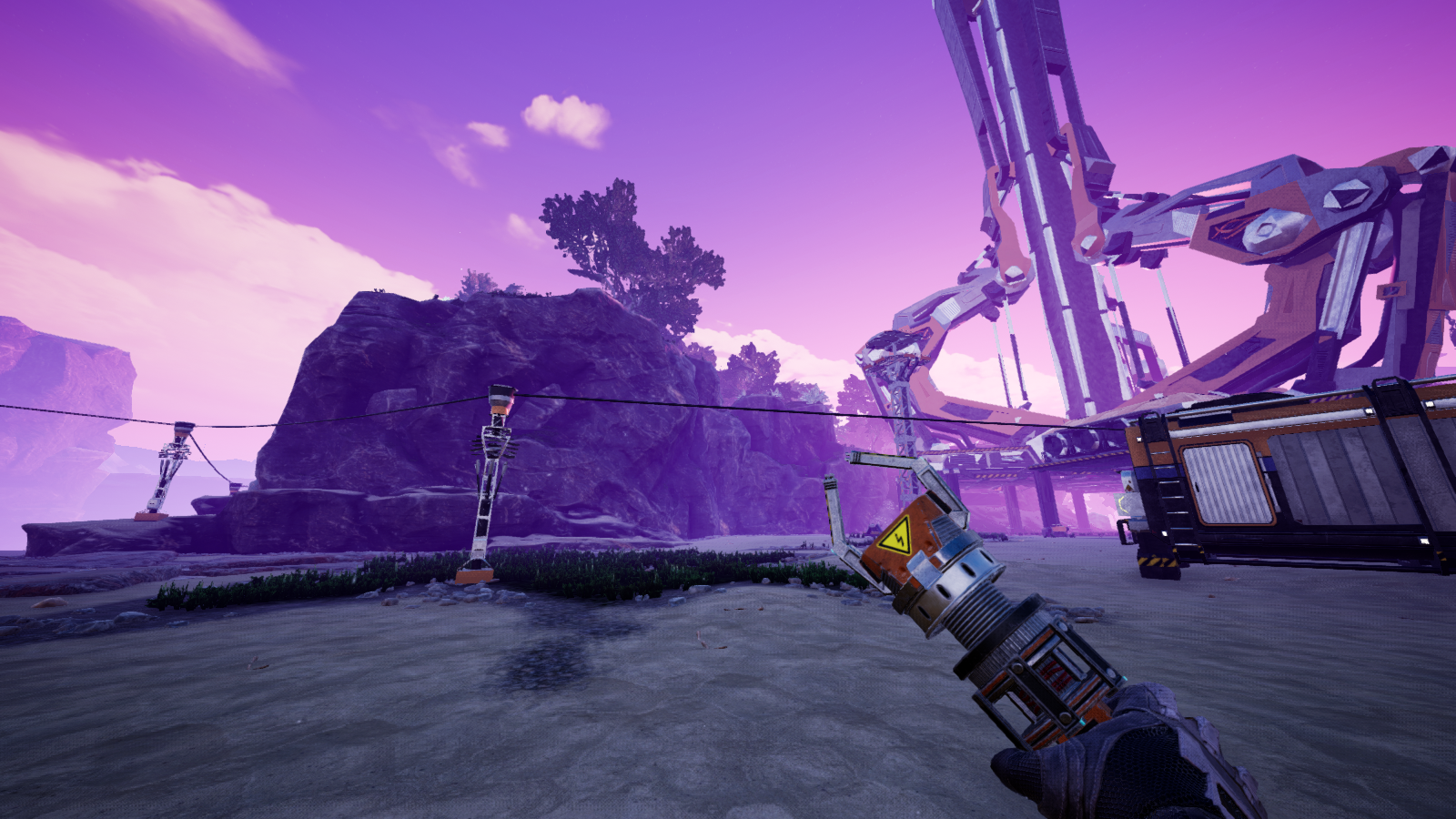 There are a lot of features to love about Satisfactory like its relaxing and casual gameplay experience, vast landscapes to explore and build, and multiplayer capabilities (up to four players). Stunning graphics and an affordable price point are all things to be happy about.

Down the line, the developers plan to input a full narrative to Satisfactory, as well as many other quality of life features which will improve the end user experience. (Although, even the closed beta version of the game was spectacular, in my opinion.)

In Short the Pros are: Most of the cons that I found were only present in multiplayer games, but that doesn’t take away from the enjoyment of Satisfactory. (In fact, in certain ways the issues added to the co-op experience.)

For one thing, Satisfactory suffers from the same issues that Astroneer does, which is that the multiplayer modes are established through a peer to peer connection. Often this means that issues with the multiplayer experience boils down to connection issues where objects might not show for all players. (Take a look at the screenshot next to this paragraph. The player could see the platform I placed where I could not.) Peer to peer multiplayer design also means that once a player logs out of the game, the players’ model remains. While this is not inherently an issue, it allows for some friendly casual mayhem among friends – which may or may not turn out for the best.

Furthermore, the distance traveled away from the main hub will eventually cause the game to lag, which is another issue that tends to occur with a peer to peer setup. Finally, when using some of the vehicles in Satisfactory, the game would show the camera angle from behind the it like the player was no longer driving. When my game had enough issues where I needed to log out and back in, my character ceased to have a head! (And yet, I could still move around. Yes, I have screenshots of this too…)


Some other cons include:

Satisfactory is an excellent factory building simulator that I absolutely adore. With a fully fleshed out narrative, some additional quality of life features, and multiplayer issues addressed, this game will knock several of its genre out of the park. Even with the issues encountered during the multiplayer sessions, Satisfactory earns a 9 out of 10 in my books. It's fun, beautiful, and create hours of enjoyment for players. I can't get enough of this title!