It would be easy to take a look at Fantasy Strike and assume that this is just another of the many ‘simple’ fighting games out on the market, but there is a lot more here than initially meets the eye. The dev team at Sirlim deserves credit for coming up with a control scheme that is approachable, but combatants that each have depth and provide plenty of replay value as well.

I have seen numerous fighting games over the last few years try to nail the angle of approachability, but very few actually do it well. A few basic moves are mapped to buttons, and the combat is really just a matter of jump kick, foot sweet, high kick, lather, rinse and repeat with cookie cutter characters who outside of a couple of special moves, really are not any different from any of the others. Sometimes there is an extra gimmick tossed in, like super-duper-hyper bars that let you kick off a flashy move, but those are usually pretty much all the same as well.

Now, Fantasy Strike is probably not going to appeal to the hardcore competitive fighting scene, because that group tends to like their complicated special moves and combos that help to separate the best from the rest. Also, while the characters all look nice enough, with big colorful designs and flashy animations, it is clear that this is not a AAA engine with lots of fancy moving parts in the background or pieces of hair or clothing that flaps in the wind. 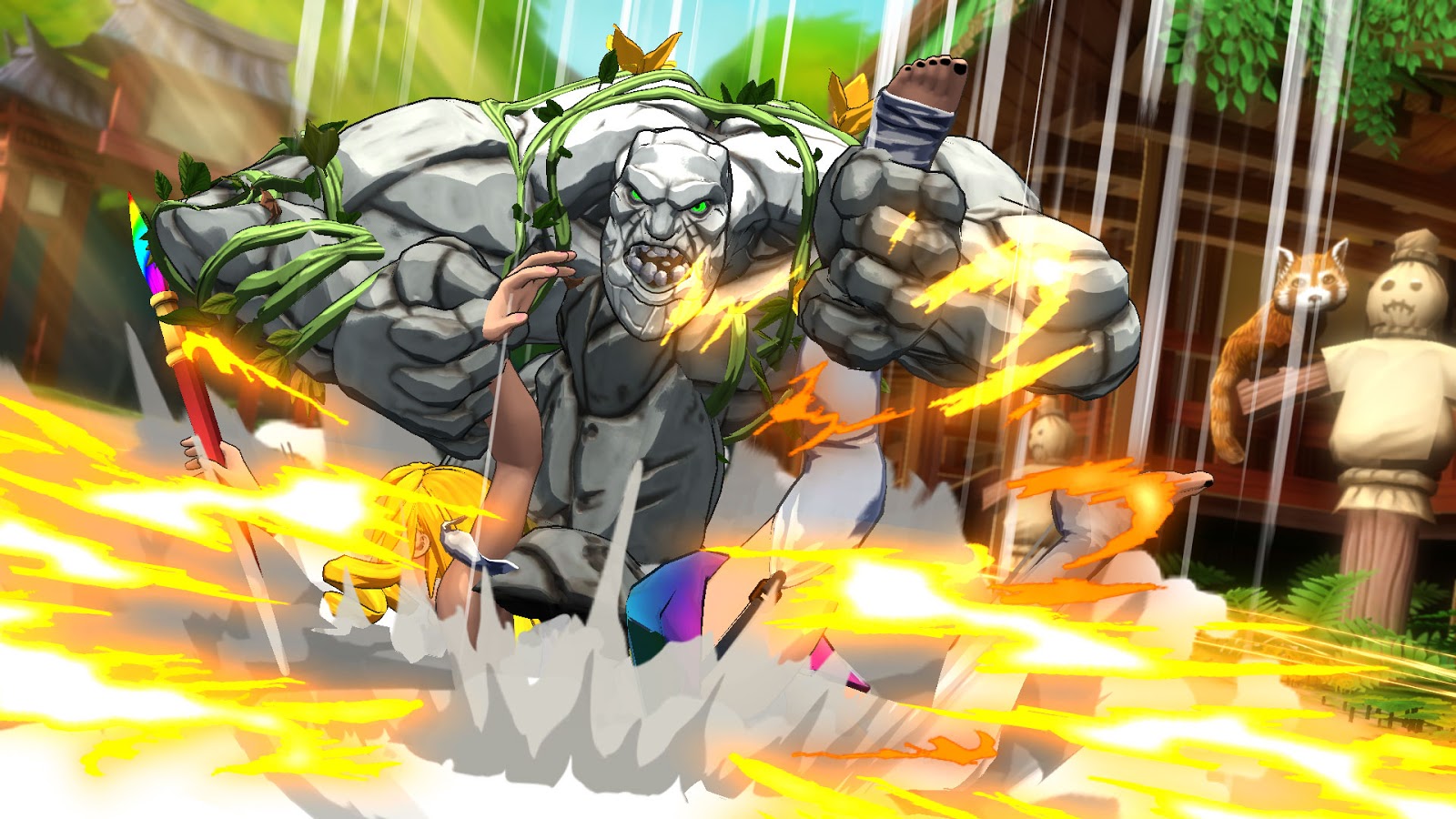 What Fantasy Strike lacks in terms of complicated special moves or challenging controls, it more than makes up for with character variety and pacing. The tutorial at the beginning is incredibly helpful – so don’t skip it. Quite often I can pick up a fighting game and hold my own without any practice, just because they all tend to be similar. That is not the case here, and if you try to play with that mentality, you will probably get crushed.

“But wait a minute? Isn’t that kind of the opposite of being an accessible game?” you might ask. Well, yes and no – but mostly no. The controls are very easy to learn, with attacks (and jump) mapped to the face buttons. There is no crouch attack so you don’t have three levels (low, medium, high) to contend with. Basically you have ground level and airborne to worry about. Instead it is about understanding the character you are using and the one you are up against. Some are ranged – and at first you might think: well that hardly seems fair pitting someone with a flaming bow against someone without ranged attacks. But you quickly start to learn how long it takes for a move to trigger and recover, or how you can string moves together, or how to jump or block while moving through the attacks. Some characters are built for grappling, others for quick in and out attacks and more. One of my complaints is when an entire roster of characters in a fighting game feels the same. The roster here in Fantasy Strike is not huge, but they all have a different feel to their attacks – both in terms of range and speed, and it works well.

So while the game’s controls are easy to grasp, understanding what tactics to employ against a particular enemy is where the depth comes into play. Will you be jumping over an opponent’s ranged attacks, or will you be focused on countering a throw-heavy character? Literally the way you counter a regular throw is to do nothing. No directional or button input – just stand there. Seems simple until you have to work that into the flow of the combat through where your default reflex is to pull back and block as the opponent in front of you starts to go into motion. Matches can end in the blink of an eye, with oodles of damage dealt out if you (or your opponent) are not careful. But, there are more rounds in a match than the typical best two out of three you see, and that allows you to come up with a different strategy with a whole new health bar. Still, the matches end at a pretty brisk pace.

So while the combat is actually fresh and interesting, the biggest concern right now is that there is a bit of a content gap. All ten fighters are thoughtfully constructed – but it is just ten fighters. The modes are also exactly what you would expect, from online combat to survival mode to practice to the story mode, right down to the annoyingly unfair final boss you usually see at the end of these. There is also online combat, and just in case it wasn’t clear from my earlier paragraphs, do not mistake accessible for easy. Granted, the computer opponents are a bit easier for me – they always are, but a skilled human opponent will still wipe the floor with you in under a minute if you haven’t learned how to best use your chosen character. 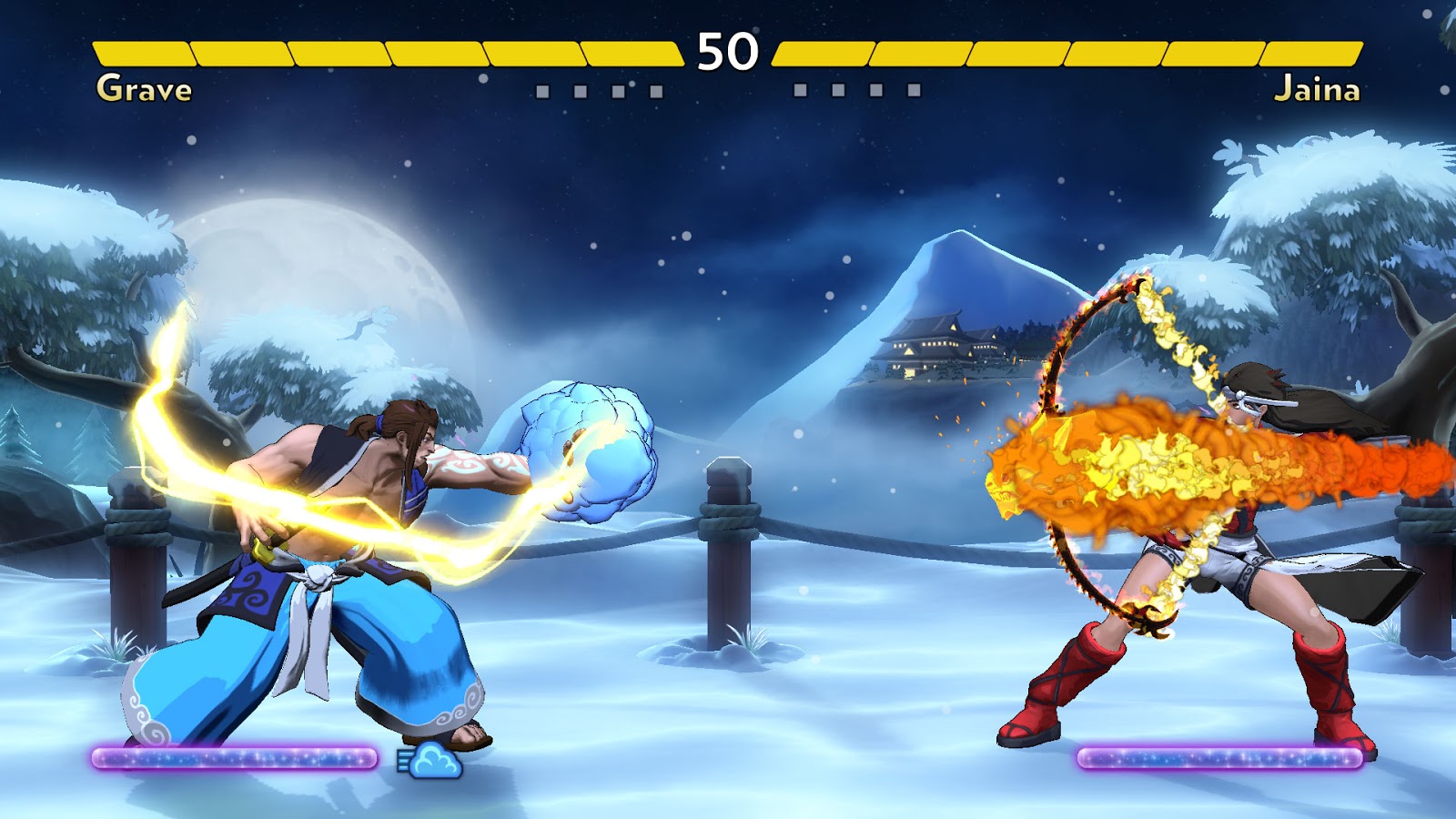 I think what I appreciate most about Fantasy Strike is that the developers set out for a specific task - make a fun, accessible fighting game - and did just that. It looks and sounds nice enough, and there is more depth than initially meets the eye, which helps as well. The primary quibble is the overall lack of content, but if you are just looking for a quick fighting game fix, Fantasy Strike should scratch that itch rather nicely.