You are reading
The Sinking City – PS4 Review

The Sinking City is something that I’ve been looking forward to for a long time. Developed by Frogwares, the makers of the most recent Sherlock Holmes title, you’ll be diving into a world already half gone mad. Put into the shoes of a World War I veteran turned private investigator by the name of Charles Read, you’ll be searching for answers to your own developing madness in a place that seems to be the root of it all. Having just gotten off a boat with nothing more than his bag and a pistol, it doesn’t take long to figure out that if you want answers to your madness that you’ll need to solve a lot of other people’s problems to get what you want.

I’m going to start this off by saying that while I enjoyed my time with my investigation of The Sinking City, I don’t think that it should have been an open-world. Set in the fictional half flooded city of Oakmont in the state of Massachusetts, you’ll be making your way both by foot and by boat in order to find the clues that you’ll need in order to get closer to the truth. The concepts are all there for an open world but it just feels empty.

While exploring the city you’ll be coming across plenty of closed off buildings that you can neither enter or scale up. The amount of invisible walls at times was shocking when all you would need to do is either hop a tiny ledge or grab hold of something just slightly above you. And most of the city is designed in this nature allowing you to actually go into very few places while you explore which was unfortunate because I was looking forward to exploring a wide open world, not one that looked open with most of its doors closed. Finally there’s the fact that often when you do get to walk into a building, it’s basically the same thing that you’ve already seen but with a hole in the floor or ceiling in a different spot. I get that a city generally has the same feeling spread across its districts, especially when you are in the poorer quarters, but it often just felt like more of the same and it because just routine to check in the same place for the often either overburdened or much needed materials.

That disappointment aside, where The Sinking City makes up for it is on the narrative and the piecing together of clues and the options that you can take to get there. Seeking your own answers, you’ll have to play nice with others that can either point you in the right direction or give you the answers that you are seeking outright. I quite enjoyed that nothing is given for free, nothing should be taken for granted, and finally, there are some seemingly rather consequential choices for how you decide that you are going to get to the answers that you seek.

From the very beginning you can decide as to whether you want to work with one of the wealthy “overlords” of the place or whether you want to tell him to go stuff himself and seek your answers elsewhere. First time in and wanting a bit more help from one of the city’s wealthy, I decided to play ball even if the ball game made me sick to my stomach as the guy is a jerk and I just wanted to punch him in the face. I’ll eventually need to learn where the other path leads me. 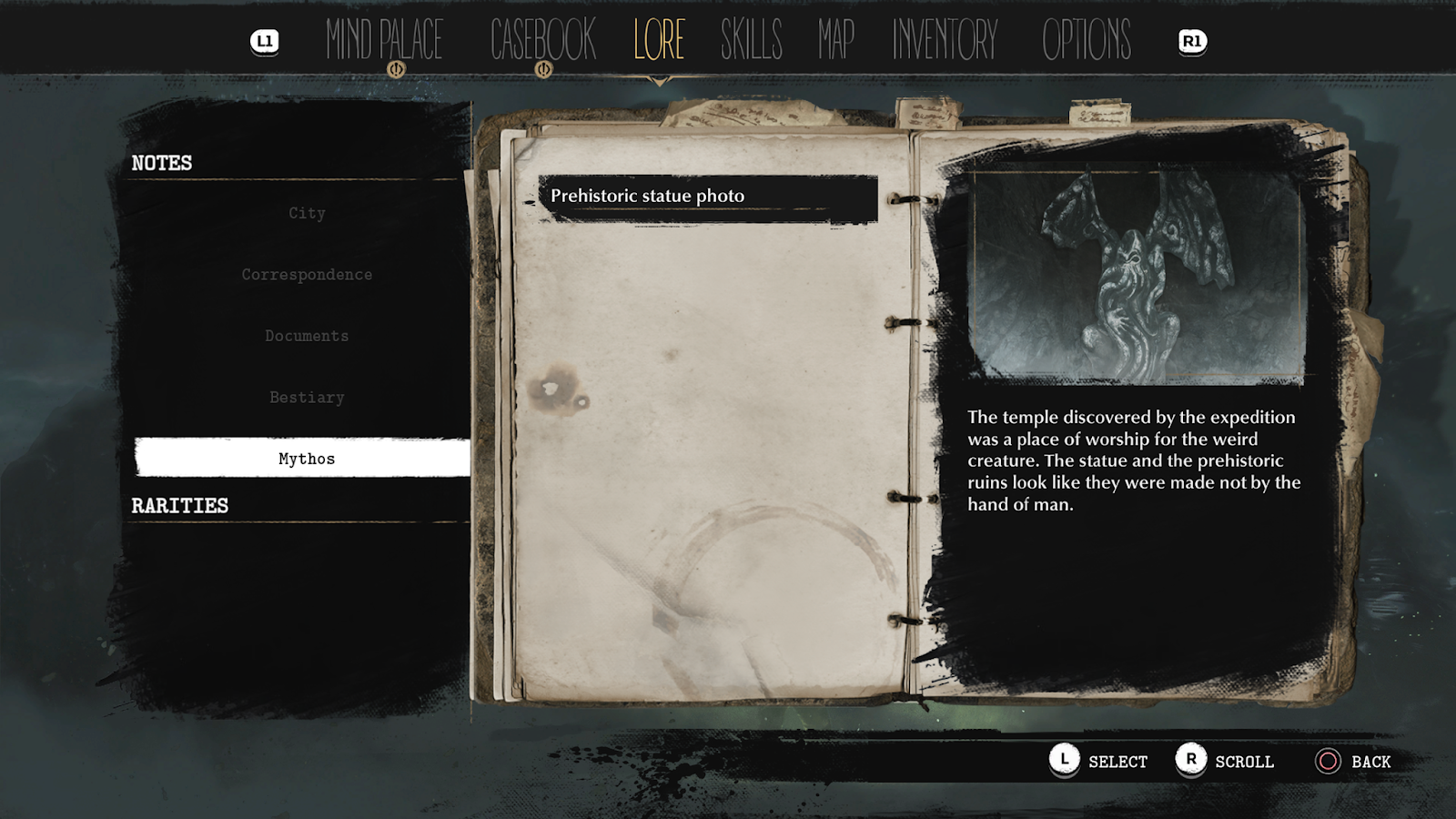 Following along the main quest from this set of decisions, I also picked up some other tasks, “side-quests”, that both help you better understand the overall situation that you find yourself in and give you a bit more to work with. In this city gone mad, you’ll more often than not find yourself making what you need as you can’t really buy it. Health packs, bullets, spring loaded leg traps and hand grenades, if you find the materials, you can make what you need. It’s not to say that you can’t just pick up bullets but if you keep waiting to pick them up, the monsters, which are quite real, will kill you. Over, and over, and over again.

This was something that I loved. The monsters? They are both real but also imaginary. While I thought that this would ramp up the horror aspect, me who is a grand self proclaimed chicken shit, was rarely scared. More often than not, the worst was the atmosphere when you were waiting for the other shoe to drop. Monsters with visual appearances that are basically nightmare fuel feel like they belong and often you’ll be coming across them more as an obstacle in your way than a representation of your madness that happens as you piece together events that have happened with the use of your “sight”.

Your sight has both the ability to pick up what normal eyes cannot as well as highlight symbols that have started to fade away. While using your sight you’ll move through the world slowly which while a mechanical element, helps to actually look around to see if there was anything worth noticing. With the world in the manner that it is, there are both spoken and written dialects for you to pick up such as the hobo marking that can help you determine if a door can be opened, if there’s a chest to be found or if there’s imminent danger behind door number three. Using your sight does have a drawback which bring us back to why I liked the monsters so much. While in use, your sight takes a toll on your sanity. The more you use it, the less sane you become from the current moment in time. You can offset this by either taking a break and letting yourself get a hold on reality, or there are some stimulants to help which you’ll need as seeing the monsters drains your sanity even faster. When your sanity drops, you start to see things and sometimes, the monsters that weren’t really there, start to appear and are just as real as the ones that you would normally come across. I loved this as it ties it all together from a thematic perspective.

Unfortunately when it comes to facing off against these monsters, you are more of an investigator than you are a warrior, even if you’re a WWI veteran and will often want to run from the monsters than face them head on. Even starting off with two separate guns, one 9mm semi-automatic and a 6 chambers revolver, you’re human and monsters hurt. This I could have made peace with but the controls for it are what get in the way. They feel clunky and unrefined often making me think of mid to late PS2 era controls.

So on a whole, while The Sinking City makes some great strides for investigative puzzlers, the open world that it tried to live in doesn’t really work. If you can get past the empty enough world and the clunky mechanics however, and there’s a gem underneath that is just begging to be explored and it’s worth the exploration.