You are reading
Professor Lupo and his Horrible Pets – Switch Review

Professor Lupo is a space scientist who has collected aliens creatures from around the universe on his space station. He is in the middle of holding an auction to the warlords and tyrants of Earth in order to pawn off his precious “pets” when the space station is attacked. You, the “intern of Legend”, promptly decide that this job doesn’t pay enough, and you really want to get off the station and head back to Earth. Unfortunately for you, the cages holding these seemingly harmless but incredibly dangerous pets have been opened in the attack, forcing you to navigate your way through the perilous creatures to make your way to an escape pod.

Prof Lupo can be played in primarily two different styles, or a combination as you see fit. There’s a mode where you point at the screen to interact with objects and another mode where everything is done through buttons. If you have the option, I highly suggest using the “pointer” option. Although I had a few gripes with it, for the most part it wasn’t too serious and it felt a lot more fun to me to point. This is probably because of how you go about getting through each stage. You have to interact with either control panels or icons on the screen in order to activate doors and devices in order to avoid getting killed by the monsters and to make it to the end of the level. 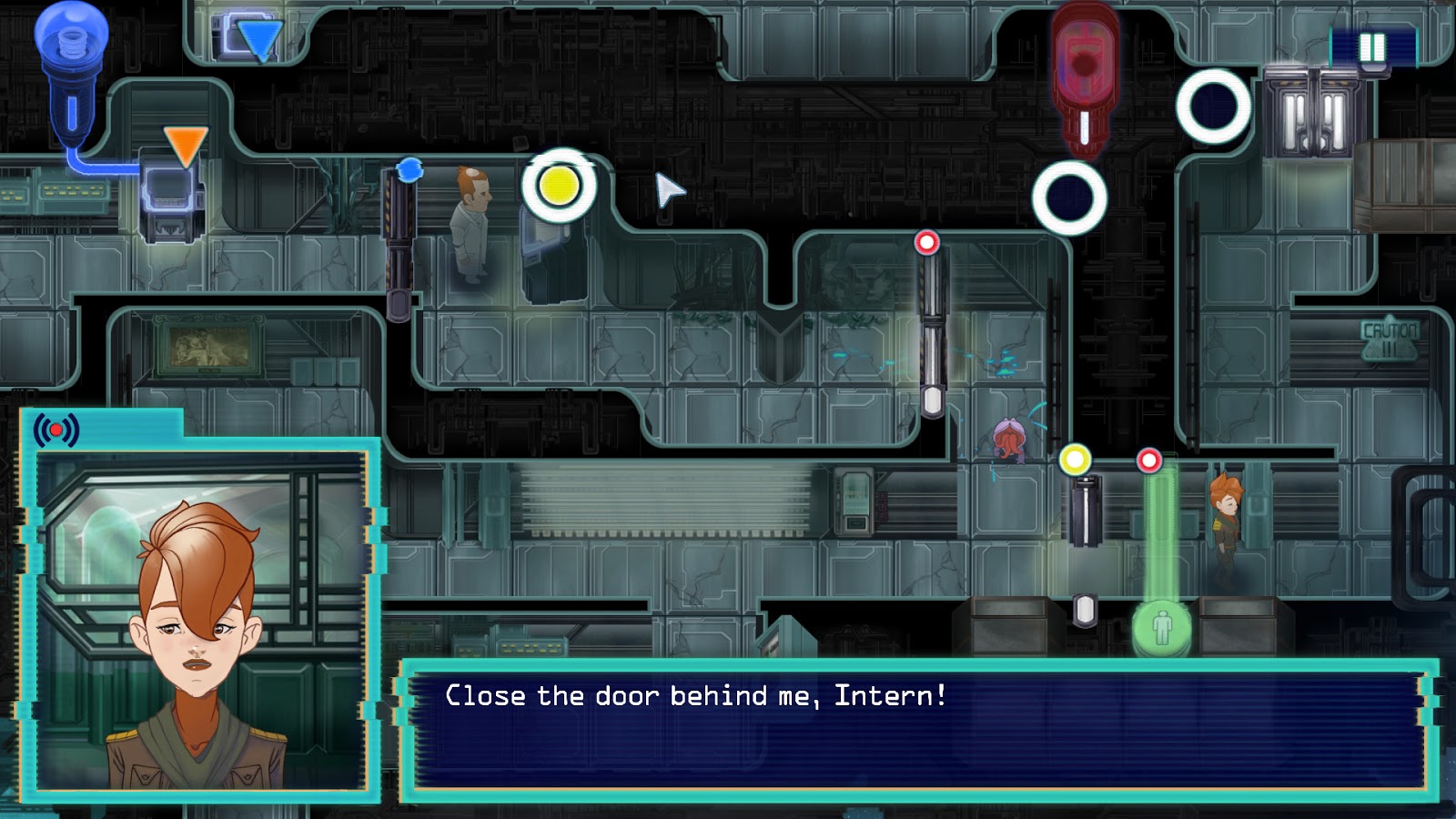 In pointer mode, you “click” on a tile you want to move to and the intern will move the shortest route available to that point, even if it isn’t the route you wanted. On the other hand, with the “button only” style gameplay you can’t really set the intern in motion, you manually push in a direction to make him move, meaning you can’t really focus on other aspects while waiting for the intern to move. Additionally so as you have to swap between what “buttons” for the doors you’re pushing, and it can get a little confusing pretty fast.

That being said, there isn’t really any major problem between either style, as long as you feel comfortable with it. You’re still avoiding the monsters, each of which have their own unique behavioural patterns, while trying, and usually failing, to pick up the bonus items that are litered throughout the level. While there are a few exceptions, the vast majority of the stages involving opening and closing doors and “running” (read walking) away from monsters. Each stage though is pretty unique in the way you’re expected to approach the problem, even more so if you’re also looking to nab the bonus items or complete the bonus objectives.

There isn’t too much to say about the graphics and music, other than it looks crisp and the soundtrack is generally quite fitting. The sassy AI Plato is great, and while the storyline is fairly typical, the monster designs are kind of cool. Each monster type behaves really uniquely, which gives rise to a bunch of different puzzle options, and solutions if you’re brainy enough. There were some points that felt like “guide dang it” moments, but I managed to get through the game, so at least they aren’t bad enough that they need some sort of psychic power to complete, although the challenging aspect is really a bonus for those who love these types of puzzle games.

While the walking speed of the intern is really slow, this just makes every decision you make all the more important. Opened the wrong door and let out a speedy monster? No way are you outrunning that. Got the door sequence wrong? Too bad, you’re monster chow. Even some of the early stages can get really hectic as you’re trying to dodge monsters and just barely getting away from them. 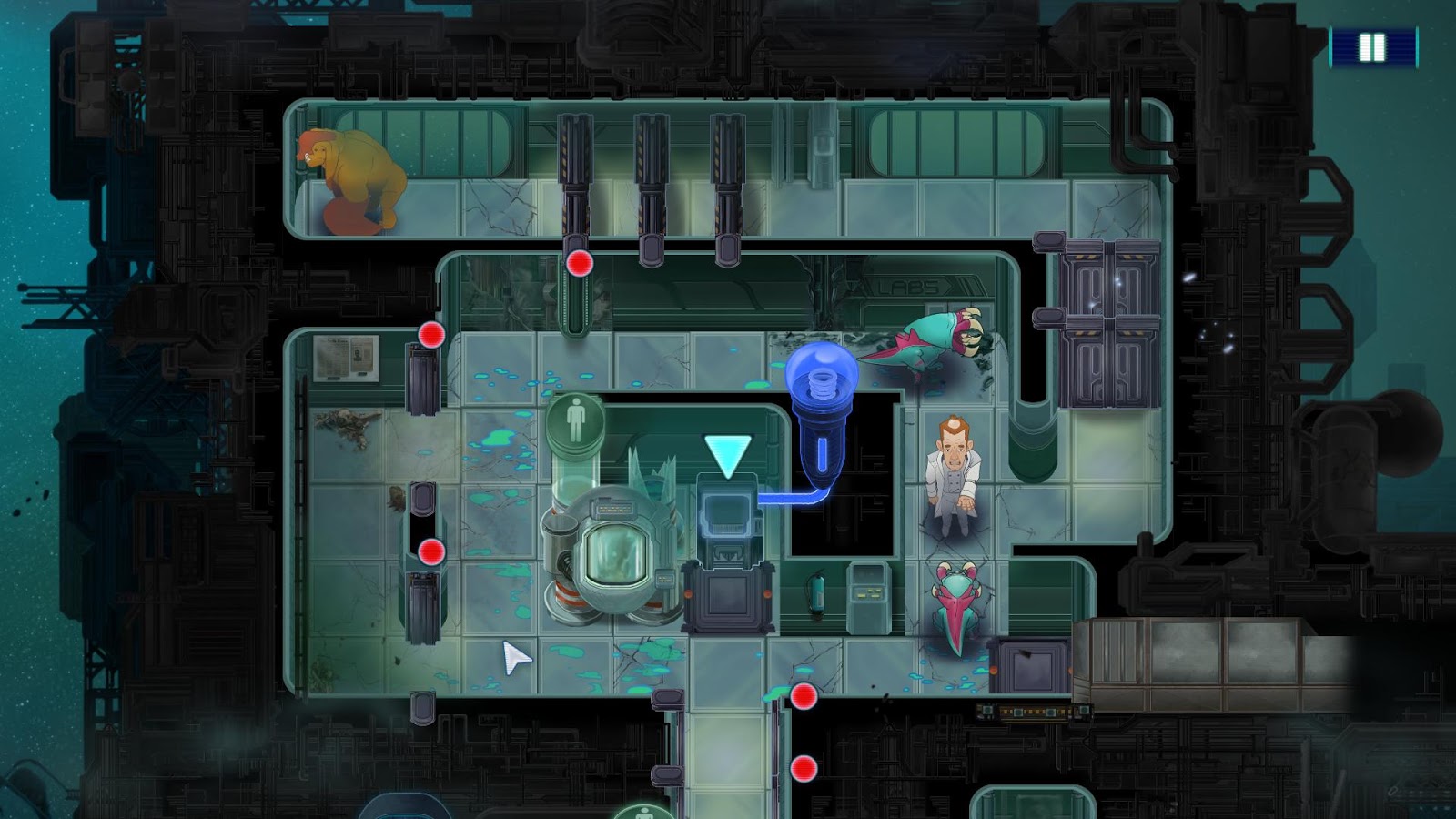 Overall, Professor Lupo and his Horrible Pets was a great puzzle game with a lot of nods to other games and movies, full of challenging quirky puzzles, a self-writing review, and enough bonus tasks to keep you fellow puzzle masochists happy. The story may be rather cliché, but it was written really well, and the quirky interactions and multitude of stages more than make up for it. If you’ve been craving a puzzle game to scratch that brain frying itch, look no further than Professor Lupo and his Horrible Pets.