If there was any point in time that I could get spoiled for Mechs, it would be the total of the last calendar year. Starting off with my birthday last year and getting New Gundam Breaker, there was also the recent complete edition of Project Nimbus and now the latest War Tech Fighters. Combining s bit of Armored Core with Project Nimbus’ free flying simulator combat, and your giant mech can dash, shoot, launch missiles hide behind a shield or slice a ship in half with a sword. What a time to be alive!

So after a starting mission in order for you to get your bearings, you’re brought to a hanger in which you’ll be spending a lot of time in as this is where your mech is stored and where it can be upgraded. The best part about the upgrades is that there’s something for everyone. Breaking it down into three categories, you have your light mechs, your medium mechs and your heavy mechs. Light can move about a lot faster but can’t really take a hit, heavy are slow but can take all of the hits, and the medium are somewhere in between the other two depending on which parts you equip.

The parts themselves are broken into the major segments so while there is customization, don’t expect nitpicky detail. This isn’t a criticism on my part as if I could control every little piece I would never make it out of the damned hanger to try to afford all of the parts that I want to have in my possession. The parts are divided into the head, the chest, the legs and finally the arms which are your main weapons. From those, you’ll also be able to customize a sword, shield and missiles. Yes you read that right. You get a sword on top of a ton of ranged weapons so at one point I was totally rocking a Heavy Arms from Gundam Wing with I suppose the Destiny Gundam’s Sword? 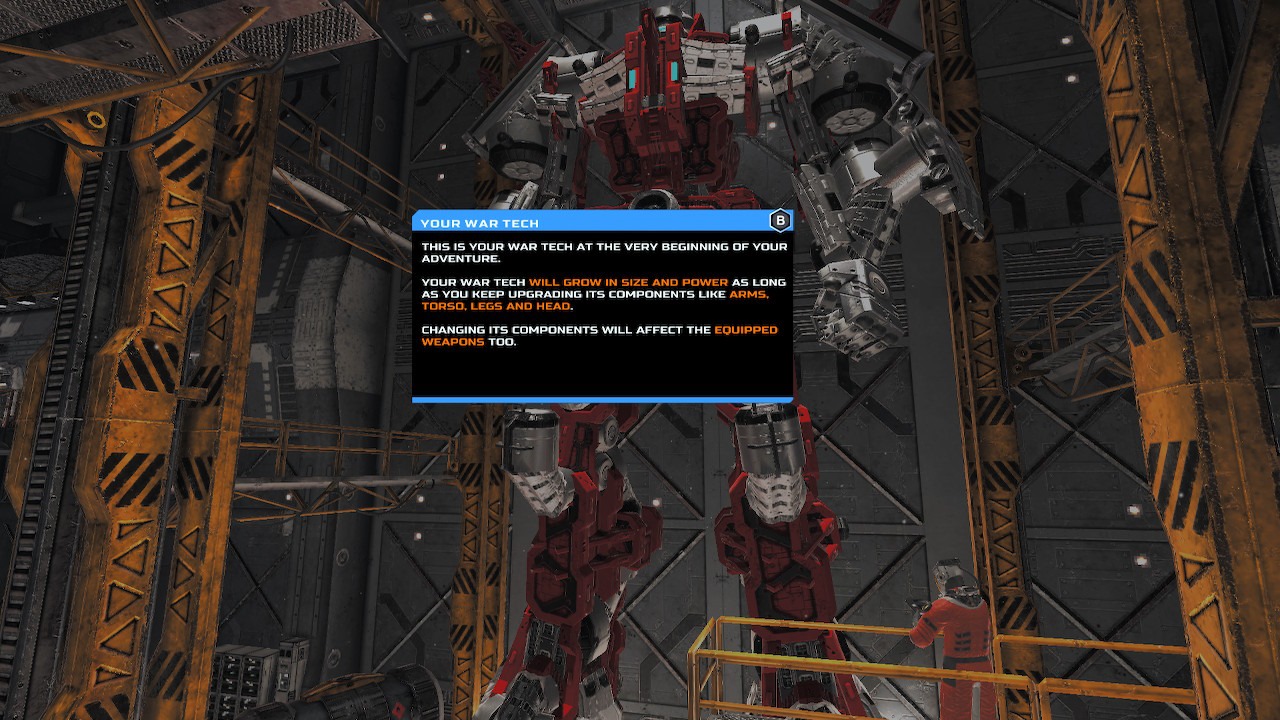 Once you’ve gone and picked your gear, bought and sold parts you wanted and no longer needed, painted your mech to suit your particular fancy, you can head out on new missions or missions that you’ve already done in order to gain more experience to level up. Launching out of the hanger like a Mobile Suit from Gundam or blasting off like Macross, you are thrown out into space for some seriously fun action.

Gameplay falls into three modes. Exploration and “puzzle solving”, long ranged combat and then short ranged combat. Exploration will have you flying around, avoiding mines, shooting down little things like sensors and then hacking your way into a data grid to find the information that you’re looking for. It’s easy but it often acts as the in-between for the seriously fast paced action that follows.

Long ranged combat is also squee worthy with how smooth it is. With every attack based off of an energy meter, you can shoot your lower damage but faster firing weapons, your slow but very powerful weapon or dodge around with your thrusters. Targeting is mostly automatic but you can lock-on to an enemy so that they become your main concentration. Locking-on will also help as while you’re firing at a powerful enemy you can also launch a barrage of missiles for loads of damage. If you find yourself under fire from the very same things though, you’ve got a shield that can be deployed in order to block it all. You can’t do anything else while hiding behind it, but at least you won’t be getting destroyed. 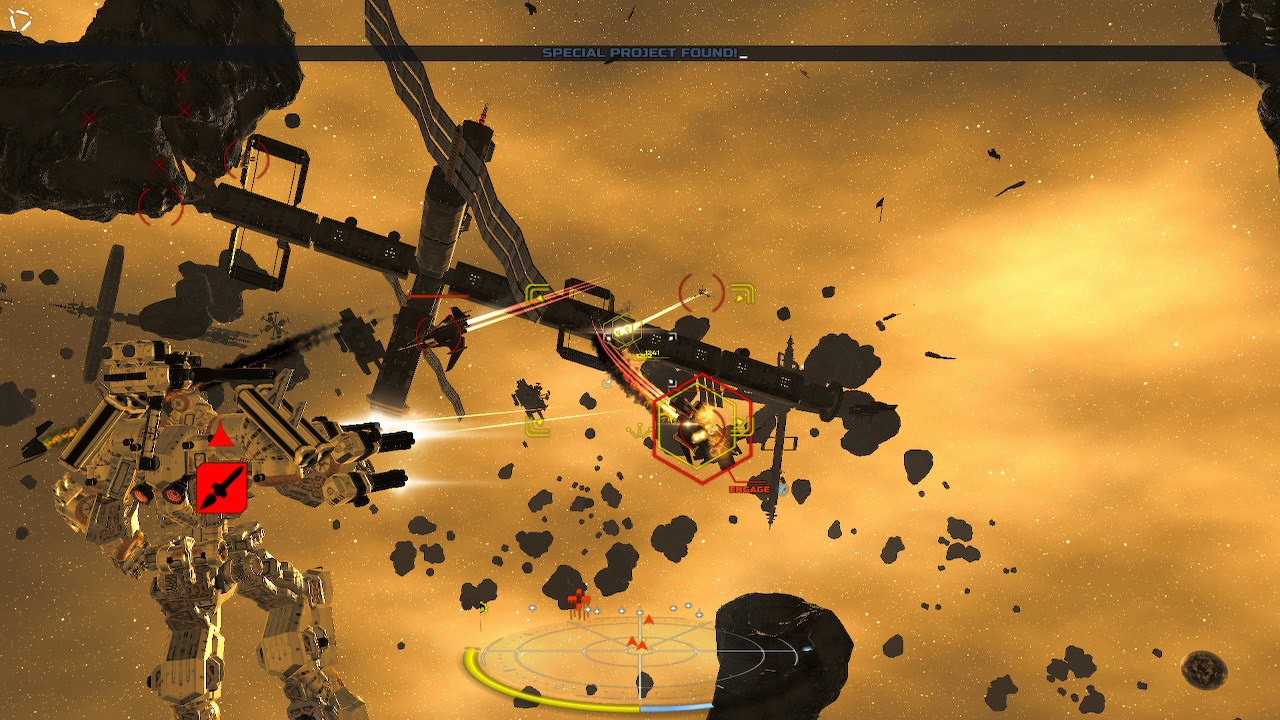 Close quartered combat is a bit trickier as you can’t just pull out your sword and go all Conan on your enemies. In regular times, CQC can be used when you get close enough to a damaged enemy in order to finish it off. Doing so with spawn an animation which sees your mech, punch, kick, stab or slice an enemy ship in half. The real CQC however comes when you go up against another mech as this starts a dual that closes up on the two of you.

When locked into combat you can swing your sword either quickly for more attacks or slowly with more power behind it for more damage. To defend yourself you can bring up your shield or you can dodge to the right or the left to then counter attack and deal more damage. Every now and then a spark will fly and then you’ll have to move your cursor into the middle to trigger a massive damage attack. Like long ranged combat with your guns, close ranged combat is just as smooth and loads of fun.

The only possible negative that I could have against War Tech Fighters is that moving up and down could have been a bit smoother when you were doing it manually to try to target something in your sights. When chasing enemies it’s damned near flawless. Manually though feels jaggy like if you were moving a specific value up or down with nothing in between for each increment. The only real reason you’ll even notice is in these moments because in the heat of combat you don’t even think twice about it. War Tech Fighters even works just as good in handheld mode as it does in the cradle hooked up to a screen. Sure there are long, and I mean LONG load times but once a mission has been started, there’s no more loading so if there’s a bit more time upfront? That’s fine 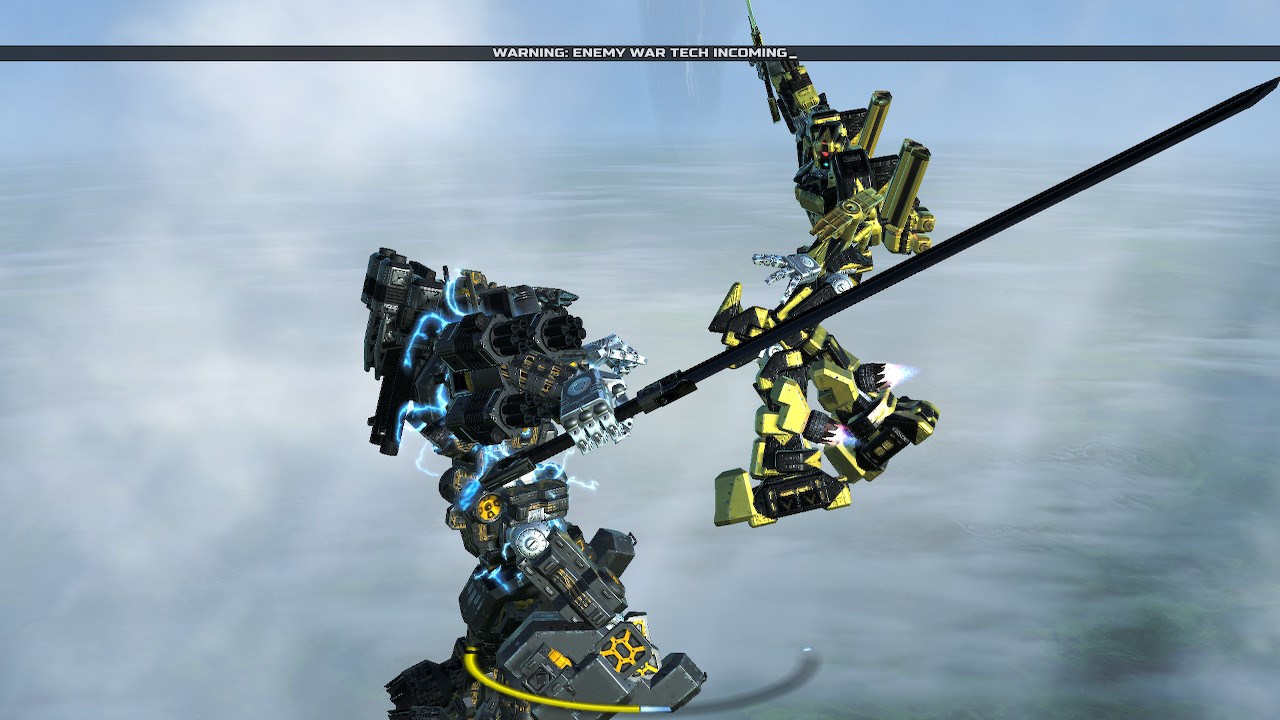 Overall War Tech Fighters brings about an amazing Mech experience to the table. With plenty of customization, missions, training and more, it won’t take long before even the greenest rookie becomes an ace as they head out into yet another mission.