I wish I could say that it was a good thing to write Jaggy’s Corner on a Tuesday but alas, that is not the case. And I wish I could say that writing for video games is always exciting and fun, but it’s not. Writers also have to pass along news like the passing of an important personality in the gaming community. While the hardest post I ever wrote was the passing of another notable gaming personality in Starcraft 2, this one is equally difficult. I, like many others, sit in utter disbelief that Geoff “iNcontroL” Robinson passed away on Saturday July 20th, 2019 at the age of 33.

I can’t even express how awful this news is, knowing that the passing of John Bain – an amazing friend of Geoff and co-caster in Starcraft 2 – only happened a year prior. They were both the same age when they passed. It’s a fact that doesn’t go unnoticed. You see, both of these men who were highly respected and loved passed away at an age younger than I am. Both of these pillars in Starcraft 2 and gaming helped so many people in the community. And both of them were the most generous and kind people; ones to be looked up to.

Having lost two strong personalities in gaming really hurts. I can’t even fathom what the heck happened, even as I watch the rerun broadcast of Geoff playing Apex Legends with friends on the same day he passed away from a blood clot in his lungs.

I’m going to take you guys down memory lane.

My first introduction to Twitch was through Starcraft 2. At the time, I wanted to understand the game that my brother invested hours of time playing. When it came to my brother and I with RTS games, I was better at Warcraft where he was better at Starcraft. At some point, I wanted to learn more about this game that my brother devoted so much time. He sent me Husky and Carbot videos which hooked me on the game. This led to my looking up information about build orders. I ended up in Demuslim’s Twitch stream. At the time, Demu was a professional player for Evil Geniuses and Geoff was the captain of the team. This is how it all started for me. Demu’s stream lead to everything. 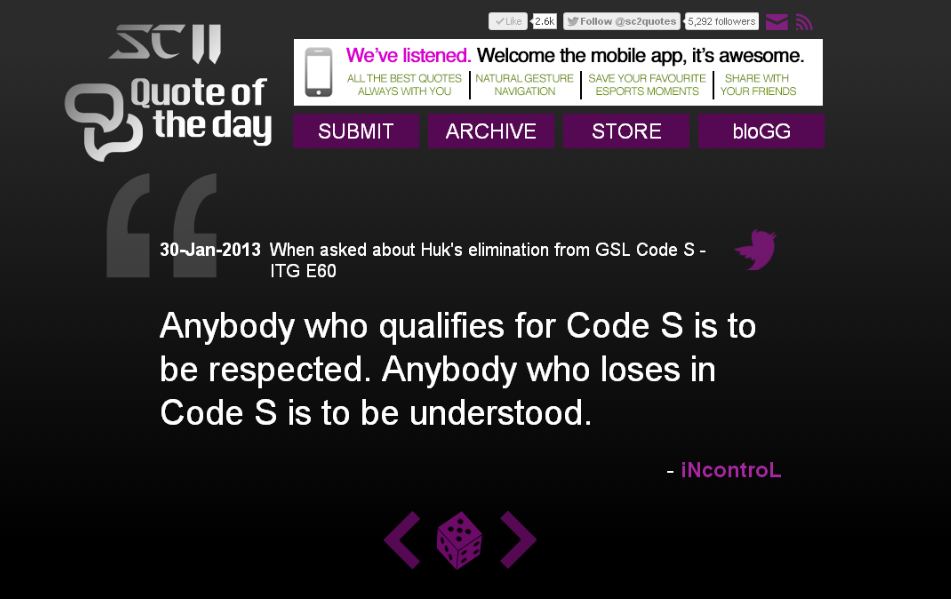 The way Demu would explain his thought process during ladder games put the difficult RTS into perspective for me, but it was the whole team that kept me invested in Starcraft. Specifically, Geoff’s sense of humor and calm demeanor caused me to consume all content related to EG in Starcraft 2. It eventually led me to LowkoTV’s stream where I ended up being a chat moderator for several years. And I was hooked after watching what became one of my favorite and goofy sponsorship YouTube videos with Geoff and Jaedong.

Throughout my time in the Sc2 community, I followed the careers of all the players. This lead me to State of the Game, which I only discovered closer to the end of its run. Two videos come to mind from that series; the first of which is Geoff telling the origin story of Whitera’s Special Tactics. However, my absolute favorite video moment of Geoff’s will always be the last episode of State of the Game where Sean “Day9” Plott laughed his guts out.

As an EG fan, I discovered what was known as the “EG Curse”, which was well known in Sc2. After players were recruited onto the team, they would start performing terribly. In the video below, Geoff talks about the “EG Curse” to a new player on the roster, and it still makes me laugh. Anyways, that new player went on to obliterate his opponents and ended up becoming my all-time favorite Sc2 Zerg player for many years to come.

I remember later on watching “Good Game“,
a documentary about the EG Starcraft 2 team, where Geoff had talked about pro
player Idra and his progression as an esports professional. One of the
things he said was that Idra’s reaction to esports fame and his terrible interactions
with fans made sense because he (Idra) lacked the same socialization
skills as others at his age. And it was because of this documentary that I really started to
both respect and understand the sort of person Geoff was.

While I never met Geoff, I watched his career over the course of 7 years (I know this because that is how long I’ve been following his channel. In fact, that’s right down to the month). And I recall clearly an interview with Cyan Esports. During the interview, Geoff said some very humbling things that struck me. In fact, I had tweeted about the interview a day after it went up on YouTube. Some of those important things were: “You don’t go to college and get an esports degree. You have to work for it. You have to ask people to do things for them in order to make it in this industry. Esports is about years of raw passion to carry you forward and then eventually there is a chance you can make a career out of it.” I was very inspired by that section in the video because at that point I wanted to be more than just a chat moderator. And while today this might not make sense because of how big esports are, consider that Geoff started in esports when there were no sponsorship deals, there wasn’t an esports work visa, and there weren’t courses in colleges and universities about professional video gaming. Geoff was one of the OG personalities from before all of this happened. And he started around the same time as notable casters like Artosis and Tasteless, or Day9 when he was still doing YouTube beginner videos. 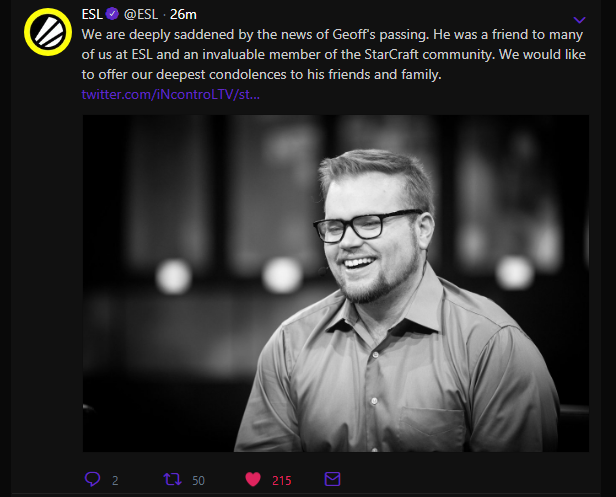 If I could remember where the story was told I’d link it but, Geoff had talked about his beginnings of esports. A friend of his took a chance on him by allowed him to live in his parents basement just to pursue the esports dream at a time when there was no guarantee of a career. You want to know why Geoff was a pillar in the community? That right there is everything you need to know, but I digress…

I only saw Geoff in passing once. It was at Dreamhack Montreal a couple of years ago for the WCS circuit. At the time, I was talking to Maynarde and ZombieGrub about life, traveling, if they were excited for the matchups, etc… I wasn’t doing an interview or anything, I was just chatting with them. This occurred before they would be casting all day. It was then that Geoff had walked by – a few meters away from me – and sat down on the couch behind Maynarde and ZombieGrub. I vaguely recall mentioning that I wanted to say Hi. Just once. My god, I wish I had…. Anyways, not long after that, the makeup artist swung by to prepare the casters for the cameras and I promptly took my leave. Throughout the rest of the event, I didn’t see Geoff in person again. I imagine he ducked out before people could swarm him. (I mean, that’s what you get for playing Protoss…)

Thank you for everything, Geoff. StarCraft won’t be the same without you. pic.twitter.com/zA7likyhf1

There is so much more I could say about Geoff, having watched his career over the course of 7 years, but all of it comes from the perspective of a fan, an observer, and a chat moderator for various Sc2 channels. Geoff was never a man that I knew personally, but he was someone integral to many people’s careers and to several communities besides Sc2. He loved tabletop games like Warhammer 40k, he played Dungeons & Dragons, he streamed video games like XCOM 2 without mystically raging, and he still managed to be an amazing role model for many people in esports. He remained humble and kept a smile on everyone’s face.

I can’t envision how the people closest to him are feeling right now – many of them are casters who are at events or at home streaming. I do know how some feel because of their posts like Nathanias‘ or ROOTCatZ’s, the Tweets, and the Video tributes. Nothing prepared me for Day9’s stream, clipped below:

Over the last few days, Geoff’s Twitch channel
has been playing rerun broadcasts of past streams. Many
people have stopped by the stream to express their thoughts and grief. If Geoff meant anything, perhaps stop on
by to share some memories with the community. We’re all trying to process and grieve a man who supported so many people in the gaming community.

Geoff loved his dog Barristan, his bulldog, so it stands to reason that he loved a bulldog rescue group. Consider taking a look at the SoCal Bulldog rescue that Geoff supported.

I have one final thing to say. Until next time Geoff. Please give John our love. We miss you dearly.