You are reading
Gloomhaven Releases in Early Access with Launch Trailer!

PARIS – July 17, 2019 – Asmodee Digital is kicking off Early Access for Gloomhaven today. The Tactical RPG game is available for $24.99 during Early Access.

The launch trailer showcases two of the four mercenaries available at the beginning of the Early Access as they face a Night Demon. Or so they thought… As players will experience in the dark fantasy world of Gloomhaven, “from gloom only greed & death emerge.”

“We’re absolutely thrilled to have the privilege of bringing Gloomhaven to Steam. It’s one of the most acclaimed board games and is a perfect addition to our digital catalogue,” said Pierre Ortolan, CEO of Asmodee Digital. “We’re working hand-in-hand with Flaming Fowl Studios, a talented studio whose vast experience includes the Fables series, and the original board game designer, Isaac Childres. Paired with our board game DNA and digital expertise, we are confident that Gloomhaven’s Early Access will allow us to build, together with the players, the best Tactical RPG experience for the full release.”

Gloomhaven, from Board Game to Digital: The Masterpiece of Tactical RPG

As a board game, Gloomhaven has raised $4.4 million on Kickstarter thanks to more than 45,000 backers. Designed by Isaac Childres, the Gloomhaven board game has been acclaimed by both players and critics alike, achieving the highest rating on BoardGameGeek and winning six Golden Geek awards, including “Board Game of the Year” in 2017.

The digital adaptation, developed by Flaming Fowl Studios, allows players to play as a squad of two to four mercenaries, in a world of darkness and trials. Its legendary unforgiving difficulty rewards only the sharpest strategic minds. Bringing the lore, game mechanics and identity of the beloved board game into the digital era, Gloomhaven will leverage all the benefits of the PC platform.

At the start of Early Access, players are able to experience a new exclusive Adventure Mode based on roguelike mechanics, combining both turn-based combat and exploration, with four mercenaries available at the start. The roster of characters, enemies and bosses, each including their own abilities, will expand on a regular basis during Early Access, along with additional environments, quests, items and more.

Players are able to experience the unforgiving world of Gloomhaven through different difficulty levels, delivering an optimal experience for beginners while allowing experts to use the original board game settings. The full Campaign from the original board game, along with the multiplayer Coop mode, will be available when the full game is launched.

Players who purchased the game during Early Access will not be charged extra at full release, when the game will be priced higher, thus being rewarded for joining Gloomhaven earlier and contributing to the game’s success.

Nightcrawler Scoundrel, the first of the four free skins for the Early Access starting mercenaries is also released today. All skins will be unlockable through challenges that will be announced at a later date, and will be made available for free to all Early Access purchasers. The skins are cosmetic-only, allowing players to select a new appearance during character selection.

Isaac Childres, designer of the original board game, has been closely involved in the development and design of the digital adaptation, with every artistic and design choice personally vetted by him.

The team at Asmodee Digital are huge fans of the original board game and are striving to offer the best digital Gloomhaven experience possible. To this end, the game will first start in Early Access, allowing our team to fine-tune and improve the game based on players’ feedback. Working together with the community, the team is confident the digital Gloomhaven experience will do justice to the masterpiece board game we all love. 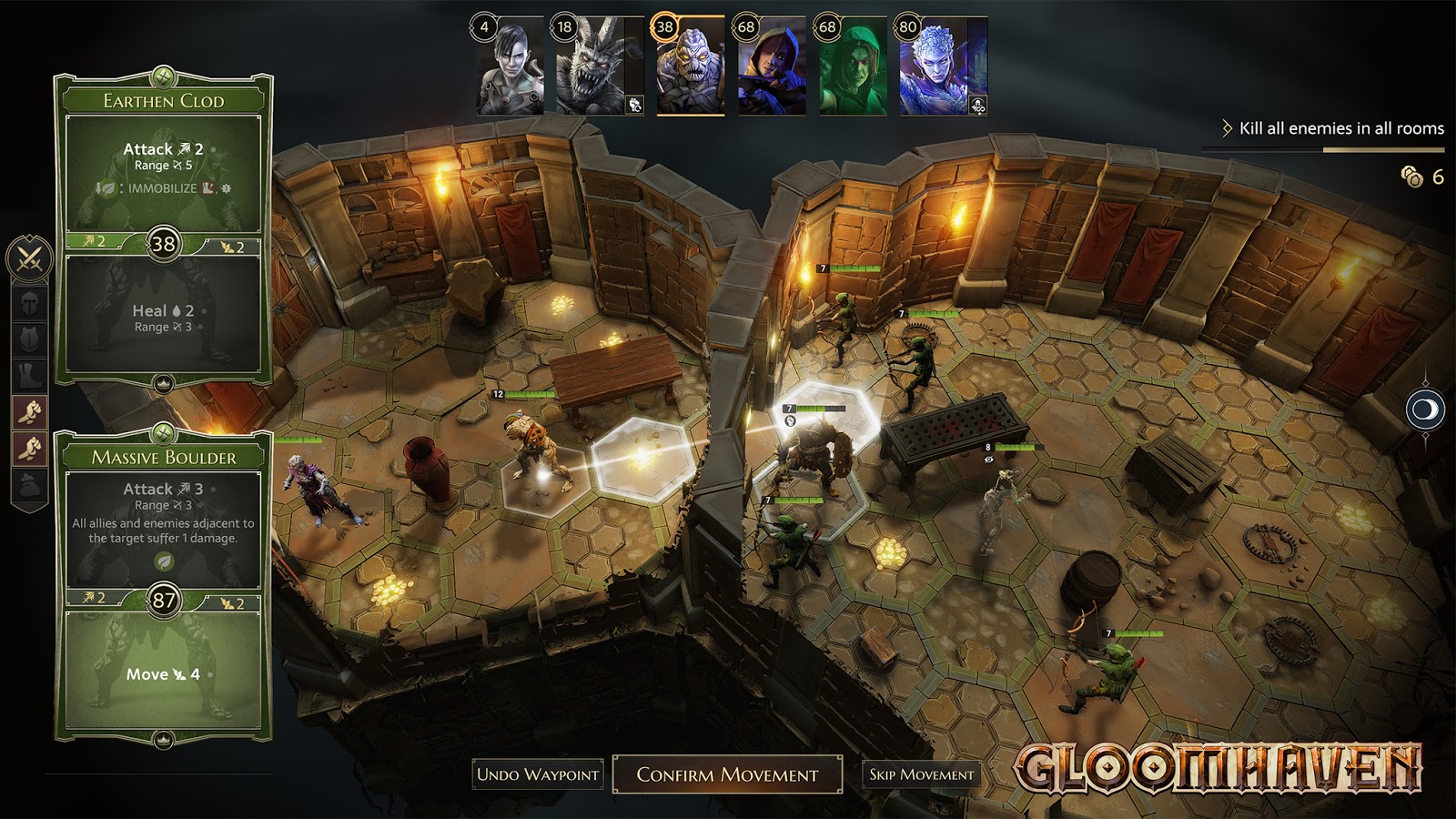 The team is aware that this is just the beginning of a journey, hand-in-hand with the Gloomhaven community, and not the final product. Content and features will be added on a regular basis, new bugs will be solved as they are discovered. At the start of the Early Access, the initial experience will appeal mostly to players with Tactical RPG experience, or those familiar with the original board game. The onboarding phase will be much smoother later in the Early Access phase, as the team aims to welcome more and more people to discover and enjoy the depth of Gloomhaven’s gameplay, without compromising the original experience.

The team has strong ambitions for the digital Gloomhaven game. The included roadmap gives an overview of what is planned. This is of course indicative, as the community feedback will play a key role in the game’s development during Early Access and the team has several nice surprises planned for the future.

Gloomhaven starts its Early Access on July 17th and is available for $24.99. For more information about the game, feel free to visit Steam.

Asmodee Digital, a fully owned subsidiary of the Asmodee Group, is an international publisher and distributor of video games with operations located in Europe, North America, and China. Asmodee Digital manages the creation, design, development, publishing, and marketing of video games for Asmodee Group and third-party creators on PC (Steam), consoles (Nintendo Switch, PS4, Xbox One) on mobile (App Store, Google Play, Amazon) and VR (Oculus, PS VR…). Asmodee Digital aims at bringing the best of video gaming with a board game DNA to life with best-selling products such as CATAN, Carcassonne, Ticket to Ride, Gloomhaven, The Lord of the Rings: Adventure Card Game, Pandemic, Splendor and much more. To learn more, please visit our website here.

Flaming Fowl Studios is an independent game studio, rising from the ashes of the renowned Lionhead Studios and have previously worked on titles such as the original Fable trilogy and The Movies. Our company goal is to build deep and interesting strategic experiences with fascinating twists and a healthy dose of humour. We also aim to include our fans and customers in the development process and by working together we hope to create something special.