With some great turned based RPGs behind us, like the Disgaeas, and some great ones to come, like the new Fire Emblem and the remaster of Disgaea, there’s been a lull in the style. While not “technically” being an RPG, Tiny Metal: Full Rumble is finally here to fill that gap with some excellently designed scenarios to make you think before you act because if you don’t? You’ve basically already lost.

It’s very rare that I game over in a tutorial. Like… very rare. However, this time around I feel like I’m somehow equated to my brother’s friend that game overed in the tutorial for Final Fantasy Tactics. Seriously… like how did he pull that one off!? Anyways, to be fair, game overing in this case was because I didn’t pay close enough attention to how I moved my troops and I paid the price for it.

Tiny Metal: Full Rumble is the sequel to AREA 35’s 2017 Tiny Metal. Once again putting you in the shoes of several commanders that are in charge of their separate forces. Each force is made up of units comprised of a variety of sources like infantry for quick and cheap deployment or armored vehicles for a variety of uses. Each type has a specific use and like most strategies, what one unit type is good at, it’s bad at something else. 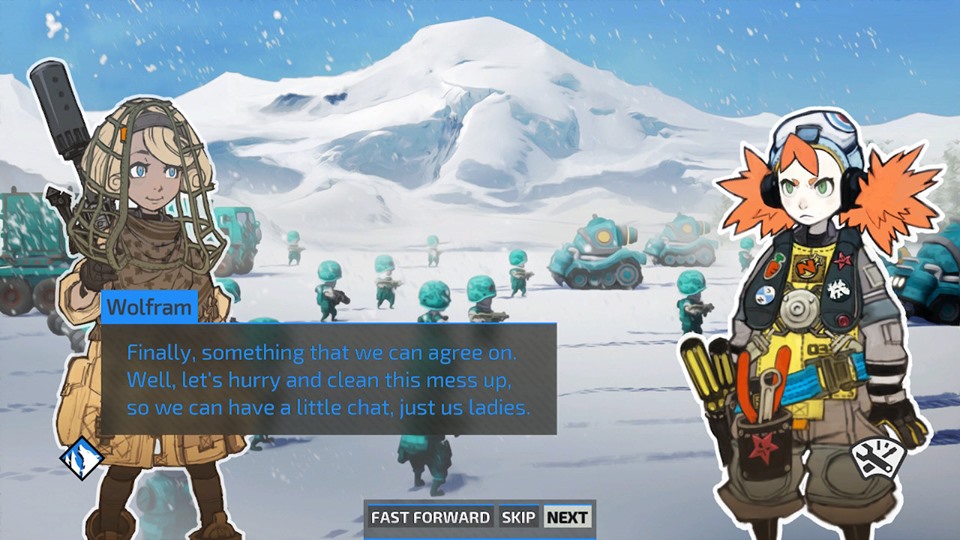 Thrown onto a square grid, you’ll be moving your forces through plains, roads and cities to fight against your opponent. Covered in a fog of war, each unit type has a both a different line of sight and ability to uncover the fog making it always a good idea to combine a few together into a squad that you’ll move together. So for example, your standard Riflemen move quickly, over a variety of terrain and can see fairly far away. Some of your tank types, like the Metal don’t move or see as far so you never really know what they are heading into unless you’ve scouted ahead. So while the Rifflement can go offroad, you would want to send an actual Scout vehicle forward to uncover loads of fog and see ahead. This combination would give a bit of anti-personnel and anti-vehicle capabilities but like everything on a battlefield, it’s not enough to cover all your bases.

It doesn’t take long for Tiny Metal to start throwing what can always seem like too much at you. Sure, you start off with Rifflement and then Lancers (anti-tank infantry), but then you get your Scouts, your Metals, your Heavy Mteals, your Vipers (Anti-Air trucks), your Radar’s to detect forces ahead in the Fog of War, your attack helicopters, your jets, your non-directional attackers that can simply fire as long as there’s something there and they haven’t moved and so, so much more. It’s not just a mouthful, but it’s a lot to take in when just getting these units into your hands. That said, even if there are over twenty different unit types, the basic premisses are the same and it’s that concept that takes what seems to be way too much and condenses it into a fairly easy to digest experience that is a lot of fun to play.

So while there are a few different mission objective types, the premise stays the same in each case. Whether a few story missions in or in skirmish, you start off with a few troops for the scenario and are given an objective. Objectives can be to capture xth amount of building or to take out a very specific target. Other times you’ll simply be asked to dispatch the entire enemy force in front of you. In all of these cases, you’ll be moving your forces around and then making new ones to join the fray.

Making new forces is as easy as building them from a factory. Each unit has a cost with riflemen costing nothing more than one hundred while a heavy metal will cost fourteen. Saving up for your new troops is an option, but if you want to make it go faster in order to get the upper hand on your enemies, you’ll want to capture as much of the surrounding buildings as you can as they’ll increase your income. Seriously, building two heavy metals a turn because you have the cash influx, and a bit of savings, is a great feeling when it looks like you’re falling behind.

Strategically, when building your new units you just build them and then they can move the next turn. As new factories can be captured you’ll always want to build the slower units closer to where you want them because on top of all of the turn based tactics, the true difficulty is in your resource management. Vehicles run on gas. Weapons take ammo to fire. Running out of gas means you can’t move. Running out of ammo means you can’t shoot. There are ways to resupply but nothing is worse than getting a few units to focus fire on one target only to find out that the one that would yell “fire” is out of ammo.

Running out of ammo or gas will happen more often than not if you’re just trying to blaze through. Sometimes it means your units are toast, other times their sacrifice can be just what you needed to buy a turn or two to finish your objective. It’s this factor which is what makes Tiny Metal so damned good because there’s no real clear way to do things. If one strategy works for you but takes a bit longer than you think it should, go for it as it. Turned Based Strategies are supposed to offer this and Tiny Metal delivers.

The only criticisms that I do have can often get in the way of making things just a bit smoother than they are. The first of these is that your confirm button is the same as your general menus so if a unit has completed its actions and you were done with it, then you bring up the menu. The other is that you need that menu to actually skip over to your opponent’s turn as selecting “skip” from the factory menu doesn’t actually count as marking it “done” for the turn. It may not sound like much but after a few hours it can make one grumble.

Tiny Metal: Full Rumble checks off a lot of elements that I’ve been wanting in a turned based strategy. With the variety of troops and scenarios available, it’s something that is easy to get into but it’s hard to master as there’s no cushion for the punishment you’ll receive if you are not careful. Great to play on both a TV and on the go, lovers of the style have plenty to enjoy with this one!