You are reading
DATE A LIVE: Rio Reincarnation – PC Review

Date-A-Live is a long running novel series in Japan, complete with an anime, side volumes, and 20 main volumes released. Rio Reincarnation is actually a set of three Visual Novels that would be considered side-stories from the main novels, consisting of Rinne Utopia, Arusu Install, and Rio Reincarnation, now available in North America for your viewing pleasure.

I should probably preface the bulk of this review with two things. First, I’ve actually read a lot of the actual novels, at least past the point that they are relevant to the game, or games in this case, which was volume 11 or 12. That being said, if you’ve either watched the anime or read volume 7, then you’ll basically have all you need to know. Alternatively, there’s a handy digest under Rio Reincarnation (as opposed to under the banner of Rinne Utopia or Arusu Install) that summarizes up to the point you need. Secondly, since these are all side-stories, all the main characters, or “true route” characters, can’t have any impact on the main series, meaning a lot of the character endings end up either feeling very lackluster, or require a box of tissues on hand to soak up your tears.

Since these types of Visual Novels are basically “choose your waifu”, I’ll just give you a general layout of the premise behind each, although they do all build off each other, so it is suggested to play them in order of: Rinne Utopia, Arusu Install, Rio Reincarnation. The basic gist of the series as a whole is that there are these “spirits” that are invading the world, and they cause “space-quakes” when they emerge into the real world from their spirit realm. 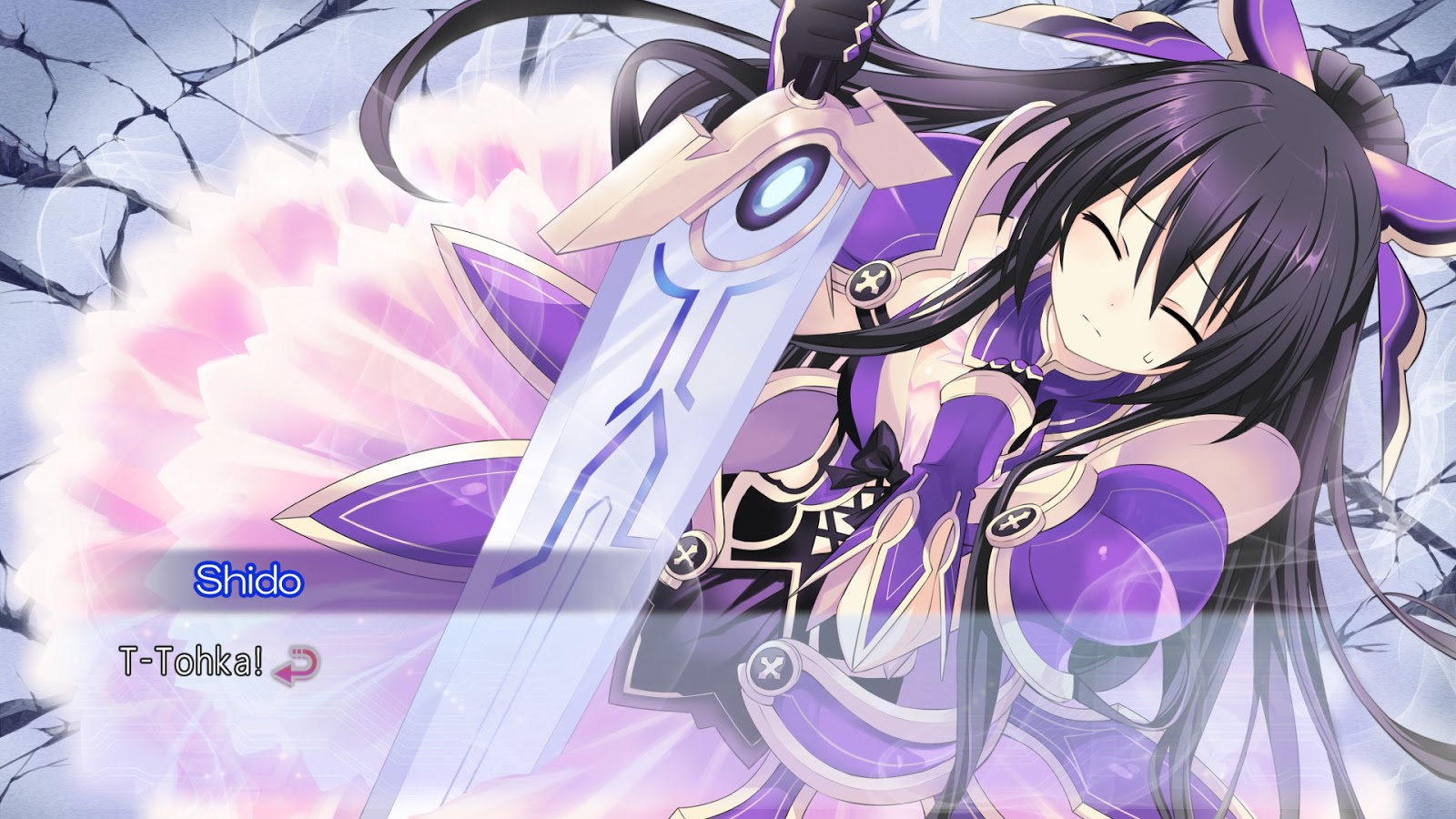 In true harem/galge fashion, for whatever reason (actually explained in the novels), all the spirits are female. Also, they aren’t really invading, they’re just trying to exist, and have no real control over when they get ejected from the spirit realm, to an extent at least. The main character, Itsuka Shido, has the power to seal the power of the spiits provided he can make them fall in love with him and then kiss him. While this is actually explained in the novels, it’s not really important to the trilogy that is part of the “Rio Reincarnation” release. Hence, the only way to prevent spirit related damage is to either kill them or kiss them **queue ending theme song from first anime season**.

Your cast of date-able targets include the already sealed spirits as well as the title characters, for the most part. Rinne Utopia starts off the three part package with Shido having an issue with the power of the spirits running the risk of going berserk. In order to quell this, he must go on dates with them to help stabilize their mental state. Arusu Install has the previous game gang plus a few more trapped in a virtual reality game trying to teach an AI what love is through a series of potentially very wacky “love situations”, as they’re so deemed. Rio Reincarnation is more or less of an append or bonus to Rinne Utopia with the basis of Rinne Utopia’s world setting popping up again, and a young girl who calls herself Shido’s daughter, and tries too give a sort of option for all the “dead end” characters.

All the games play in the same fashion, as most Visual Novels tend to do. You read text and make choices, and there is a town map where you can view skits with friends and side characters, and then choose a date-able target. You can view two side skits before having to choose a girl to take on a date. There isn’t really anything else, other than the fact that the games can actually rely on you seeing certain endings in order to unlock additional routes. Everything else is pretty standard Visual Novel fare. 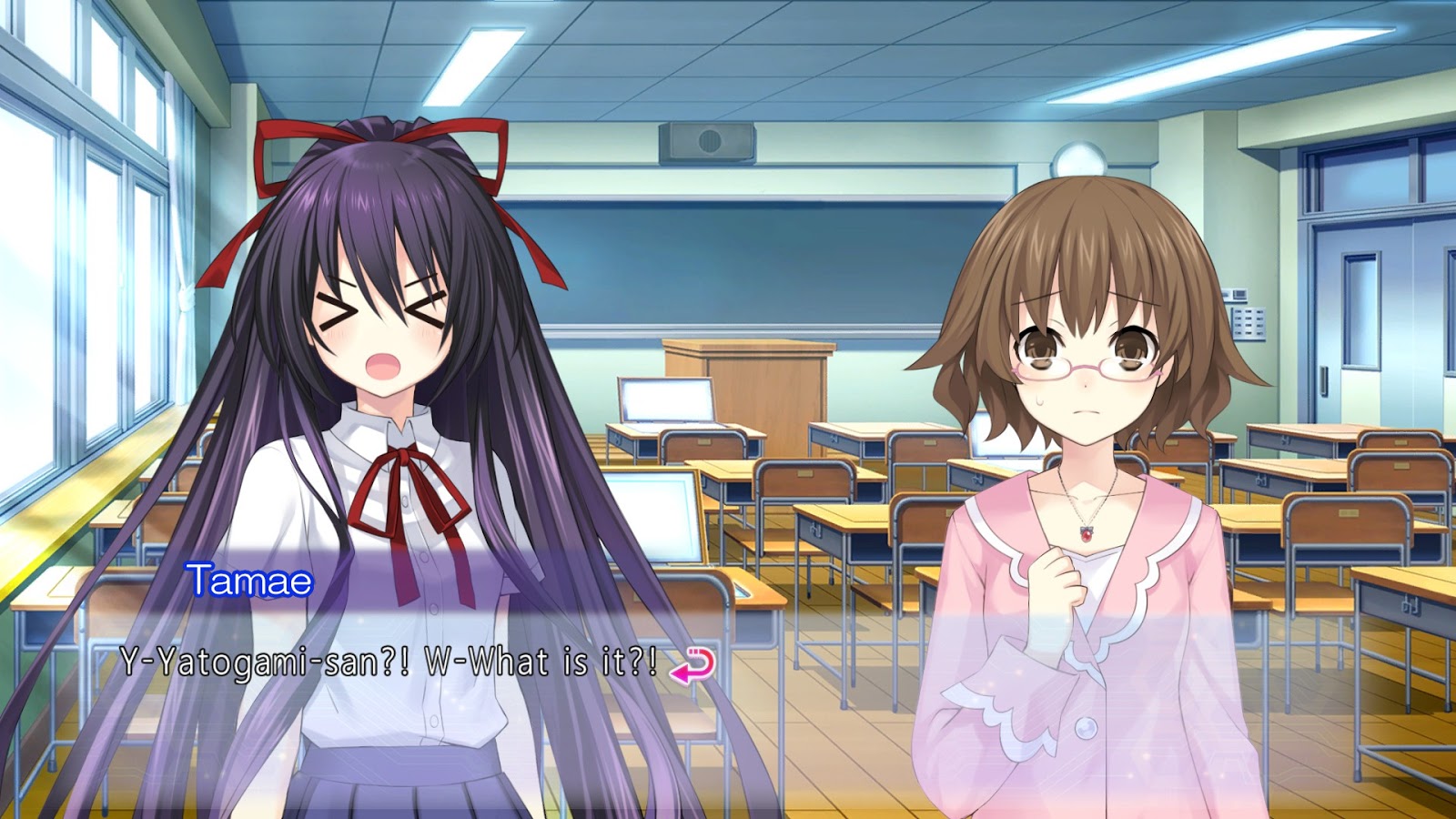 The art is nice, and I’m pretty sure the character graphics are done by the same people who you may know for the Neptunia franchise, so they have that “active” feel as they breathe and blink along with you. The music didn’t bother me either, which tends to be a really big issue I have with most Visual Novels. My favorite part of the Date-A-Live series as a whole though is just how entertaining and diverse the characters tend to be. Yes, the writing is rather good, with serious sections punctuated with some slapstick humor here and there, and events that may make you reach for the tissue box. More than that though, every character always seemed really unique to me, like there isn’t really any overlap between characters and they always have something that keep them from being a generic character trope representation.

With characters with a wide array of personalities, a solid written script, solid visuals and a really basic system, there’s a lot going on in favor of Rio Reincarnation (the package). There were some issues with the games occasionally “freezing”, where you could hear the game progressing, but nothing happened on screen. Thankfully tabbing out and then back in solved that problem.