Whelp, it’s official, I’m old. Well may not as old as Nick and Robert, but old nonetheless. Made by Voidpoint and 3D Realms, Ion Fury takes me back to the days of 3.5” Floppies which contained masterpieces like Doom 2. What’s a 3.5” Floppy the kids nowadays ask, they were an improvement upon the 5” floppy disks back when the idea of a USB or external HDD was the realm of pure science fiction.

“3D Realms, creators of Duke Nukem 3D, Prey, and Max Payne, are excited to team up with Voidpoint to bring back the legendary Build Engine, famously known for classic first-person shooters like Duke Nukem 3D, Shadow Warrior, and Blood. Ion Fury is the real deal!”

Getting straight to it, Ion Fury is a fast paced first person shooter designed like yesterday’s shooters but for today’s standards. Taking the role of Shelly “Bombshell” Harrison, you’ll be blowing the hell out of a cybernetic cult invading Neo D.C. in order to protect it by any means necessary even if that means throwing a bunch of explosions around yourself. 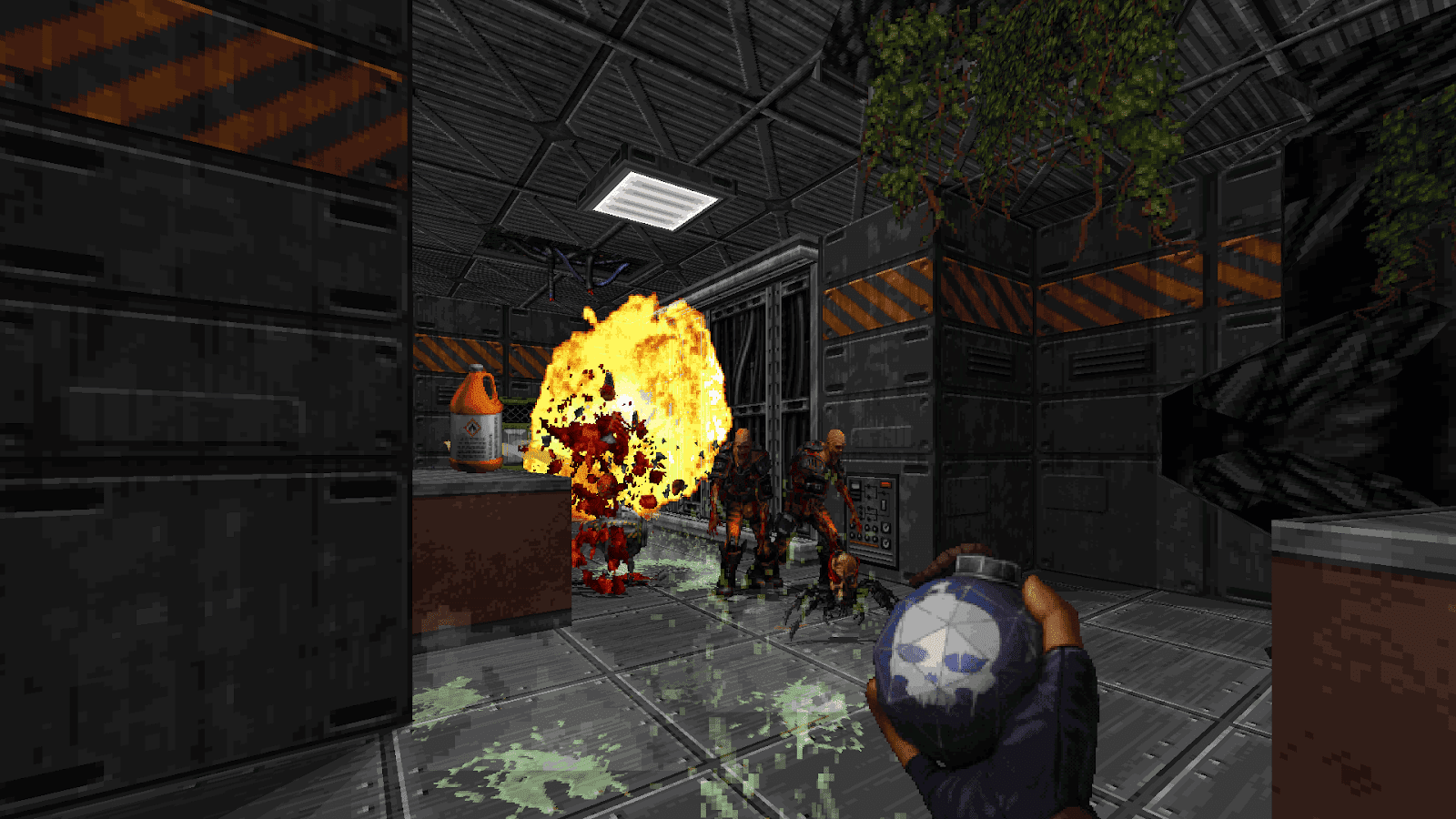 Speaking of tributes, Bombshell’s sassy one-liner attitude is very Duke Nukem as she blows the crap out of the cult members. This is also why I feel partially old as she throws a one-liner about keeping things separated which made me groan and then got some rather old Offspring stuck in my head. I don’t know why there’s an option to turn the commentary off though as it’s quite hilarious and welcomed to interpace the loads of gunfire, explosions, and death screams from everyone involved including yourself if you fall into a space that would otherwise kill you. You literally have an onscreen prompt to death scream or just watch in slow motion as you fall into the abyss.

In regards to controls, Ion Fury is fast and with a lot of the newer first person shooters being slowed down a bit, this one ramps it up. I think the last shooter I played that was this fast was the new Doom so it kind of keeps it within the same vein of gaming. Controls are smooth, each weapon has a bit of a different feel, and if you run out of ammo you can always just whack your enemies to death. A nice touch to the gameplay is that in the levels alongside much needed ammo are health packs both big and small, and plenty of armor shards to protect yourself. Actual body armor will net you fifty points, but they are more rare than the smaller ones that can be run over to pick up and sometimes acquired by taking out your enemies. 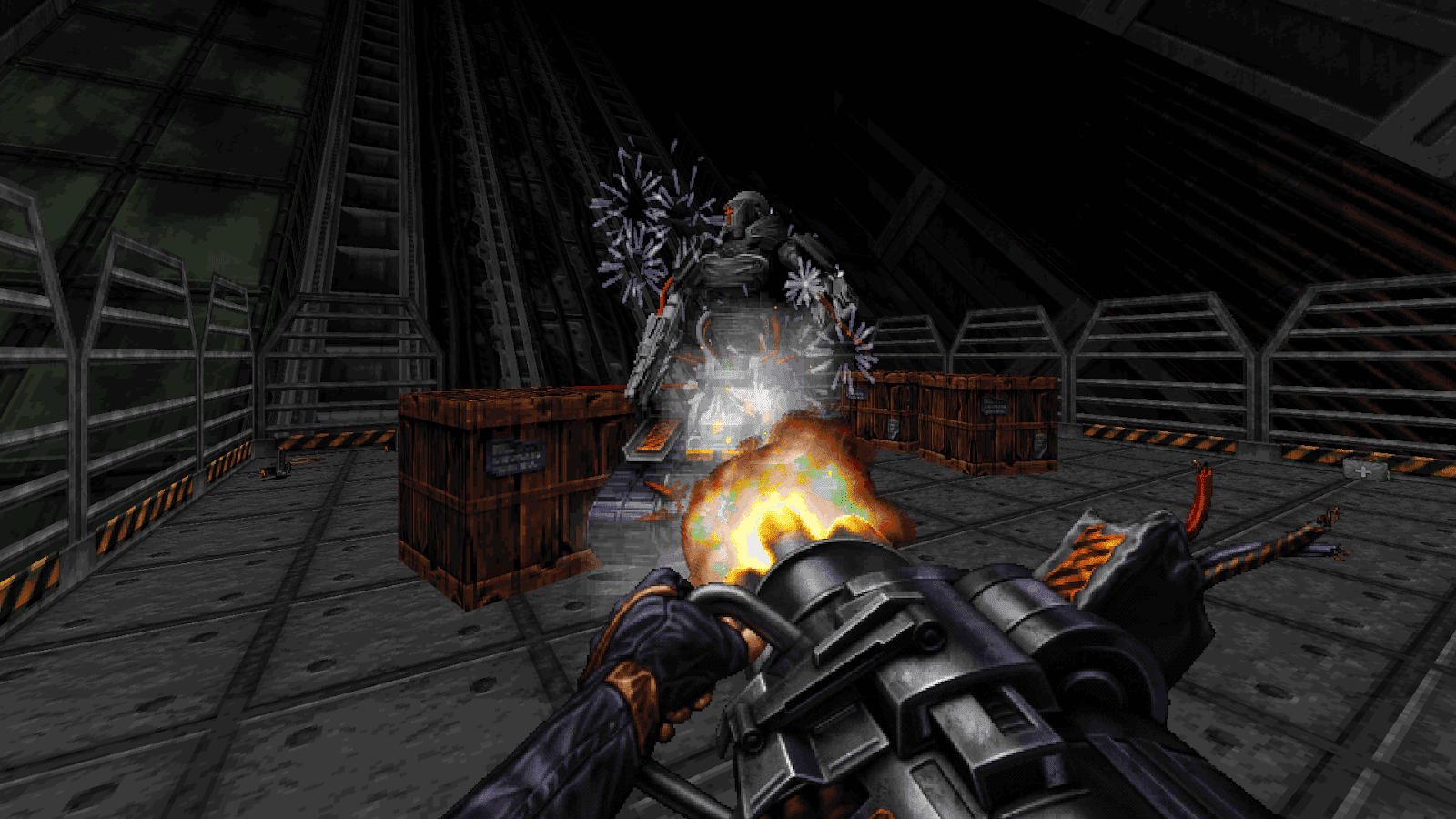 The enemies themselves also have a good design allowing you to immediately determine the level of threat. The basic cult members are in yellow clocks, those with a shotgun or grenade launcher are in body armor showing their “guns”, red cloaks are scary as they have a wide spread attack that could almost kill you and finally you have the “heads”. Heads can be attached to either floating pads that will fly after you or spider legs to attach to the ceiling and drop on you or chase after and jump as your face. Keeping with the old school style, each of these enemies are 2D-ish so it feels like an old school game but the refinements keep it 3D. All in all it’s a pleasant style to look at.

Finally, the level designs are pretty awesome. Instead of just using a one-track approach, levels are designed in modules in which parts will interconnect and open up as you move on through. Sometimes that could mean finding a key-card, other times that could mean flipping a switch, while others it could mean taking out your enemies and then having the new batch blowing a hole in the wall or you blowing out parts of the ventilation system in order to make your way through. It’s fun, the contain addition of enemies keeps things fun because if there are no enemies in your sight, you haven’t gone in the right direction. 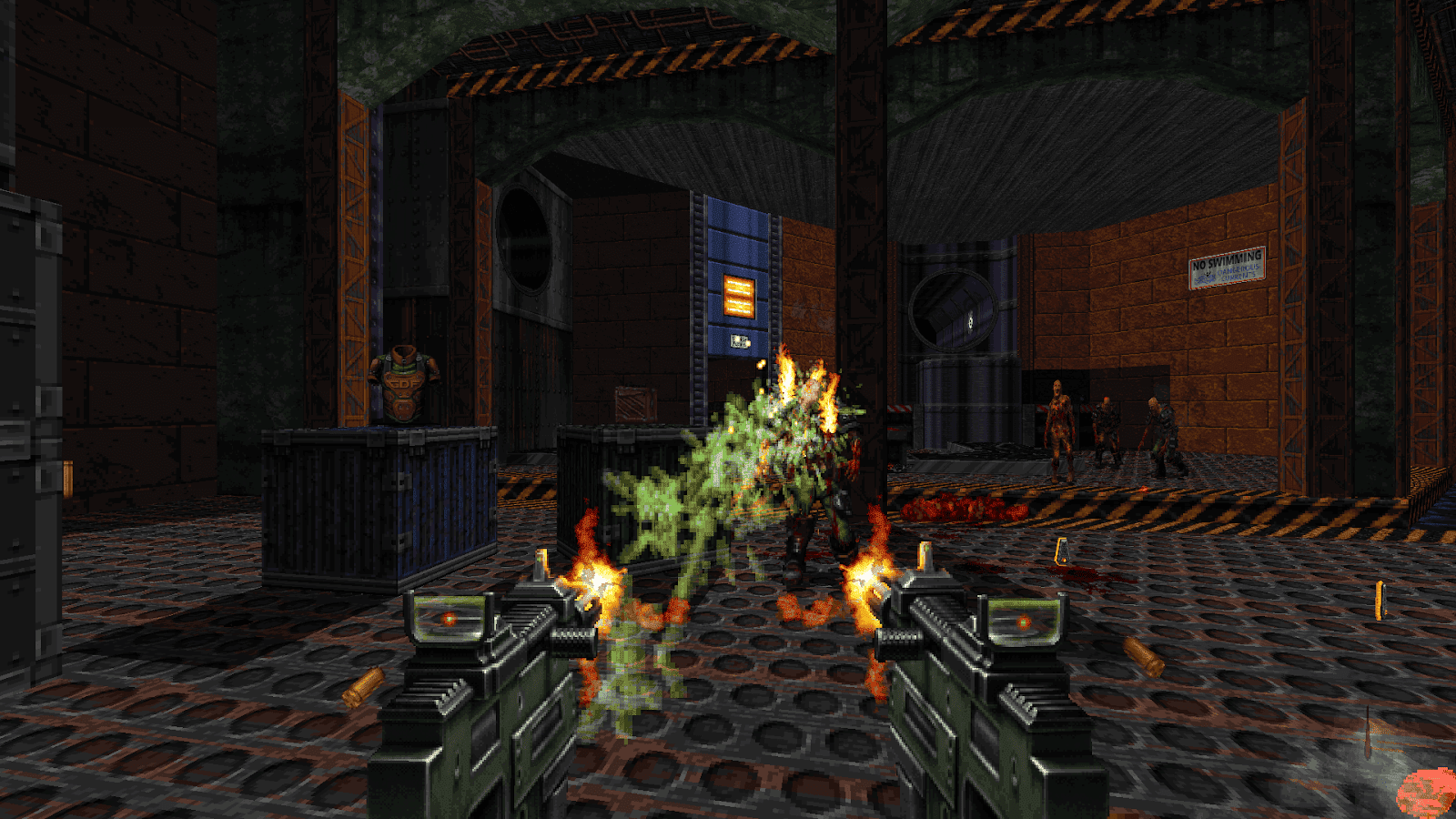 Finally finally, Ion Fury sticks to its old-schooled approach in that it’s not exactly easy nor is it really forgiving. You can save, but there are checkpoints and if you die between one of these checkpoints, there is often a lot of work that needs to be re-put in because it wasn’t saved. The flip side of this is that you’ll learn REALLY quick how to do it right and often with more health and armor than the first time, if not more ammo because you knew where to shoot for maximum damage.

Ion Fury is fantastic. Fast paced old-schooled smooth as silk gameplay, it’s both amazing to play today while perfectly reminding me of gaming on a PC that required me to boot Windows 3.1 through DOS. If there’s one shooter that you should play this year, it’s this one!