You are reading
The Forbidden Arts – PC Review

Other Platform(s): Consoles on launch

The Forbidden Arts by Stingbot Games, which originally hit Early Access back in early 2018, has finally come to completion with it’s launch on the PC, the Xbox One and the Nintendo Switch with the PS4 version slated just a bit later this year. Taking the role of a young man named Phoenix, you’ll be jumping around both 2D and 3D environments as you learn the ways of Pyromancy while trying to save the world from an evil Necromancer.

From the very beginning, I had high hopes for The Forbidden Arts and the final version definitely delivers. Having now played multiple versions, the refinements are clear to see from where it all started to where it is now. Taking two different approaches, The Forbidden Arts is both a 2D action platformer for each stage, and a 3D platformer for the overworld. This blend of styles works fairly well as each feels both unique but unified as Phoenix looks the same and the controls are just as smooth in one as they are in the other.

Unlike the very first version that allowed for death on the overworld, the newest versions removed that possibility switching to a much lighter experience in which you hunt for gold blocks as you move between each stage. These golden blocks, while limited on the overworld, and in much greater amounts within the stages, unlock challenge shrines on the overworld that put your skills to the test for health and fire ability upgrades. Each shrine require ten, twenty, thirty, forty or fifty blocks to unlock so searching high and low is required if you want to get these upgrades that will make your life a bit easier when going through each stage. 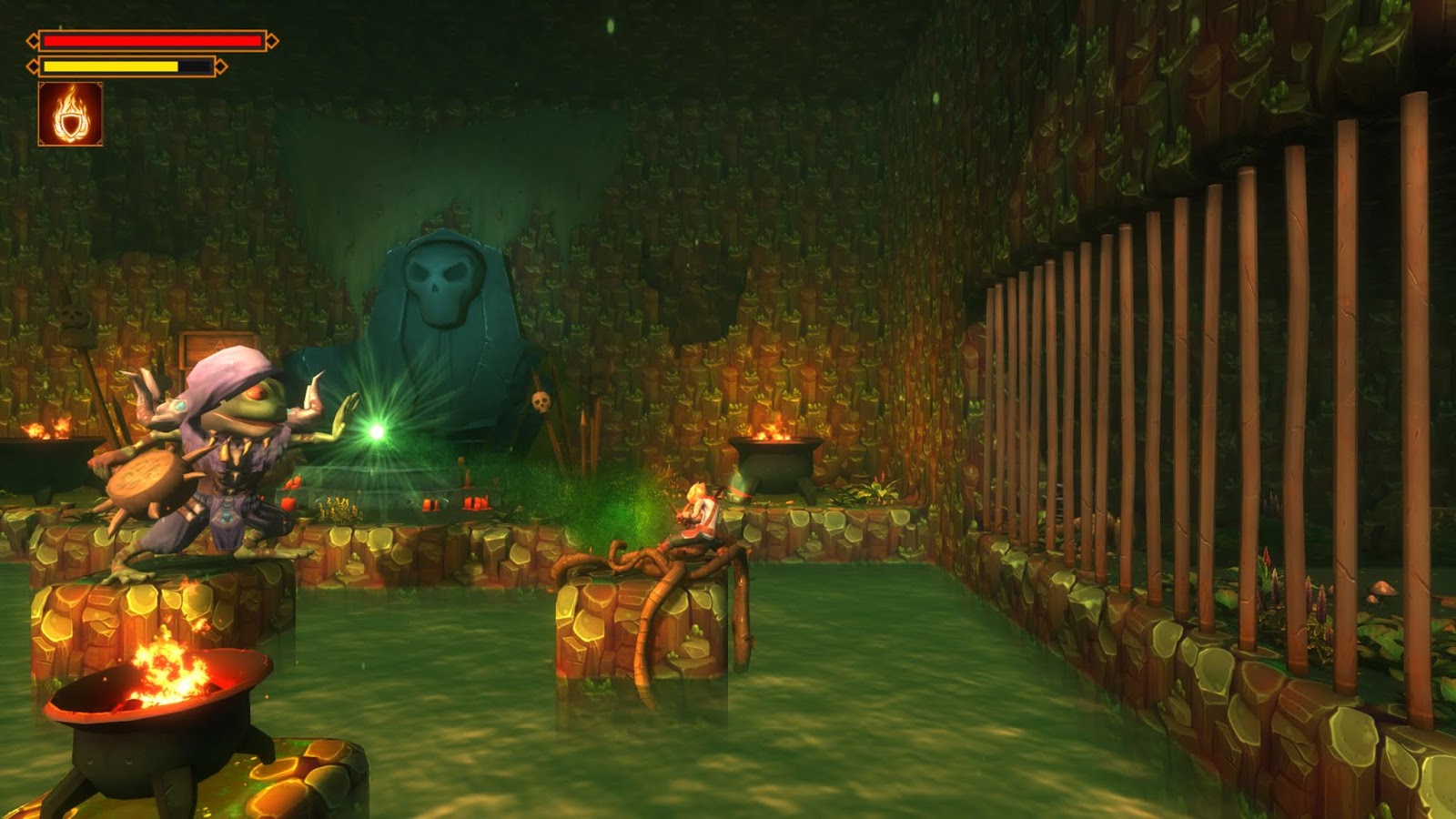 The stages themselves are challenging but never above the challenge of what you have access to as long as you play your cards right. You can run, jump, wall jump, launch fireballs, put up a flame shield, speed boost, jump boost and heat vision your way through the darkest of environments. What was really need about these abilities is that there was always a time and a place for them whether it was for particular moments in a stage, or whether it was for a boss fight three quarters of the way through the adventure.

Boss fights can only really be described as “legit”. Each boss fight thankfully doesn’t use the rule of “three”. You don’t just rinse and repeat the same crap three times to beat them. While you have to technically hit each boss four times, the method in which you have to hit them changes after hitting them two and three times. This keeps things interesting until the end of the fight instead of just zoning out to the same pattern until you’re done.

Leading up to these bosses are lengthily stages which open up points on the overworld once you’ve made your way past them. This lets you revisit specific locations when looking for something instead of having to go all the way back from the beginning. Each of these stages has a distinct feel to it both in visual appearance and in gameplay elements. Some require loads of wall jumping, others require true platforming skills as you can’t wall slide on ice, and others require some fair bits of swordplay as unless you can move fast enough, you’re not getting through certain hordes of enemies. 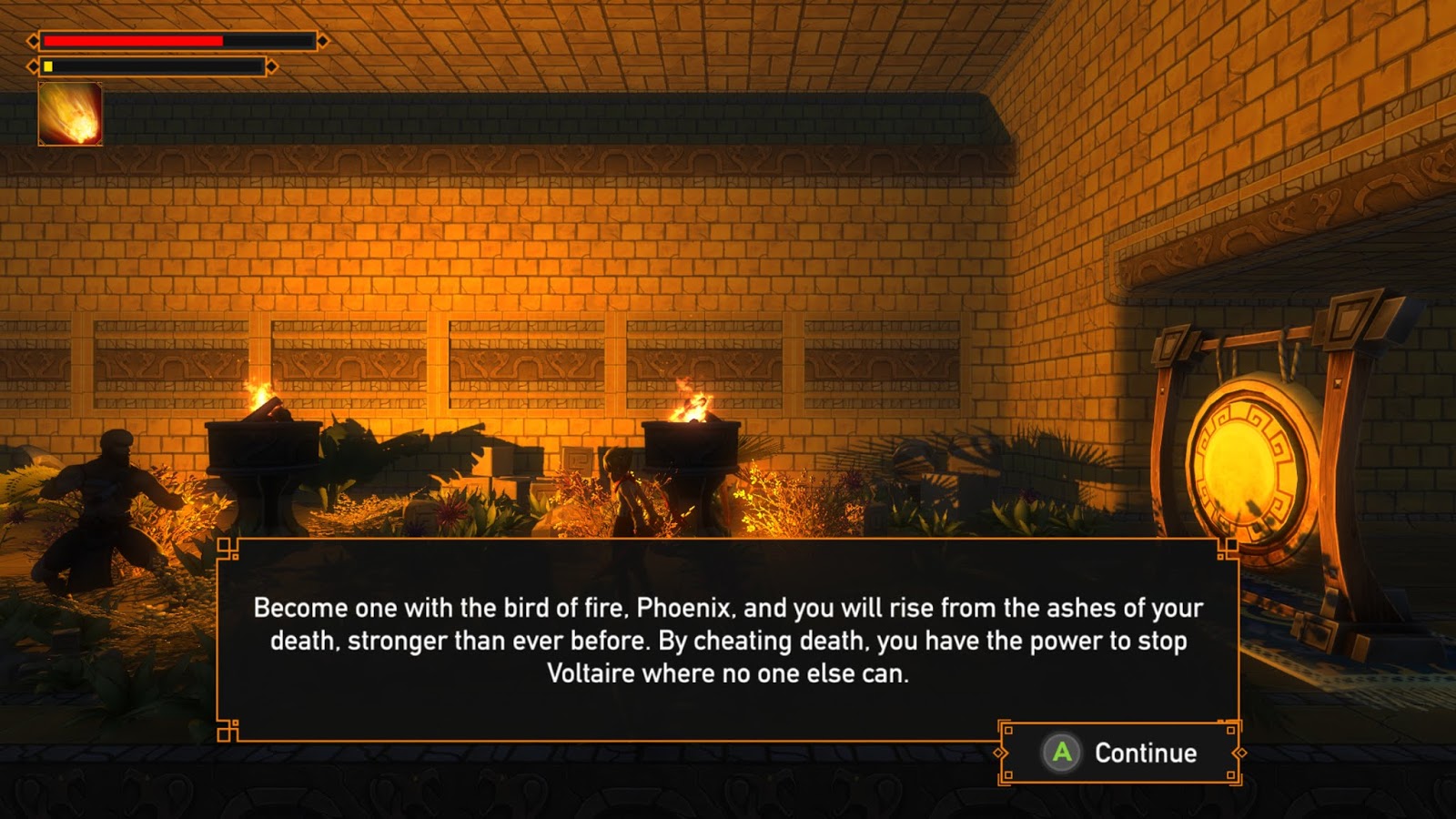 While combat isn’t as much the focal point as the platforming is, it’s quite present and while it’s a do or die in boss battles, in the stages you can either choose to fight your enemies your simply pass them right on by. You basically only have one physical attack that works in a 1-2-3 combo. Hitting your enemies is simple enough but after a few hits they’ll become invincible requiring you to back off before they retaliate. Launching fireballs from sometimes even offscreen is also a viable solution as they’ll be dead all the same. That all said, it fits and you’ll want to go a bit out of your way in order to upgrade your blades.

While I could technically complain about water, or floor spikes instantly killing you, they help to make The Forbidden Arts a bit more old school in the sense of “learn how to do it”, or “never see the end of a stage”. There’s no questioning that it’s challenging, but the reward is worth it. The stages, the boss fights, and the challenges plus the challenge factors all wrap up into a nice package that any platforming fan should try out.

Having seen the end of its development, Stingbot Games’ The Forbidden Arts is a platformer worth looking into. With plenty of refinement from the start of its Early Access to the final releases on both the PC and the consoles, this 2D meets 3D adventure of a Pyromancer coming into his power is a lot of fun.