Dragon Quest Builders 2 is not only a perfect RPG that settles nicely into the Dragon Quest mythos taking place after Dragon Quest 2 which is uncharted territory, but it’s an amazing building simulator. Taking back up the role of a Builder, both you and the Lord of Destruction will be going on a wild adventure through mud, sand and snow as they face off against the forces of the Children of Hargon and save the various peoples of the world from lives not worth living as they are not allowed to create.

Taking a look at the story yesterday, which is by far one of my favorite in the series, the gameplay is miles ahead of the first and while there are a lot of returning features, there are also loads of improvements both in the quality of life aspects as well as just improvements. Unlike the original Builder, this one is not “not a hero”. An adventurer of their own right, this Builder and Malroth both level up off of experience gained by defeating monsters. Leveling up grants you health, new recipes for armor and weapons, new skills, and is generally worth doing as it makes your life easier. Level capping on each part of the adventure though was a bit of a nice touch as it means you can’t grind past where you should be for each leg of the adventure.

Having gone this route, there are a few elements that simply made sense. Now being an adventurer and a builder, your equipment loadout now allows you to use your builder tools like your hammer or your gloves while also being able to swing your sword to defend yourself. Your hammer is back to destroy the blocks that make up this world in order to either carve a path forward or to use them for a project either on the island that you’re currently on or your builder’s paradise. Adding in some quality of life, you now have access to a pair of gloves that let you move things around instead of destroying them to pick them back up in your inventory and then move them all over again. It’s nice to have because destroying things repeatedly just to move them was a pain in the ass. 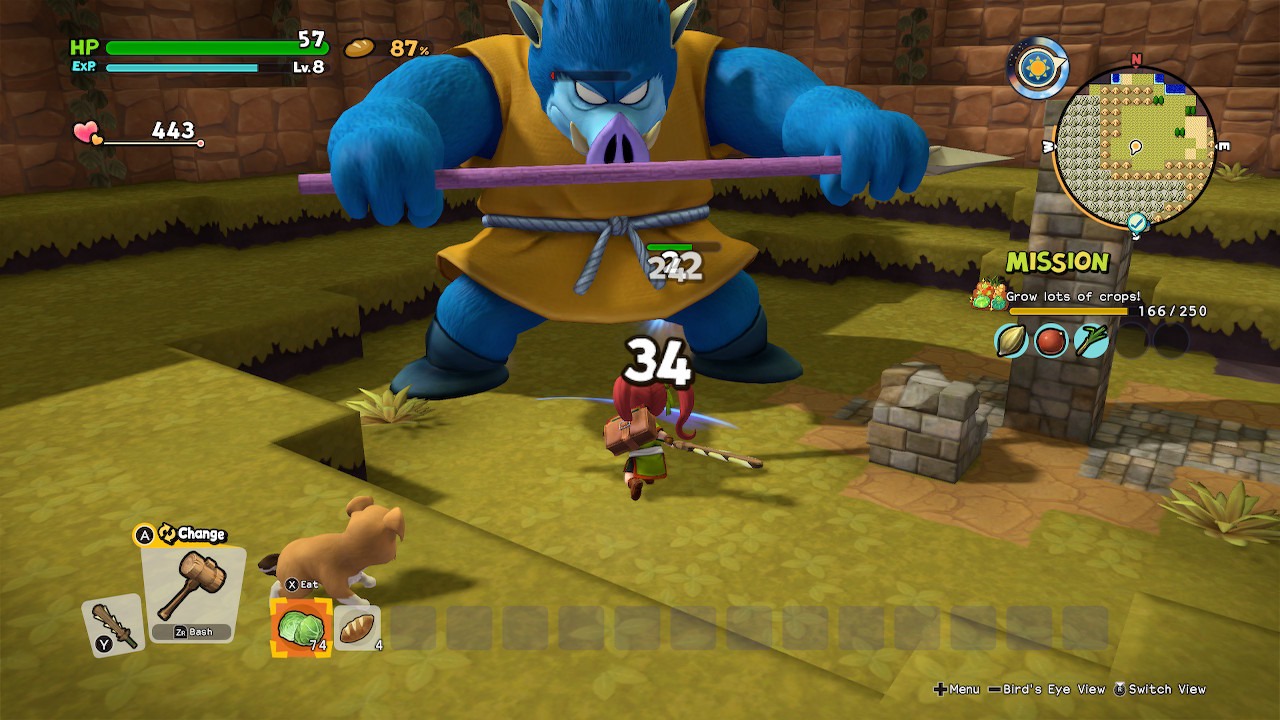 On the subject of these new tools, you now also have access to both an ironing tool and a pen. The ironing tool allows you to replace one set of blocks with another as long as they are in your inventory. If you want to change the dirt floor to a wooden one? Simply pass the iron and bam, taken care of. The same can be done with the walls. As this tool levels up from handing in mini medals, the range increases allowing you to do more and more on each swipe. The pen on the other hand, allows you to mark up an already built structure into its own blueprint to simply dump into a new spot. Houses, shops or a crafting room, all you need to do is select it and then put it down in another spot.

As for the adventure itself, whether you’re restoring the lands for farming, spelunking for metals, rebuilding a castle to survive a siege or building an ark to save loads of monsters that had resigned themselves to their fate, both your Builder and Malroth are going to have to get their hands dirty. Defeating monsters will allow them to level up and become more powerful, building new gear will help them do that more efficiently, but most importantly, what they learnt is never lost.

Unlike the original Dragon Quest Builders, Dragon Quest Builders 2 is one experience, not three separate chapters that are accessible from a menu. Weapons and armors learnt in one place will carry over to another. Your levels will follow and you’ll never lose your gear. Better than that, going into these new islands is not permanent shift in your adventure. You can always go back to your hub and bounce between the two and do what you want at your own pace. The story won’t move forward but you can better set yourself up for what’s to come down the line. And while you can’t bring your recipes back and forth until you’ve completed everything from that chapter, this doesn’t count for weapons and armor so you can always run back home and craft new gear to take a monster’s hit just a bit better. 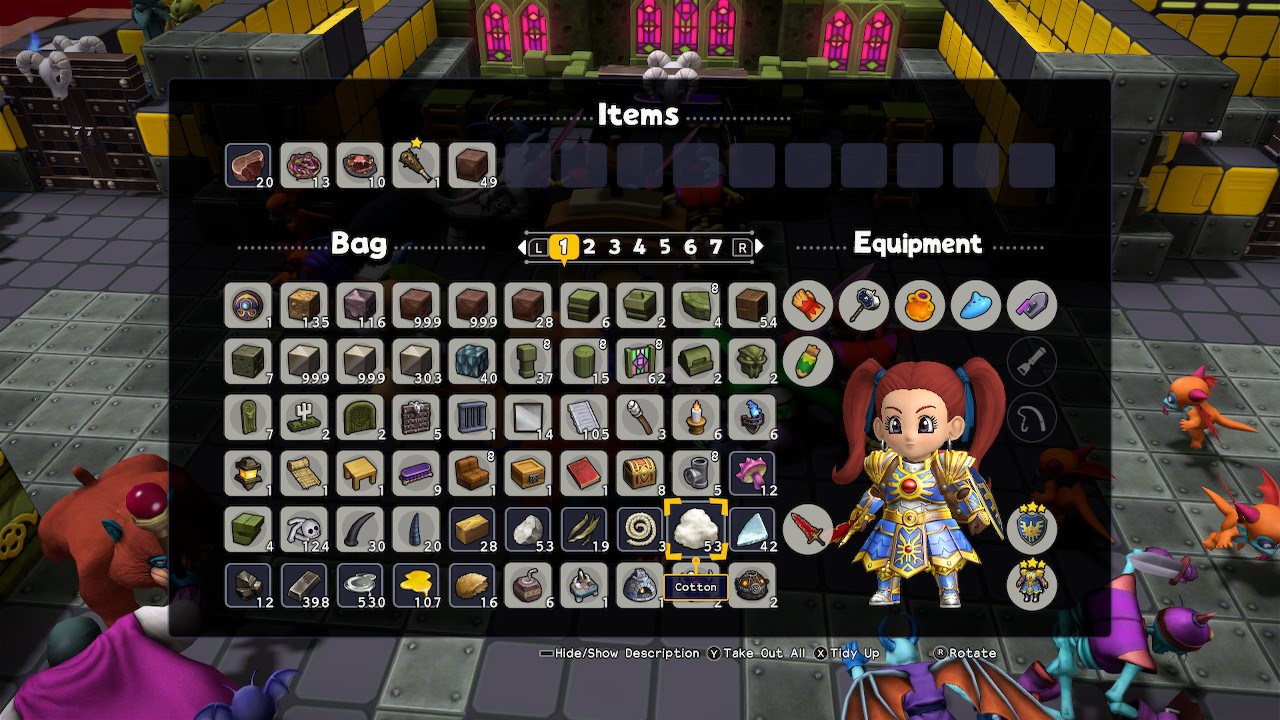 Knowing that you can always go back makes leaving for adventures a bit easier. While you have to leave a lot of things behind like your inventory and healing items, knowing that you keep your equipment on is a huge bonus. There are also more than just the story islands to explore. Smaller ones can be unlocked for exploration that will have their own sets of metals and vegetation that you’ll want to bring back on top of monsters that can be of great help. One in particular is needed as you’ll need a Yeti to make snow, but taming a Saber Cat Kitty to ride upon is amazing in order to get from points A to B very fast without teleporting. And as long as it’s not the main story quest going on, you can bring these party members to any island if you choose to.

On the subject of taming, since you learn to farm which is great for food and cooking, you can also tame cats, dogs, chickens and cows. Cats and dogs are really there for companionship however the chickens and cows can reproduce for more meat or produce eggs for another type of food. The one thing with taming them is that they’ll come back to your island but unless you make an inviting pen? They’ll roam around and good luck finding or collecting eggs in an orderly fashion. You’ll also want to make sure that these enclosures are in a safe space as now there are two types of ghosts that will attack at night and once while I expected my townspeople to take care of it… I saw that by morning all my cows were dead including the brand new calf that was born the day before. I had steak, but I now no longer had cows and had to go find more on another island.

All of these above features come back to the core gameplay elements of building buildings for the people that you’re recruiting for your island or the people staying behind as they are finally free to do as they want with the Children of Hargon gone. Inns, private housing, showers, washrooms, shops, bars, gyms, kitchens and crafting rooms are all required for the people that are living there to contribute to the overall progress of each location that you can bounce between. The more people that can craft, the less work you actually have to do as you’re free to explore and uncover new things. People will craft food so you don’t need to cook. People will craft metals and blocks for you so you don’t need to do it yourself. It’s awesome but more than that, any HUGE project? Everyone will chip in to help once you show them what to do. It’s great as you finally don’t have to do everything on your own. 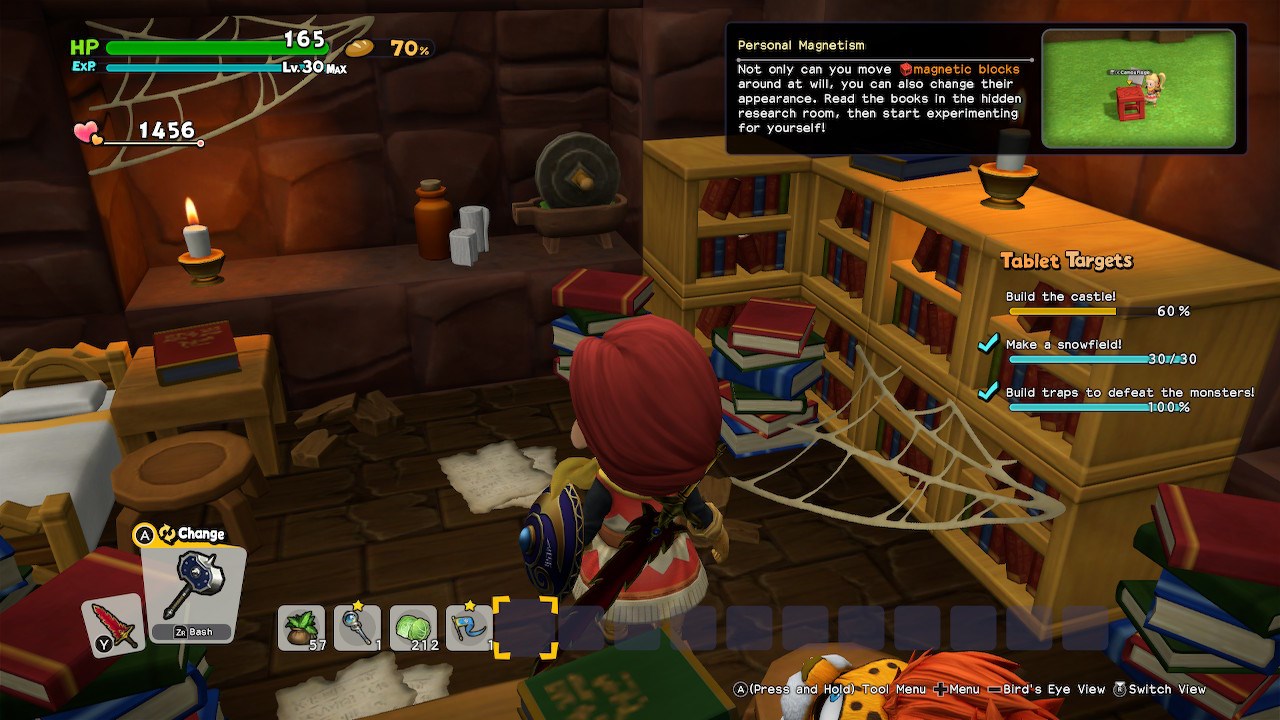 Finally, one thing that takes a much bigger stage now than it did before is the combat so it’s a good thing that you’re with Malroth for around 90% of the adventure. There are a lot of monsters, monsters will often attack your towns and your home places back in the Builder’s Paradise and even if you equip your townspeople with weapons, they are often outmatched and will need your help to push the enemies back. It’s fun though even if you only really swing in one fashion. That said, at least your weapon is always at hand alongside your tools so you are always ready for combat which is great because of how much you actually have to do.

So between the super well crafted story and all of the gameplay elements new and old, Dragon Quest Builders 2 is fantastic. Sitting very high on my Game of the Year list, this near perfect melding of and RPG and a Building Simulator sets a bar rather high for others in the style that toy with the same elements. Very well done Omega Force and Square Enix, you’ve created a masterpiece with this one.