Etherborn is a puzzle platforming game that tries to tackle the answer of life, the universe, and everything. But more than that, it is a game that has players scratching their heads as they climb along walls sideways or across ceilings to reach items that are needed to progress. Presumably, these items lead to humanity’s discovery of themselves and their purpose, but this is a point I’ll explain later on. Each level is entered by following the veins of a tree after a new pathway unlocks. And while I absolutely love this game, it has its flaws.

The games puzzle design was brilliant in that players had to learn the rules of this particular world with a very small tutorial. It offers new ways to look at levels and solutions in a way that makes logical sense. Furthermore, to solve puzzles requires players to place orbs in receptacles that are located on the ground. Sometimes this will unlock new areas and other times they will open up portals to access other levels. 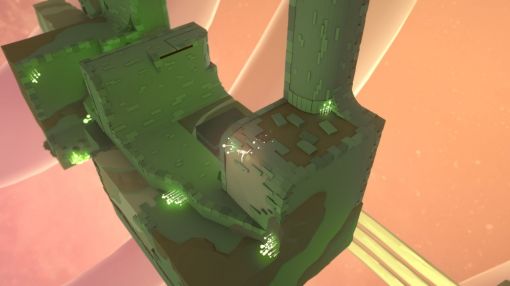 Unlike other puzzle games where players are able to bully their way through gameplay, Etherborn has very clear limits when it comes to its solutions. As in, a player cannot jump onto one side of a level without there being a curve to change the perspective. What I mean is, players are only able to jump onto platforms that are facing the same way as the character is. So, if the character is on a wall sideways, it can only jump on other walls that are sideways (unless it has a curve).

As players progress to new levels in the game, they follow a path on a tree. Based on the games’ theme, that I assume has to do with humanity’s purpose in life, I’m led to believe that the tree might represent the many branches in life. (This is also partly because plsyers are transparent humanoid beings that show some of our veins. Also, trees produce oxygen which is a necessity for human survival.) To me, Etherborn is a puzzle game that is trying to make a statement about life.

If I could say one key thing about this game, it
would be that this title needs to be played with a controller. I didn’t
not try it on keyboard, but I imagine it would be hell to play in this way.

Now for the hard part. I loathed one part of Etherborn and that is the ‘story’, especially after I reached the dissatisfying end. See, at the beginning, we get to play a
nameless humanoid figure that has no physically defining features. And Altered Matter makes it a point to keep Etherborn as neutral as possible by providing a character that possesses no voice, name, personality, or anything that would
be construed as biased when looking at its theme. Now, I believe that the whole point of the game is to tackle the question of humanity. So, in a world where we strive to understand our purpose
in life, objects like clothing or sex of the character play no role in that understanding. 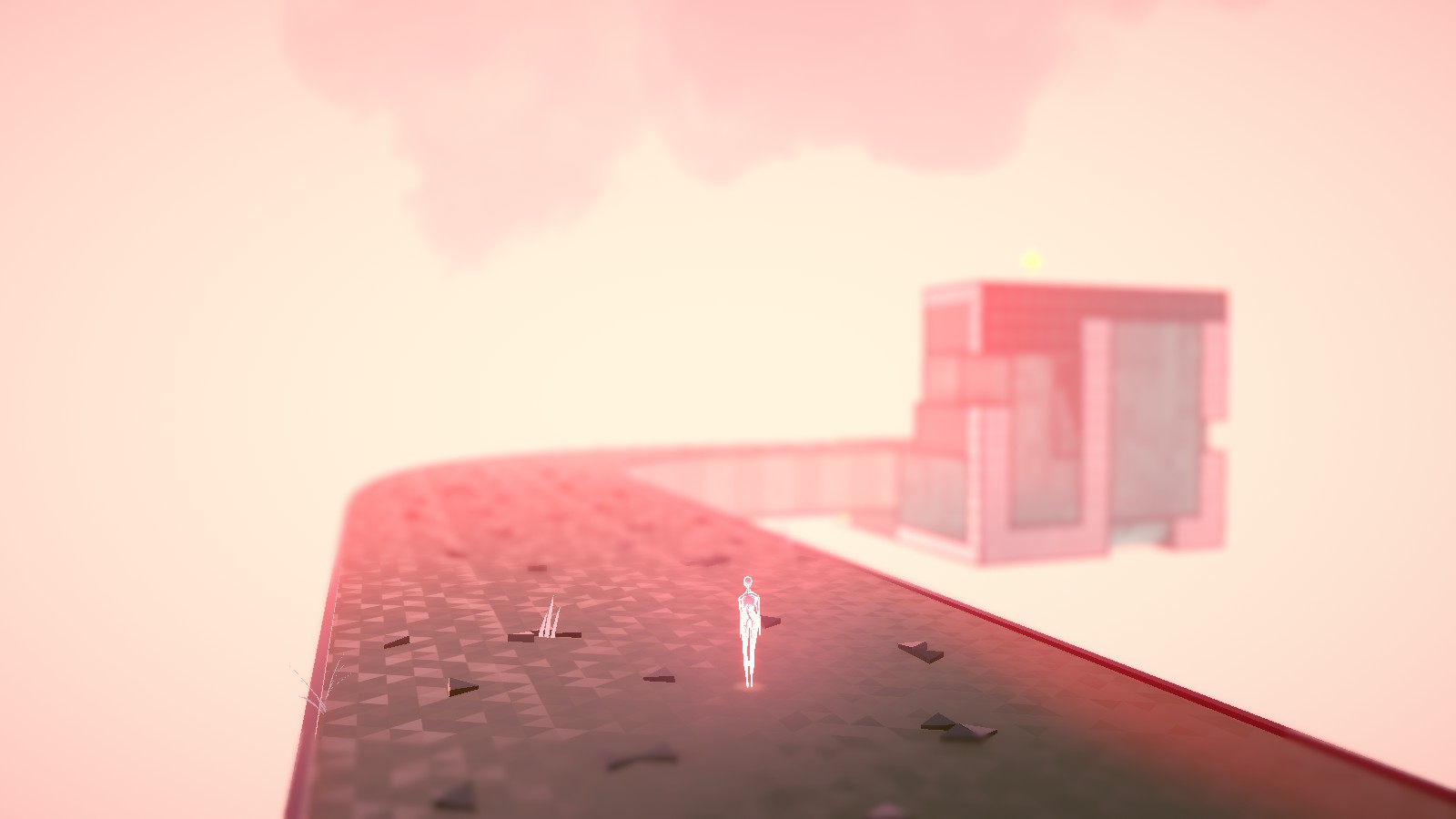 However, while the game deliberately shields itself from religious beliefs on life (as an example) or other biases, Etherborn fails to pose
answerable questions. It, instead, asks more basic ones with extremely broad strokes on the topic. This is achieved
through use of a disembodied voice that mentions the beginning of time. It alludes to the ideas with lines like this: “…humans forgot that their footprints
were, after all, no more than what a single raindrop is compared to the
sea.” And as I played though the game, I became more intrigued about Etherborn’s conclusion. I expected the story to reach some great prophetic conclusion that never came. Therefore, when I reached the end of the game, I felt the
story was shoehorned in with little thought about its theme (A theme that seemed obvious to me). At no point does the game dive into
the philosophical questions and principles that would provide for a
satisfying ending. So, while I enjoyed my playthrough of the game, the story did not add to my experience. It actually detracted from it.

Etherborn’s graphic style is quite minimalist, which allows players to focus on the challenges of each level. Since we play a character that is undefined in every way, it allows us to marvel at the graphics style and solve puzzles without distractions. And believe me, some of the areas are quite breathtaking (like the one shown below).

As players solve the puzzles in Etherborn, the camera automatically changes based on the surface they stand on. Sometimes this adds to the challenge of the levels, which I believe is intended by the developer, but other times it’s just frustrating. Also, there are levels that require a leap of faith in order to obtain an orb. Though, in the instance I am thinking about, the camera doesn’t obscure the area. 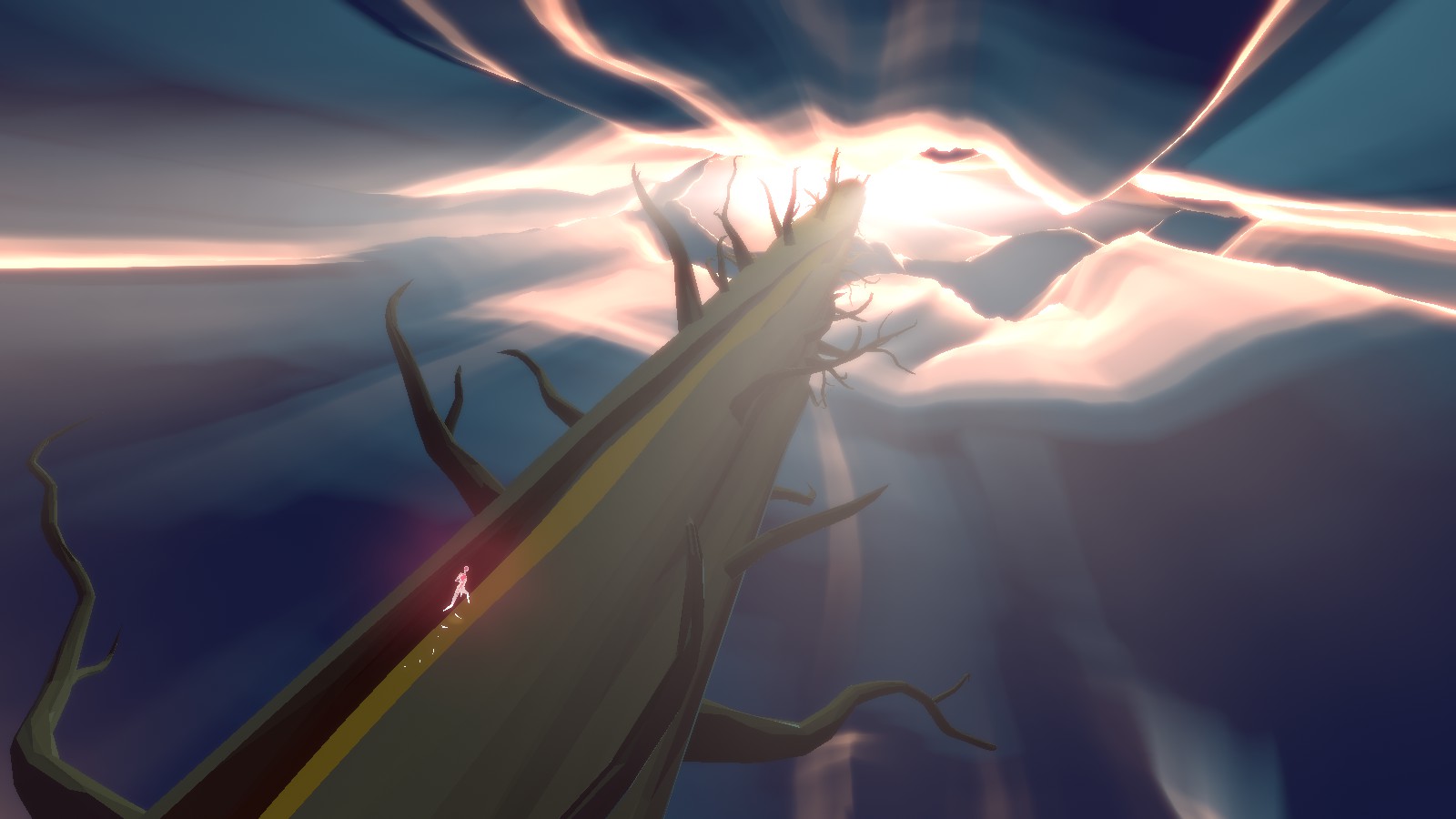 When it comes to UI, it has none because it simply doesn’t require it. There are no hotkey buttons that appear on the screen nor is there any form of compass (Not that that would help because of the way the game is designed. I’m not even sure how that kind of feature would work in a game like Etherborn anyways.) There are options when it comes to language, screen resolution, and subtitle sizes, but otherwise, the player has nothing to worry about. Etherborn is designed to be a mentally stimulating experience, both graphically and auditorally, without requiring any complicated tutorials or explanations. Players receive one tutorial section that covers all of the buttons required to play the game.

As with any puzzle game I’ve played, whether it be a puzzle platformer, a codebreaker style of puzzle game, or a murder mystery game, the music is unobtrusive. The same is true for Etherborn. Its soundtrack is quite beautiful and does not impede problem solving.

It was recorded and mixed by Abuelita Studios, located in Barcelona, Spain. They have been in business for a couple of years and offer services related to producing, composing, recording, mixing, mastering, and publishing. For more information about the studio, check out their website.

Etherborn’s official soundtrack was composed by Gabriel Garrido Garcia, who is a video game music composer that has created pieces for film, television, video games, and documentaries. Some of the tracks in the game can be heard on YouTube, like the one linked below. Anyways, more information about Gabriel can be found on his website here.

If I were to surmise Etherborn’s purpose in the puzzle game genre, it would be that life is not something that can be bullied; solutions to problems have to be worked through in a logical manner. In the image shown below, there are statues of other humanoids. I took this to mean that people will always observe others’ actions. And if I were to draw conclusions about the tree that players traverse to reach other levels, I would say that it represents a connection in life, no matter how disjointed that may be.

There are two minor issues I have about the game itself. 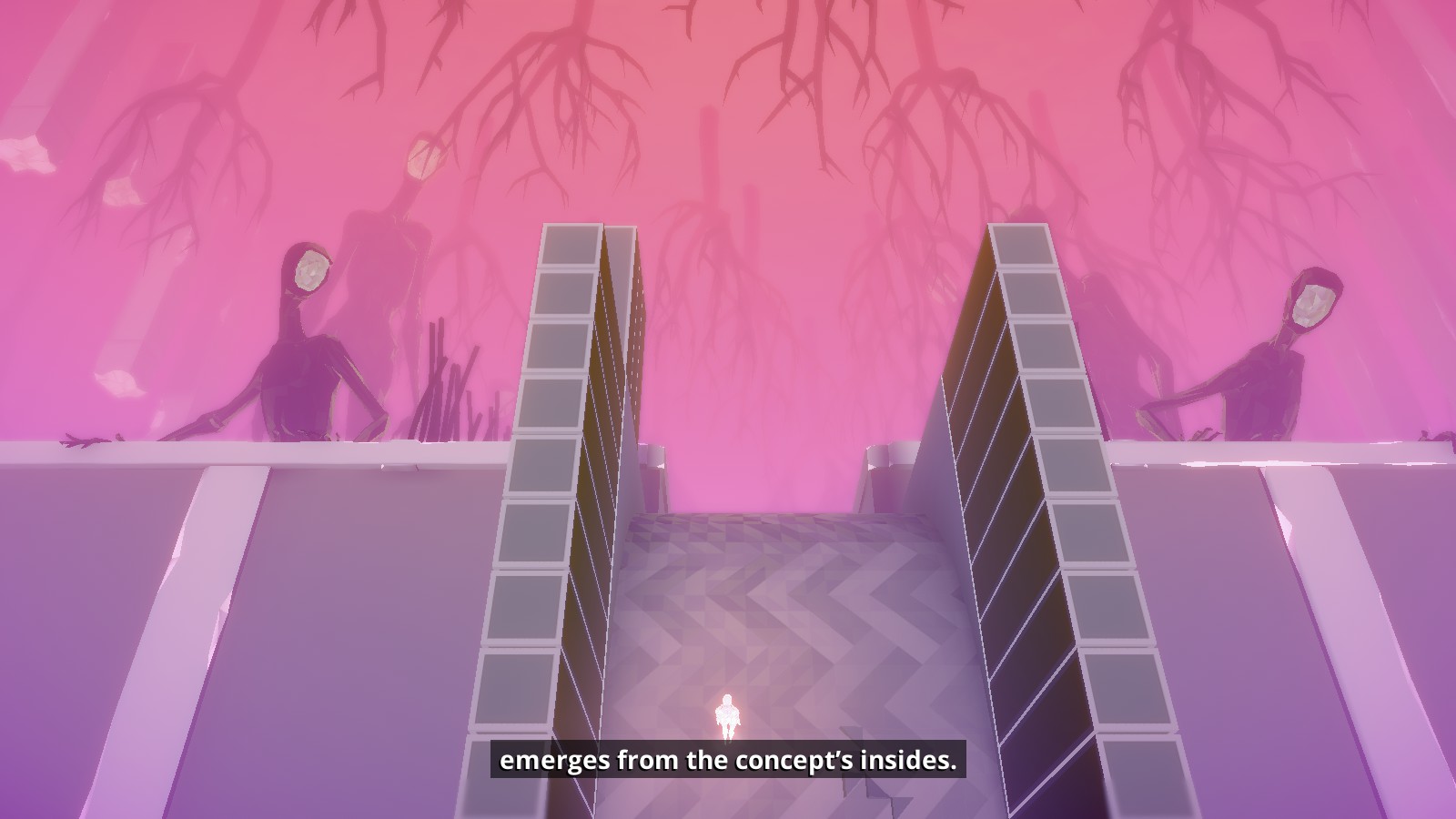 But as I mentioned above, the story is the main gripe I have about Etherborn because it fails to shed any understanding on humanity. It tries to provoke thought without posing the right questions and it tries to do this by explaining humanity from the beginning of time, when we had less understanding of life. In this way, Altered Matter failed to do what they set out to achieve, if any of my assumptions were close to correct. In the end, I found that the imagery in the levels and the lack of information was much more thought provoking than the story presented.

In my opinion, it was ambitious of Altered Matter to develop a
‘storybased’ puzzle platformer when the focus of the game was clearly its unique puzzle platforming design. And after completing the game, I felt that The Witness was better at showcasing a similar theme (if you found the right ending), where Etherborn tried to tackle it in a much shorter time frame without enough context.

However, despite all of that, Etherborn is well done. The puzzles themselves are quite clever and require players to think outside of the box. Its jumping physics are sometimes mind boggling and at times strange, but every puzzle is easily solved.

Overall, Etherborn is a lovely title that I thoroughly enjoyed, even though the story didn't need to be included. As a result, I give it an 8 out of 10. It has some beautiful music, an interesting puzzle design, and a fantastic minimalist art style. I highly recommend this title if players are looking for a quick puzzle game that will challenge their understanding for a time.