Some games are just better with a friend or a bunch of them. After the Mario Party release on the Wii I hadn’t been back to the series having seen a fair amount of unflattering reviews of Mario Party 10 from both critics and friends alike. So when my girlfriend, who doesn’t play video games, tells me that she used to play this series all the time with her brother when she was younger, I just had to pick it up and see. And oh boy did she kick ass at it. And mine.

Super Mario Party, or really, Mario Party 11. With several having released back on the N64, only a few have since been coming out at the rate of one per console. Being designed entirely for the Switch, this latest one is worth it. There are a ton of modes which offer various styles of gameplay from the original move around the board on set slaves to a full blown marching band concert with minigames. With older classic characters and once NPCs all up in the line up, most of our games had me as Boo and Izzy as Bowser rolling high or moving nowhere at all.

Starting from the front gate, you and up to three friends can join in for a party of four. This is probably one of the best line ups yet as you have your heroes, you have your villains, and you have a few generally generic enemies to add in a bit more flavor. Following standard Mario Party rules, every character has the standard 1-6 dice but as something new, or at least I believe being new, they also have character specific dice. These new dice range from risk it all to playing it safe. Boo for example has -2 coins / -2 coins /5/5/7/7 while Shy Guy has 0/4/4/4/4/4. After picking up your characters, humans or CPUs with difficulty modifiers, it’s time to hit the games. Up first is the obvious Party Mode which contains four maps that each offer up their own challenge. The name of the game? The name of the game is still to pick up more stars than any other player. To do so, you’ll be rolling your dice to cross the maps in search of coins between mini games to afford them. Still costing 10 coins a star, you’ll be buying them from Toadette while watching out for other players who are racing you there.

The core mode still works, and it works well. The only issue that I was finding at first is that after this much time, why were there only four maps? It also at this point doesn’t seem like Nintendo is planning on releasing more content in order to add to these maps which is unfortunate because with the setup for Super Mario Party, you really don’t need a new one.

The prime example of this is the next mode, the partner mode. Going back into the four maps, you now no longer have set paths to follow. Instead, you and a partner both roll a die, add up the sums, and that’s how many spaces you can move forward. The object of the game is still to pick up the most amount of stars, but now you’re doing it with a friend and communication between you is important. Playing this mode with a friend, instead of each player going separately, each team moves at the same time which means that if you’re lucky enough, and have the coins, you can both buy stars on the same turn. You can both go pick up items. One can grab a map specific item that’s out of the way while the other heads for the star. It’s a lot of fun. 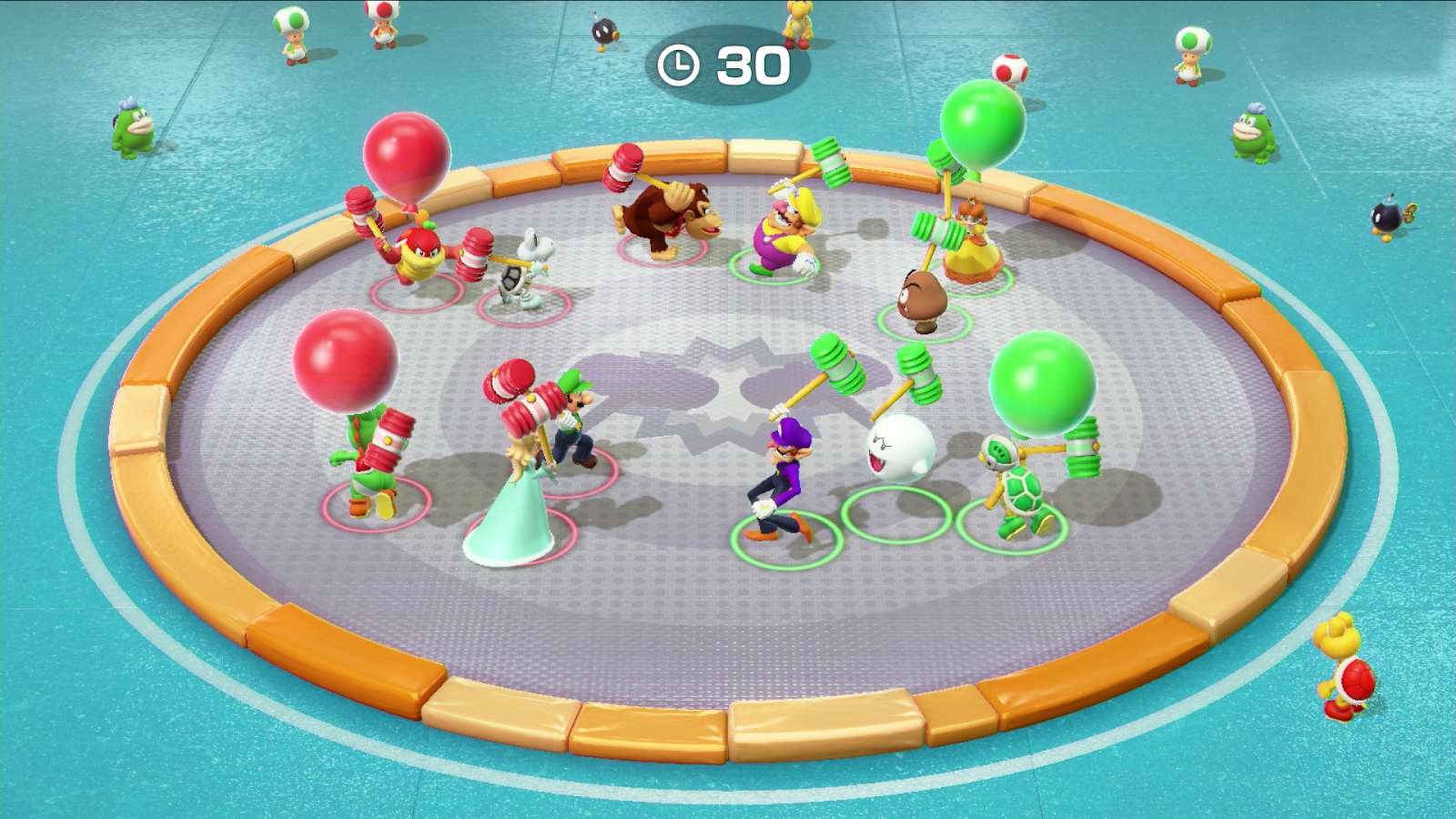 From teams of two to a team of four, the entire party can move into a whole other mode which is a raft heading down some rapids. With multiple branches to navigate, each fork of the rapids have their own challenges where it’s a race against the clock to make it to the end. In order to make it there in time, there are balloons that can be popped for four-player minigames in which the better you do, the more time gets added onto the clock.

Almost finally, going back to a free for all, there’s a band marching parade mode. Izzy hated it but I found it fun as it’s quick to do and you don’t stop for anything. You versus the other three and it’s a competition to see who can score the most amount of points and win the match! It’s a fun addition to the set though everyone has to be on board otherwise you’re never going to have fun with it.

Once you’ve gone about all four modes, which are each fun in their own ways, there’s another that unlocks called the Challenge Road. Sadly this mode isn’t a party mode as it’s really single player centric but if you want all of the characters… you’ll have to do it. So to make up for it, there’s the last mode which will not only require more friends, but more Switches? There’s a room that can be unlocked in which there are games designed to be played off of two different consoles. There is the ability to set this up from the onset when determining players and characters, but for the current moment in time this is content that will have to wait as I don’t have anyone else that I know with Super Mario Party. Sorry DK, there goes our baseball game The only issues, other than possibly not getting more maps down the line, is the lack of being able to skip certain scenes. We know that Toadette sells stars, we know that Kamek throws down unlucky spaces, we know that everything doubles down in the last few turns. The animations for these should have an option to be disabled with just a quick notification that these elements are in place especially if you’ve been playing for the last two days. We. Know.

So all in all, Super Mario Party is a great addition to the series, but, because there’s always a but with these titles from Nintendo, when are we going to see more? With the new “Digital Age”, they proved that they have no qualms with Season Passes of their own which we’ve seen for Smash Brothers and Mario Kart. New stages could be added for the already existing modes which would help to add some new life to it down the line instead of going about and waiting for who knows when Mario Party 12 will be released. All of the above said, is it worth it? Yes. Super Mario Party is worth picking up.