You are reading
Buoyancy – PC Review

Developer(s): Devs on a Boat

Publisher(s): Devs on a Boat

Side note Even though the game is not perfect by any means, be sure to give some love to Devs on a Boat by following Buoyancy on Twitter, YouTube, Instagram, Reddit, and purchase the game on Steam!

Buoyancy is a city building game that takes place on the water. Effectively players create a giant raft that has different buildings that serve various purposes. It is very simple to understand the game and can become rather challenging as players build up an army against pirates and other city invasions. It’s a relaxing that game drew me in and provided a difficulty level that I was not prepared for as time progressed.

At the beginning of the game, players can open up the tutorial of Buoyancy. It explains some of the basic buildings required to sustain a floating city. Of course, with any game, it only covers some fo the content, the rest is determined through gameplay. For example, some of the first buildings that players need are the scavenger and the forager. These allow players food and wood that is used to build structures.

Buoyancy is a different take on the traditional city builder in that players are creating a city on water, which presents its own challenges. For example, the larger your city, the slower it will move unless a motor is built. There are other challenges like fending off pirates, defending your city from invading ships, or protecting your city from nasty storms that set your much-needed buildings on fire. Of course, those are issues that players would expect from a game like Buoyancy. Even still, there are other challenges like citizens become sick from food or they will juggle knives for entertainment.

As an Early Access game, Buoyancy has a bunch of features that are not yet included in the game, which will become useful for players at a later point in time. For example, at the bottom of the screen, there are a couple of tabs that state ‘coming soon’ like the city policies and statistics tabs. I expect that once the game fully launches that Buoyancy will be a game that challenges players with the addition of policies. It will also be quite useful to see the statistics of a city so that any future playthroughs will be easier.

That said, I have a couple of minor issues with the game. The first issue I have with the game is, for some reason players can only go north, east, or west. If you try to go south, players can’t seem to go far. It’s almost as if the game prevents you from going back. I’m not sure if this is because of the randomly generated nature of the game or if it was by design – it could also be that my computer was being weird…

Secondly, the movement of your city is done by right-clicking, much like Diablo 2 or Icewind Dale. This is all well and good, but if players are trying to get to a solid structure, the city will crash into the building. Admittedly, this isn’t always a problem until there are much-needed resources located right next to a solid structure. Ultimately, this point leads to my only real frustration in Buoyancy which is that scavengers can only collect resources when the appropriate building sits inside the zone for the material. This is true for any of the buildings in your city. Which means that if your city is too large and/or not planned out properly, it might not be possible to get the resources!

Thirdly, there are only two speeds! Buoyancy has a base speed and then there is a slightly faster speed – for those that don’t have patience.

With that said, in essence, there are two levels of strategy in this game. The first is ensuring that you don’t build too quickly because you won’t have enough people to operate the buildings. The second level of strategy is your building placement. Not only do you have to make sure to build the right buildings to survive, but you have to strategically place the structures so that they can collect the free roaming resources. Also, this means that the larger your city becomes, the harder it is for your city to dock with trading ports and other ships. Having this multilevel strategy makes Buoyancy a challenging city builder without bogging down the player with too many options or statistics.

Also, when invaded by pirates or other vessels, players can lose the game when all the citizens in your city die. Thankfully, I’ve only managed to lose the game twice in this way. And while Buoyancy isn’t particularly complicated, it’s quite unique and interesting for players like myself who enjoy city builders. It isn’t a cakewalk like its appearance to unsuspecting players and I quite enjoy this title as a result.

The graphics style in Buoyancy is great, but one can only expect so much from this city builder. Players don’t need to focus on the look of buildings or people and a lot of the effects shown come from either the water features or disasters. As in, this game’s graphics are not wrapped up in small details. For what Buoyancy is, the game is visually pleasing, but it is not graphically intensive. In fact, under the menu there are quality presets to fit virtually any graphics capabilities. However, know that I didn’t notice a difference between the low settings and the high ones – so I have no idea what the presets changed.

The UI itself is fairly easy to understand. On the bottom is the build menu, settings, and other not yet included tabs like policies or statistics. On the left hand side are images of each type of resource that players find or make in the game. At the top right-hand side of the screen is information pertaining to your city like how much population there is, the citizens health, total workers, and army total. There is also a bar that shows how much pollution is present in the city. All in all, the game UI is easy to understand and displays all the pertinent information for players to succeed at Buoyancy. 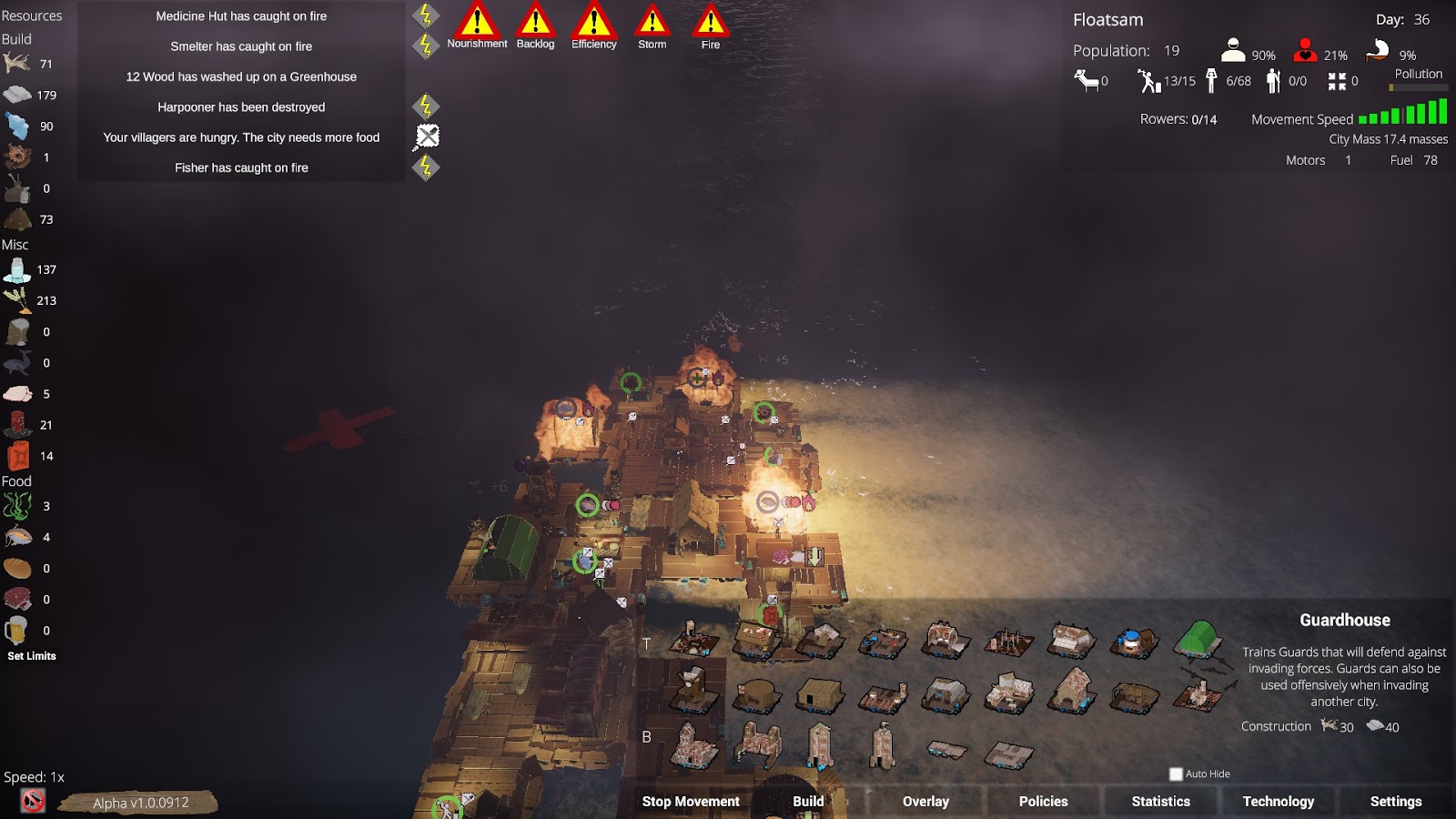 Drifting Away in Buoyancy

Buoyancy is a game that is simple to play and yet challenging to stay alive depending on how players build their city. I’ve died a couple of times simply because I didn’t have enough people to man the buildings I had created. Of course, as time progresses, keeping citizens alive is crucial to succeeding in this cruel water world. And, I’ve had a blast playing this game. It’s a fantastic entry-level strategy city builder.

As such, I'm giving Buoyancy an 8 out of 10. In no way does this game compare to epic city builders like Anno 1800 or Cities: Skylines, but neither of them have the challenge of sustaining a city on water. I find that it is a great starting point for players who haven't dabbled in city building games. It is less intensive than other core city building games and yet provides a challenge without making players feel too frustrated.