Utawarerumono is a series as steeped in story telling as it is hard to spell. Utawarerumon Zan is a bit of a weird addition to the series, forgoing a lot of the more intricate storytelling to get you into a more action styled game than those that came out in the past. While this type of game might be good for getting those less interested in Visual Novels onto the scene, it can also feel a bit lacking at times.

Uta-Zan (now my personal name for the game) is a retelling of the first game in the “False Faces” or “Two Masks” line, the first game I believe was “Mask of Deception”. Those familiar with the original game will notice that Uta-Zan follows the plot all the way through the game, skipping over a lot of the finer details. The basic premise is still there, a young girl named Kuon discovers a guy with amnesia who she names Haku, and they end up doing jobs for one of the local authority figures, which generally involves getting rid of bandits or monsters, or solving problems around the capital city.

Sound a little sparse? Well, that’s what Uta-Zan feels like a lot of the time as well. As someone who came from the original games in the series, I have a bit more knowledge than what is given in-game, as most scenes are maybe a minute or two long between combat, pretty much just covering the bare-bones in order to cover what is needed before shoving you into the action. Does this work? Technically yes, as I was rather content to spend most of the game not just reading text, but to people new to the series? This only brings up a lot of plot holes and questions that would’ve been solved with a little more exposition. At least all the key points were touched on, regardless of how well they were explained. 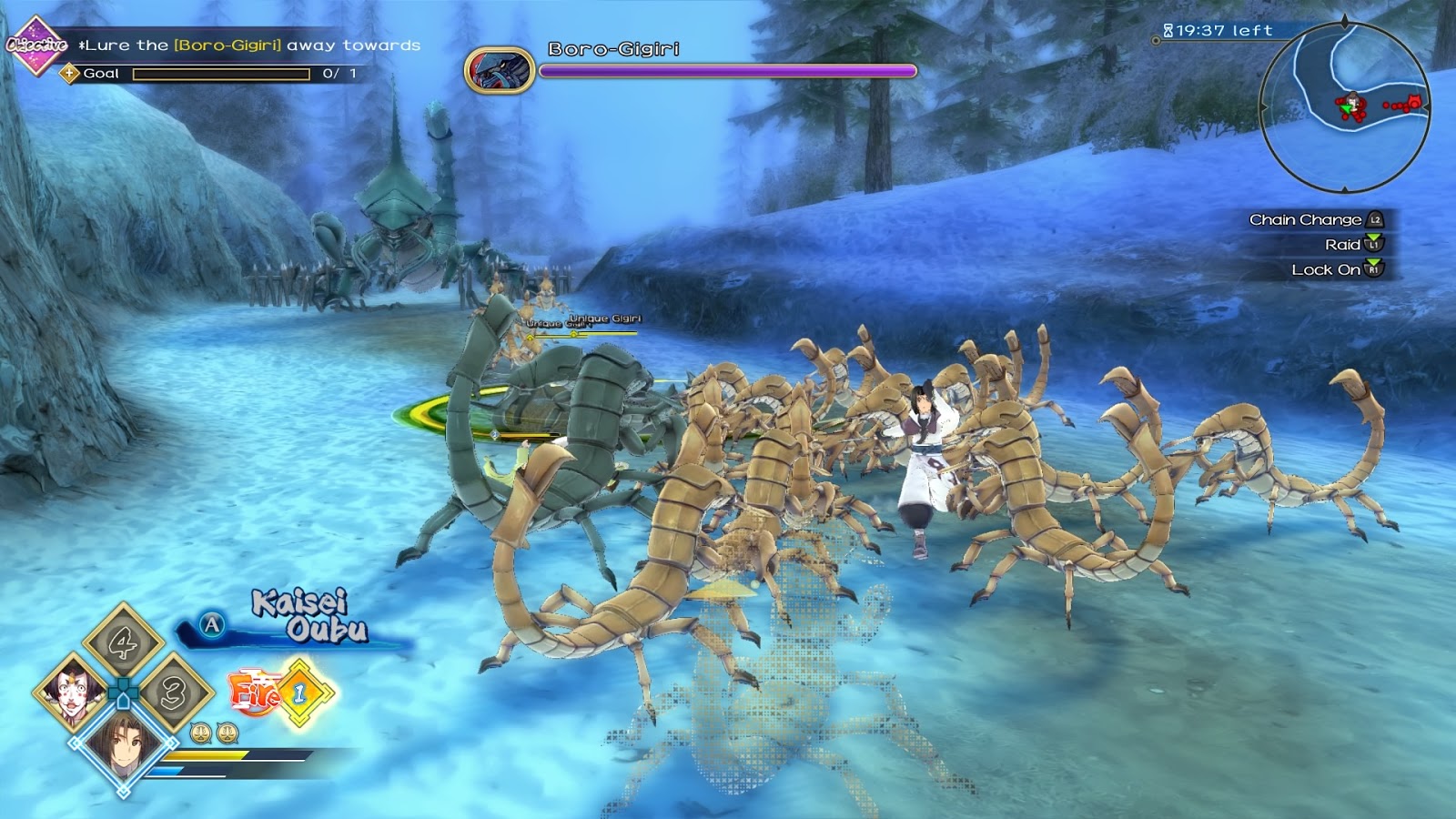 In terms of gameplay, Uta-Zan has opted for a more “muosou/warriors” style gameplay, forgoing the grid based tactics and focusing more on a beat’em up style of gameplay. You have a main mission to complete and up to two sub-missions depending on what type of mission you head out on, and you can bring a total of four characters with you into battle. As you battle you gain exp and bp, the first increases your level and the second can be used to increase base stats or character specific abilities. In battle you have pretty standard move-set combos, with a light and heavy attack that you can use in different combinations, as well as “holding” the button for a different move as well. You have special moves, two of which you can equip, that can be used if you have enough zeal, which is gained primarily by smacking the enemies, and involves an action prompt to match rings as they appear on-screen. There’s also a super move you can use once per fight if you build up enough zeal.

As an interesting tactical perspective, you also get an equippable “seal” that has a primary focus (i.e. attack or defense) and will buff your party. By performing certain actions you gain points, and at certain thresholds of points, the seal will give better stat boosts. You can also pick up “equipment” (read scrolls) that provide various effects, such as natural health regen or attack/defense increases, that are picked up in one of the most annoying methods I have ever seen: lottery. Yup, that’s right, lottery. You pay a wad of cash (presumably for the ten pack as you get one freebie), and hope they don’t turn out duds. Yeah, duds. And the better gear you aim for? The more likely you are to get a dud. Trying to get the last scroll I needed took me four attempts of ten packs, three of which were entirely duds. Thankfully duds have a chance of giving you a REALLY large chunk of cash, so the costs are somewhat offset. Have fun getting all the scrolls to level 10 this way, although at least you can get a great success which increases the level a few times instead of just once.

Despite not having a lot of plot, or even many story missions, there is a surprisingly large amount of content in Uta-Zan. In addition to the story missions, there are the battle recollections (normal and hard), free missions, the battle arena, and an online mode where you can join friends or strangers. All-in-all, there are a decent number of missions to keep you occupied for a while, and with a wide cast of characters, all of which who have different specialties, in can be fun to switch it up every once in a while with a different set of characters, especially since solo mode allows you to swap between the characters you bring with you. 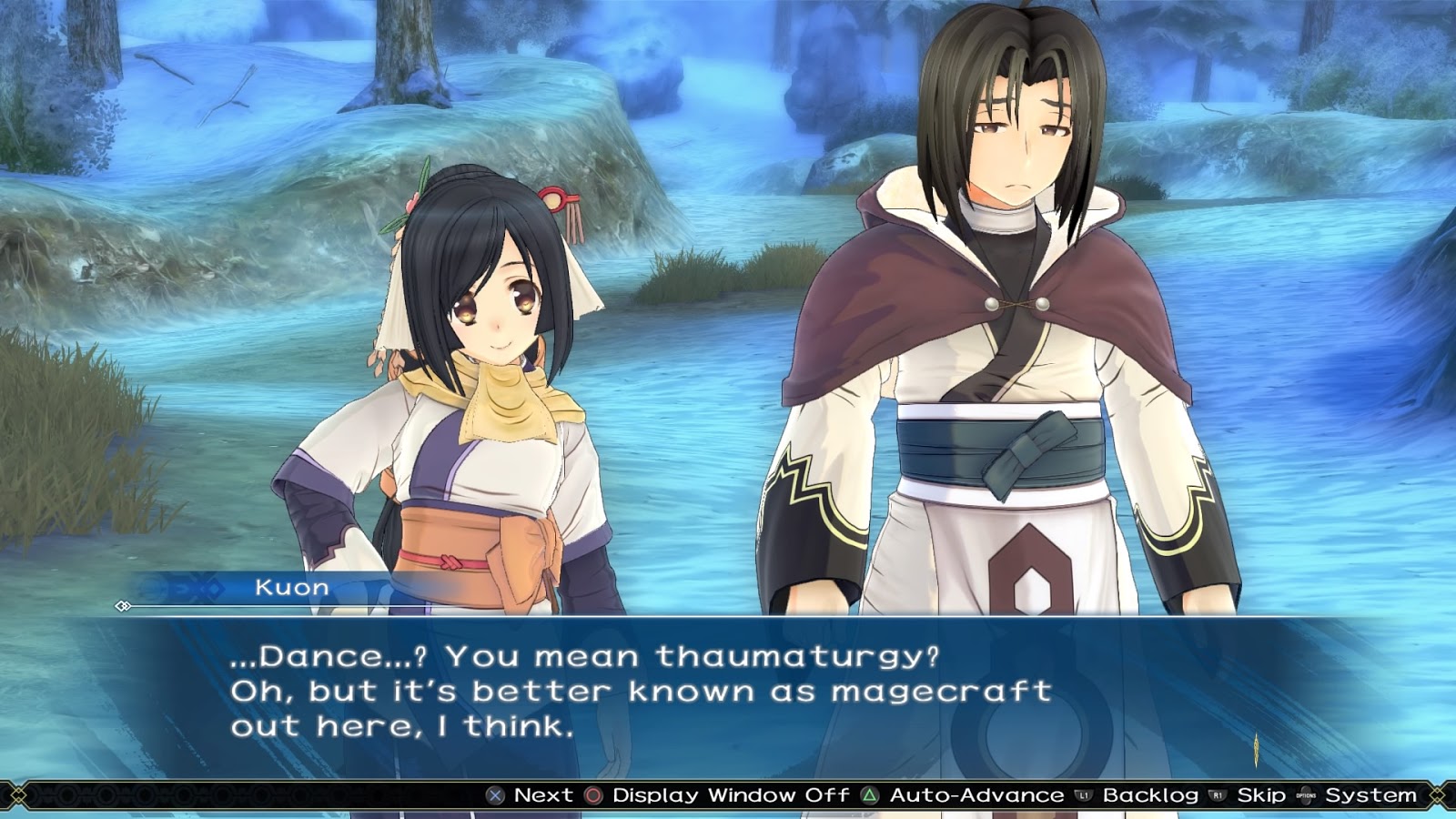 And the AI controlled characters aren’t unconscionably dumb! If you get downed, they will come to get you back up, or if your health is low and they can heal, they will run up to you to do so. Unfortunately this doesn’t mean they’re smart, but hey, you take what you can get, and what you get is pretty decent. They’ve also thrown in “Battle Medals” for you to collect, which give you unlockable rewards upon completing certain milestones, usually costumes or soundtracks. For those of you trying to unlock some of the more annoying ones, fences are useful; at least at the time I was writing this.

The game plays really smoothly, and very rarely did I get any lag, even when using a flashy move in a horde of enemies, enemies don’t have a limit on how many can be rendered, so you aren’t going to be hit by invisible enemies, and the soundtrack is really great. No seriously, I’m downloading the soundtrack for this game, even the menu theme is amazing. While there are a few issues, such as the occasional spelling mistake or the online keyboard having the “space” and “confirm” button in Japanese, there is a lot to like in terms of fun gameplay.

Overall, Utawarerumono Zan is a bit of an awkward title to give a score to. On the one hand, as someone who has played the other games in the series and knows the plot, it’s really fun without needing to slog through a bunch of text. For new players however, the lack of fleshed out storytelling may leave a bitter taste and feel a bit underwhelming. The series was really made on the story telling, and would do well with more of it, even if it’s in something like a “sidestories” section, so you can have that faster gameplay for those who can’t sit through two hours of intricate characters before needing to shake someone down for loot and exp. Doesn’t stop me from wanting to pick up another title if they do the same thing with “Mask of Truth” though!