You are reading
Atomicrops – PC Review

Notes Please be sure to follow Raw Fury and Atomicrops on their Official Website, Twitter, and Discord. Raw Fury also has a road map that will be updated as more features are implemented, so keep an eye on social media.

Atomicrops is a bullet hell with farming elements, a la Stardew Valley, where it has players grow plants while simultaneously fighting off the creatures eating your profits – literally. As a person that absolutely adores Stardew Valley, I always found that the game would drag on, but Atomicrops found a nice balance between farming and challenge. While I’m absolutely dreadful at bullet hells, I love this game – despite my inability to pass the first boss. (I know… I DID say that I’m dreadful at this style of game. I wasn’t joking…)

So, let’s look at the tutorial which is short. And when I say short, I mean very short, to the point that I wasn’t aware that the tutorial was complete. It takes you through the basics of planting your seeds, watering them, and fertilizing crops. Most of the game is spent managing your time between planting your crops and then risking your life to get more seeds. At the start of the game, players venture either to the left or to the right. To the right of the farm is a plains area that harbors bees and other fun creatures while the left is the desert area. Despite my terrible ability to play the game, I have found that going to the desert area was easier for me.

For a bullet hell game, this game is awesome in that players learn which monsters are best to go after and which need ignoring. Not all creatures drop items that are useful and certain places have items that are useful to survival but not necessarily ‘easy’ to get to. That said, in Atomicrops, there are fun items that players can acquire that will help grow more crops. One of the fun items is a pig, whose function is to expand the land you can plant seeds. Not only is this useful for making more money, allowing you to purchase better weapons or health, but the pig saves time! Players are able to collect more seeds to plant than wasting time tiling soil. Occasionally, players will get other items like a scroll that reveals the location of golden chests, or a turret that can be placed to help fend off creatures.

After a few minutes of running around in game, players will reach ‘night time’ quickly. It is during the night that your farm becomes overrun by creatures who will eat your precious crops, so it’s important to keep an eye on your profits! More than that, other pesky creatures like the bunnies will try to kill players. It’s in the players best interest to decide which creatures are the primary targets and which ones can be left for a while. To do otherwise, would mean that players can die quickly or not make a ton of money.

At the end of each day cycle, a helicopter arrives to take the players to the hub area. This is the area where players purchase new and better weapons, buy more health, and woo a couple of different characters – similar to Stardew Valley, though with much fewer options. Keep in mind that while Atomicrops has a romance option, but the focus is more about survival and defense where Stardew Valley is focused on casual gameplay – just so we’re clear on the differences. Anyways, as we know, I’m terribad at bullet hells and never managed to get enough roses to seduce one of the two characters, though both of them have their uses. One character will help defeat monsters so that players can get perks, more seeds, or hearts. The other character will take care of the crops, while you are collecting more seeds. Really it’s up to the player. Though, keep in mind that the rose cost increases each day roll and the benefits received by the player changes each time.

To the north and south of the farm are areas that are unlocked with bridge repair kit and these areas not for the feint of heart. The rabbit monsters, which are everywhere on the map, are tougher in these areas and they shoot faster. It also seems like there are more enemies on the map in these areas. Sadly, I wasn’t able to make it much beyond that point to see more, but with practice, the game becomes easier to progress.

After a player completes a season that lasts only three days, they are
given a rating. Depending on how much players have made, they are
allotted rewards.What’s not to love about that?

Overall, Atomicrops never bores players because there are many things to do and to focus on. And even though I never made it far in the game, I really enjoy this title.

It’s quite simple to learn the controls of Atomicrops whether it is
played on controller or on keyboard and mouse. With the controller, I found that certain things were much easier, but since I’m terrible with aiming on an analog stick (as I grew up as a PC gamer), I opted to play with keyboard and mouse. So, WASD are the movement keys and like with most games, F is used to pick up items. Spacebar allows players to fertilize the soil. Picking up crops once they’ve grown means holding down the alt key, which I find is weird but isn’t hard to become accustomed to. Shooting monsters is done by left clicking while aiming the mouse in the direction of the creatures. Planting or tilling soil requires players to press on the right mouse button. It’s important to know that both buttons will run at the same time, meaning that players can plant seeds and shoot creatures simultaneously. This is a super useful fact to know about the game.

On the bottom left of the screen are icons indicating the amount of
water being held, pickaxes, and fertilizer. In the middle on the left is
where any seeds or roses are displayed. On the top left has the display
bar for health and how many beans were made in that day.

For an Early Access title, Atomicrops is a solid game, although I have some questions. In the main menu, there is a button to show the controls for the game, but it actually doesn’t have anything listed. A pop-up appears that simply says ‘under construction.’ Yet, when players are in game and they hit escape to get to the menu screen, the keyboard controls are shown on the left hand side. Huh? Why show the controls for keyboard but not have the controls listed for the controller? 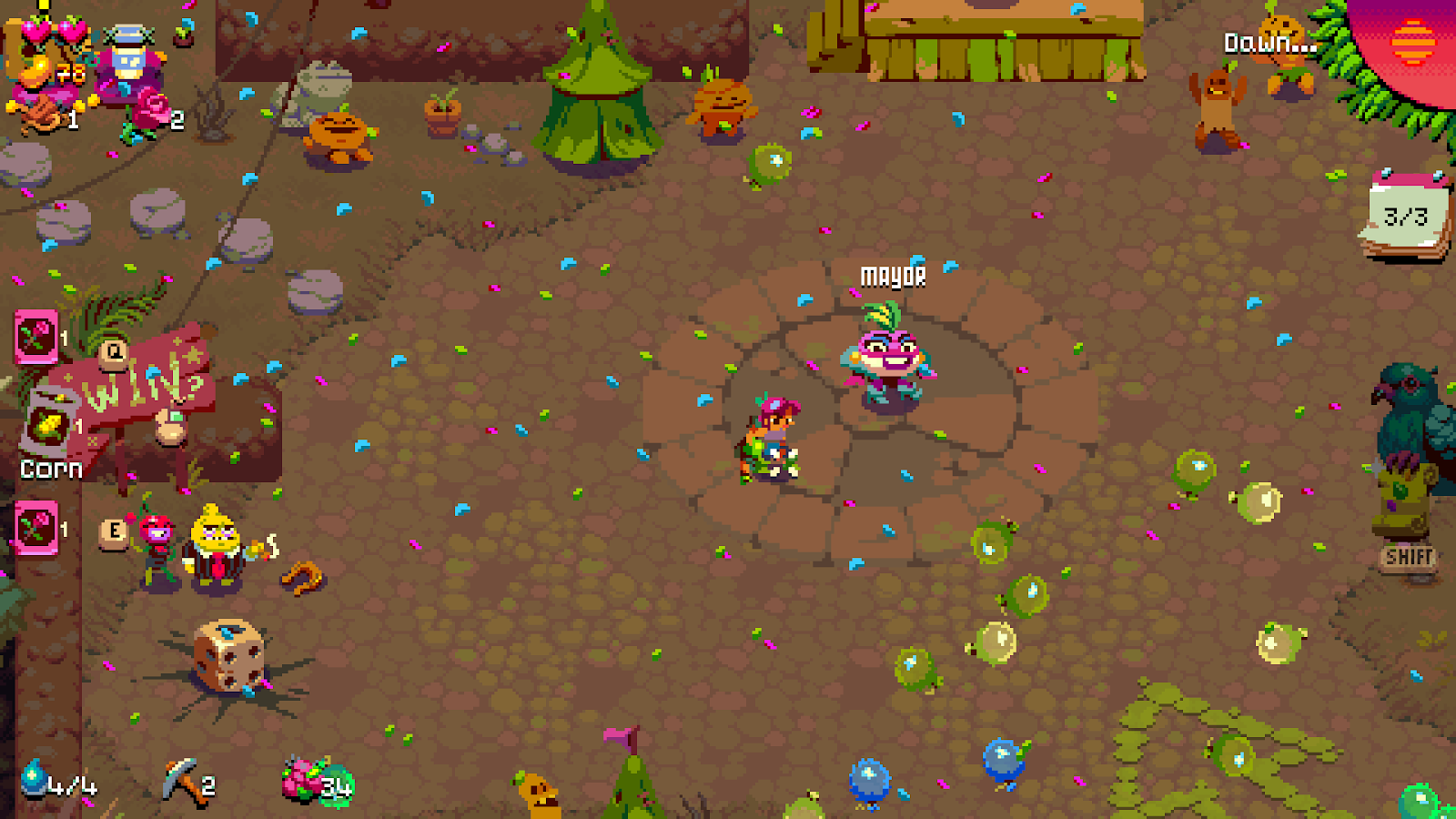 Finishing off the Monsters

At first I was going to crab about the difficulty level of this game, because I felt like it was a little too challenging for certain players who are not adept at bullet hell games. However, leading up to writing this review, I read an intriguing opinion piece about a games’ difficulty level from the perspective of a game developer, and found that my opinion about Atomicrops difficulty changed. Just because it is a bullet hell game and knowing that I’m terrible at these games, I knew the terms of the game style before requesting for a review code, meaning that my complaint about it was not as valid as I thought it would be. As such, I feel like the challenge level of Atomicrops is about right (especially after watching people play this who are infinitely better than I am). I found that the game becomes easier with practice. The only thing players have to worry about is having the patience.

The complaints that I have about Atomicrops are mostly preference based but they are:

Atomicrops is a fun bullet hell and farming game that allows players to buy new weapons, heal, and court a couple of different characters. It has a level of chaos that I actually enjoy and I can't wait to see what elements will be added to this Early Access game. As such, I'm giving Atomicrops a 9 out of 10 because it's fun even though I'm dreadful at it!