You are reading
The Alliance Alive HD Remastered – PS4 Review

Back when Alliance Alive first released, I heard the name maybe once, read a few bad reviews, and promptly didn’t think too hard about it. I’d be kicking myself harder today if I hadn’t played the HD remaster. The story is a little hard to pin down without spoilers, but the gist of it is that the world has been split into sort of cordoned off sections, with an impassable wall called the dark current. The world is ruled over by daemons, powerful beings that decide to lorde of the humans of the world like an impersonable king to his peasants. However, one of these sectioned off lands has it pretty rough, with the local policing force of the daemons, the beast-folk, treating the humans as disposable tools for their own amusement. Well, eventually something is going to give, and a group of humans decide to overthrow their oppressors.

Gameplay in Alliance Alive is a wonderful throwback to a lot of traditional RPG elements. You have ye olde world map with monster symbols that you walk into to initiate combat in a turn-based fight, a world map that you traverse with different abilities when the unlock, guilds to visit and upgrade, and so many collectibles to find. Do some of you older gamers remember Final Fantasy II? Not the North American version, but the original II, or the remake released later? The one where your stats are determined by how much you use a stat? Remember how awful that was? Well Alliance Alive does that the way it was supposed to be done. 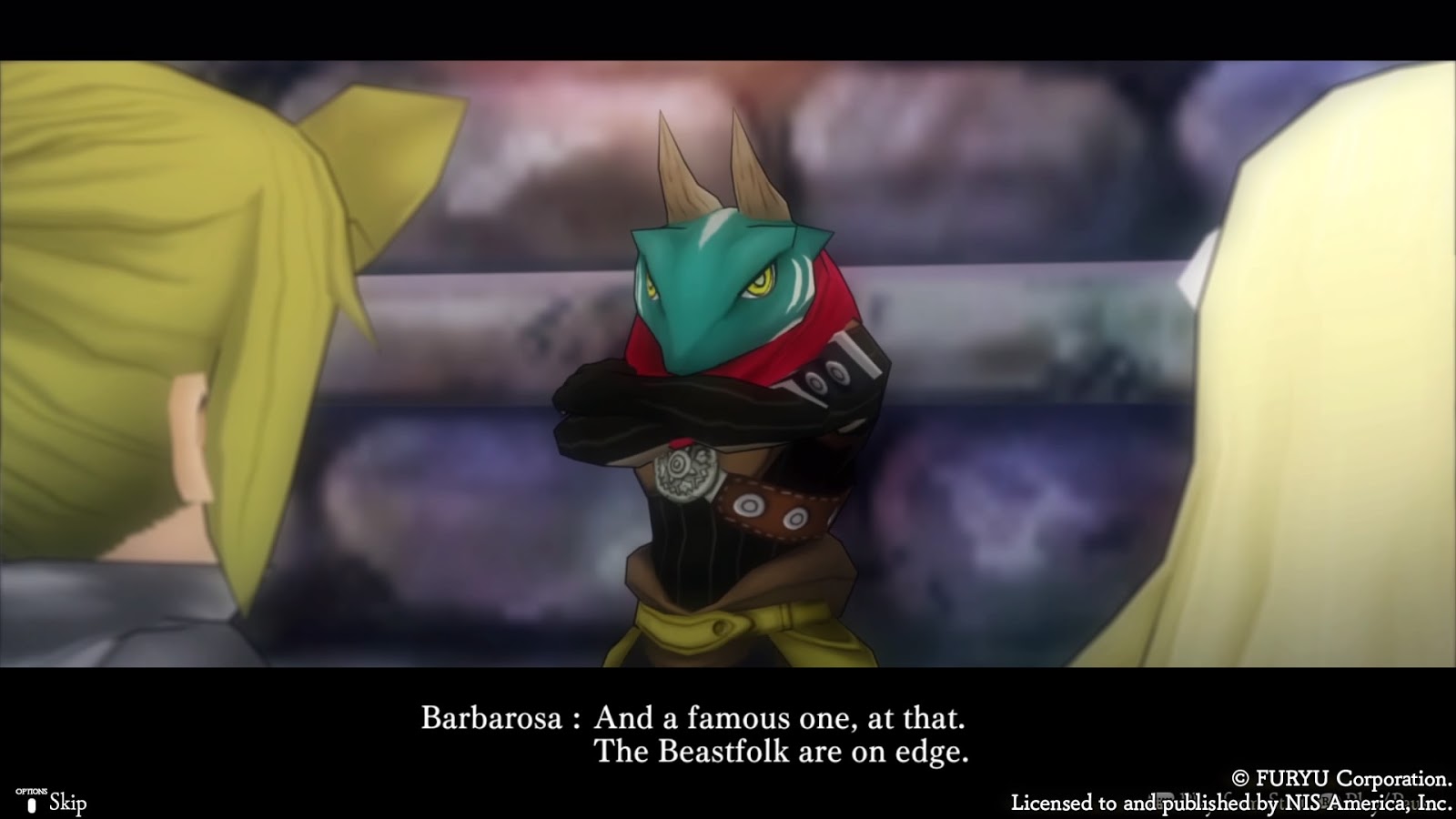 While stats such as they are aren’t affected, your HP and SP have a chance of increasing after battle. As someone who has struggled with RNG like nobodies business, I can assure you that Alliance Alive isn’t as mean as it could be. Although I do question why my healer has twice as much health as my tank, at least they won’t be dying anytime soon. Combat is both traditional turn-based RPG fare, where you select a move for all your units and then you and the enemy whack each other till someone dies, but it has it’s own twist to it. Characters can have two weapons equipped and spells available to them, giving a wide variety of customizable options to bring into battle, each with their own specific skills. The catch is you need to learn those skills through the power of dice rolls. Yup, they’re RNG as well.

However, the more you use a weapon, the more likely it seems you are to learn something new. These skills also have internal levels that you can increase. The analyze percentage increases as you continue to use a certain skill, and seems to carry between characters (although I haven’t extensively tested this), while learned skills per weapon and formation levels don’t. Formation levels also have a chance to increase as you use the skills in battle, and will be affected by what role in a formation that character currently fills.

Essentially you have a 5 by 3 grid, where five is the number of units you can bring to a fight, and 3 is the “location”. The further back you are, then less likely you are to be targeted by enemies. Additionally, you have roles such as attacker or defense that will give specific stat boosts related to the role to the character. Not going to lie, as you unlock more skills with your weapons the game can get kind of complicated in order to figure out what formations you want, when to use skills, what weapons to use etc., especially when you take into consideration that you need to use talent points in order to increase weapon proficiency, rate of unlocking new skills, and rate of increases to HP and SP. 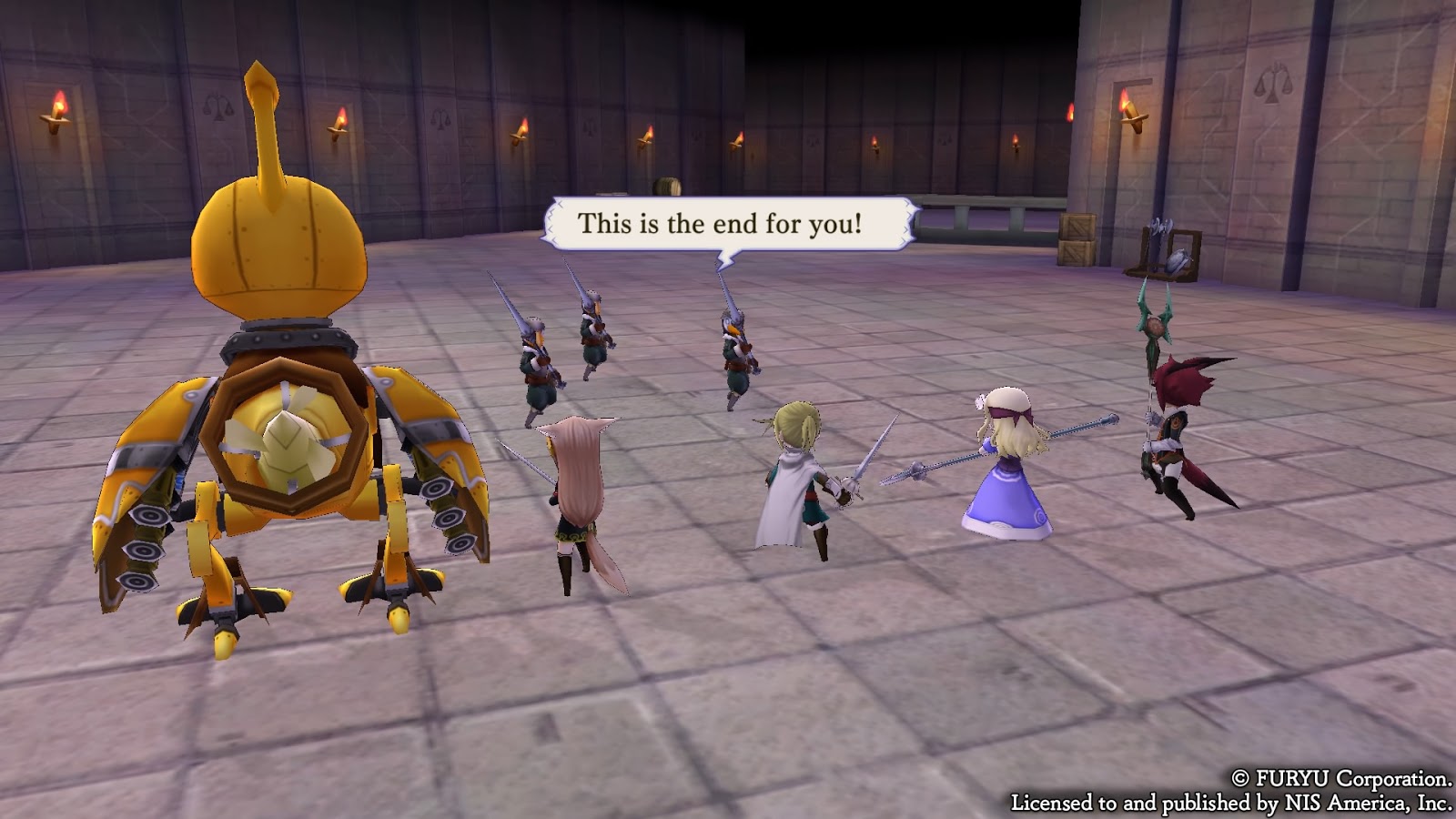 Some of the talents will also decrease SP cost of skills, or increase SP recovery per turn, as stronger skills will require more SP to use. Another interesting battle trait is that if a character gets KO’d, they lose a portion of their max heath until you go sleep at an inn. This freaked me out at first when I thought it was permanent. With the full health recovery after every standard battle though, hopefully this won’t happen too often for you.

Admittedly the combat will get a little tedious after a while, particularly if you’re trying to have your front line units get more health than your rear-guards but their health just won’t go up. The grind is real. Thankfully you can speed the battles up to 4x speed, as well as turn on auto battle which will use the last skills used by each character, provided they have the SP to do so. Careful though, as self-targeting spells only get used on the caster in auto battle. It’s definitely a fun and interesting concept, and there’s a bunch of stuff that becomes available in new game plus to keep you coming back for more if it follows the original.

There’s library entries to fill out, a bestiary to complete, strong monsters that roam the countryside, and plenty of interesting characters to interact with. New game plus is also good for those who really want to see all the different combinations of things you can do, as there are five different guilds to help throughout the game that you may not get the chance to max out the level of during a playthrough. There are a number of guilds in the game, and once you reach a certain point you can start recruiting in order to increase the guild levels and get better bonuses from the guilds. While these bonuses are wide and varied between the different guilds, you can also get in-battle help from them occasionally, if you find yourself close enough to a guild tower. 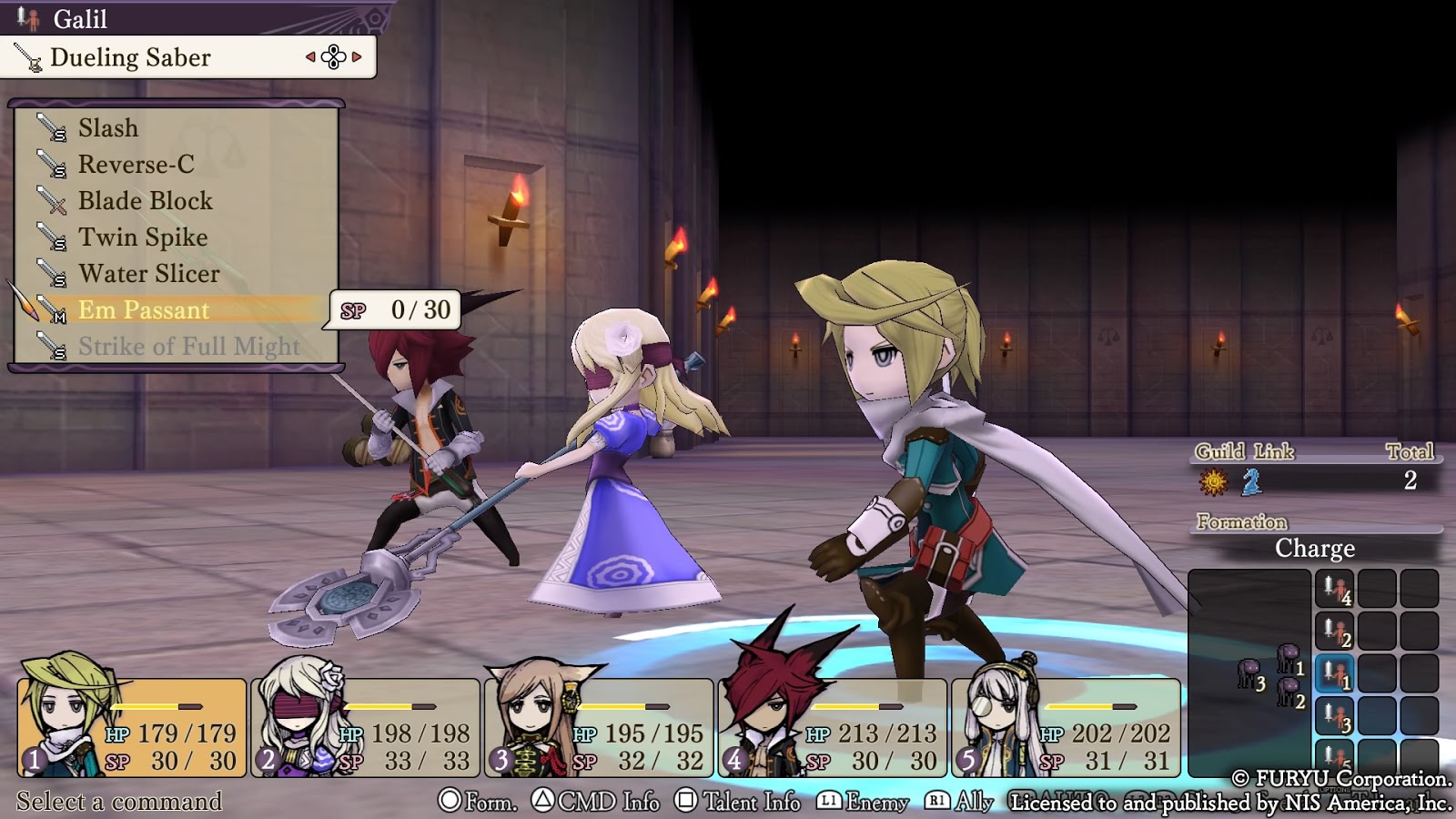 As an HD remaster, and with little comparison to the original, I can’t outright state any gameplay changes they’ve made, but I can tell you that the game looks like it was made for the 3DS, but with a substantially increased graphical quality. The chibi characters are really cute, and the little walking 16-bit characters in the menu screen gave me so much nostalgia. While having voiced characters would have been nice to see, er, well hear, at least the music was good and catchy, so while it felt a little less immersive not hearing the characters voices, at least I could be entertained by the soundtrack. And not the ladders. Oh good lord, trying to go down the ladders in the lava area had me pulling my hair out. One particularly arse-ish ladder took me five minutes for the character to settle on. It would have been a lot better to have the player push a button to get on the ladders, although I do appreciate that you can just “push” doors and such open.

Overall there’s a lot I really enjoyed about The Alliance Alive: HD Remastered. The characters are pretty much all interesting and fun to watch, the soundtrack is good and catchy, the combat system is…trying at times, frustrating occasionally coupled with pleas to RNJesus, but definitely something that had me hooked. I appreciate the fact you can change formation mid-battle at no penalty at the beginning of your turn, particularly if you choose a wrong formation, no sweat, just choose another. One of the best things though is the handy guidebook. Easily accessible basically whenever, it stores all the info and tutorials you need, and I was definitely referring back to it often as I was playing.

As someone who has always loved a good RPG, I was not disappointed in The Alliance Alive at all. Yes some parts got a little frustrating at times, but that’s part of what makes the experience something you remember. While maybe not as portable as its 3DS brethren (at least for the PS4), the HD remaster is definitely a crisp and vibrant addition to the JRPG scene that I just couldn’t put down.