You are reading
The Ninja Saviors: Return of the Warriors – PS4 Review

It is hard to deny that The Ninja Saviors: Return of the Warriors is a fantastic callback to older quarter devouring arcade machines of yesteryear. With everything from cyber ninjas to a pulsing, heavy soundtrack to a dystopian future, this title oozes 80’s charm and fun, fast, but challenging gameplay as well.

Something of a remake to something of a remake, the original Ninja Warriors was an arcade machine circa 1987 that was remade / updated / kind of made into a sequel for the Super Nintendo back in the mid 90’s. This latest iteration, The Ninja Saviors: Return of the Warriors, show influences from both. Visually, it is closer to the Super Nintendo title, right down to its introduction. In terms of the graphics, it is an interesting mix of pixel constructed backgrounds and smoothly animated characters. It looks retro at a glance, but with the kind of detail, movement on screen and numerous simultaneous characters that is only possible today.

The actual gameplay is both simple and accessible, but also surprisingly deep and challenging. The Ninja Saviors: Return of the Warriors is a left-to-right brawler at its core, but one of the key differences from some of the most popular ones over the years is that it takes place on a single plane. That means no sliding up and down a half an inch at a time to punch or kick your enemy, hoping the walk into it. Here the combat is a bit more linear, which makes it harder to lead enemies into cheap hits or deaths. 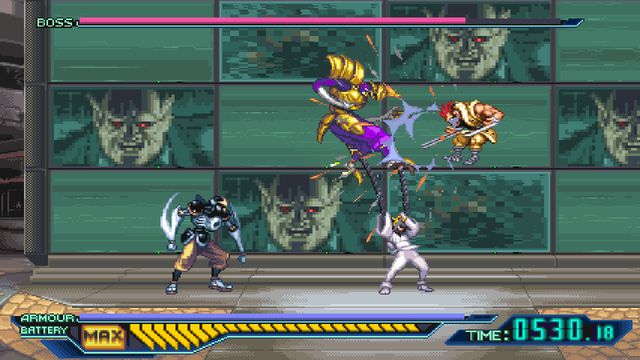 Essentially you have a battery that charges as you fight – as long as you do not take any serious hits – and this battery allows you to trigger off a large area attack that hits everyone, or a slightly more measured special attack that targets a direction or single opponent. The majority of the time, you will be jump kicking or trying to string a series of rapid attacks off on an opponent or cluster of opponents. Many of the typical patterns you see in other beat ’em up games show up here. Defensive characters that block or try to bait you into chasing them, aerial attacks, ranged attacks (which do feel a bit cheaper given the flat playing field) – things along those lines. Seldom is a single non-boss opponent a major challenge to your armor / life bar (you have one bar and one life, so there is not much in the way of forgiveness if you have a rough five seconds of being ganged up on). It is usually a combination of different enemies that keeps you on your toes.

The environment is a factor as well, for a few reasons. For one, there are objects that can be thrown and they do some pretty substantial damage. They are wasted on the one-hit enemies that streak onto your screen but can be substantial in a boss fight or against a slightly beefier regular enemy. There are often other aspects of the environment that can ding your health, such as rockets that launch into the sky from the background, creating small shadows on the ground a moment before impacting. The good news is, enemies can be roughed up by these environmental hazards as well. This imparts a certain amount of strategy to how you handle the masses – and stay alive yourself. Meanwhile, boss battles are brutal to start, though after a time or two fighting each one, I started to understand what the best approach was. Trial and error – like the old days. This is not the most challenging game, despite Ninja Saviors: Return of the Warriors recalling the quarter munchers of old. While you are armed with unlimited continues, they do take you back to a checkpoint, not dropping you right into the fray to continue exactly where you left off. That being said, this is not a long game – eight levels seems like a standard of many older fighting games and that is the case here as well. They are not terribly long stages, and maybe that helps cut down the repetitive nature of the combat. 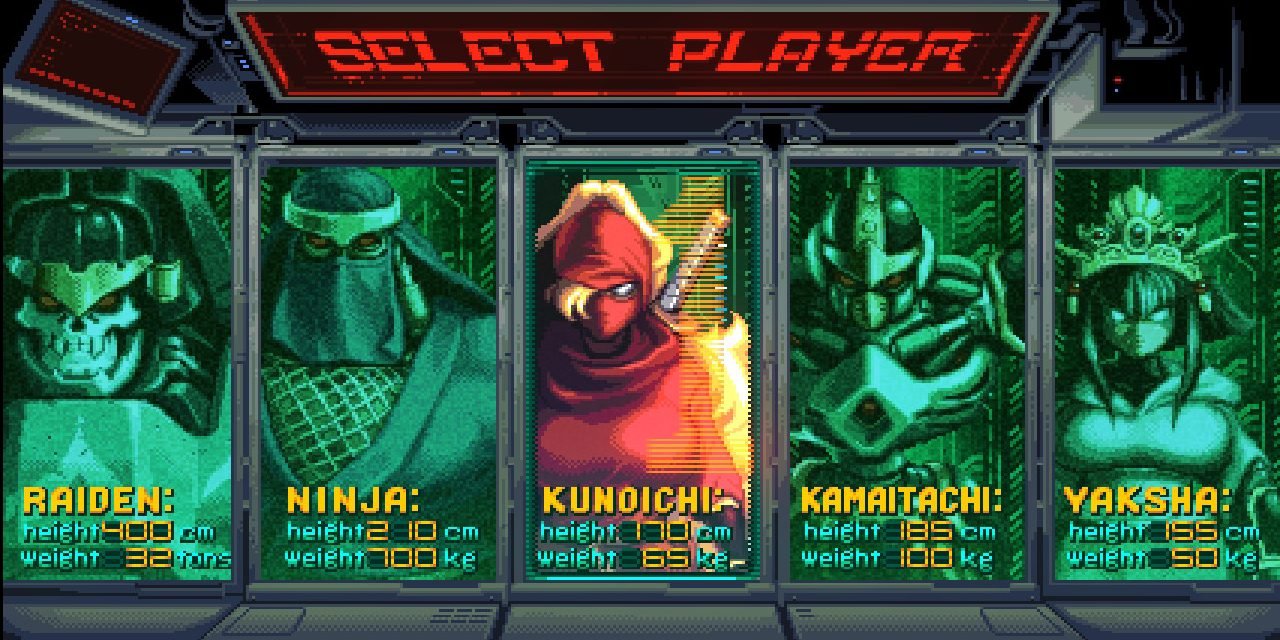 One major item that helps to keep the combat fresh is that the three characters (to start with – you can unlock two more by beating the game on its two difficulty levels – these are new to the game with this release) are really quite unique from one another. The models are the normal standbys with a big bruiser, a super quick hitter and a slightly more in the middle, acrobatic character. These three archetypes are pretty common, but they are handled well here, with more than just speed or striking power being nominal differences. The special moves, the ease of grabbing and even what the striking combos are like make these characters rather distinctive to play.

Another feature that players should enjoy is the co-op option here. It is rather interesting, because it does make the game easier to have a friend to help manage the crowds, but there is a unique twist here as your two ninjas share a single battery and armor bar. That means if one of you gets careless, the other player can be penalized for it. In terms of major changes however, the visuals, extra characters and this two player mode are the bulk of it. This coupled with the relatively short time to completion will no doubt disappoint some, but the overall package is still an entertaining one. 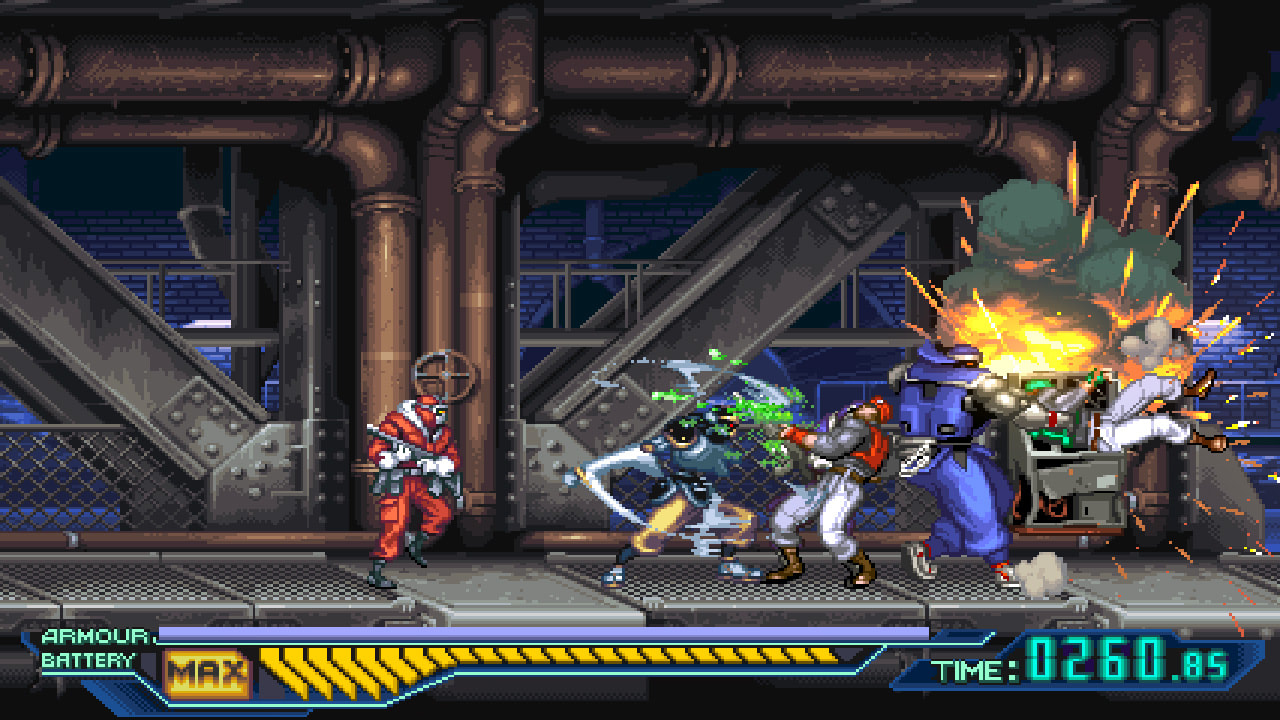 The Ninja Saviors: Return of the Warriors gets a lot of things right with its presentation, quality action and fun co-op mode. It is that rare fighting game that is both accessible and yet deep as you learn how to best use a character. The updates here are somewhat minimal, which just goes to show how good the original game really was. It is still a great deal of fun for those who have an old-school brawling itch they need to scratch.