Taking it from the top, Destiny Connect is the story of Sherry and her quest to save her town from being annihilated by robots that used to be friends with humans. Judged upon the actions of a few, almost all robots were decimated thirty years before the beginning of our tale and they are back again in full force to take revenge on the humans that discarded them even if they were on their side. Touching on a theme that only brings a smile to my face, probably because of my age, the date is new year’s even 1999 and instead of worrying about the Y2K bugs? Sherry has to worry about her world coming to an end!

Finding out that it’s not enough in order to stop the robots in the present, Sherry, her father’s robot Issac and her childhood… best friend? Pegreo are going to have to travel in time in order to set things right. Meeting up with what can only be described as a mad scientist, the group acquire the ability to time travel and what should have only been thirty seconds into the future, turned out to be thirty years in the past.

Time travel is a tricky one and I’m not talking about Chrono Trigger or Back to the Future. It’s really, how do you do it right? How far do you go? Going more in line with Back to the Future though, Destiny Connect is all about time travelling both forward and backwards in the same location through time in order to save it. It’s not about the world, it’s about her town and being able to move about while others have been locked into place as time stands still, Sherry isn’t having any of it, and thus, her adventure continues. 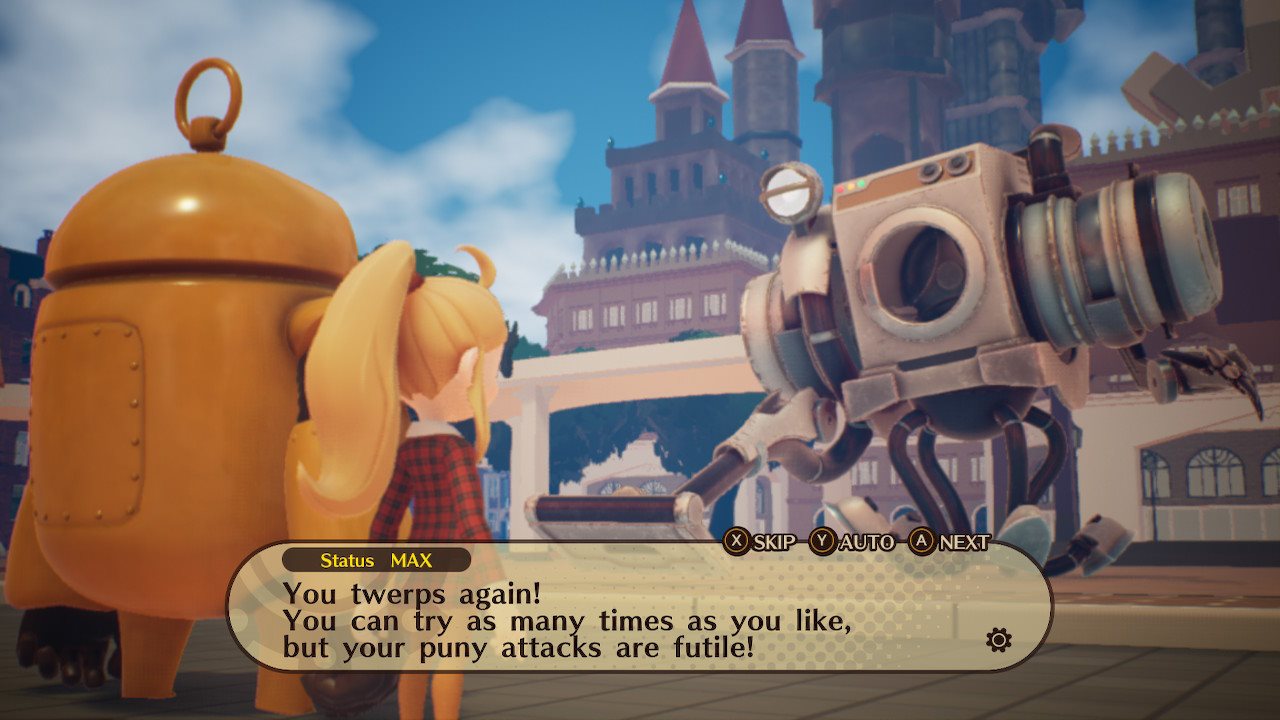 While chatting with Richard about Destiny Connect, as his PS4 review is going to be coming out later this week, we both felt that things were a bit dated for nearing the end of 2019. Feeling to be like it could fit into the late PS2 era ballpark alongside Radiata Stories, it does have a charm even if it never feels like it will excel in the realm of JRPGs. It uses bright colours even in the most dismal of areas. It has a cast of characters that look friendly or “cute” even if they are killer robot appliances. It’s charming in its old schooled-ness and it does provide a good enough time even if it does nothing new.

Each part of the town, or city as you come to realize because of how much space it ends up spanning, is traversed on foot through streets or pathways. Some areas are larger than others, but for the most part, the way that it’s been designed is to make you need to either run into enemies to get by, or to really learn how to ninja past if you truly do not want to have to deal with them at that moment in time. Each area is really straight forward leaving next to no chance of getting lost unless you take that one little curve here or there and forget which way you came from. Short of fighting near the beginning in Save the Queen, a shopping mall that really makes me think of the makai series’ Rosenqueen, you’re really on rails from one cutscene to the next.

This isn’t necessarily a bad thing, but I could have used a bit more exploration to go with the grinding. While in a lot of ways Destiny Connect feels like an RPG lite, where you’re just here to enjoy the story but every now and then, it throws you a curveball of a large enemy or a boss fight that needs you to have leveled up your characters. Leveling up itself isn’t enough though. So while you get experience to raise your character’s levels, the grinding becomes a little more real in order to power up each character’s abilities that can only be done with items from defeated foes. Never sure how many of these items that you are going to get, they come in denominations making it either really easy to level up your skills or really hard if you keep getting the basic ones. 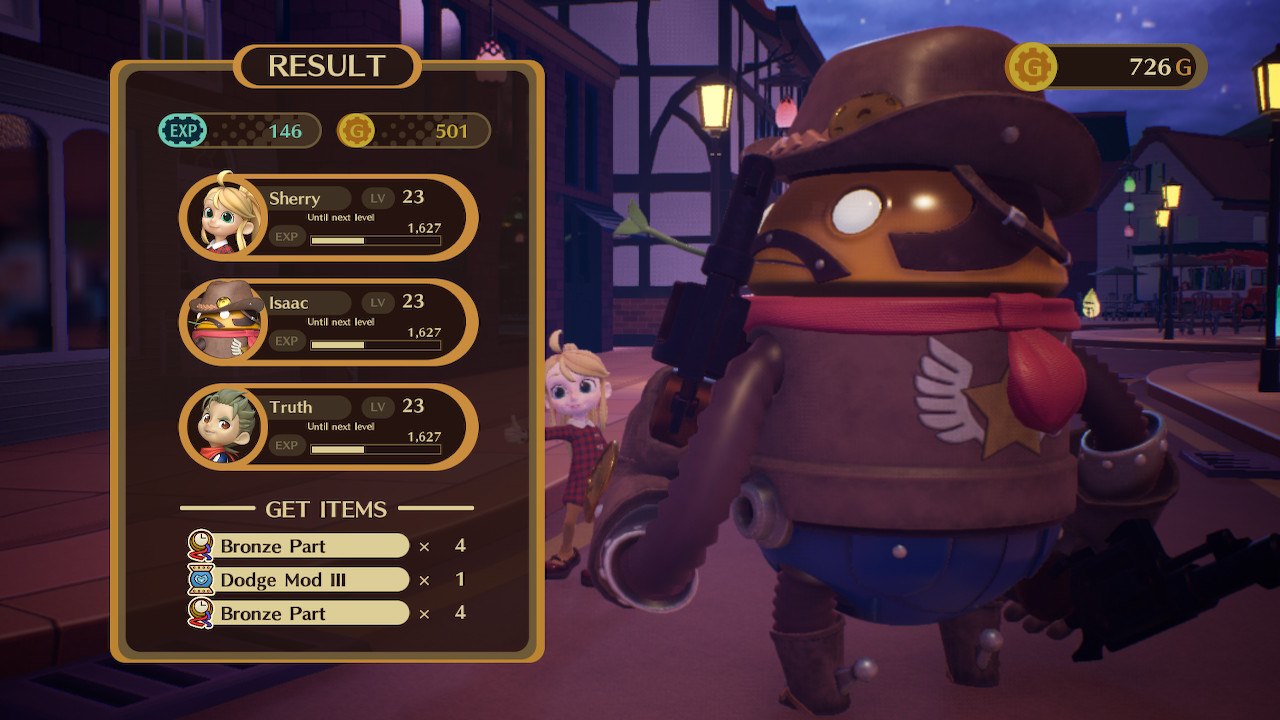 Where things are a tad spiced up, is that Issac can go through transformations in order to make himself more versatile. Starting off with the Guardian mode, you eventually gain access to others like that of the Desperado that excels in critical hits to that of the boxer that specializes in accuracy and speed. It doesn’t sound like much but it is important because if Issac dies in battle? That’s game over! Taking a note from the Persona series, it sucks if Issac is taken out because you were in a form that soaked up the damage instead of deflecting it. Healer mode, does not like electricity…

Otherwise, that’s really all there is too it. Destiny Connect: Tick-Tock Travellers is a cute RPG but it doesn’t do anything new. Adding to a bit more of the I would have enjoyed side of things is that there is also no voice acting whether Japanese or English. Short of the fun soundtrack, it doesn’t hit the notes that it could have, especially with the over expressive characters and the faces that they make. There are some other notes that I would want to make especially in regards to the cast of characters that join up or who are met, but that goes into way too many spoilers. Needless to say, it doesn’t take long to come together and make you wonder how long it’ll take for things to be noticed. 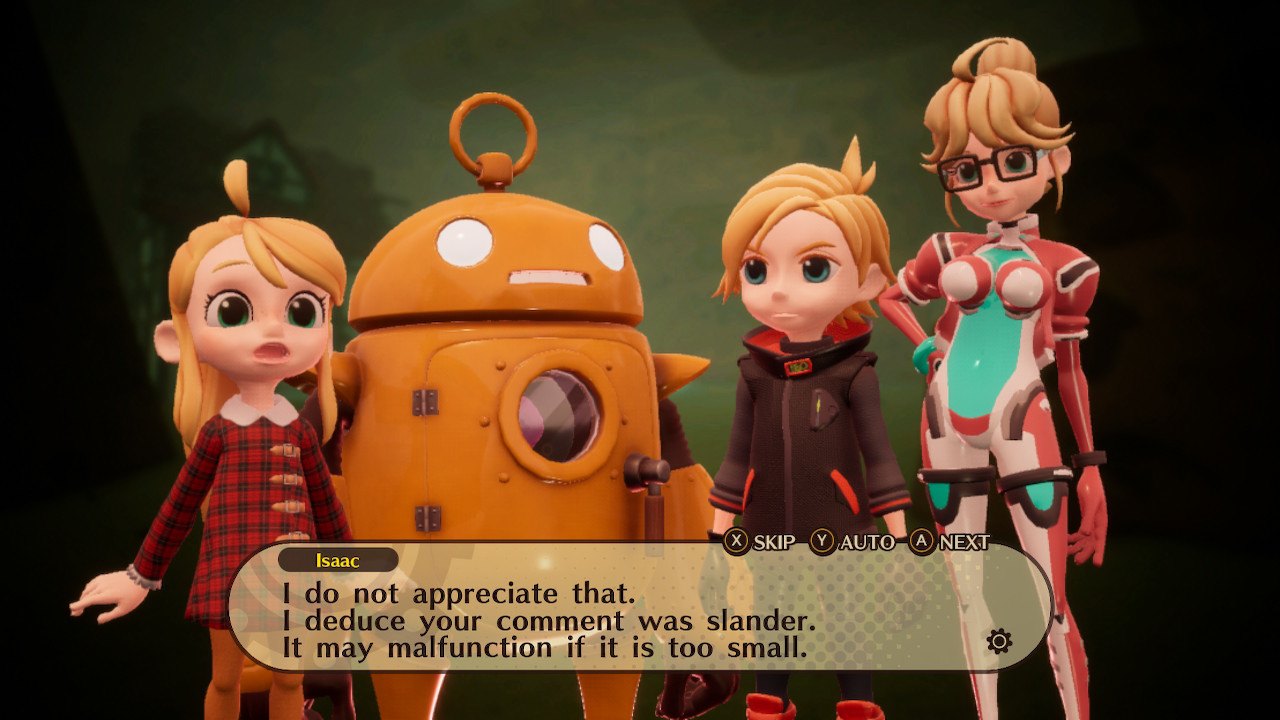 Overall, Destiny Connect: Tick-Tock Travellers is a fun little RPG for a good sunday afternoon or three that can be easily sat down with a cup of tea. Never too hard, it’s really a throwback to an easier time where things were made to look pretty and be relaxing instead of crazy hard and needing mad skills to complete. That all said, it is a cute adventure and is worth exploring.