You are reading
Sega Ages – Columns II: The Voyage Through Time – Switch Review

While Sega Ages – Columns II: The Voyage Through Time works with a somewhat simplistic concept for a puzzle game, the execution of this title makes it a good value for fans such as myself who have strong feelings of nostalgia for the Columns series.

I have a ridiculous soft spot for the original Columns game. When my uncle first bought his SEGA Genesis a million years ago, this was among the first three titles he had with it. That in and of itself made it really memorable for me, but it was also one of the only games I could get my dad to play with me when we were over at my uncle’s house visiting. My dad played a lot of the games I had for my old TI99/4a from when I was a little kid (it was very Atari-like in its library), but when the Nintendo Entertainment System released, he did not care for the Mario Bros. and Metroids of the world. Duck Hunt and Tetris were about the only titles my dad enjoyed playing, so we bonded over those games.

Seeing as Columns was in the same vein as an action / puzzler, I enjoyed that he was willing to fire it up and play it with me. The concept itself was pretty straight forward, basically serving as one of the first instances of match-3 gameplay. You could shift the descending column of gems into different orders, lining them up vertically, horizontally and diagonally to score points and make the gems disappear. So why am I spending so much talking about Columns when this is a review for Sega Ages – Columns II: The Voyage Through Time? For one, the core mechanics are still in place, secondly to explain why I have such an affection for the series, but lastly: the original Columns is included as a mode here. 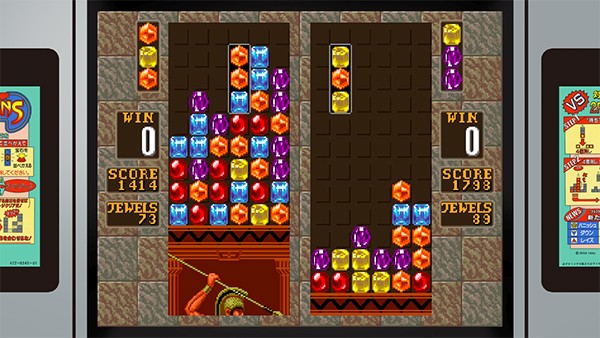 The original Columns is just an play game where you you try to survive as long as possible while racking the up highest score that you can. As for Columns II, you have a couple of modes to choose from. Flash Columns is focused on trying to clear out a flashing tile on the screen. You need to make matches to dig through what is there until you can match that flashing column and complete it. Vs. Columns is a bit more like the first title in that it is an endless mode where you are trying to keep the pile from reaching the top of the screen. A nice touch is that avatars can be collected and then used for the online multiplayer mode as well.

There are some additional features baked into these modes, such as stage select, making is so annoying unmatchable skulls do not appear, things like that. Probably the coolest Switch-specific feature is the idea that two people will be sharing one unit in portable mode, sitting on opposite sides of it so you can flip player two instead of having to sit shoulder-to-shoulder in front of the small screen.

The overall presentation is an effective, if fairly simple one. the various gems go from the more polished, shiny look of the first Columns to a more detailed view in the sequel. The music has a sort of haunting, echoing quality at times that given the many, (many many) hours I spent with the titles decades ago still rings familiar to my ears. It can be a little repetitive, the soundtrack is somewhat limited, but I enjoyed most of the songs more than not. 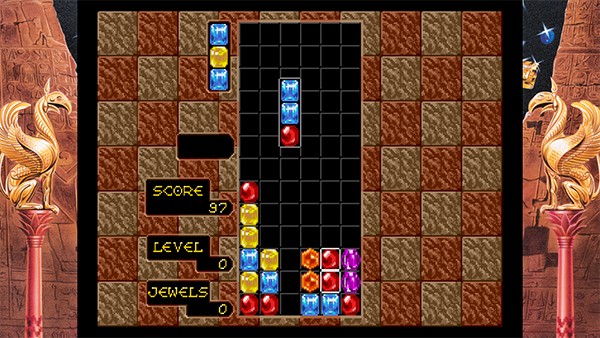 The gameplay mechanics are simple but effective. Most good puzzle games have a relatively low bar of entry, and keep you hooked with challenging, thought-provoking gameplay. Columns I and II were really innovative at the time, at least for someone like me who had not played any match-3 games before them. However, by today's standards they are pretty mundane, as we see a lot of more advanced match-3 titles out there on every device known to mankind. There is little progression outside of a few nominal unlocks however, making this a somewhat shallow, shorter-lived experience. After a handful of hours, you will have experienced pretty much everything Sega Ages - Columns II: The Voyage Through Time has to offer. What is there is certainly entertaining and as a classic offering, should appeal to people such as myself who have fond memories of this type of game or just enjoy puzzlers in general.