There is a great deal to like about this city-builder / simulation title, as Frostpunk delivers on multiple fronts. There is a great narrative here, complimented by engaging mechanics and a plethora of incredibly difficult choices and wrapped up in excellent visuals.

Frostpunk kind of reminds me of The Last of Us.

Not because of the gameplay or even the setting as the two games have nothing to do with one another on the surface, but thematically both games touch on the idea of hope and do so with dark, brooding atmosphere. Both titles also challenge the notion of what makes a game fun or entertaining to play, as there is an oppressive weight to both throughout, but that did not cause me to put the controller down as I played The Last of Us and I certainly had a difficult time stepping away from Frostpunk as well.

This is not the first time media has explored the idea of a sudden and unforgiving winter that never ends (Snowpiercer comes immediately to mind), but Frostpunk handles it better than most. The opening cinematics and storyline do an excellent job of portraying a group of people doing what they must to survive a winter that might make the great north in Game of Thrones seem like a pleasant spring breeze. Temperatures have fallen so far and so fast that most people never had a chance to survive it, and your ragtag group of travelers do everything in their power to reach a remote reactor that stands as their only hope.

Upon arriving at the reactor site however, hope is immediately tested as no one is there and while the reactor itself appears whole, it is not currently running. This sets the foundation for what comes next as you take your collection of workers, engineers and yes, even children, and start to collect coal so that the reactor can be fired up. The location itself is set into the ground, helping to shield it from blasts of arctic wind but still susceptible to the overall environments. From here on out, you have a continual tug-of-war that you need to try and manage as you balance resources against the need to build and create new things while trying to give your people hope and attempting to mitigate their discontent. 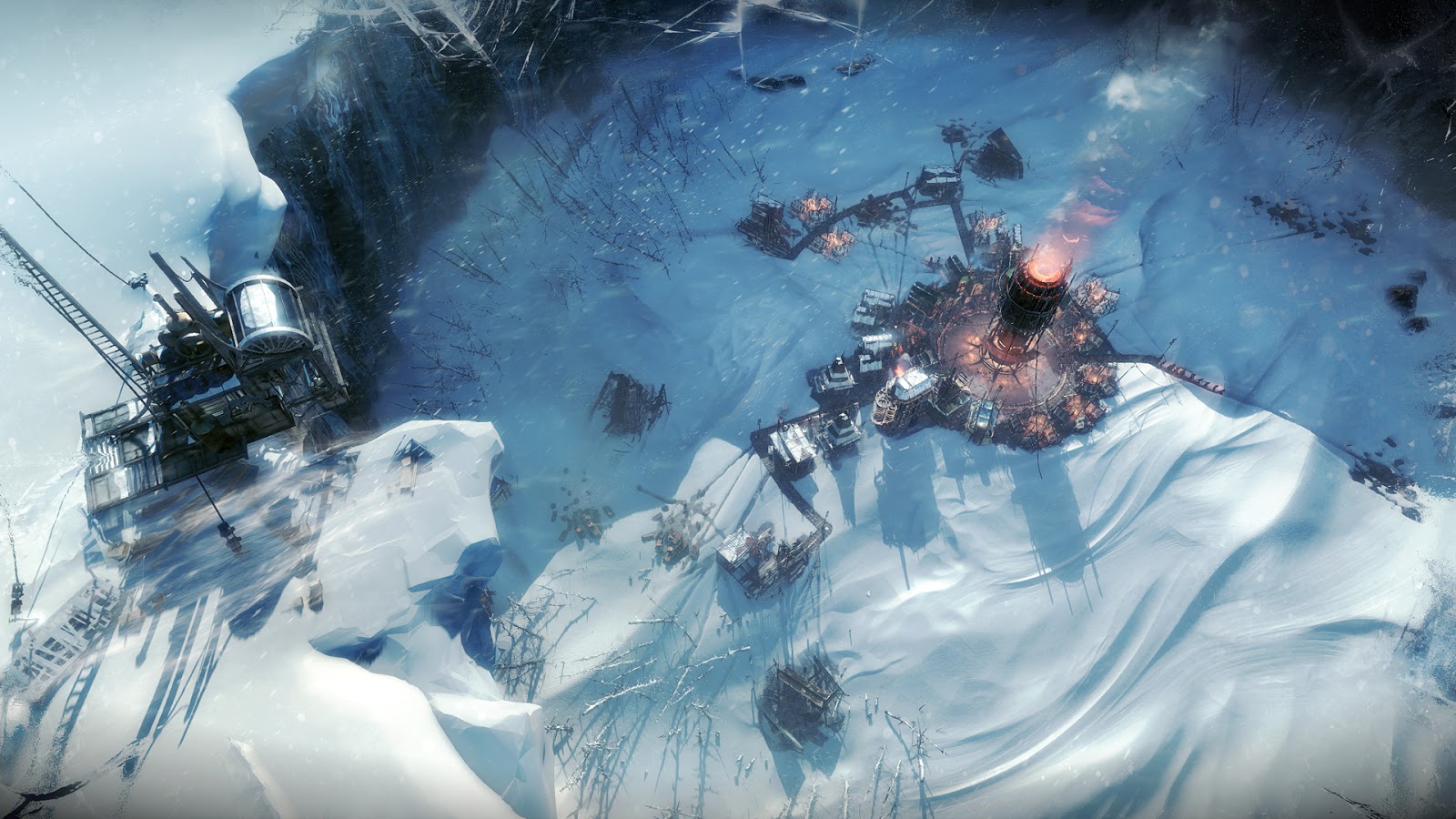 Frostpunk is one of those titles that just continually made me feel like a bad person, or perhaps at least a bad leader. Very seldom are there good choices to be made, just less terrible ones. Early on you have a member of your people who suffers a severe and you are faced with a dilemma: amputate against the man’s wishes, or let him ride it out as he requests despite inevitable death. Neither outcome ends particularly well, but both start you down a path towards instituting new laws. These laws are important, as they provide guidance during difficult times. You can only set new laws every so often, and many times there are two sides to each coin. Do you want to have improved work efficiency by letting children assist with potentially dangerous tasks, or do you let them stay in the relative safety of the reactor’s heated shadow offering a much more marginal assist to your doctors and engineers? People will like the latter option more, but you will have fewer hands on deck to assist with the heavy lifting that needs to be done, opening you up to more likely failure.

The sound design is nothing special really, but the visuals are really solid. At first glance, they did not blow me away, but over time I began to appreciate the various small details from the paths made in the snow by my workers until streets were made, to the intricacies of the various building types. I generally spent most of my time zoomed up and out so I could see more of my region, but every now and then I would zoom in just so I could appreciate the activities that were taking place. One of the best quality of life items is the ability to pause and play at varying speeds so that when you really need a few moments to consider your next actions – you have it, but by the same token if you are just trying to churn through a day and get some work done, you can play in very fast forward.

Generally speaking, this is a very menu-heavy game, which can always be a dicey proposition with a controller. This feels like a game that was designed with a mouse in mind, but the controller scheme works well enough. It is not as precise, but the controller does get the job done well enough. I do wish that the game explained some things in a bit more detail early on. It is interesting because there are plenty of tutorials, and maybe it was just a pacing concern, but my first playthrough was largely educational as I made lots of mistakes along the way that made it impossible for me to sustain my small city. Interestingly enough, my second playthrough, armed with a lot more knowledge, really did not go much better. It was not until the third or fourth time that the various gameplay elements fully came together and clicked for me.

One of the more interesting aspects of the game are the hope and discontent meters shown at the bottom of the screen. Most of the time, those two meters move somewhat in sync with one another. Have your explorers make a great discovery or complete a request of the people, and you will see hope rise and discontentment fall. However, some decisions move the needle in opposite ways, perhaps giving people some hope, but in the process making them unhappy with the current circumstances. It was early on that I realized I could not always satisfy the needs of the populous. Every now and then, they would come to me with a demand such as building a new medical center. I had the resources and space, so I would of course build it… only to short myself those resources a bit later when I needed something far more desperately. 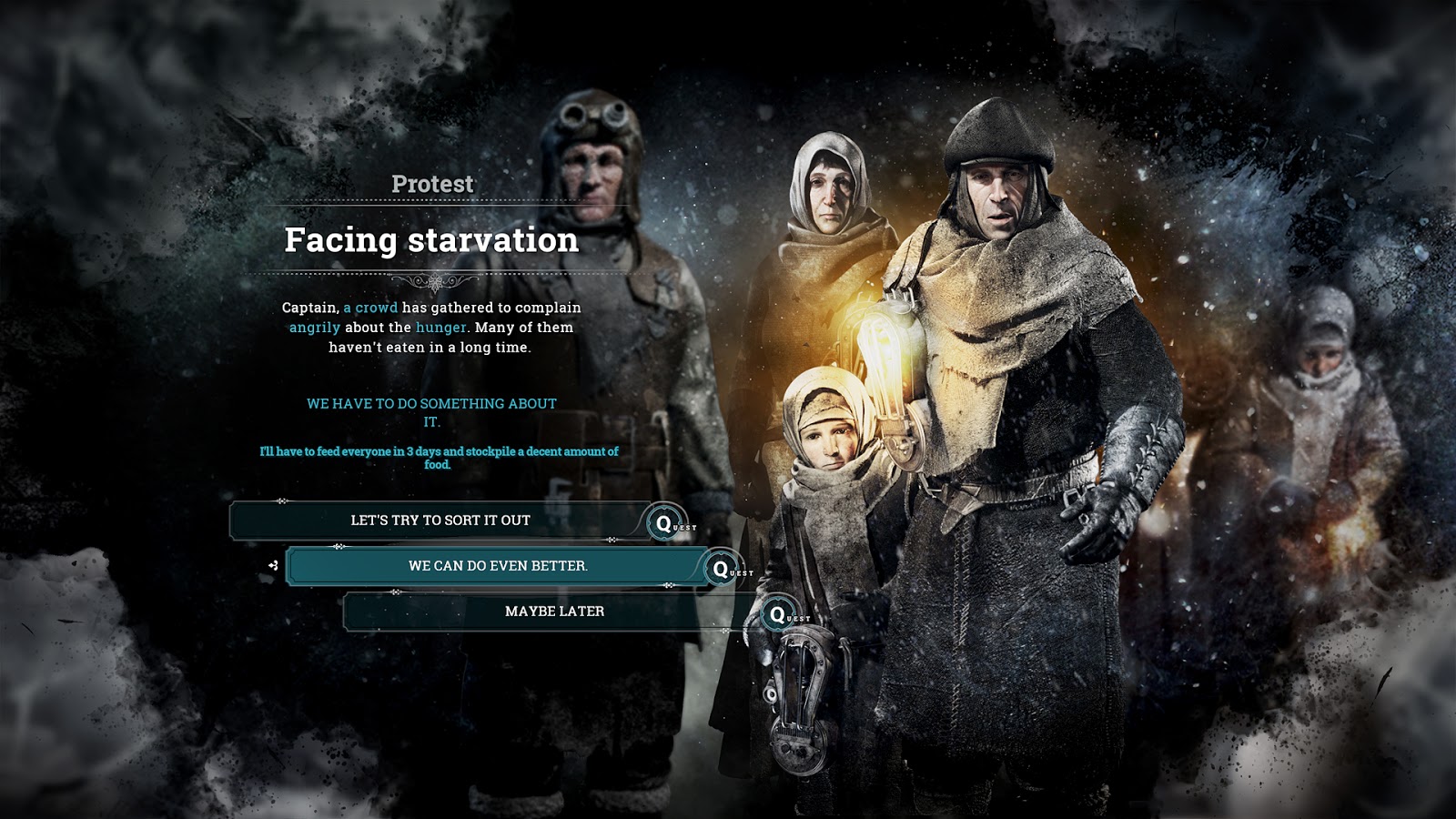 Frostpunk is a perpetual balancing act that ratchets up the stress at regular intervals and continues to throw surprises – most of which are in some fashion unpleasant – your way throughout. Just when I would hit my stride and think that I have things under control, some new disaster would hit and I would be left scrambling. The atmosphere is certainly a heavily melancholy one, because so often you are picking the lesser of two evils as you decide what to build, which laws to enact or what technology to pursue as your decisions all create new opportunities, but come at a cost of workers, resources or in some cases – hope. Storms will rage in, lowering the temperatures as you have to weigh whether or not to have the reactor burn more coal and for how long to combat the new, even colder conditions as an example of the way things can change without a lot of notice.

One other area that could have used a bit more elaboration would be the modes. A sandbox mode of some sort would have been appreciated. Additionally, other stages / modes cannot be accessed until you have reached certain points in the primary storyline, unlocking them. The ability to unlock and jump to those points is rather nice, but it means a lot of grinding through the same initial sequences early on as you learn the ropes.

The slower pacing and somewhat lacking early tutorials give Frostpunk a somewhat high barrier of entry. Do not go in thinking you will be successful right off of the bat. This is a challenging game with some uneven difficulty spikes that can feel punishing and even unfair at times, but the capability to rebound is almost always there, so long as you respond quickly and decisively. Frostpunk will not be for everyone, but fans of survival or city-building games really owe it to themselves to give this one a try now that it has made its way from PC to console.