Earth Defense Force: Iron Rain is an interesting and corny run and gun game brought to us by Yukes. Full of corny dialogue, giant bugs, and fancy powered mech suits, Iron Rain certainly throws that nostalgia of low budget sci-fi movies at you.

You jump into Iron Rain as a nameless soldier in a fight with an invading horde of aliens in the form of giant bugs. Or at least, I think so. The Earth has all but been taken over by the alien invaders, and it is the job of you and your combat team to fight back against the invaders, as well as the rebel group that’s stealing all your resources.

With the aid of your fancy powered suit, you also have weapons with energy clips you can blast your way through some seriously oversized bugs. Iron Rain is pretty standard fair for the run and gun style of game: you’ve got two weapons that you can switch between, both changeable at the mission select screen. You also have a couple of different rigs to choose from which have different abilities. For instance the ones you start with give you a dash to use as a dodge or a flight rig. 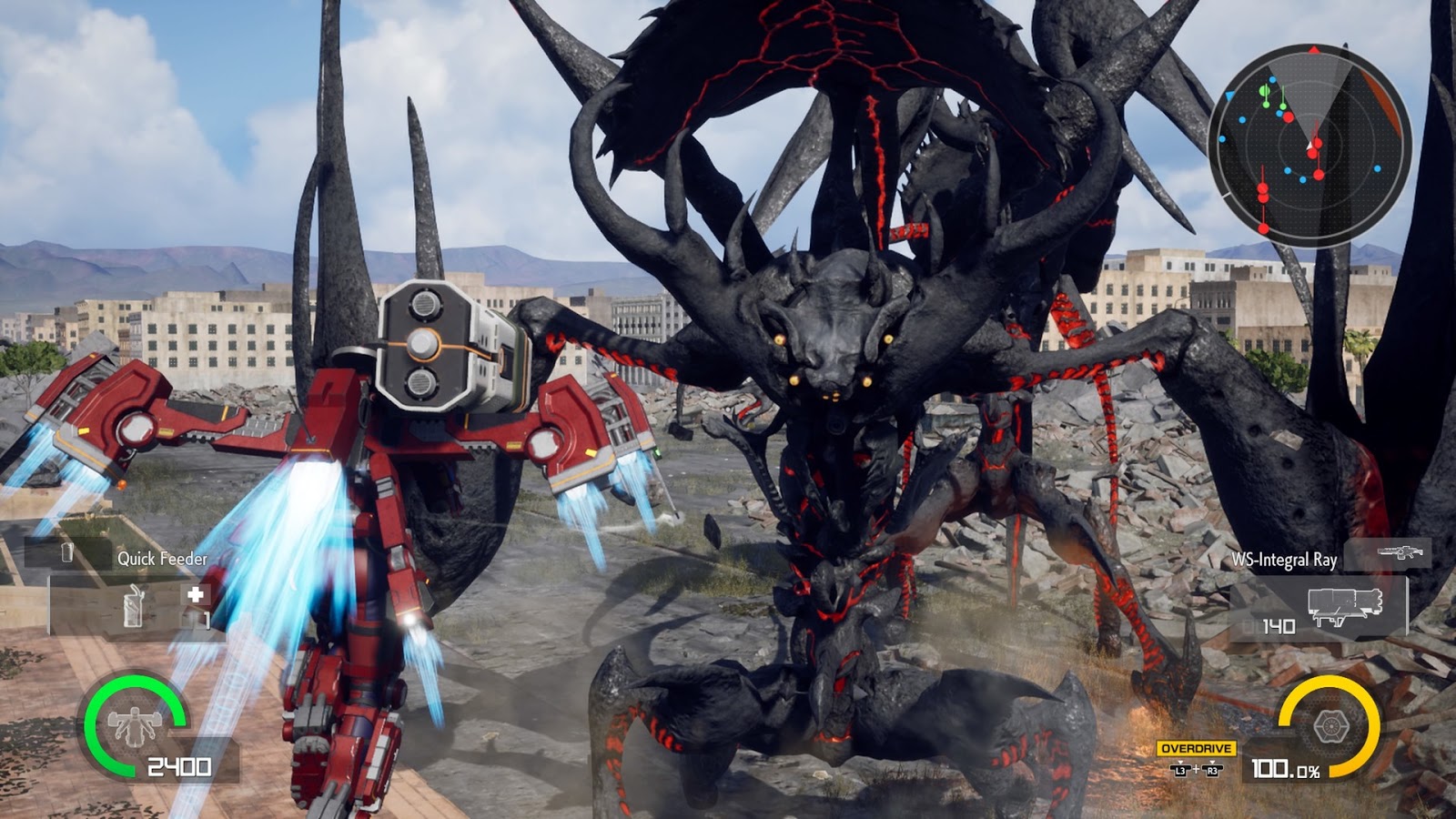 Items you can bring into missions with you, such as healing items and items to revive your teammates can also be acquired through spending the cash you earn through killing the aliens. Sounds fun, right? Well, it would be if there weren’t a few glaring issues. First up, any of you played the Mass Effect games? Remember how awful the Mako controlled? Well, vehicles in this are worse. So very, very worse. The vehicles, especially the tank, controlled like a shopping cart with the two back wheels locked, with the weight of a freaking throw pillow.

Enemies are both really weak and ridiculously tough. Not because they’re particularly great at beating you up, but rather the combination of the enemies having some seriously precise homing shots and the ability to sandbag you make for some rather unfortunate situations. There were a couple of times where I got blindsided by an enemy and then swarmed, only to have the rest continuously knock me around.

While you do have a sort of overdrive that blasts enemies back for a bit, they can still rather promptly overrun you. There is a wide array of weapons to choose from, but after doing a few missions, I found a set I liked and didn’t really have any reason to change off of them unless it was to purchase an upgraded version. The stages are also rather same-y for the most part. By the end of the third stage, you’ll probably have a good idea how the rest of the game will play out. 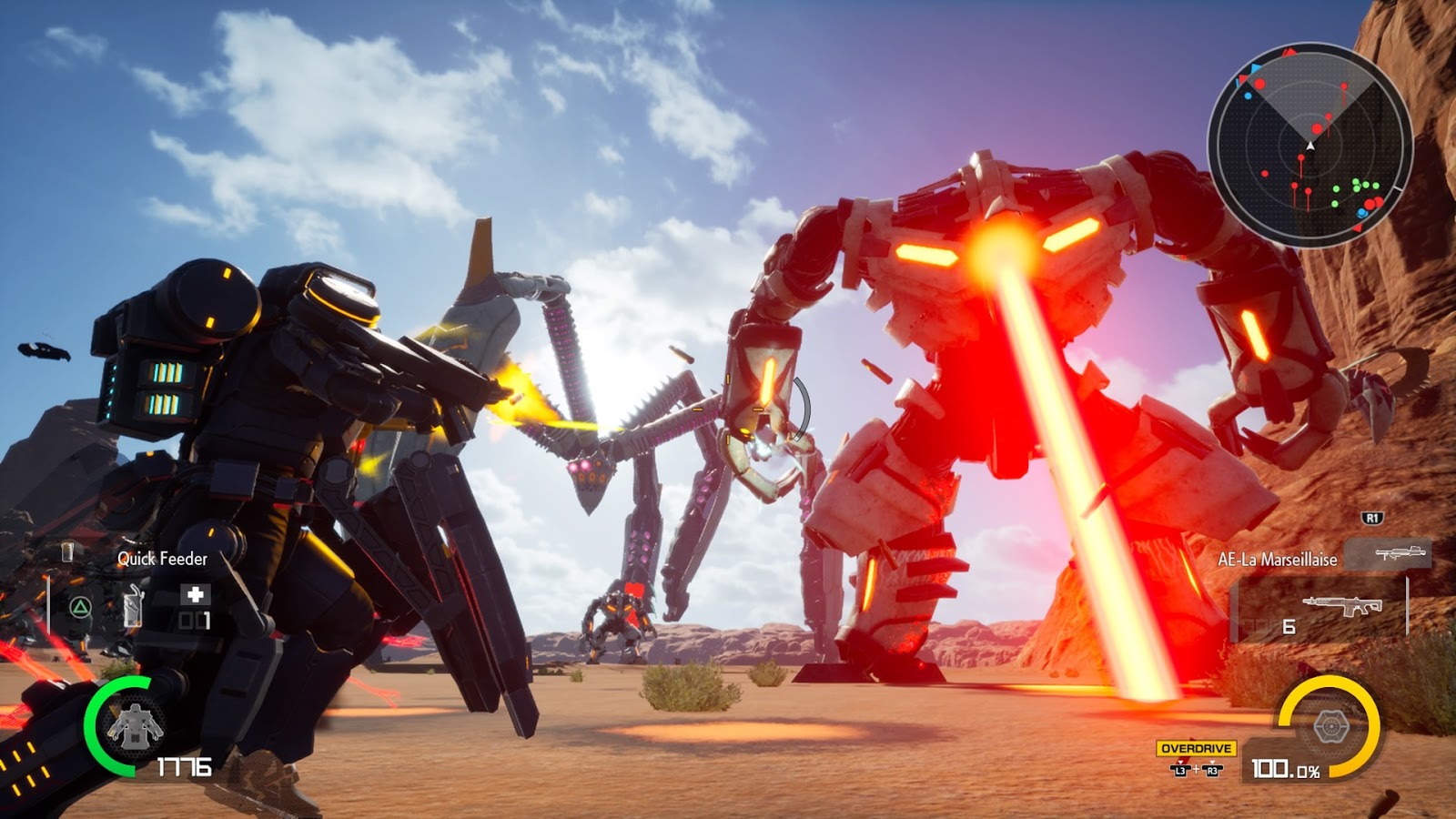 While Iron Rain does offer some rather entertaining gameplay and a decent array of weapons and customizable appearance, the missions mostly just feel repetitive or a struggle due to unfair enemy sandbagging. Ally AI characters are insufferably stupid, more often shooting out into nowhere rather than at enemies, and tend to walk in front of your fire. And yes, you can KO your allies through friendly fire. Stages also tend to produce a lot of lag, although not really consistent between stages. For instance, the last stage I played before writing this had a huge lag spike every 4 seconds almost exactly, whereas the stage before was intermittent throughout.

Overall, Earth Defense Force: Iron Raid is rather lacking as a whole. While the gameplay is ok and I don’t particularly mind repetitive stages (heck, I finished Robotron 64), some of the unfair situations you can get into really put a damper on it. While not unplayable, the combination of choppy frame rates and frustrating mechanics leave you feeling like Iron Rain can often feel like more of a demo than a full game. While I would recommend picking it up if it’s on sale or packaged with something else, I would be a little more reserved about getting it flat out, unless you’re a fan of the series or are looking for a multiplayer game to play with your friends.