Taking up events seven years after No More Heroes 2, Travis Strikes Back has our assassin once again come out of retirement to fend off against Badman who’s out for his head. Having previously killed his daughter, Travis fights against this family once again only to be pulled into a video game universe where everything is about death and portable toilets are still your save points.

The only admission that I have to make is that I have not played No More Heroes 2 as by that point I had moved away from the Wii and into both the PS3 and the Xbox 360. So because of that, I needed a bit of a catch up course in order to fill out the gap that I had between NMH 2 and NHM 2.5 (which is this). Honestly? I didn’t even need this as for the most part other than a bit of context why Travis is out in the middle of nowhere playing games in a trailer? It’s not important as the real world is stripped away before you even get to swing your beam saber around.

Sucked into a video game console world called the Death Drive Mk II and told by Death himself that he would end you if he had the damned credits to do so, it doesn’t take long for you to get moving in the digital world. Unlike No More Heroes, and No More Heroes 2, Travis Strikes Back takes a more isometric arcade beam ‘em up view (heh see what I did there?) to lay the smack down on anything getting between you and winning the game to make it out. It’s over the top, but it’s par for the course with this series on that front makes it feel right at home. From a gameplay perspective? I love me a good beat ‘em up but even I found it to be a bit too repetitive without enough changing up in your abilities as you basically start with almost everything on hand. 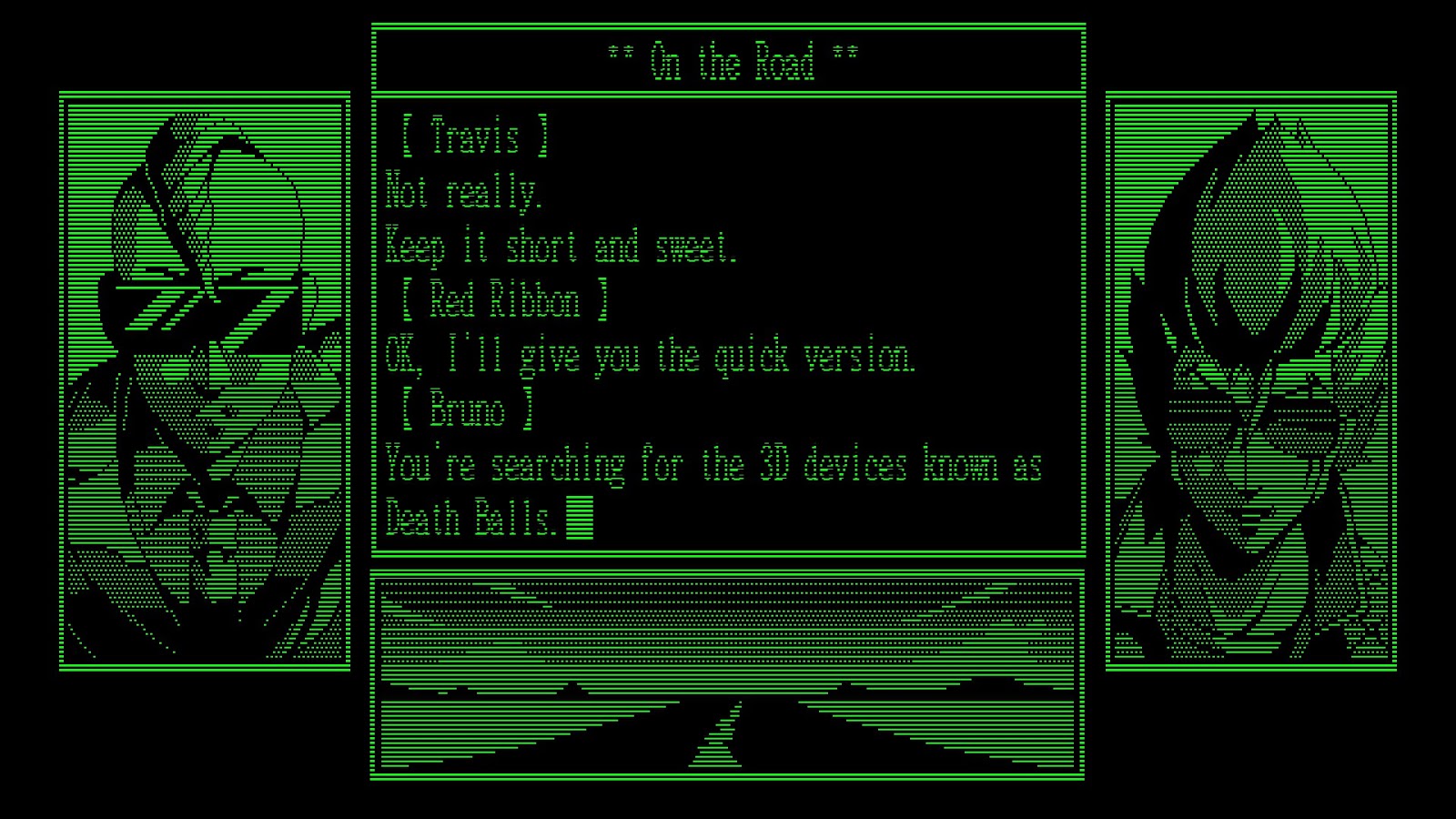 With no real segway between the tutorial and the actual gameplay, things get to the point really fast but then they just keep rinsing and repeating every time you get to fight a bunch of enemies. Either taken out with one hit or with an insane amount wondering if they’ll ever die, the most you’ll have to strategically take into consideration is recharging your beam saber which is still a thing. Now instead of shaking a wii mote up and down rather suggestively, you click on the left thumbstick and then wiggle the right one left and right. It doesn’t take long to get the energy flowing again, kind of suggestive but hey, it’s part of the charm, and getting right back to chopping down your enemies.

Unlike your normal enemies though, boss fights are for lack of a better term “legit”. They are fun, they have phases, and they feel more like No More Heroes than the standard gameplay does. This makes what is almost trudging through certain “games” at times more than worth it as you are treated to an epic fight, and to some dialog after all of the hacking and slashing that you’ve been doing with no one to really talk to save a random grandfather ghost and the ramen seller that will heal you up if you ask him for a bowl. Itadakimasu! 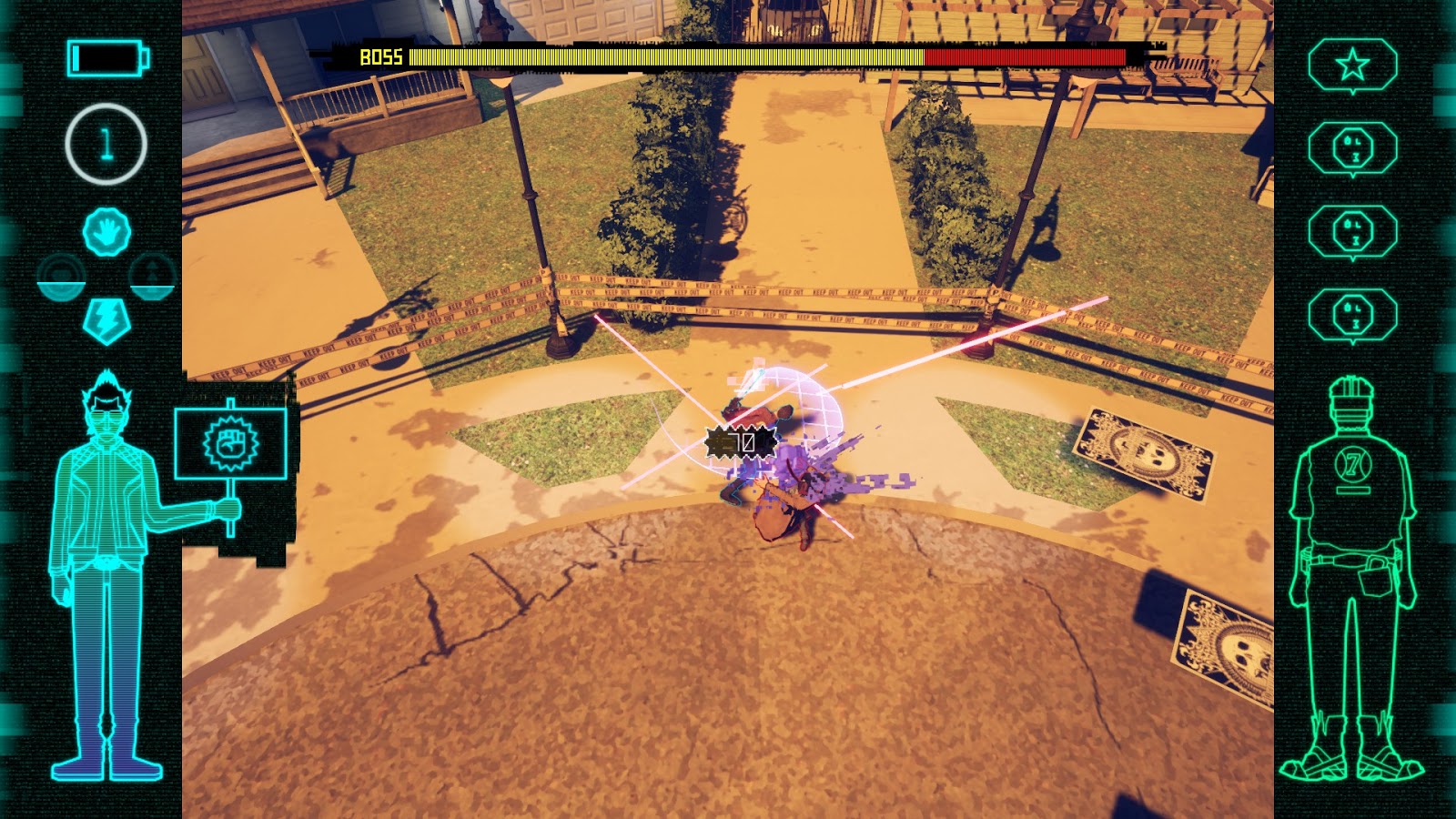 This is only half of the experience though. The other half has both Travis and Badman kicking around the trailer before Travis heads out in order to find the rest of the Death Balls. Not to be confused with the Seven Dragon Balls, the SIX Death Balls can grant any wish point finale. It’s not based off of the Dragon’s limitations. But wasn’t Badman trying to kill Travis you ask? Yes he was! BUT, already having one the Death Balls the two sort of start working together because what’s better than playing alone? Coop! So while you can choose your character for Single Player, in Coop one player will have Travis while the other will have Badman.

As it stands to be par for the course as the No More Heroes series is quite over the top, the WHOLE experience is a melding pot of styles and presentations that make you wonder exactly what the dev team were on when they made this. Gameplay while always behaving the same will adjust points of view and depth of field, the way in which characters talk and interact will change whether in the Death Drive Mk II or exploring the world for more Death Balls in an almost Metal Gear Solid presentation meets a text based adventure like Zork. It’s random as hell and at times I just had to smile and chuckle as the ridiculousness of it all.

Finally, other than diving through a video game to actually get your hands on the Death Balls and text based adventuring the world to find the items to slap into the Death Mark to get the Death Balls, you can kick around your trailer as Travis while Badman sits there and doesn’t do a whole hell of a lot. Archives allow you to look up on stuff, your computer and access to the internet allows you to buy stuff like T-Shirts in which I totally ran around with a Salt and Sanctuary one while giving Badman an Enter the Gungeon T-Shirt. 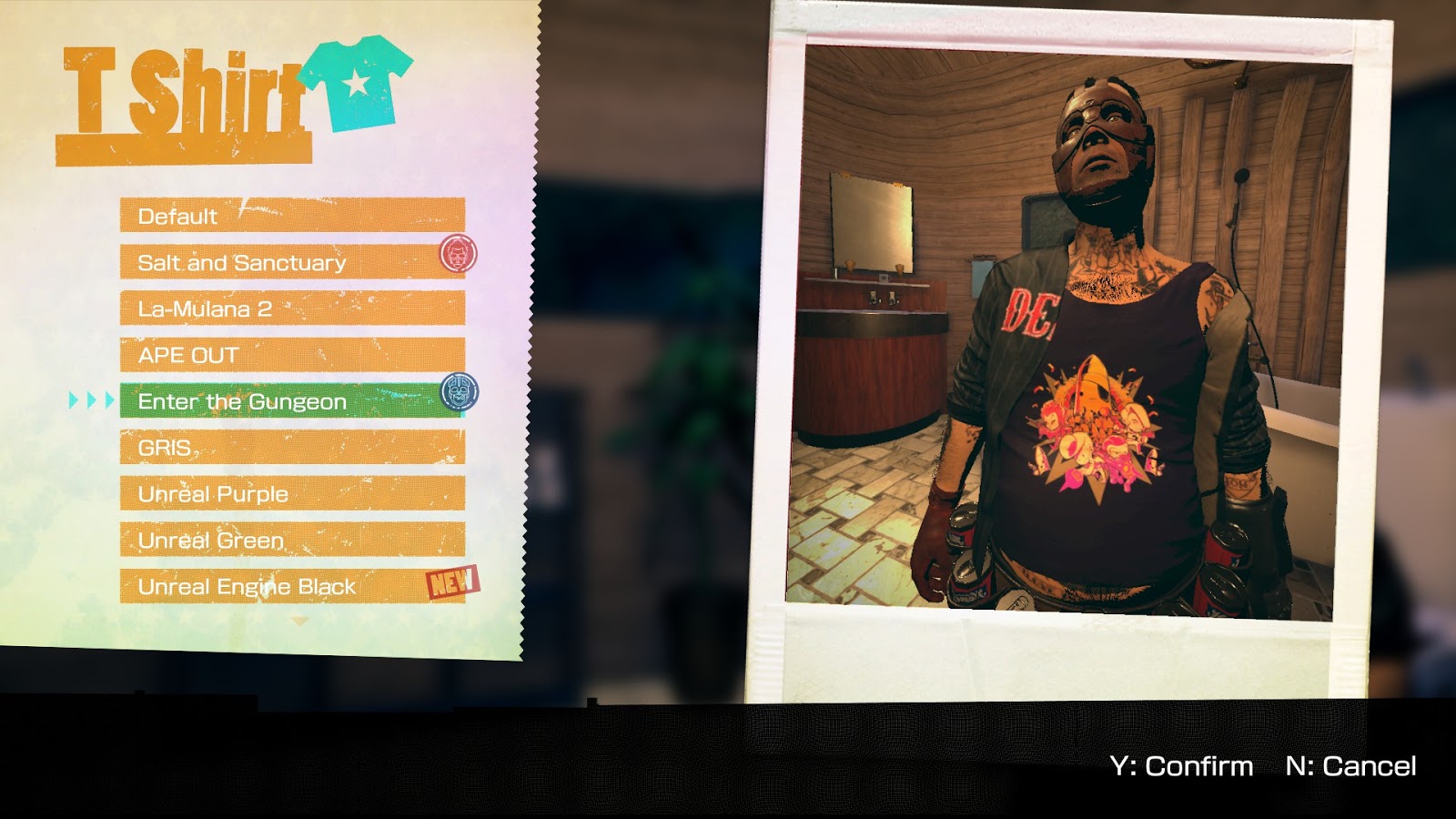 While different than the previous two No More Heroes, Travis Strikes Back is a decent 2.5 entry that is basically preparing the way for No More Heroes 3. With each game to uncover a Death Ball in the Death Drive MK II being different, there are at least multiple different visuals to be had even if the core gameplay doesn’t change that much from what you are taught in the very beginning.