You are reading
Conception Plus: Maidens of the Twelve Stars – PS4 Review

A remake of the original Conception game, Conception Plus: Maidens of the Twelve Stars has an admittedly odd premise, but a rather interesting sense of humor to go with it. Beyond that, fans of the JRPG genre should feel right at home with its somewhat by-the-numbers gameplay mechanics, which are still well-executed and provide plenty to do. It is all wrapped up in a nice trope-filled, anime inspired package that works well more often than not.

We follow Itsuki Yuge as our protagonist, who quickly finds himself summoned to the world of Granvania. The world is being overrun with impurities, setting up a magical, fantastical world for Itsuki to work his way through once he is deemed to be “God’s Gift”. From there, Itsuki meets titular twelve Star Maidens, who will help Itsuki through their Star Children that they conceive with him.

It is a lot of pretty crazy, trope-filled anime stuff that has a surprising amount of voice acting. Better yet, it is pretty good voice acting the majority of the time, which helps as this narrative goes in some pretty zany directions. If the plot was taking itself really seriously, it might be a bit too much honestly. Itsuki creates a bond with the maidens (lending a bit of a dating sim vibe to the proceedings, but with no sex – these are just magical offspring. ‘Just add water’?). You then take your little ankle biters with you into dungeons, making as much use out of them as you can before they max out their potential. At that point, you do what any good parent would, and ditch them for the resources they provide and then replace them with better offspring. 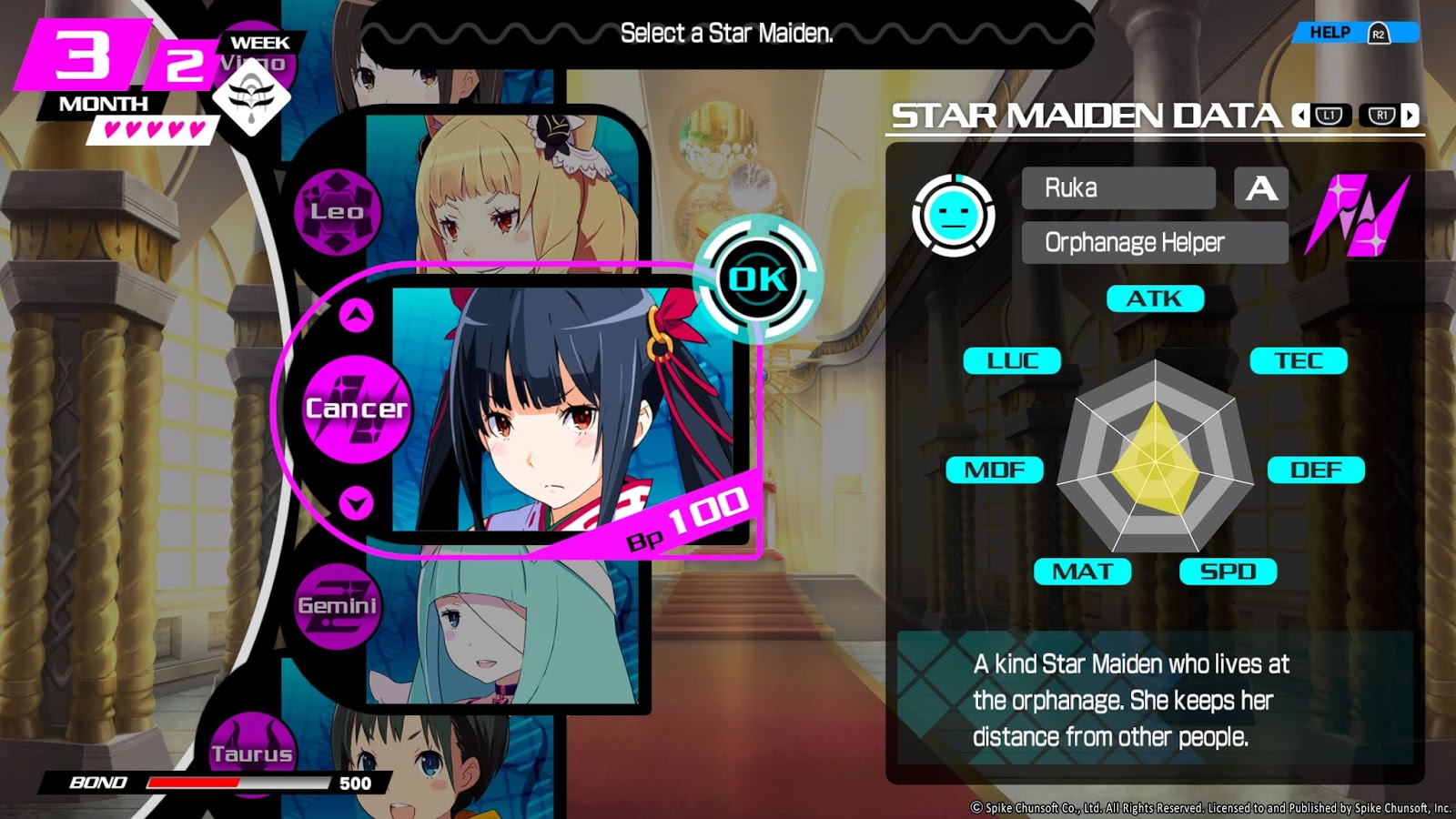 I mean, if you take this all seriously, you have the makings of a pretty morbid story. But instead of a Greek tragedy, Spike Chunsoft manages to play these events for laughs in a ‘because anime’ kind of way that really should not work as well as it does. There is a goofiness to all of this that is assisted by the voice acting and the willingness to poke fun at itself. There is a lot of text in the beginning, with a lot of explaining that manages to stop just before getting a bit too long winded.  I will not go so far as to say that this is a visual novel, but there is a lot of dialog here and my time talking to the Maidens was generally pretty enjoyable. They fall into pretty common anime stereotypes much of the time, but the writing is good enough to keep the characters interesting.

Obviously there is some focus on deepening bonds with the Maidens, but the bulk of the gameplay is spent traversing a series of generated dungeons. Procedurally generated dungeons work about as well as can be expected here. The good news is they have some variety to them, and you never quite know what is coming. However, because these environments are randomized in nature, there are seldom any truly interesting markers or objects of note along the way. They are built to be beaten, not to help give the world a little more texture. 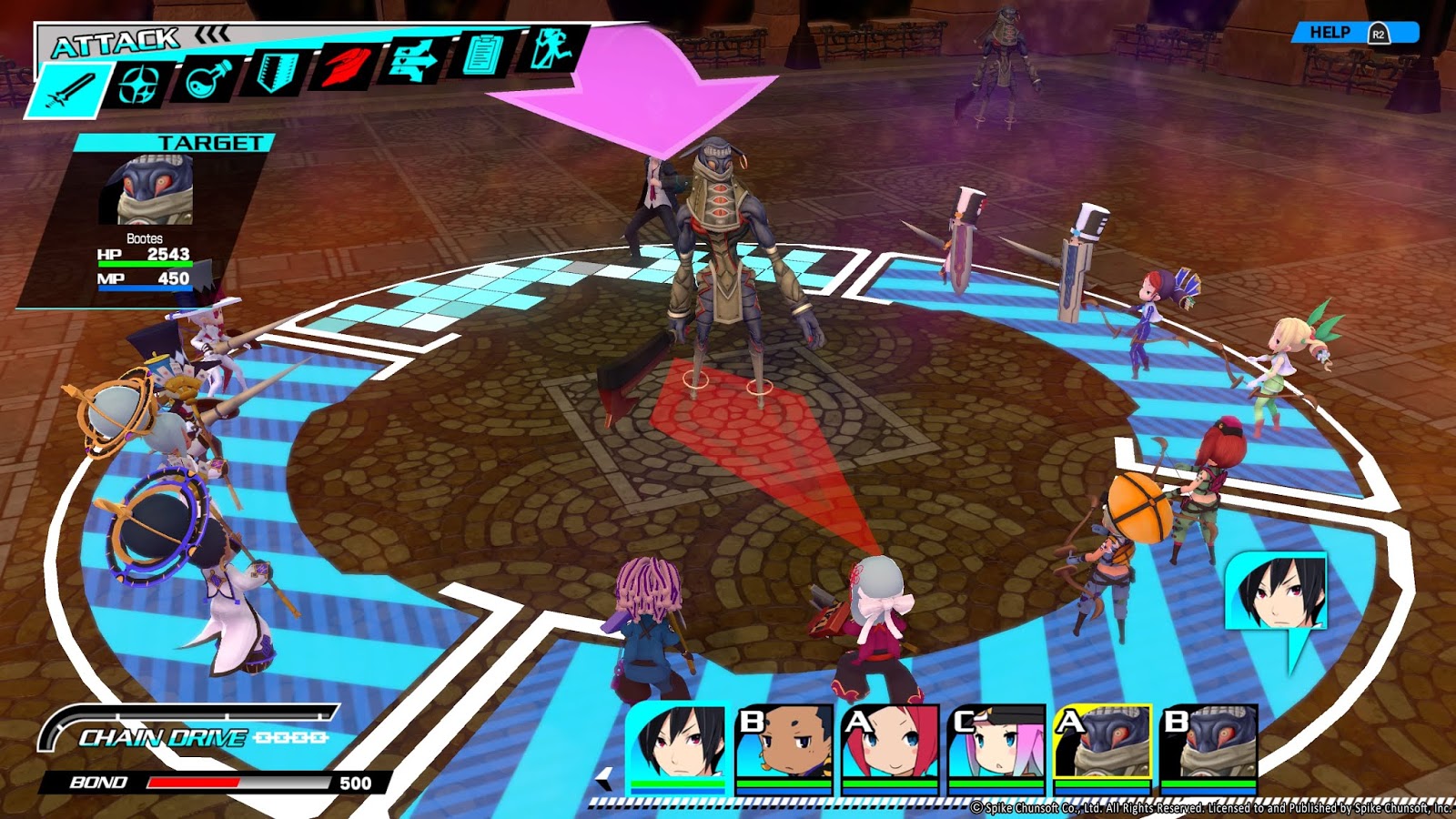 As mentioned above, your children become part of the party. You need to figure out how to build cohesive units that almost serve as loadouts that you can alter depending on the type of challenges you are going to face in a particular dungeon. What follows is a pretty standard, turn-based and position-based JRPG with a heavy reliance on taking advantage of enemy weaknesses. Between this style of gameplay and the lightweight dating sim mechanics, there are some parallels to the Persona series, though not quite as polished as those titles. The core combat is solid, if nothing revolutionary. I do wish there was a broader variety of enemies, which start to fall into ‘groups’ as I played, despite their limited different appearances. That being said, the relative lack of diversity does not mean that Conception Plus: Maidens of the Twelve Stars is easy. There are definitely difficulty spikes to be had here, and the enemy is pretty good at pouncing on poor decisions.

Visually, there is a bright, colorful anime style that works well and certainly is an upgrade over the original PSP game. Conception Plus: Maidens of the Twelve Stars is by no means a visual powerhouse, but the Maidens are attractive and the environments generally more interesting than not. Despite the lack of variety in the enemy designs, at least the ones that are provided look sharp for the most part. I did have a few weird camera issues in some of the dungeons, but they were usually fleeting and just mildly annoying when the occurred – certainly not a deal breaker. 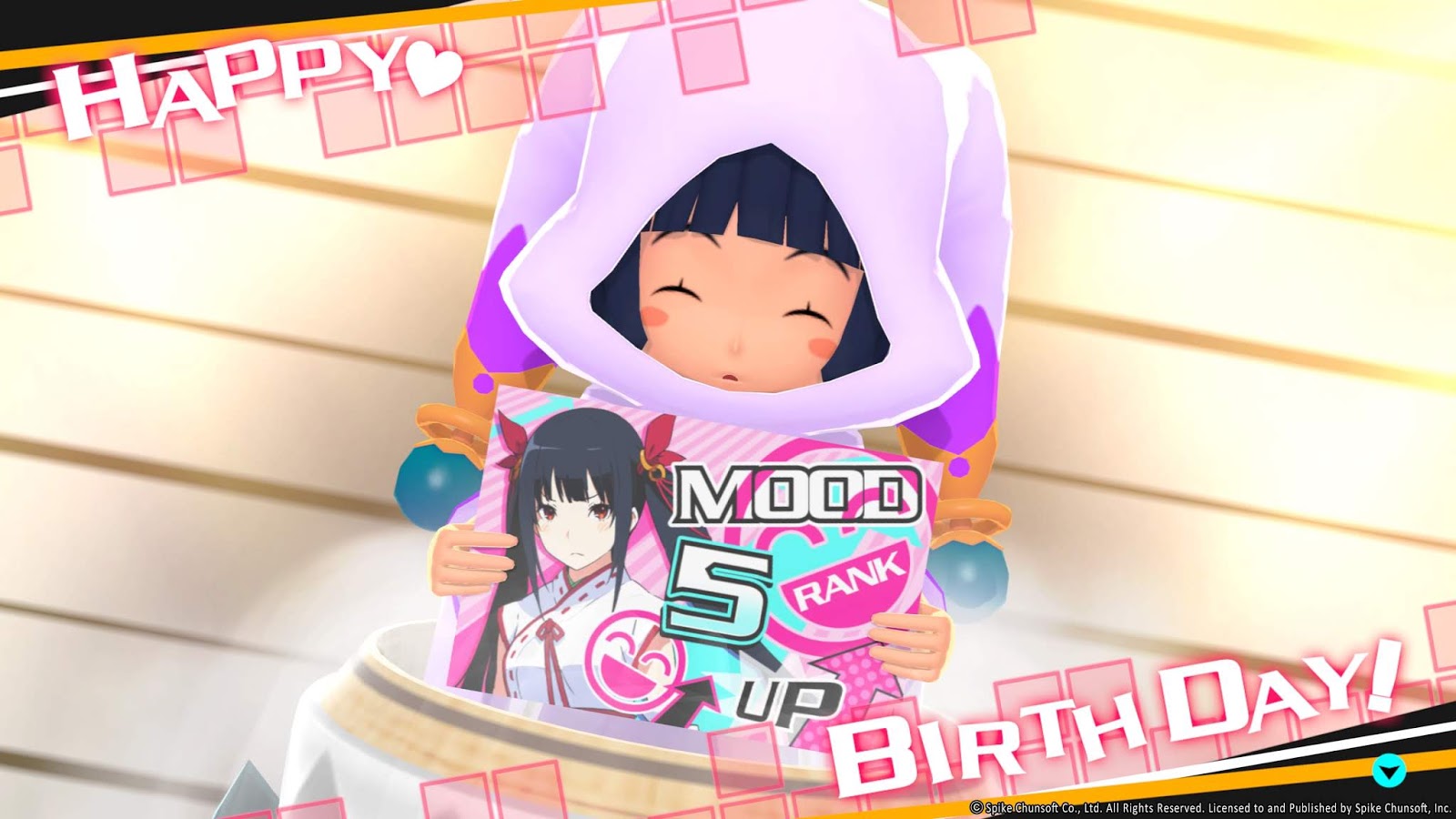 Conception Plus: Maidens of the Twelve Stars does a nice job of providing some self-aware humor and taking a potentially absurd topic and making it interesting and enjoyable. This is a nice update to a game that released on PSP and probably did not get much love at the time, but fans of the JRPG genre should be right at home with. There is really nothing all that new mechanically from the dating sim aspects or the combat, but its all put together in a nice package that is entertaining to play.