You are reading
Mario & Sonic at the Olympic Games: Tokyo 2020 – Switch Review

With a decent variety of games and plenty of Sonic and Mario charm to carry the proceedings, Mario & Sonic at the Olympic Games: Tokyo 2020 is an enjoyable collection of mini-games. It really does not do anything surprising or new, but the amusing story and different games entertain all the same.

Things kick off in quirky fashion as we see Bowser and Robotnik plotting against Mario, Sonic and their friends. As Luigi is prone to doing, he messes up and sucks a handful of people into a rigged video game device that essentially transports several of the crew – including Bowser and Robotnik – into the past. They find themselves in a video game version of the 1964 Tokyo Olympics. They have to compete against one another and win in order to free themselves from the trap video game.

The story is goofy but charming, and when I saw the characters revert to their 2D / 8 and 16-bit versions of themselves graphically, I have to admit it tickled my funny bone. That being said, it is a little weird that Mario’s using the 8-bit visuals and Sonic is sporting 16-bit, creating a visual mishmash, but at the same time? It worked pretty well overall. The entire thing is ridiculous and over-the-top, but entertaining in all of the right ways. There are a variety of events – many of them based on running (100M, Marathon, Hurdles, etc) – but there are a few other ones like Judo and Volleyball in there as well. A lot of these games are meant to look a bit throwback in nature, but they play and feel that way too. Generally they boil down to pressing buttons rapidly and in alternation, though there is some gameplay variety in some of the events. 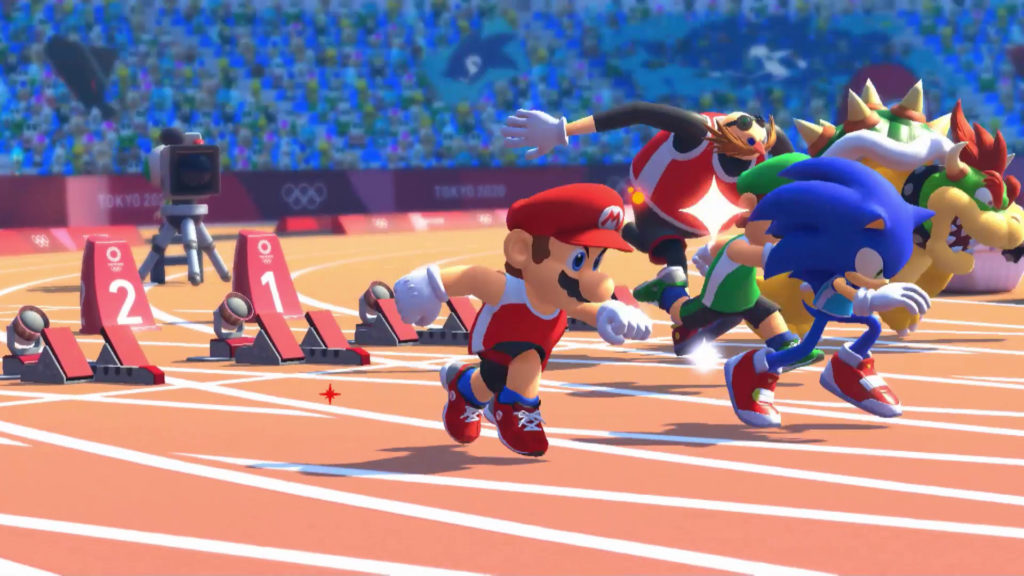 The story is taking place in parallel with characters from current times as well. While Sonic, Bowser and some of the gang are trapped in the game, Luigi and others are still in the real world in current times. However, Luigi has the attention span of a goldfish and is frequently distracted from trying to find a way to get his brother and friends out of the rigged video game and participating in his own events with other characters from the two franchises. The Tokyo 2020 games have some of the same events from the 1964 – again, usually things like running and jumping events. However, there are many other events that I found more enjoyable that brought some variety to the proceedings, such as boxing, skateboarding, fencing, table tennis and more.

There are a trio of what they call ‘Dream Events’ based around racing, shooting and karate. These have a more party / Mario Kart feel to them. Local play multiplayer is really where Mario & Sonic at the Olympic Games: Tokyo 2020 works best. These types of brief games ooze quick in and out (ably assisted by having snappy loading times) gameplay. You can also jump into online games, picking the events you want to participate in, but I definitely had more fun with the in-person trash talk that comes with local couch play (my son and I can be pretty competitive).

In terms of the package itself, visual and audio all look and sound the part with bright, colorful graphics and familiar sound effects. I really prefer using a pro controller – it just feels more comfortable than the default switch controllers, especially when I am trying to rapidly tap a particular button or two. It just feels better in my hands and the motion controls feel a bit on the sloppy side, which does nothing to encourage me to use them. 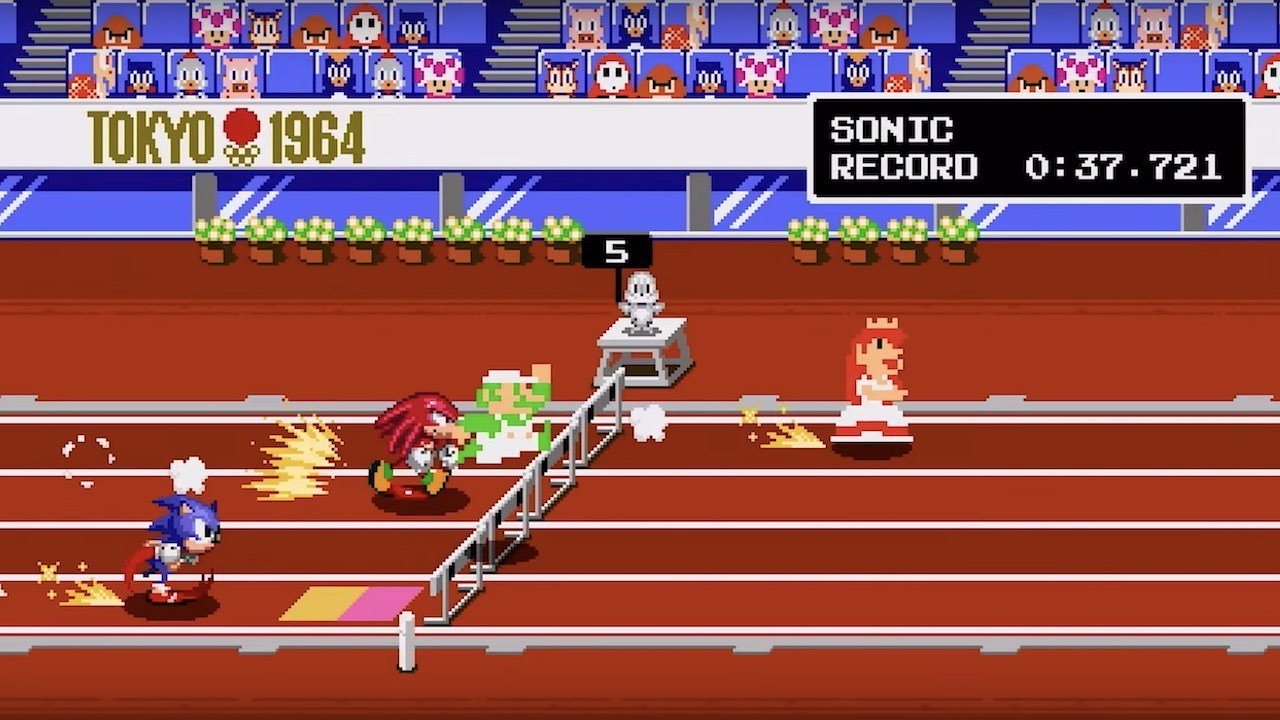 There is not a ton of deep gameplay here, it is more about variety than depth. Some characters have advantages that play out differently in different events (it is not a statistical breakdown, so much as an at-a-glance list of items that a character can do better than others). With nearly three dozen events, and a story mode that can take about six hours to complete, there is not a lack of content in Mario & Sonic at the Olympic Games: Tokyo 2020. However, as a single player experience, I find it unlikely I will hone my skills or play more than a few events repeatedly. Mashing a button to run faster is not as interesting as a karate tournament where you have enough variety in how characters interact with one another, though it is obviously not as robust as a proper fighting game either.

I do wish there had been a sort of ‘party mode’ where you could string together multiple events, especially for local multiplayer, similar to other mini-game heavy titles. I admit that I do not know exactly what it would look like, it just seems like there could have been ‘something more’. 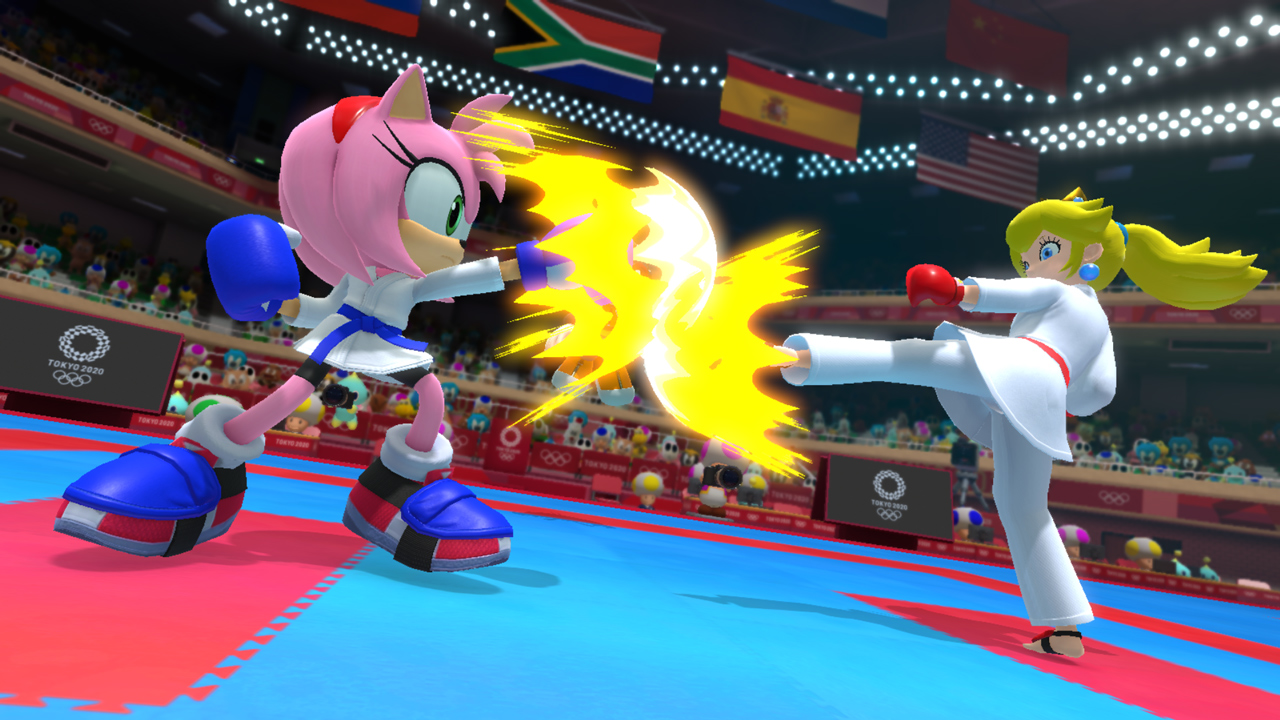 Mario & Sonic at the Olympic Games: Tokyo 2020 is a pretty great collection of games and characters, all themed around two of the most popular mascots in video game history. I have always appreciated that two long-term rivals can come together for Olympics themed games, and that mishmash works well here yet again. It is a fun distraction and a great reason to have some friends over to share in the fun, though the single player experience kind of dries up once the story mode has been beaten.