You are reading
Owlcat Games Announces Pathfinder: Wrath of the Righteous!

Moscow, Russia,  December 5, 2019 — Developer Owlcat Games is proud to announce Pathfinder: Wrath of the Righteous, a classic isometric CRPG game. Based on the adventure path of the same name, it follows in the footsteps of the previous digital adaptation of Paizo’s legendary tabletop RPG, Pathfinder. The first key art image of the game has been released as a teaser of things to come for the title.

While not a direct sequel to Pathfinder: Kingmaker, Pathfinder: Wrath of the Righteous will expand and elaborate on the core elements that made Owlcat’s previous installment successful. New features include the mythic progression system, a new corner of the award-winning Age of Lost Omens setting to explore, and more classes and character customizations drawn from Pathfinder’s extensive history. Owlcat will be releasing more details as development progresses so that fans can stay caught up on how the process evolves over time.

“We are tremendously excited to announce Pathfinder: Wrath of the Righteous today. With our new game, we are taking everything that made Kingmaker enjoyable and building on top of it. We laid a solid foundation and are going to push the boundaries of the CRPG genre with our next title,” says Oleg Shpilchevskiy, Head of Owlcat Games studio. “We especially want to thank the Kingmaker community for their support because we would not be making this game if it weren’t for them. When Wrath of the Righteous is ready, we cannot wait to see them answer the call again.”

Pathfinder: Wrath of the Righteous is based on the Wrath of the Righteous Adventure Path from the tabletop game but includes new characters, plots, and elements to entertain even players already familiar with the adventure. It tells the story of a large-scale conflict between mortals and demons where players are invited to immerse themselves in a world under siege from demonic forces. As a vicious invasion threatens the world, the consequences of one’s decisions will forge a unique narrative of their personal battle between good and evil. 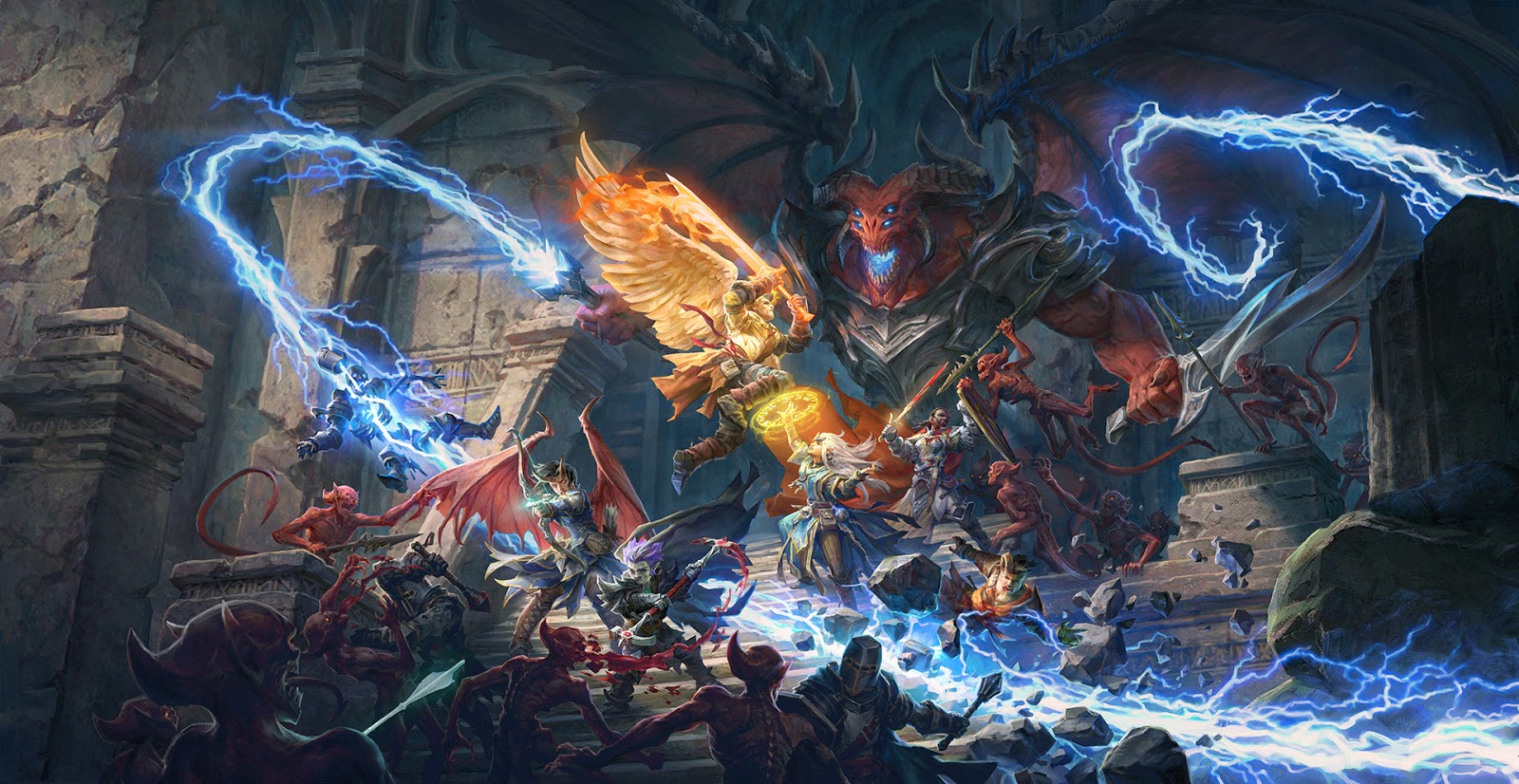 Kingmaker’s Creative Director Alexander Mishulin and Lead Writer Alexander Komzolov return to their respective roles, and Owlcat is happy to confirm that Chris Avellone is back on board lending a hand and supporting the narrative team as he did with Pathfinder: Kingmaker.

To stand against the demonic invasion, the player character and their companions will receive additional powers from the player’s chosen mythic path. These paths vary widely in nature and profoundly impact the storyline of the game, permanently changing the characters and the world around them. Players may choose the path of the  immortal lich, wielding powerful spells and commanding an army of undead; the path of the trickster, causing mischief and finding fun even in the middle of the demon-filled abyss; the path of the angel, summoning celestial allies into battle and meting bolts of divine judgment upon foes; or something else entirely.

Some Pathfinder RPG character classes that didn’t make it into Kingmaker will make their CRPG debut in Wrath of the Righteous alongside the returning roster, including — but not limited to — the fan-favorite witch and oracle. More classes and character options will be revealed in the near future.

Boasting an improved visual style, Pathfinder: Wrath of the Righteous will offer a look and feel distinct from that of Pathfinder: Kingmaker. Set in locations including a demon-infested wasteland, besieged crusader cities, and the foul, twisted Abyss itself, Wrath of the Righteous’s art will capture the epic fight of the world’s defenders as they struggle to hold the line against the corrupting force of otherworldly entities.

Owlcat Games was founded in 2016 by a group of developers united by their love of CRPGs. The team is led by veteran game designers behind titles like Heroes of Might and Magic V, Silent Storm, Etherlords, Evil Islands: Curse of the Lost Soul and other games. Team members also took part in the development of popular MMO titles, Allods Online and Skyforge. The first project unveiled by Owlcat Games was 2018’s Pathfinder: Kingmaker, an isometric computer RPG based on the highly popular Pathfinder pen-and-paper roleplaying game by Paizo Inc. The success of Kingmaker has allowed them to continue working with Paizo on a new Pathfinder adventure, Wrath of the Righteous.

Paizo Inc. is one of the world’s leading hobby game publishers. Since 2002, millions of players have joined the goblin army by playing the Pathfinder® and Starfinder® roleplaying games across tabletops, at conventions, at their favorite local game store, and digitally on virtual tabletops. Paizo.com is an online retail hobby destination for millions of gamers that carries the latest products from top hobby game publishers. Players also find accessories, like dice and maps, miniatures, T-shirts, goblin plush toys, and the newest releases to quickly replenish those adventuring supplies for the next dungeon run.