You are reading
Age of Wonders: Planetfall – Revelations – PC Review

Note(s): Anyways, be sure to check get it on Steam and don't forget to check out Triumph Studios Twitter as well as the Planetfall Twitter! For more amazing titles published by Paradox Interactive, check out their social media in the following locations: Twitter, Twitch, YouTube, and their Official Website.

Age of Wonders never ceases to amaze me with its fantastic storytelling, new content, and necromancy/vampirism… I mean, new factions. In November, Triumph Studios released their first DLC for Age of Wonders: Planetfall – Revelations. It added tons of great features to the stellar 4x Strategy game, and it has sucked me in with its beginning plot hook, new tech, new factions, challenging creatures, and new world features. After playing through the game for several hours, I found myself so engrossed in the story, that I didn’t notice the time passing. Revelations has in depth lore, has a beautifully interwoven story, and excellent music. Triumph Studios has done well by its fans and I can’t recommend Age of Wonders with its DLC enough.

I’ve dumped a decent amount of time in Age of Wonders: Revelations so far, and I have to say that I’m pleasantly surprised by the content in this first DLC. It is very easy to get sucked right into the story of discovery, helping out different factions that you haven’t dealt with before, and analyzing the new anomalies scattered throughout the world.

Let’s talk about the world, shall we? 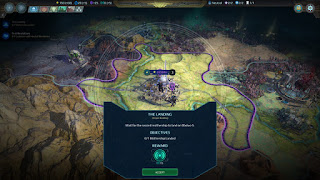 Firstly, players begin on a different planet in efforts to help a Kir’Ko friend. While hunting for these secrets that the Kir’Ko speaks about, a familiar face opens communication with you. She heads to your location but crash lands, leaving no survivors. You push forward, hoping to find out about an ancient faction known as the Es’Teq. And this is the point that I was hooked on Revelations, because Triumph Studios gave me a mystery to solve, with potential of hidden riches.

Right off the bat I noticed some new features like resource nods that would give minor boosts in research or energy. These are free for the taking so long as other factions haven’t grabbed them before you arrive at the location. Already, I found this to be a great addition to Age of Wonders: Planetfall. Often times, it can be a struggle to keep your energy up when different factions start demanding a certain amount of energy per turn. Every little bit helps, I always say.

Next on the new additions in Revelations are anomalies that players can discover and search through. When the screen pops up, players might note something in the bottom which tells them how many steps there are to completion, like 1/3. For me, this is a helpful bit of knowledge because it allows players to strategize whether they want to take the amount of turns to unveil the mystery or risk forcing through it. If a player goes through the anomaly to get the rewards at the end, then they will not have that group available to defend their territory from the wild creatures roaming around. It’s a neat concept that required me to think about my actions, especially at the beginning of the game. I tended to complete the anomalies for the additional rewards.

While playing through Revelations, I encountered some of the new creatures, and painfully got my ass kicked. I have to say that one of them is quite entertaining, if not brutal, like the MegaSow and it’s youngens. Yes. The giant pig thing is called a MegaSow and it hurts when you fight it. Trust me. I lost the battle the first time because my units didn’t have enough army value. (I mean, it was worth a shot, but I knew that there was a high chance I’d fail the encounter.) Eventually, I was able to take out the MegaSow and its Piglets but not without getting a bigger army! 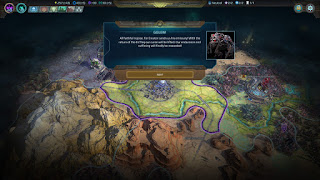 I spent a fair amount of time immersed in wonder throughout my time in Revelations because I was presented with the mystery of the Es’Teq faction. During my time, I made enemies with people that began as neutral. It ended up that they formed a defensive pact with another faction that I was not on good terms with. The only person that is currently friendly with me is none other than Jack Gelder – the Syndicate member you play in the base game. Well played game. Well played. I guess I understand his motivations better than the other factions? I don’t know. Maybe I took on too much. Regardless, I’ve been having a great time playing through Revelations.

With the new content added, combined with the features already included in the base game, Revelations is a worthwhile DLC because it adds a fair amount for a decent price point. And, not only is there more than ten hours worth of gameplay added, but  there are new mechanics, factions, and technology to sweeten the deal. I may be still getting used to the Age of Wonders series, but I can’t help but marvel at its story, gameplay, and features. The Revelations DLC makes an already great game better in many ways – apart from the odd game crash (which hasn’t been frequent and I only ever lost one turn or two.)

To give readers and idea of the content added to the game, here is a list of things that players can experience in the Revelations DLC – some of which I mentioned above: 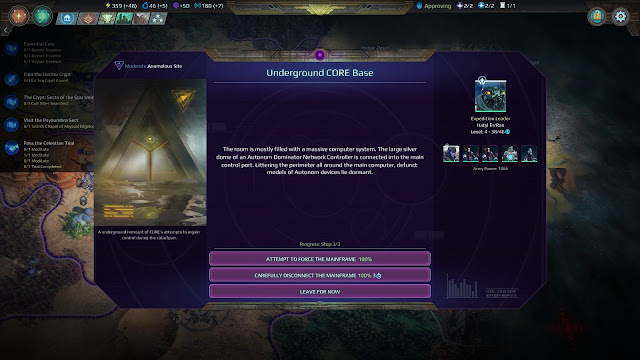 I absolutely love this game because it is in depth and adds so much more to the gameplay and strategy both on the map and in combat. Revelations adds a ton of new content with 10+ hours of story, new factions, new tech to play with, and new strategies to employ. This DLC in the Age of Wonders series has impressed me greatly, even though I had some minor hiccups during gameplay (like the game froze on me. I needed to force close the game and reopen it, but thankfully, I didn't lose more than a turn or two.) As such, it earns an 8 out of 10 because of the sheer amount of content and the fun I have playing it. Revelations makes for a must have DLC, in my opinion, because of the story, the strategy, and the impressive lore added. It is more than I expected for this DLC.