Note(s): Please follow Lion’s Shade and Cliff Empire on Social Media: Official website, YouTube, Facebook, and Steam. Trust me, while it isn’t a perfect game, players who love city builders will not be disappointed by this title!

Cliff Empire is a city builder that has a different environment that players have to work with. First of all, your entire city is built on top of cliffs. And, when you first load up the game, a small tutorial screen will pop up on the left of the screen which helps players build a successful city on the tops of oddly flat cliffs. It is a game that intrigued me right off the bat and I’m extremely glad that I have the fortune to review it, because frankly, Cliff Empire is right up there with some of my favorite city building games of all time.

At first, I actually thought that players only had access to one cliff and played it like that for a good amount of time. That is not the case with Cliff Empire, so the first unique feature about this game is that players get access build on three cliffs. Each seem to be independent of each other, meaning they have their own money pool to use, food supplies, and energy consumption. As such, players can spend their time building up or fixing one of the other cliffs while allowing time to pass for the others, since time does not change per clifftop.

The second unique feature about the game is that Cliff Empire is a little more futuristic of a city builder, a la Surviving Mars. Citizens that inhabit your cities don’t need to specialize in different types of professions, and the overall look of the game reminds me of The Jetsons’. There are drones that build the structures and the trading platform looks like a Stargate because it is sleek, polished, and shiny. Considering Cliff Empire reminded me of so many different things, my impression of the game drastically increased. 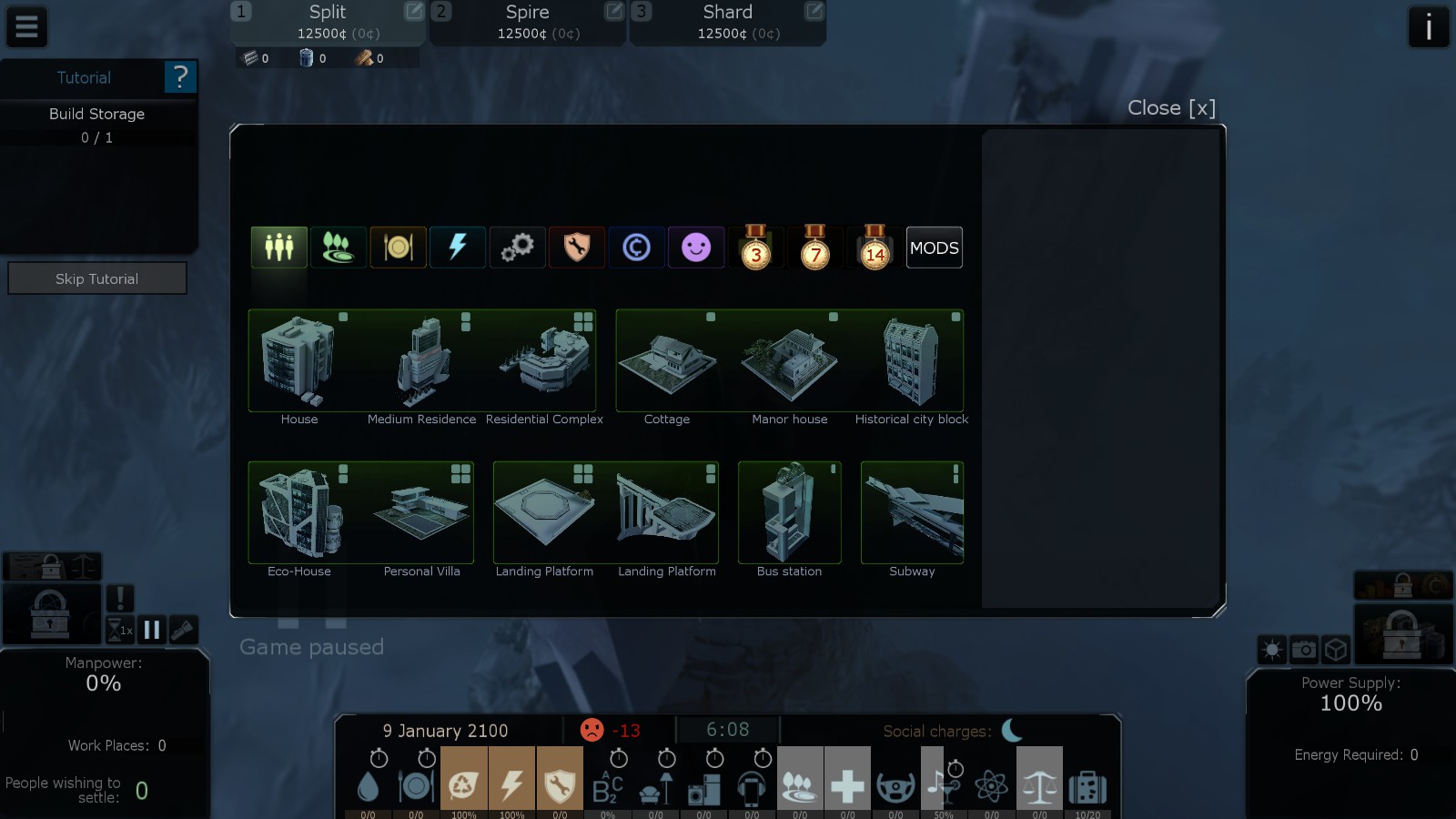 The third feature which is different from any other city builder is that when players click on a cliff, they are not bound to building a structure there. Players click anywhere on the cliff, select the building they wish, and then find a spot they wish to place the structure based on its size (which is shown in the top right hand side of each building box, as shown on the left). This is important for a number of reasons like: it’s easier to plan out a city, it reduces the chance of misplacing a building, and since there is limited space on each cliff, players are given all the information to build effectively.

There is another feature that I will cover more in the graphics and UI portion of this review, but after sinking a fair amount of hours into Cliff Empire, I can say without a doubt that I love this game immensely. With the three different independent cliffs that can be built upon, the game is designed in a such a way that players won’t easily get bored. There are points where buildings will catch on fire and players will physically see that icon to indicate such. If players happen to be looking at the cliff where the fire occurs, then an alarm will sound as well (which thankfully isn’t heard when focused on other cliffs).

Overall, because of Cliff Empire’s unique approach to the city building genre, so far, it ranks high for me.

The graphics in Cliff Empire impressed me immensely. I appreciate a developers attention to detail when it comes to city builders, particularly when zooming in to different sections of a city. Cliff Empire is quite detailed when players get up close and personal with anything in the game. If they zoom in to the bus stations or the walking paths, you can clearly see the people whom inhabit your city. And zooming into various structures like the transit between cliffs, shows realistic looking trains. After building the fishing ports, players can zoom in to see fish in the water as well as seagulls that fly around the docks. Again, Cliff Empire is a graphical marvel, and I absolutely love the game for their attention to detail.

The UI is different than most other city building games. For example, when players launch the game, they have a number of options that can be adjusted in the menus. If players prefer to invert the x and y axis, there is an option for that. The camera sensitivity, UI scale, and displaying people or drones can be altered here as well. As with most games, there is also a tab which allows players to change hotkeys. 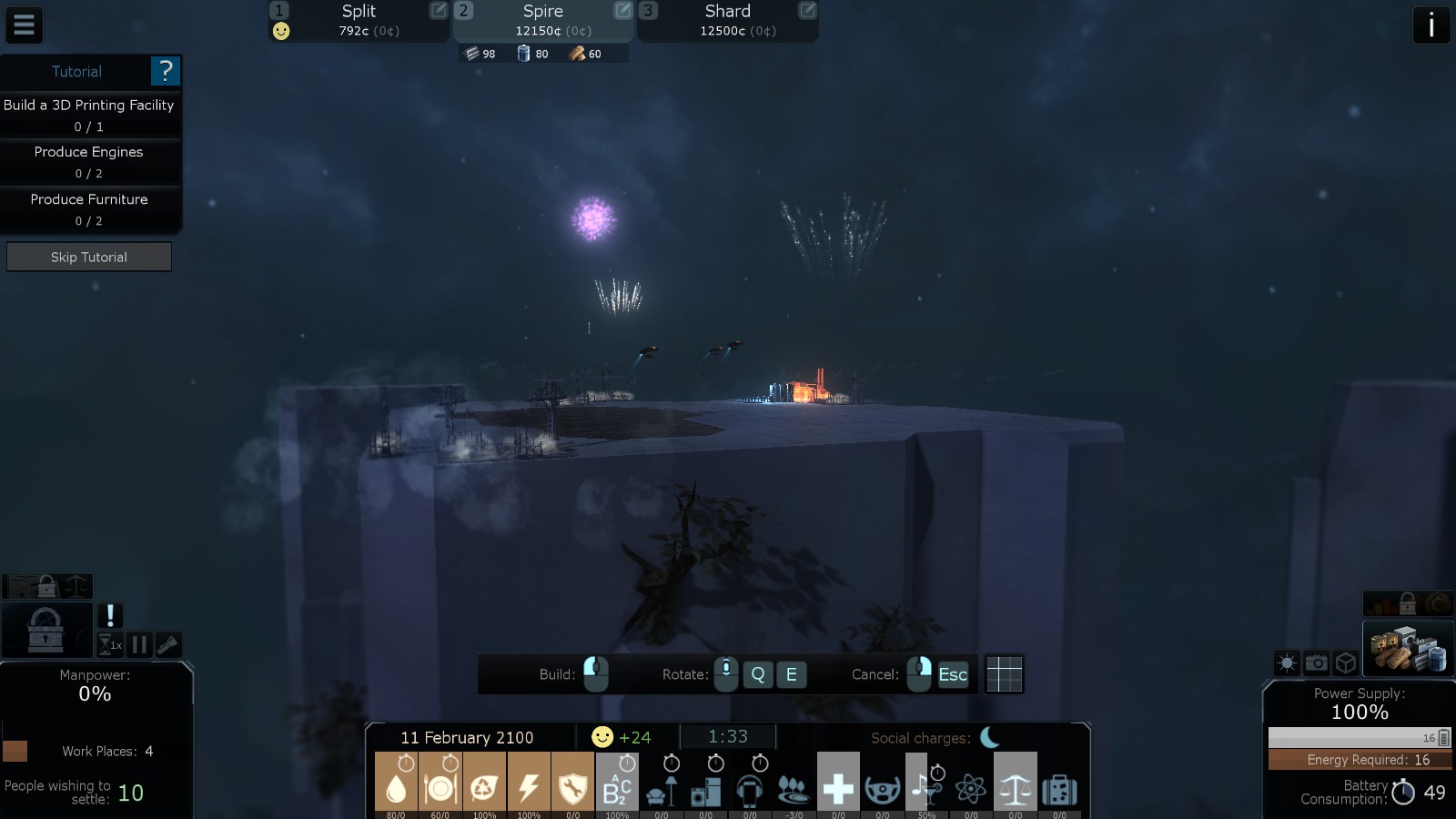 When in the sandbox game mode, players can readily see all the information they need to construct buildings that would keep their citizens happy. At the bottom of the screen are icons to show the amount of water, food, environmental friendliness, energy levels, and building maintenance percentage of the cliff that is in focus. At the start, these just look awesome, but it is evident that these images are also graphs. As players construct buildings, the levels of each icon will change. For example, when players place more buildings that add pollution to the area, the environmental friendliness will decrease. (So it won’t be orange like in the image displayed to the side. It would have a partial fill.) Once players counteract that bar with more parks and such, then the bar will change accordingly. And, when players haven’t placed any buildings that generate furniture or electronics, the icon at the bottom will remain transparent. (Like the furniture icon in the same screenshot, for example.)

On the left hand side at the bottom of your screen, information is displayed about the total population, how many citizens wish to move to your Cliff Empire, the worker demand, and a percentage showing the total manpower of your city. These graphs eliminate the need to find another screen that gives players this information. 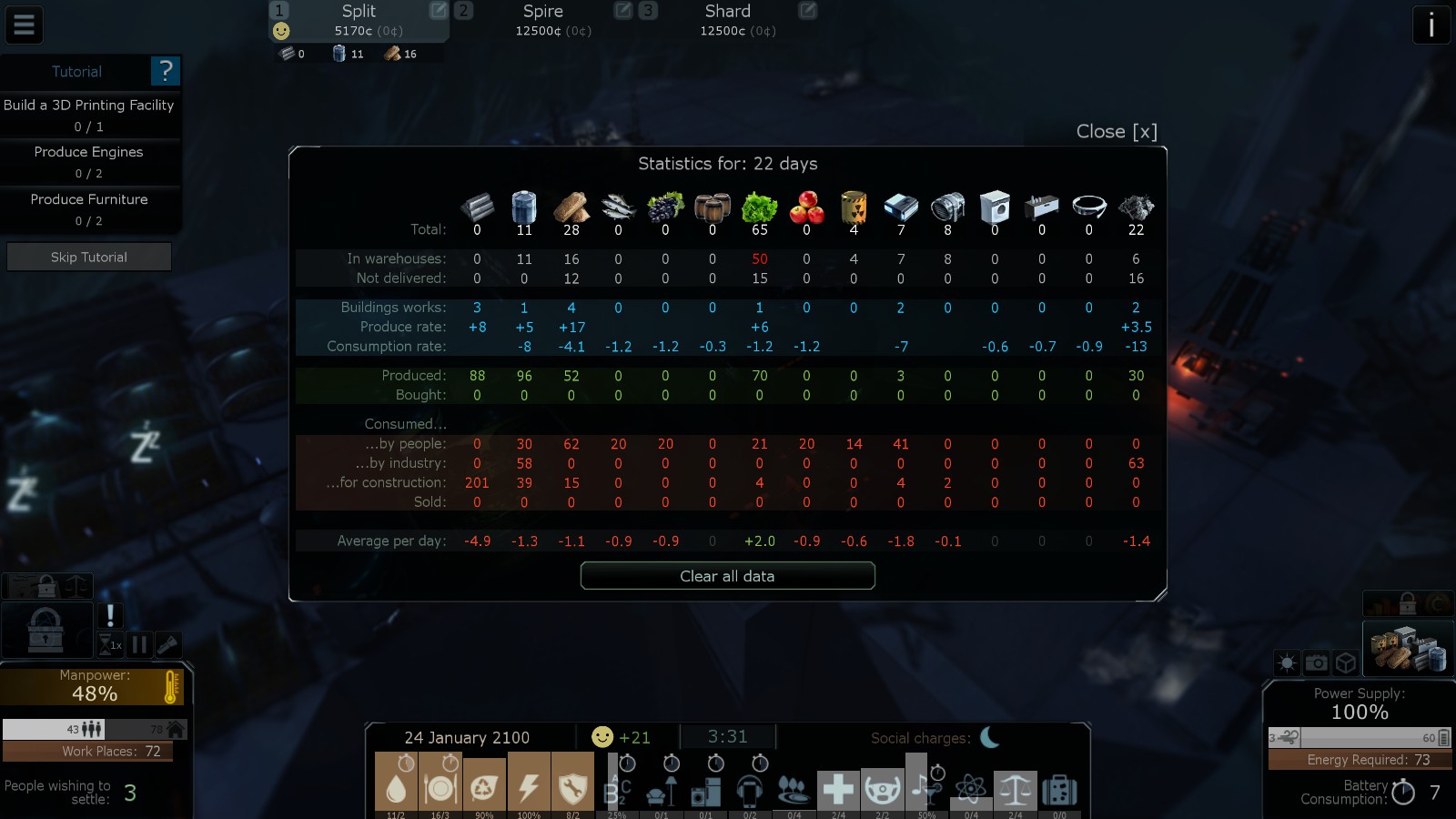 Displaying information like described above makes the UI much less clunky and it is more appealing to players. In fact, the way the whole UI is designed impressed me greatly, because most city builders have separate screens with elaborate graphs for players use. Often, I find this to be tedious in city builders (finding detailed information), but Cliff Empire has created a visual design that conveys all the most pertinent information without adding extra screens that detract from the user experience. Everything can be seen at a glance, which is a point that I adore about Cliff Empire. And it sits above any other city builder for its presentation.

In brief, I do have to mention the sound design and music in this game. It’s simply spectacular, in my opinion. While the music in Cliff Empire is not going to provoke emotions like Doom or Life is Strange or Civilization V or Halo, it has a certain appeal that works really well with the game. I found myself being sucked into the gameplay because of the sum of its elements, including the music. 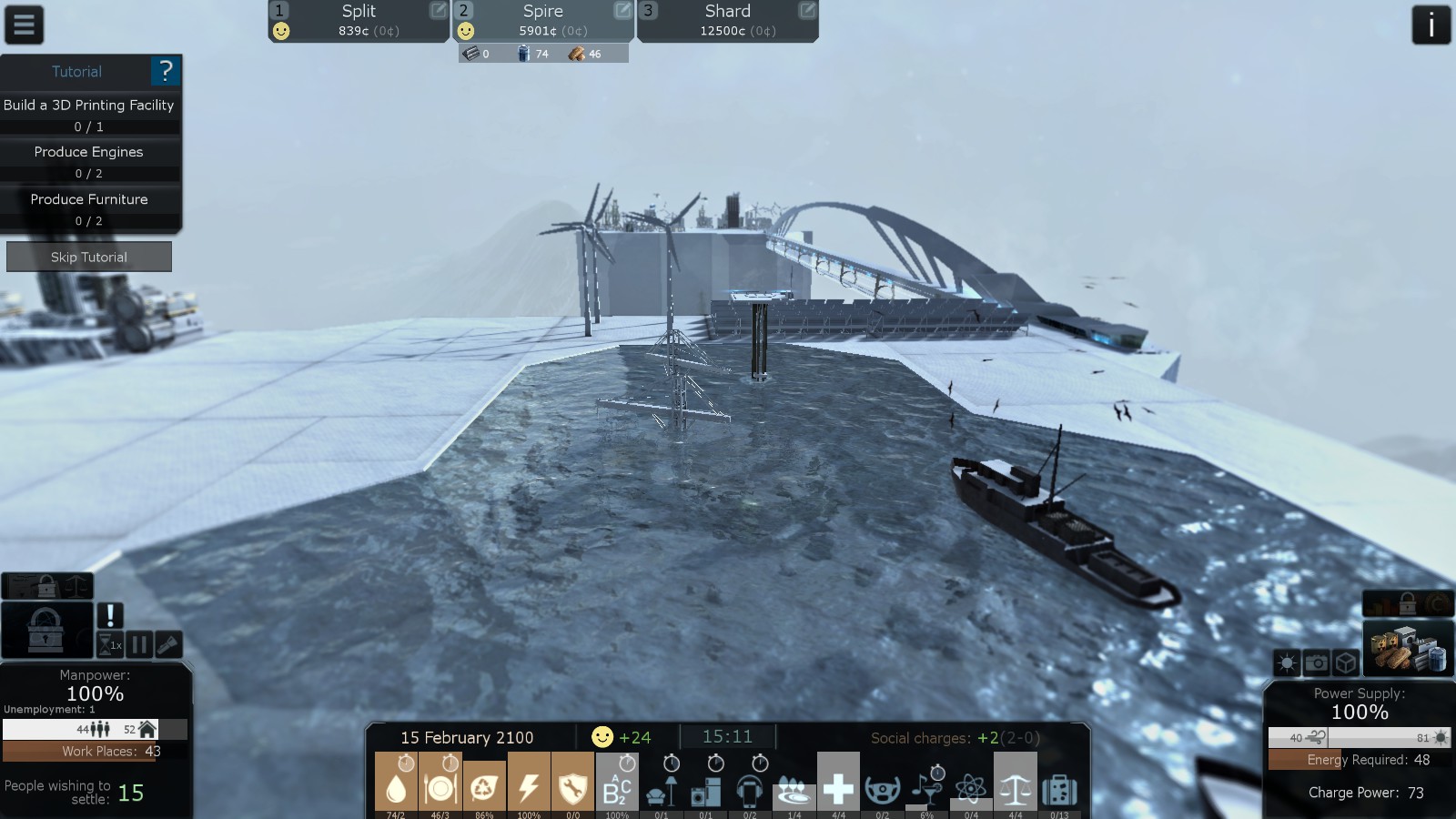 Overall, Cliff Empire impressed me as a city builder this year. As much as I covet games like Cities: Skylines, this title has created a UI that is user friendly, presented realism in a futuristic society, and has kept me going back for more. I will be playing Cliff Empire for several weeks to come, as it is beautiful in virtually every way. As a person that adores city building games, Cliff Empire is a title I highly recommend. It is clean, stable, and breathtaking. It even has the ability to be modded! (A feature I didn't test out for the purposes of this review.) I give Cliff Empire a 9 out of 10 because, in my opinion, this game has nailed the presentation, style, and feel of a futuristic city builder.

Facebook Twitter Pinterest E-mail
Previous article Western Release of Is It Wrong to Try to Pick Up Girls in a Dungeon Arrives in 2020!
Next article CGR's Games of the Decade - Platformer