While SD Gundam G Generation Cross Rays is a title I was hotly anticipating, I found the nostalgic excitement that I have for the franchise was dying down after just a few short hours.

Though it was great to relive some of the most pivotal and exciting moments in the Guman universe from the past 25 years, the painful transition from gorgeous yet repetitive animated scenes and stunning character art, to fourth-rate Flash-game quality art just wore me down. Even with some solid challenge in a handful of the missions, SD Gundam G Generation Cross Rays is not entirely sure if it is a Visual Novel, Strategy game, or poor mobile port.

This confusing blend of visual quality is discombobulating at best, downright distracting at worst. Even when I embrace fandom forgiveness, I could find very little to keep me truly attached to the latest Gundam title from Bandai Namco and Tom Create. 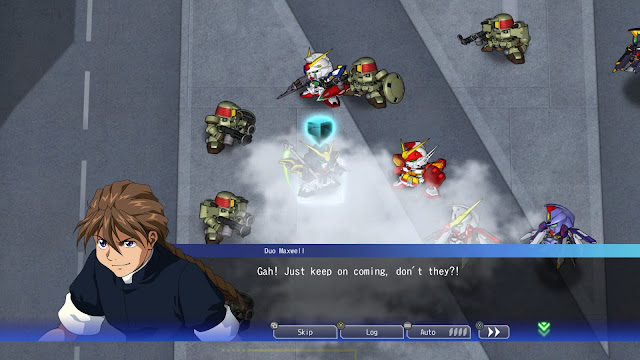 Don’t let the opening statements fool you though; Cross Rays will eventually grow on you, mutated art style and all. Where it really wins is with its power in nostalgia. With the Gundam universe being 40 years old, there is a ton of content to work with and Cross Rays is huge. Countless hours reliving battles, and conversations with old enemies and friends is quite the trip; it’s just a damn shame there is such a weird disconnect between different art styles. It honestly feels like there were four different studios, all working independently and without contact with one another, putting this game together, and it is hard to shake that feeling of uneasiness.

On a quick side note … SD Gundam G Generation Cross Rays continues the trend of “longest most confusing titles in gaming history” that we’ve seen come from the East these past few years. In its defense though, the name is a pale shadow next to other franchises or mediums, like anime, which tend to have names two and three sentences long. Lost in translation I guess.  Anyhow, imagine this, you load through to the main screen, choose your episode / stage and move in through the various character selection and customization screens (of which there are a few and this is a good thing), and you load into a very quick summarization of the series; for example, the normal 3-4 minute intro for Gundam Wing is broken down into about 45 seconds. While the writing leaves a LOT to be desired, the initial art / “cutscenes” for the intros to scenes is quite nice. Awesome drawings, excellent voice-over, and typical adrenaline pumping Gundam-rock music … then you load into the actual tactical stage.

Now tactics are extremely important and relatively challenging since ranged weapons have minimum ranges along with maximum ranges, and give some solid bonuses pending what you’re attacking, but sweet heavenly Char, the change from those gorgeous graphics to the abhorrent in-game graphics. There are these intense attack animations that you can choose to view or skip, and they look awesome, but I cannot get over the fact that the actual graphics look like they are from a 2008 mobile game. 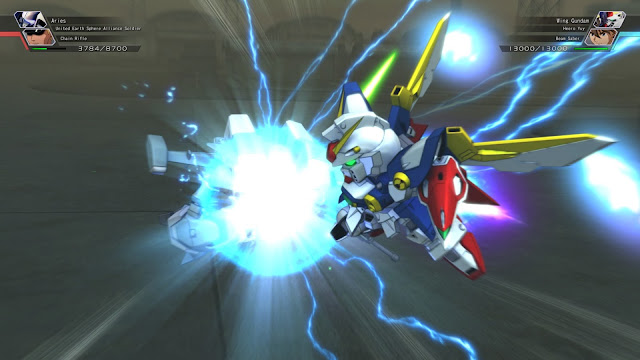 Graphics aside, you have amateur-ish dialog that fits along with any real Shonen content, which may be why it is that I am struggling with much of what Cross Rays has to offer; solid gameplay mechanics, horrific graphics, and mediocre at best story / content in an anime-inspired world. It’s entirely possible that I have just grown beyond the incredible immaturity that the Shonen material embodies and that to me, honestly, is a heartbreaking revelation.

I remember picking up a VHS box set of Mobile Suit Gundam – 0083: Stardust Memory back when it first hit Stateside (well before it was broadcast here) from a Suncoast store that was about a 35-40 minute drive from my house. I saw the pitch black box with tiny stars and a really cool robot on the front and I was instantly hooked. A few years later I eagerly sat in front of my tv awaiting the first episode of Mobile Suit Gundam Wing … I can still hear that intro and it pulls at my heartrings in all the best ways. Hell, I even recall the first Gunpla I ever bought … Wing Zero, 1/100 scale, I still have it, floating around here somewhere (mom thought it was a dumb decision to pick up back in the 90s because of how expensive it was, but I loved it!).

I think that it's moments like these that SD Gundam G Generation Cross Rays really plays upon, and plays upon them very well. Sure there are tactical aspects to your decisions, including customizing your troop gear, but where SD Gundam really grew on me … was in its ability to bring forth some of the most precious moments in my early Gundam fandom, and for that I say "well done."