comments Share
You are reading
The Dark Eye: Chains of Satinav

I remember the first time I saw images for this game – I was immediately taken by the artwork.  I knew absolutely nothing about what the type of game it would be, let alone that it is apparently based on a very popular German RPG.  Then I began to read more about the game and came to discover that The Dark Eye: Chains of Satinav is a point and click adventure game from Daedalic Entertainment. 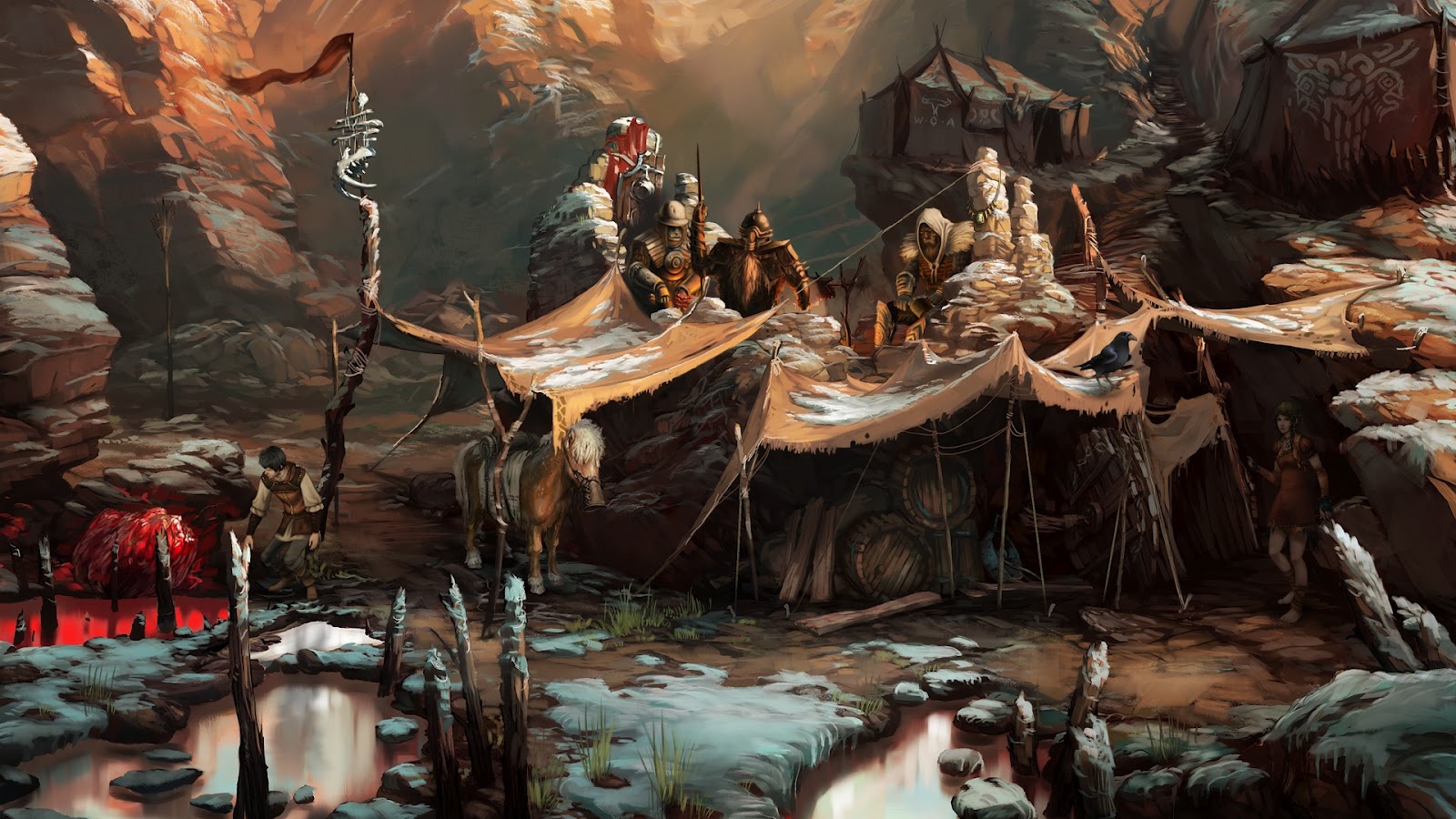 These are not a technical marvel like you might get from Skyrim, but the art style is beautiful.  I loved the vibrant colors and the detailed environments.  New locations actually feel like new locations with a hand painted look that does not recycle assets over and over again.  If only the animation had been better, this would have been a 9 or even a 10 from my standpoint, but as it stands the animation is pretty rough.  A low framerate and limited style makes conversations look a bit odd.  There are only so many expressions drawn for each character, and as their heads animate somewhat oddly, the rest of their body remains completely still.  It sort of reminds me of the critique I made about a similar affect being applied in Record of Agarest War Zero where there is some movement, but not enough to make the effect feel complete.  Still, take a look at the screenshots.  Pretty stuff that makes you really want to explore and find something new. 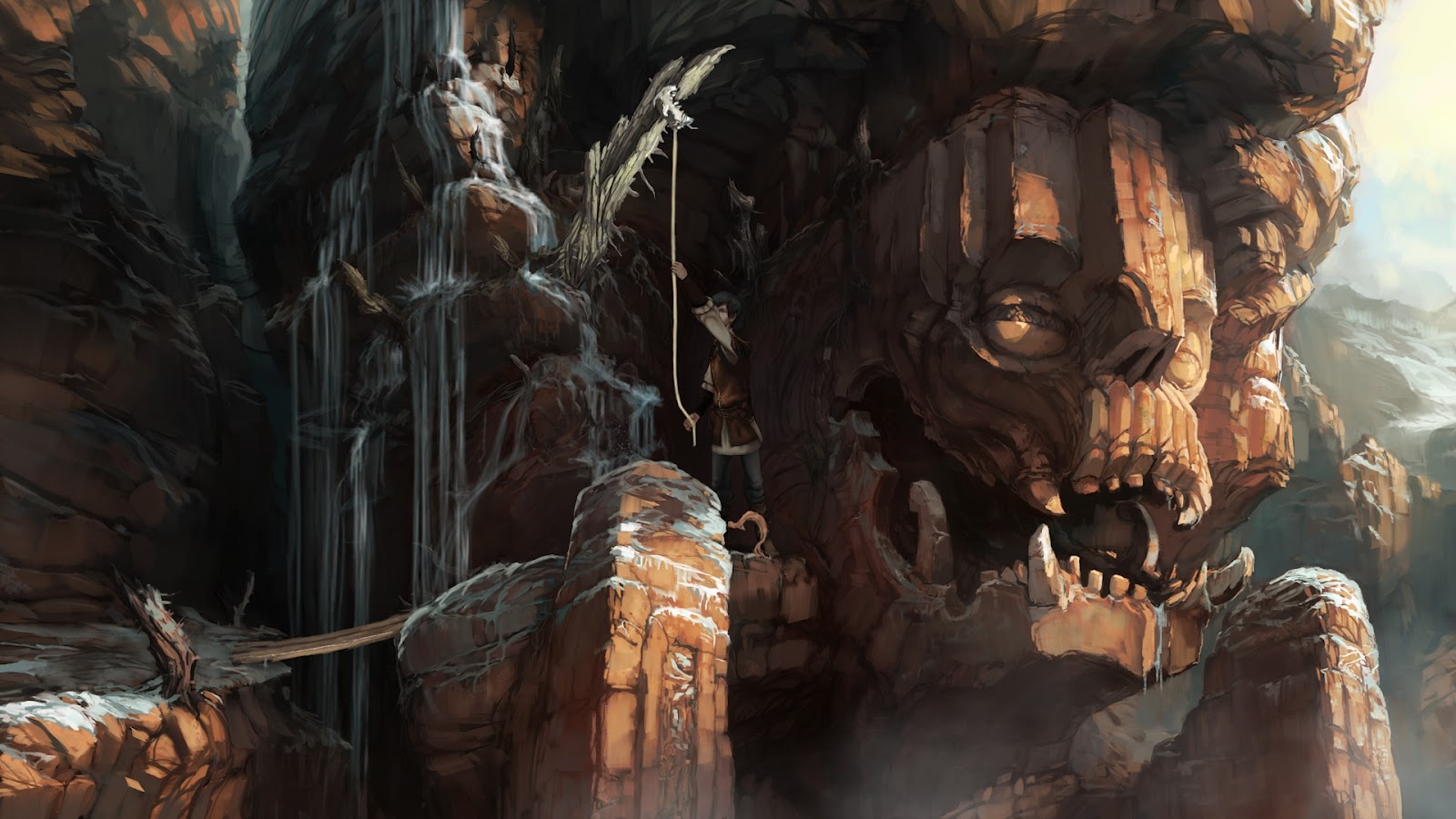 I liked the music when it played, but it did feel a bit underused.  What can I say?  I like music in my games and I actually liked the music quite a bit when I heard it in this one.  It was interesting how it reflected the tone of the story so well as the game started out fairly light-hearted, where your character’s only real concern is a royal contest.  The music was suitably toned, but as the storyline continues to take darker twists and turns, the music morphs appropriately.

There is a ton of voice acting to be had here, and the localization effort should really be complimented.  Most of the dialog is very well-written, though I wish it was acted out a bit better.  Thankfully the primary protagonists, Geron and Nuri, are pretty solid for the most part.  There were times I thought maybe Geron could have brought a bit more emotion to the table in his dialog, but overall they were good and never grating.  Some of the secondary characters hold up far worse.  They never quite annoy, but they do little to impress either. 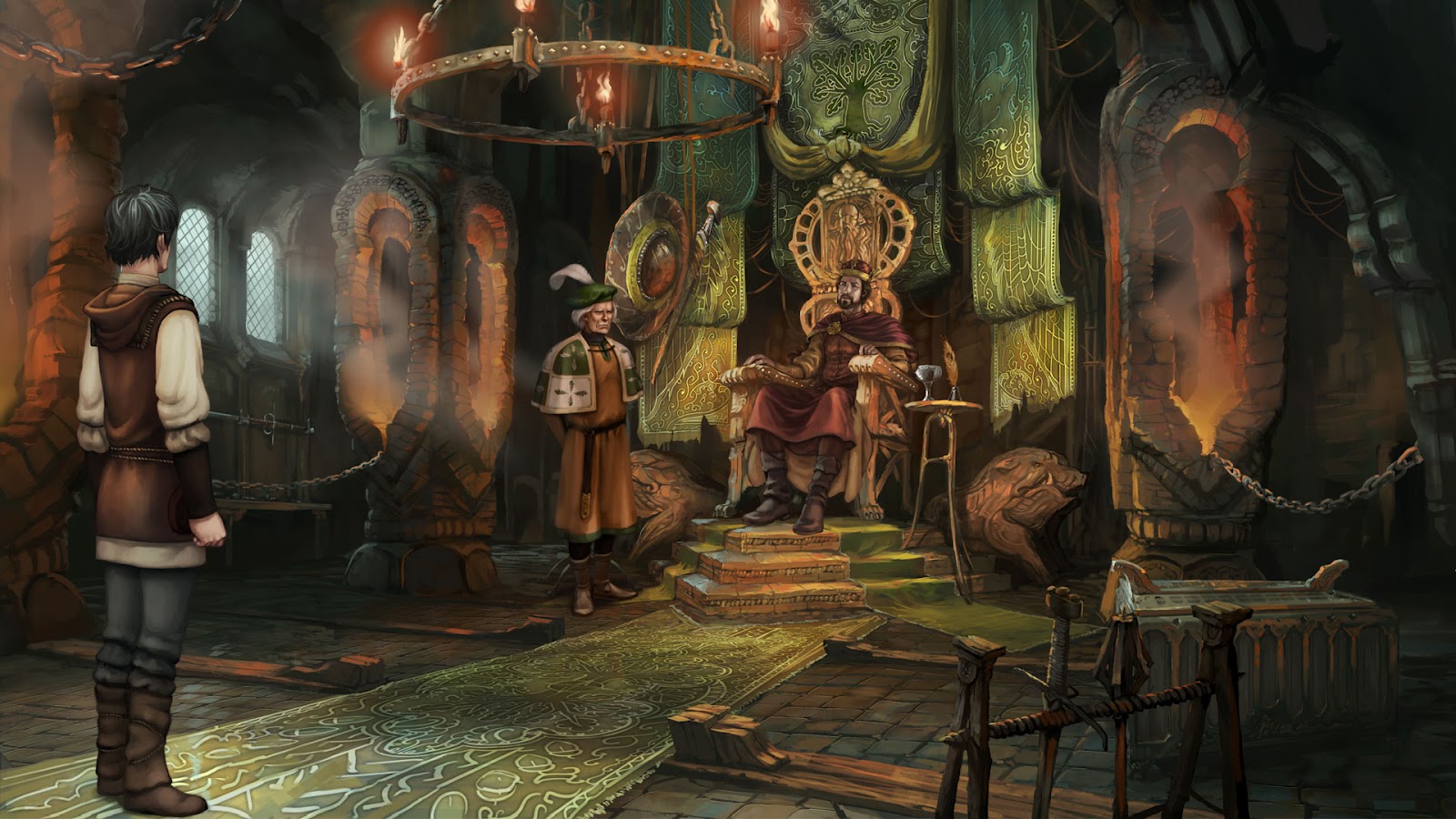 This is a click and play adventure, the kind that has been around in PC gaming forever now.  You know what you are getting, but it is well done here.  You will be clicking on almost everything along the way, with both right and left mouse buttons contributing in different ways.  One allows you to gather more information and the other enables an interaction (talking to a character, picking up an item, walking into a door, etc).

Puzzles are fair and almost never feel ‘cheap’.  It helps that there are options you can turn on that let you know what items are clickable on the screen if you hold down say, your spacebar.  There is a nice dynamic built in to the way Geron and Nuri interact with their environments as well, as the former can break fragile objects from afar while the latter can fix them. 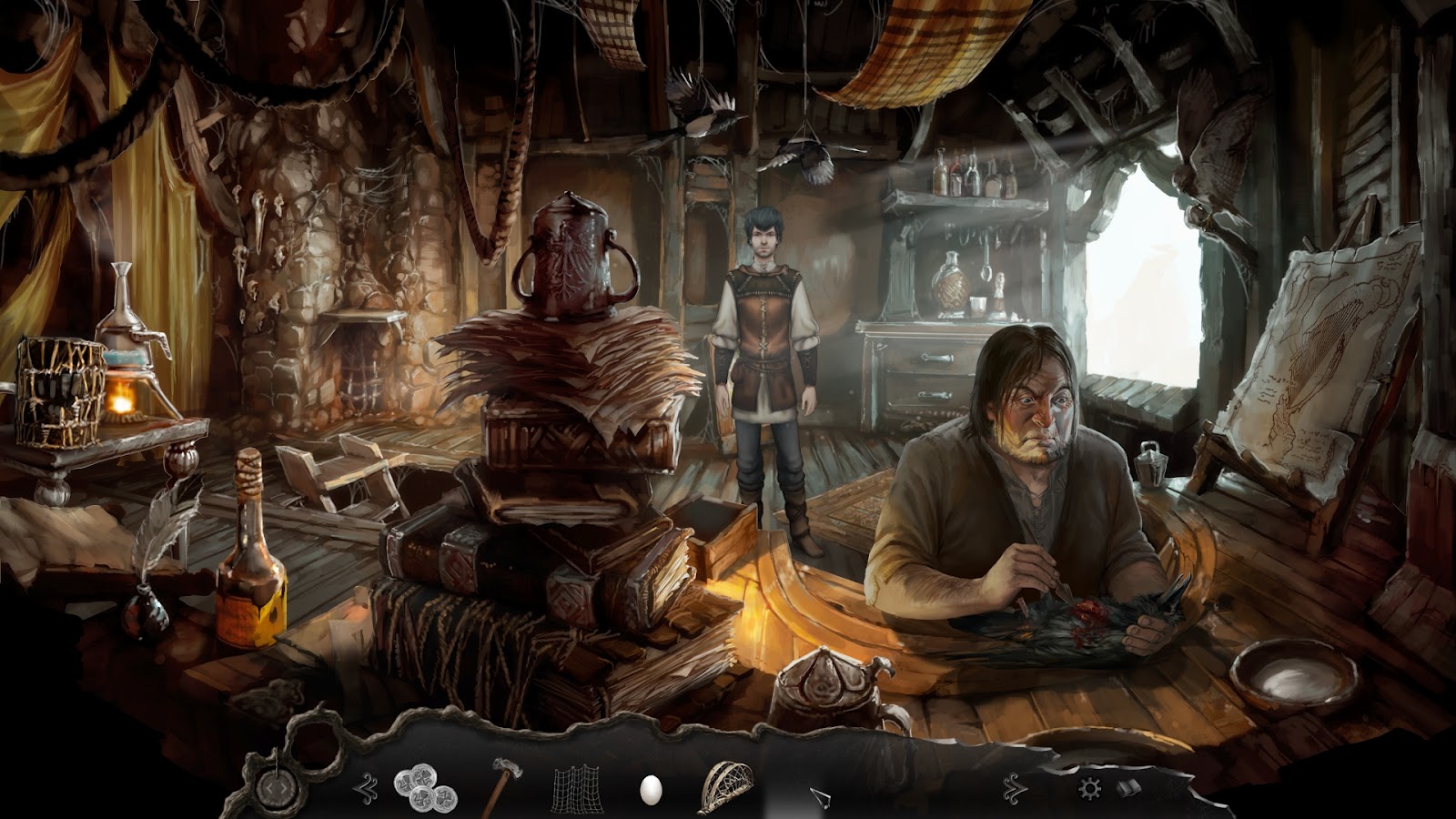 The story is entertaining fantasy fare, with huge assists from art and music direction.  The game itself actually is fairly lengthy as well, but it never feels like it is stalling or making you waste time.  That is huge as many adventure games like this add padding to their time to make the game feel longer than it probably should be.  I think I beat this title in about thirteen hours or so – plenty of value for a game of this nature.

This type of game is not going to appeal to everyone, especially at a price tag that is a bit higher than you usually see for an indie game.  The pace is a bit slow, and this is especially true at the beginning as you participate in some sort of a village game to collect leaves (it sort of reminded me of the festival intro from Neverwinter Nights 2 – at least in tone if not in execution).  There is a sense of depth to the world from the multiple characters and rich history, to the excellent artwork and musical score.  I wish the voice acting and animation had been a bit better, but this is a great effort from indie developer Daedalic Entertainment. 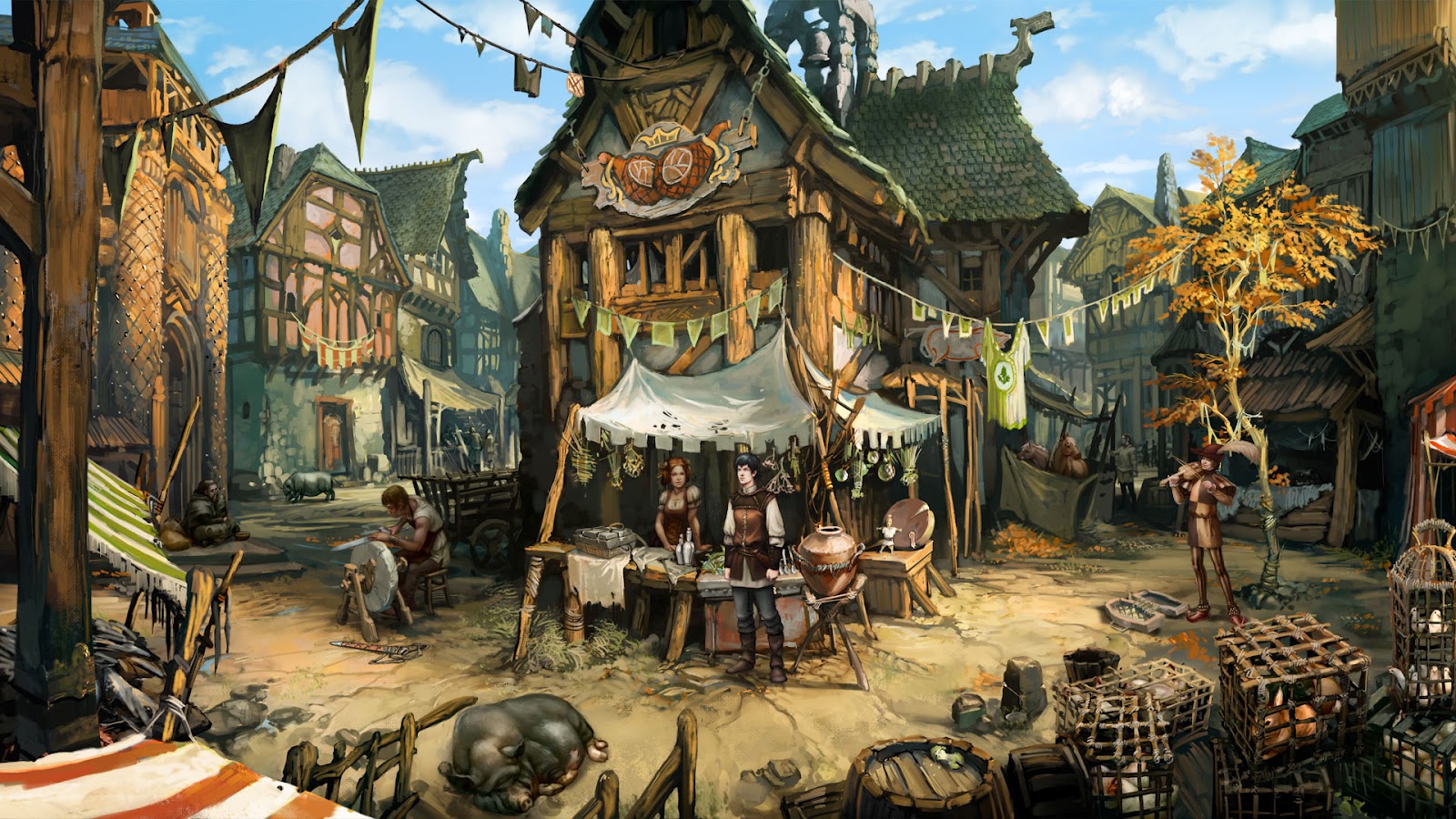