Good grief, am I glad the weekend’s nearly here.  I am going to be pretty busy tomorrow as I head out of town with my wife and youngest for a small trip related to her Girl Scouts troop.  I have a larger-than-normal night of Magic: The Gathering coming up on Monday as well that I need to make sure my top decks are in shape for (I have a very cool new exalted deck I will likely post about here after  Monday when I see how it plays).  Still, I have a lot more than that going on.  I want to remind you that I have a contest still you can enter until tomorrow night for a free iPad game.

So, to kick things off… I got to play the Madden 13 demo last night. 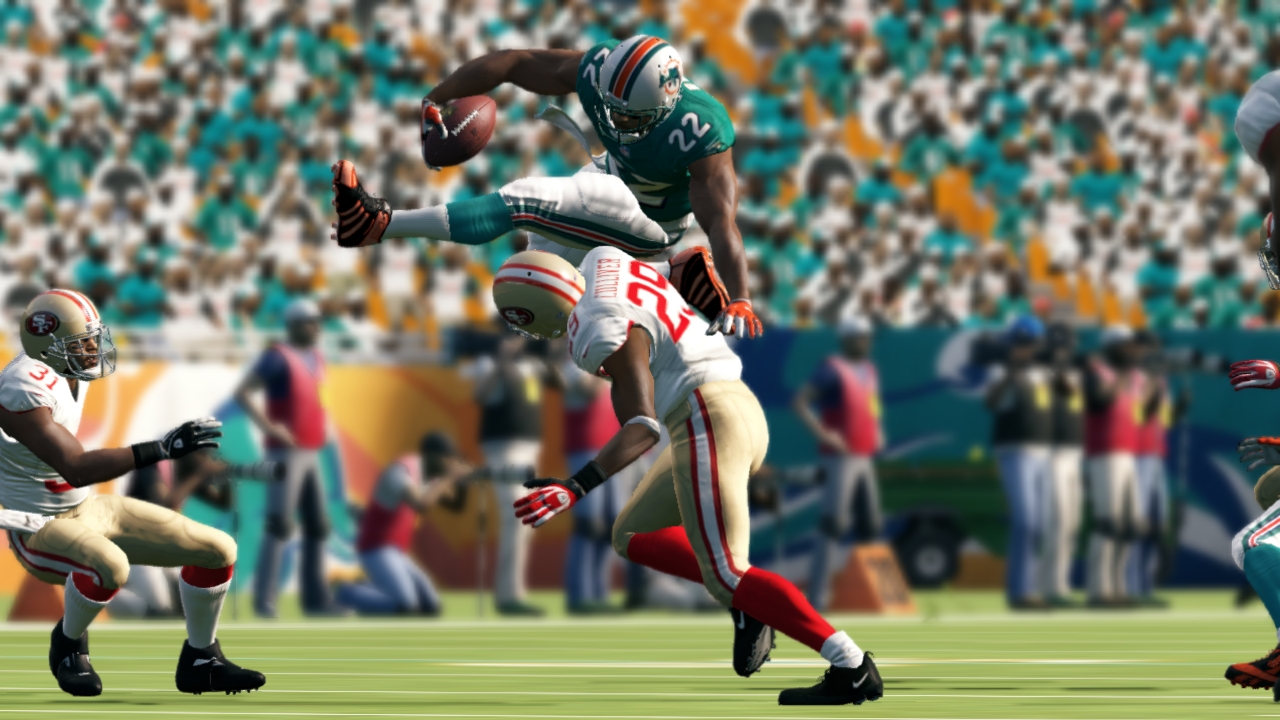 So I got in a couple of games last night.  First I played as the Giants vs the 49ers on Pro and beat them handily.  I was passing all over the field with Manning.  The new pass controls seemed to work pretty well.  I really tried a few tough throws just to see what would happen, like going high and tight to the sideline as the clock was winding down in the first half, and leading my crossing route when my tight end was being trailed by a linebacker with no one in front of him.

I know you can cancel out of playactions now, but those still present a pretty high risk/reward I noticed as twice in that game I thought I had released the ball with plenty of time, but my quarterback inexplicably tucked it and took the sack instead.

The new Infinity Engine is getting lots of publicity right now, and with good reason.  In the one-on-one tackles, I generally did not see anything startlingly new (though I did absolutely kill Moss on a crossing route on a key 3rd and 4 with one of my linebackers.  It was an excellent tackling animation that left the wideout on his backside for several long seconds.), but the pileups and gang tackles certainly did look better as more players were able to participate in them.

My second game did not go so well as I used Seattle against the Redskins.  I got off to a great start, picking off the highly touted rookie quarterback RG III on his first pass, but then I used my quarterback and realized that he is no Eli Manning.  I threw a few picks under pressure, and lost (on All-Pro) by a narrow margin.

Three things stood out to me in this second game when compared to the first:

– I was still able to return kicks and punts effectively on All-Pro, including breaking one off with Washington while spinning out of a tackle for a td.

– Quarterback play, as I mentioned above, feels very different from one quarterback to the next if there is a sizable talent gap.

– Running the ball definitely feels different as well.  Lynch went into ‘beast mode’ as they like to say, several times in my game as Seattle, dragging tacklers and fighting for extra yardage in a way that Bradshaw did not for me in the Giants game.

All in all, I enjoyed it quite a bit and am looking forward to playing more this weekend.

So, what else am I playing this weekend?  Well, I know I had mentioned White Knight Chronicles 2, and I have been playing, but am going to be taking a small break.  This one is much harder than the first and unfortunately seems to require a lot of grinding to get past certain story points, which is a slight drag for me.

However, a coworker loaned me Dragon’s Dogma, and while it does not seem to be doing anything revolutionary thus far, I am enjoying it quite a bit and have already hit level 10 in a night of playing.  I look forward to giving that more of a go soon.

I also am playing a new 4X sci-fi strategy game called Legends of the Pegasus on my PC.  So far it looks to be a pretty deep game, so I am hoping to get some quality time with that in over the next few days as well.

So, my next few days?  Pretty active.  What about you guys?  Anything in particular going on for you this weekend?  Thanks for stopping by!