I have a pretty longstanding history with beat ’em up style games, and for the most part I have enjoyed the genre.  Double Dragon still ranks as one of my all-time favorite arcade games, and I would guess I played through Double Dragons 1 & 2 on the NES several dozen times each.  I am one of the lucky few who still has the arcade version of Double Dragon on my Xbox Live account as well.  So it is safe to say I was more than a little excited when I read about Double Dragon: Neon several months ago, posting about it here at the time. 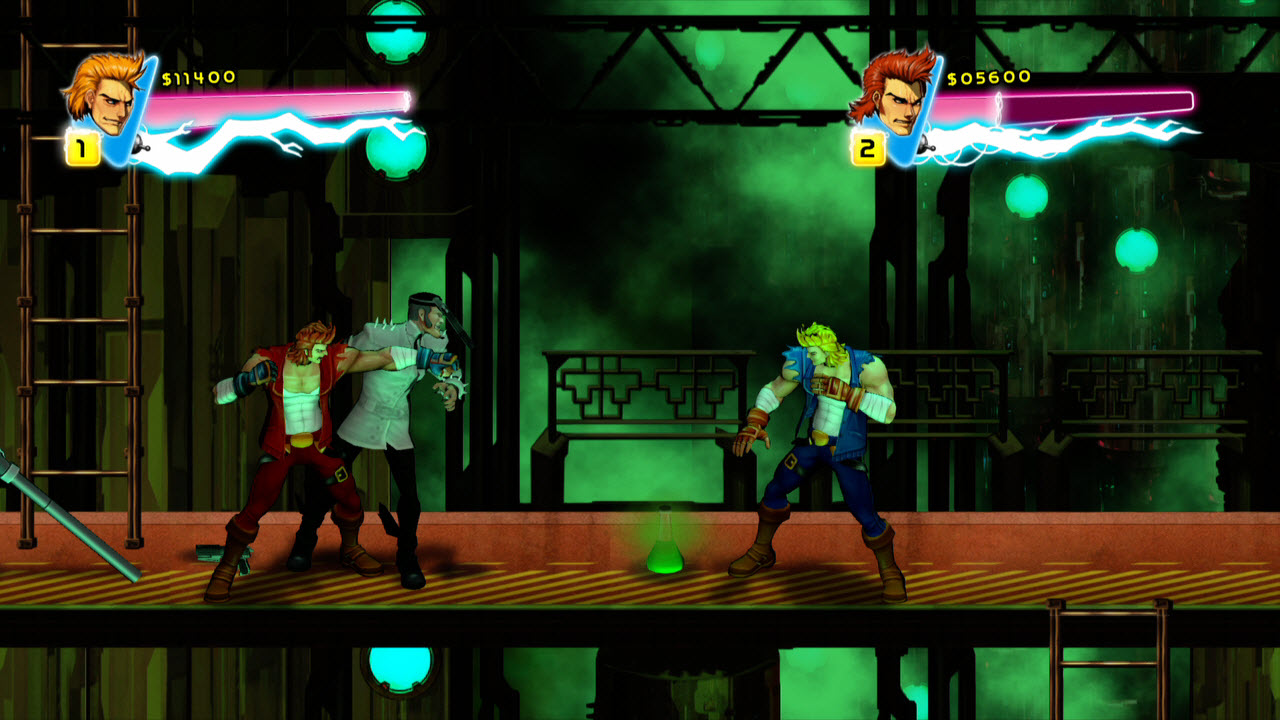 Double Dragon: Neon can best be described as a labor of love.  It is more of a re-imagining of the original Double Dragon than a true remake.  The game still starts just like the classic, with Marian getting punched in the stomach and being carried away by a gang of thugs.  The original game, despite the silly premise, tried to be a relatively serious affair.  The final boss was a machine gun toting pain in the bottom meant to chew through your quarters in the arcade by shelling out one-hit kills.

This game?  Well, a building I walked into flew into outer space and the game belongs to some sort of a freakish sword-wielding skeleton.  This is hardly the only time the development team has their tongue planted firmly in-cheek as twins Billy and Jimmy play air guitar upon beating levels, high five to share health and picked up mixed tapes that unleash their super moves.  If it sounds utterly ridiculous, that is because it is – but that just makes the experience even more fun in my opinion. 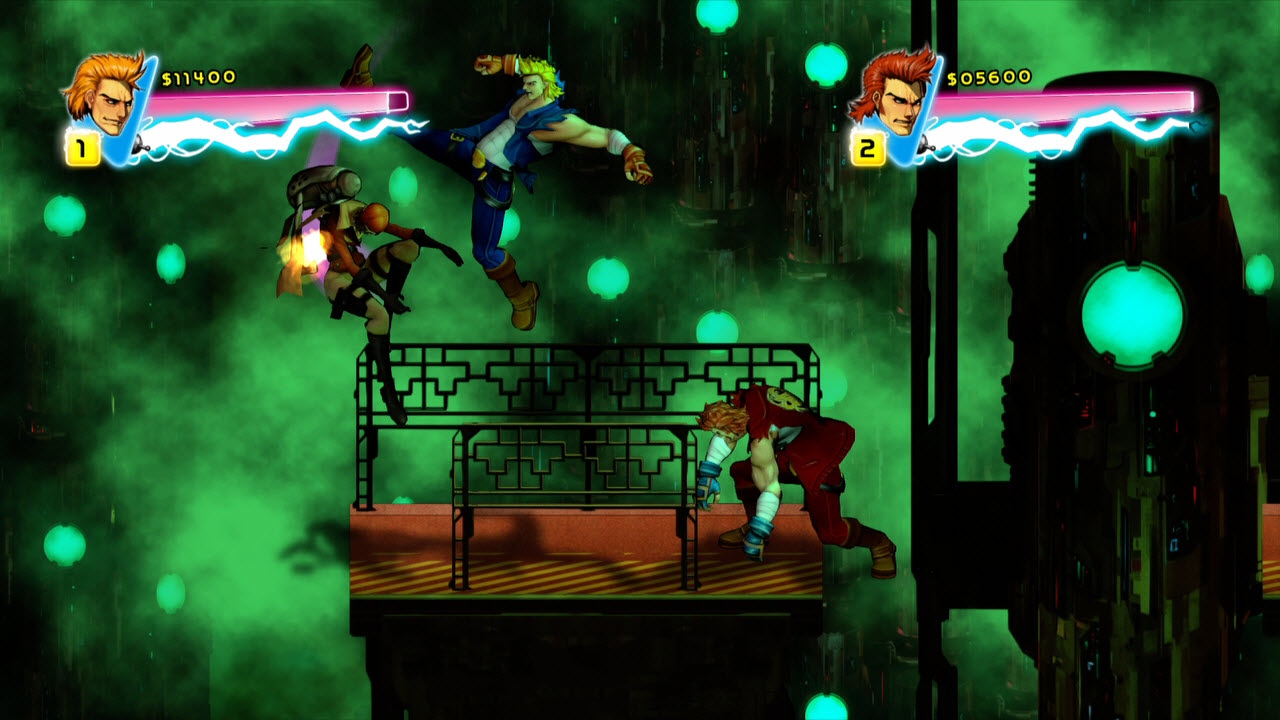 The updated visuals are not not incredibly detailed, but for the most part characters animate well and the vibrant colors used throughout the game were incredibly appealing to me.  The game is far from a technical wonder, but the character models are large and fairly diverse as are the backgrounds. 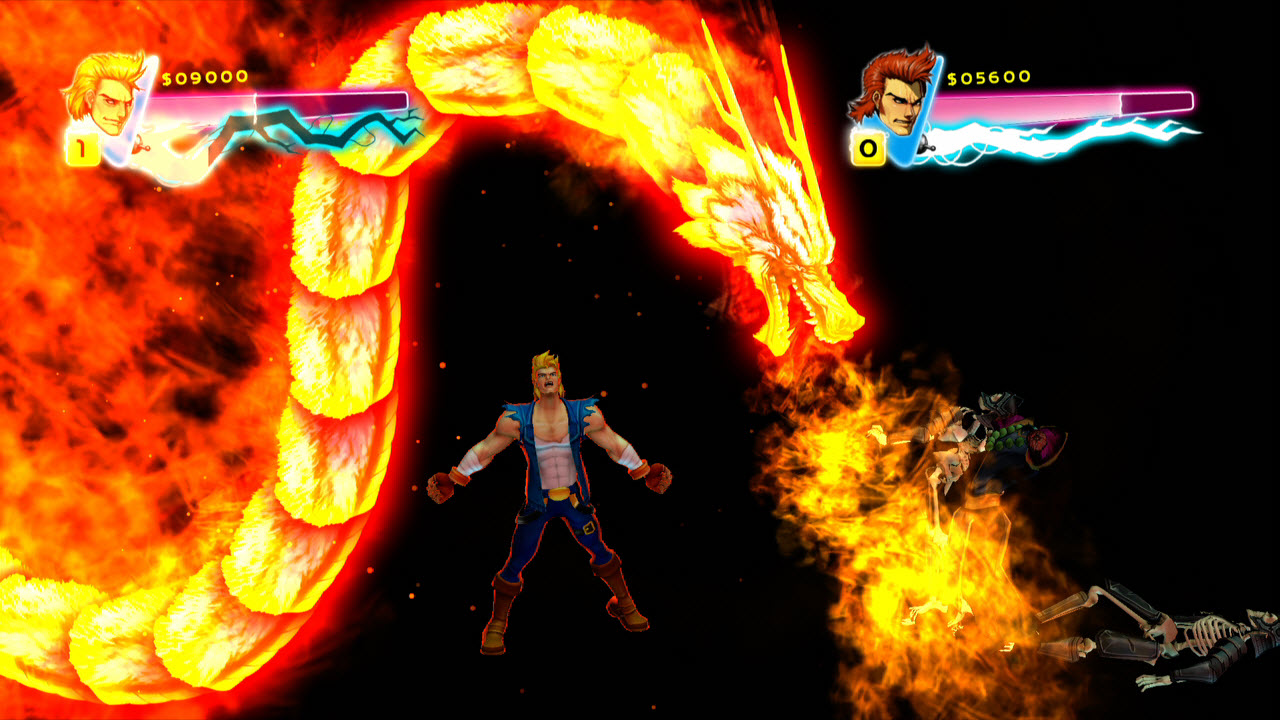 The sound really is nothing special.  You get bits of voice and some pretty generic, repetitive sound effects.  The music however, is a standout.  For starters there are remixed classic double dragon tunes (the song played when you first start the game is still amazing after all of these years, and immediately sparks off some serious nostalgia for me).  The game also uses this mix of music to great effect in the ‘mixed tapes’ mechanic.  Every time you hover over one of these mixed tapes, you get to hear a different song playing while in the menu.  It’s a nice touch. 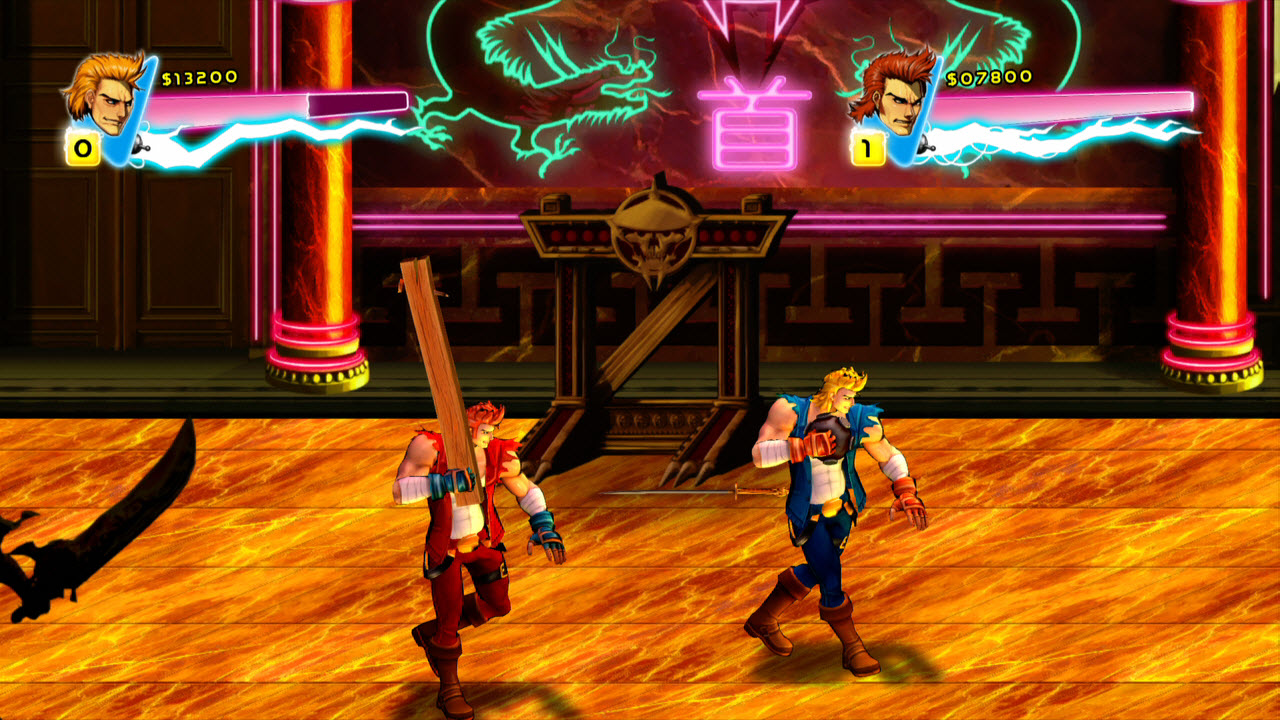 Side-scrolling beat ’em up.  Keep that in mind.  If classic fighting games like Final Fight, Streets of Rage, Golden Axe and (obviously) Double Dragon do not appeal to you, you probably will fail to enjoy Neon’s overall combat.  You have a kick button, punch button, attack button and a pick up/throw button.  You can combo together a few different attacks, but they are all pretty basic.

The mixed tapes provide you with stat boosts and special attacks like a fireball, spin kick or a Golden Axe like screen-wide dragon attack – though these attacks do use up your magic/special meter.  If you enjoy moving up and down on a space to align planes with your opponents and rattling off a series of martial arts moves while trying not to get hit yourself (and I do), then you will feel right at home here.  There are some other tricks worked into the combat outside of the mixed tapes.  You can find weapons to swing or throw, you can use a duck/roll move to evade attackers and you can temporarily boost attack damage and pick up health and money items along the way. 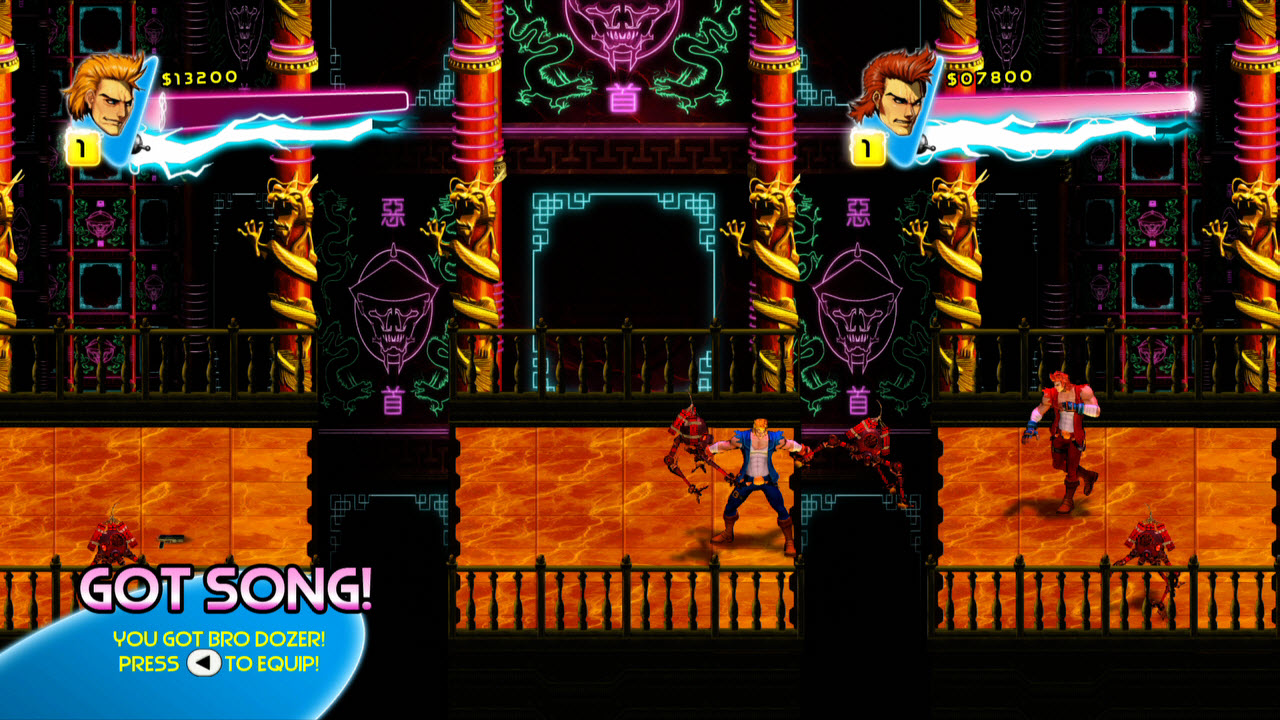 This title was obviously made for co-op, or as the development team coins it: Bro-op.  The good news is that mode is a great deal of fun, the bad news is it has to be done locally.  Wayforward has said that they will be patching in online co-op soon, but that feature is not currently available, and that is a shame.  Not only should that make the game a lot more fun, but a good number of trophies rely on you playing with someone else. 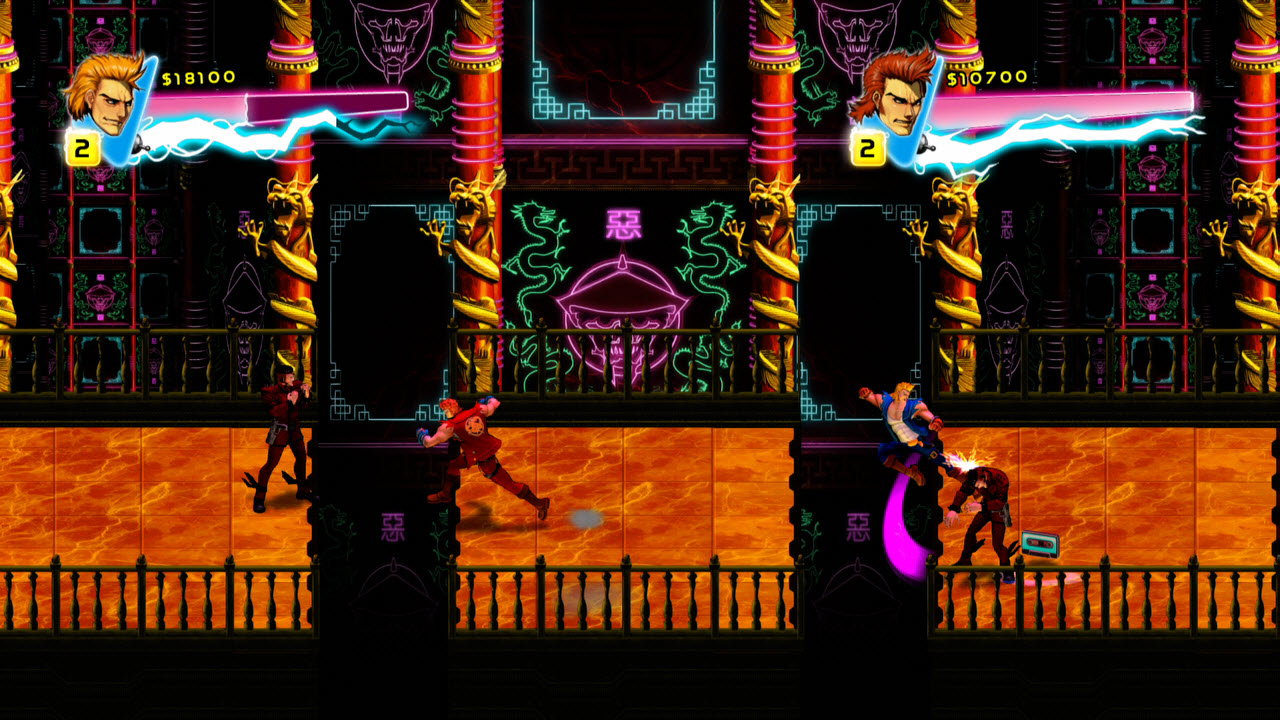 Even with that feature missing, there is plenty to do here.  The game itself only takes about two hours to beat, but in truth that is about two or three times longer than the original title.  There are also different levels of difficulty, the mixed tape mechanic (which adds a layer of strategy in that you can level those passive boosts/skills up by finding more) and locating shops where you can spend some cash to rejuvenate yourself or buy more mixed tapes (this part sort of reminds me of River City Ransom, an old but incredibly fun beat ’em up that blended humor with Super Dodgeball graphics and even had a late game Double Dragon reference of its own). 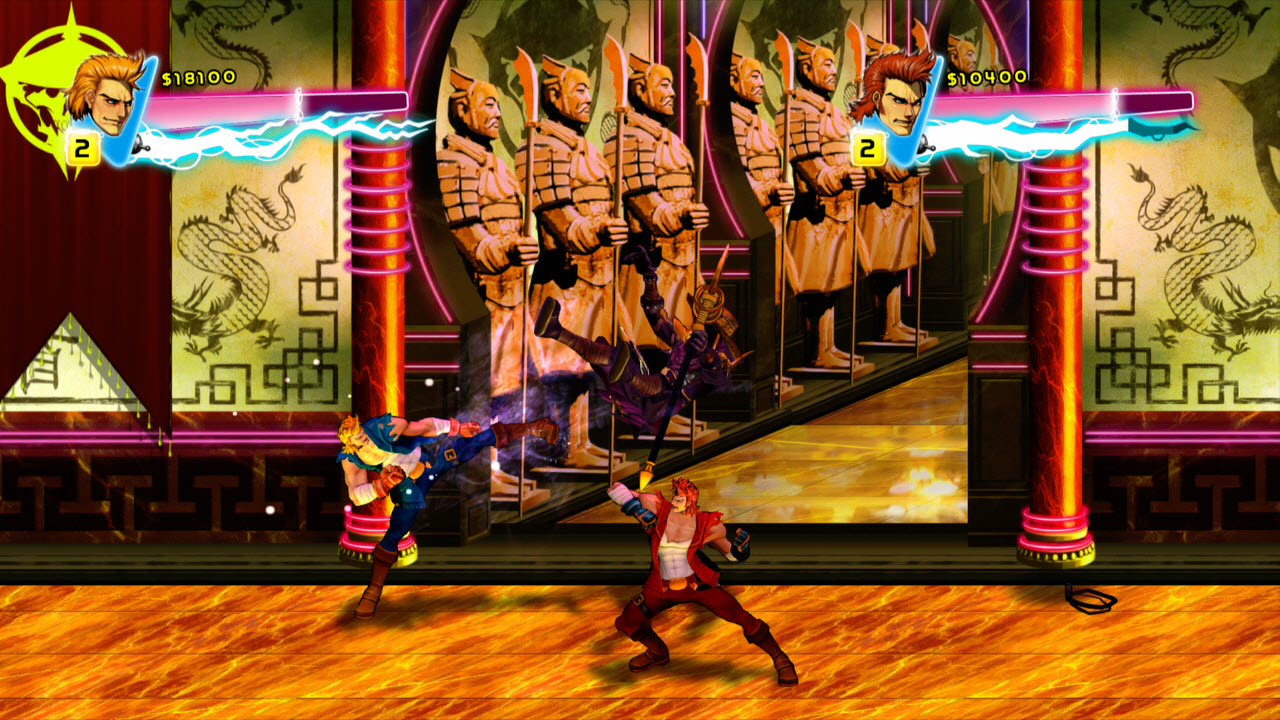 Double Dragon: Neon is far from flawless.  There can be some hit detection issues if the person you are swinging at is not lined up horizontally on your plane just right.  You can take damage ridiculously fast – the game is not what I would consider easy and could be frustrating.  Still, there is a lot to like here.  This game was obviously designed for Double Dragon fans, by Double Dragon fans who managed to put a fresh spin on a game that has been around for a lot of years, and I for one really enjoyed the journey.