Here it is – my Madden 13 review.  It is a fairly sizable one, complete with some video clips as well as images so I do hope you enjoy.  I was going to post this tomorrow, but seeing as my dad is up visiting from out of state and there will be plenty of football to watch this weekend?  I suspect I’m going to have a busy few days on my hands.  Hope you all have a great upcoming weekend.  And now?  For the review…

I really, really love the fall.

Crock pot meals (like chili and beef stew), the cooler weather (I was not cut out for 100 degree + high humidity), the kids start school again (okay, my wife’s probably more excited for that one than I am) and… oh yes, the NFL kicked off last night.  I am a huge fan of the National Football League and have been since Barry Sanders was making defense players around the league look foolish years ago. 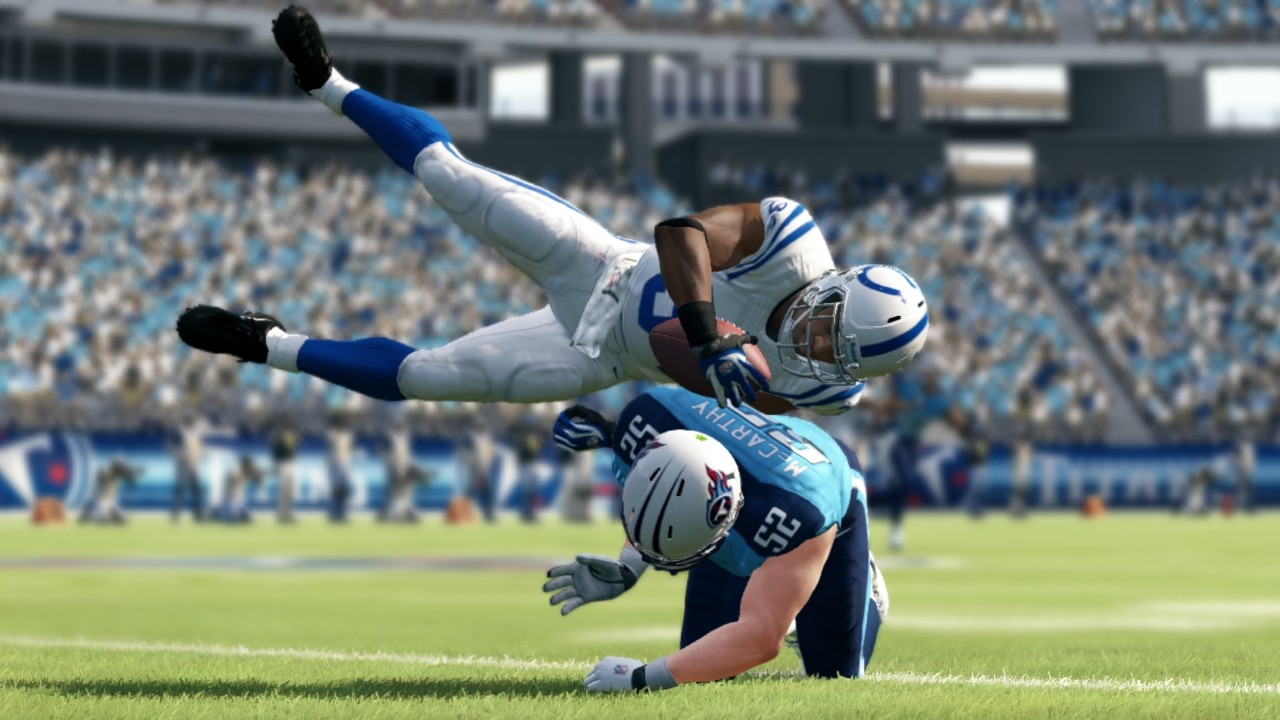 Every year sports titles come out with a new release.  It makes sense really, given that the major sports leagues are all on a one year cycle of renewal as well.  Teams draft and sign free agents and then new stories trickle throughout the off season before training camp and then preseason roll around.  Well, preseason has just come to an end, and now the actual NFL season is about to begin.  With it comes Madden 13.  I have only a few times felt like the latest release of a Madden game was just a glorified roster update, but there are a lot of fans out there who do feel this way.  I suspect that part of it is due to EA’s exclusivity deal with the NFL (which I do hate.  I would love to see some 2K challenge brought back).

So what about this year’s version of Madden?  Is it more of the same, or did I feel there was something new brought to the table?

Overall the game looks great.  Players are well-animated, and the lack of canned tackles and catches makes the game look much more lively than it has in years past.  Character models generally look pretty good (though my oldest made a joke about the dead, zombie-like eyes of the announcers at the beginning of the game), graphics during gameplay look sharp and are informative (though they do linger just a bit long at times and block the action at the start of the snap from time to time) and the overall stadiums look great.  There are still weird items that occur though.  Sometimes players flail about oddly due to the new Infinity Engine, and the crowd lacks depth and variety – they are basically cardboard cutouts.  The figures along the sidelines were described by Coffee With Games as holograms – which was actually a pretty good depiction as they simply move about with no substance to them.  It might be nice to give them some physical presence next year.

For the first time in… a very long time, Madden has done away with the rock and rap songs that have comprised the official soundtrack for years.  Not that I necessarily minded the music, but I welcome the change to a more composed style that matches up better with what you see on Sundays.  The action on the field has progressed quite a bit visually, but the audio is sort of stuck in the mud.  That being said, it is leaps and bounds better than last year’s Madden 12 release, which basically featured broken audio at the worst of times and repetitive, grating audio during the best.  There are still some odd things that get said where the commentary does not match up with the action very well, but at least I do not feel the urge to mute the game either. 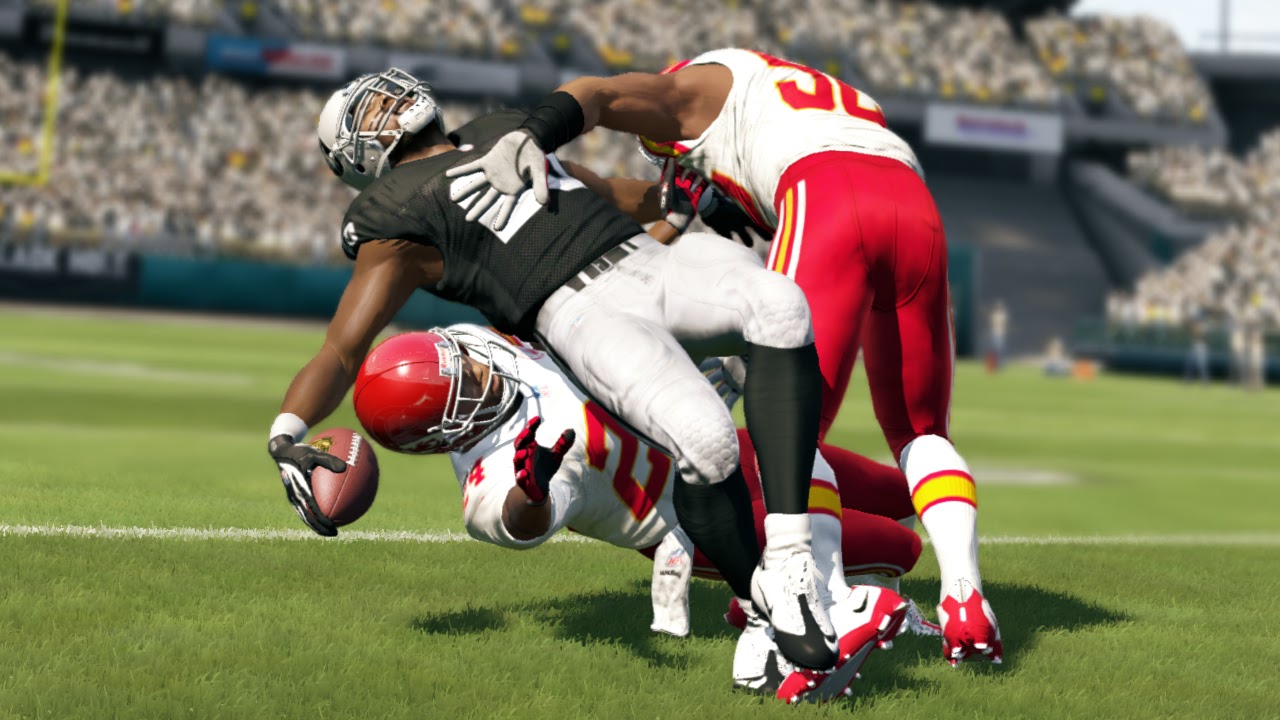 I made a reference to the Infinity Engine above.  What is it?  Essentially it is a new means of handling player collisions.  No longer does a receiver make a totally canned animation on a catch, and tackles are much more fluid now where as in the past you basically saw players dragged down one of several ways with almost no variation.  This impacts the game both visually and in how it handles.  A heavy running back actually feels quite different than a lightweight speedster.  I really like the overall effect, though it is obvious that the engine has some growing up to do.  You get some really odd animations at time, both during play and post-play as characters trip and fall over one another.  My most glaringly funny glitch so far involves a safety where the quarterback just seemed to suddenly lose the football as it magically appeared on the roof and ‘walked’ backwards for a safety.  This is easily the most outrageous example I have seen, and I included a video below.

First off – there are some missing features that will grate on peoples’ nerves.  The offline franchise mode is single player only.  This would have been a deal breaker for me back in college when I would join a handful of my friends in running up multiplayer franchise modes that spanned several seasons.  The option to hold a fantasy draft when starting a franchise is also missing now.  Opponents online still rage quit more often than I would like to see.  These are all very real, very negative aspects to the game. 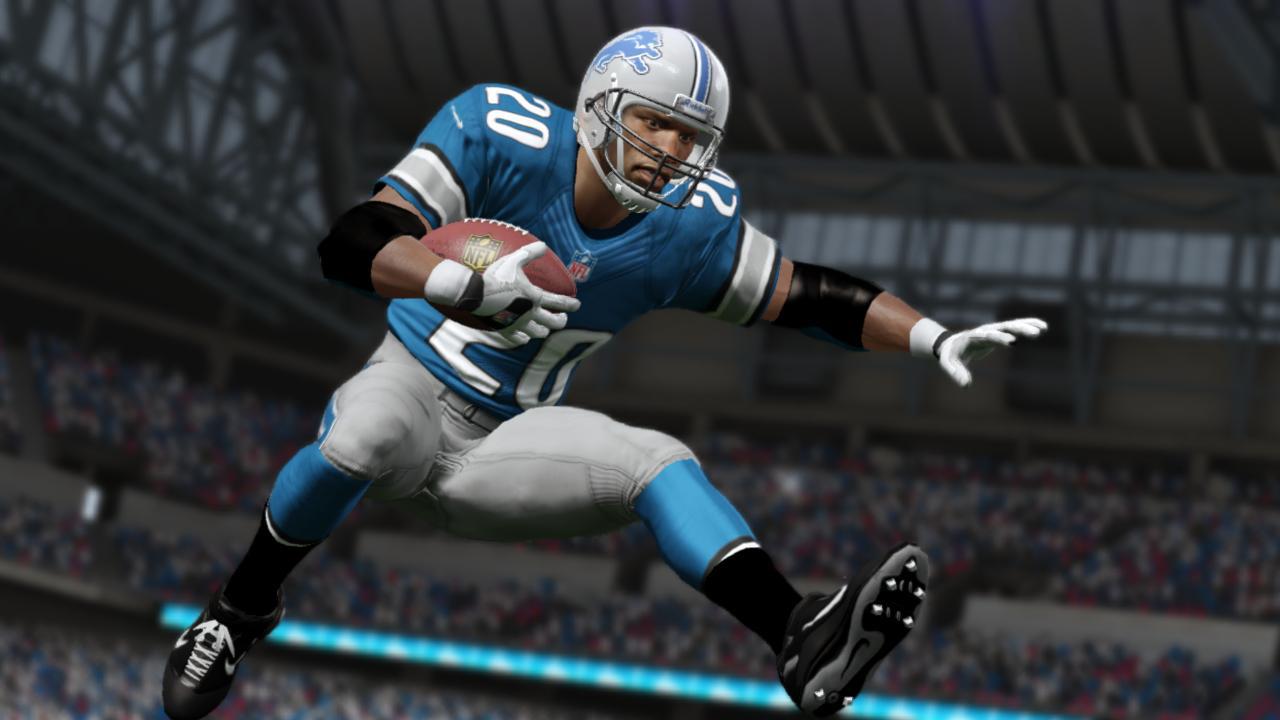 That being said, there are a ton of great modes and features here too.  For me?  These are the features I have been wanting for some time now and they absolutely make the experience for me.  Easily my favorite is the online Connected Career (think of it as a franchise mode) where you can be a player or a coach and play through a fully fleshed dynasty style mode.  In the past the online franchise was there, but it was a shell of the offline experience.  So far, they appear identical to me in Madden 12.  These same guys I used to play Madden franchises with back in college?  Well, we all live in different zip codes now, so that is out of the question – but this new online format has been working beautifully.  Many of the features appear to be really well thought out, such as the ‘auto pilot’ mode if you are going to be away for a time and do not want to hold up your league.  The commissioner no longer has to advance the week – it just happens when everyone tags themselves as ‘ready’.  Of course an absentee commissioner can derail the experience in a hurry, but that is not the fault of the game itself.

The Madden Ultimate Team is back, and while it has never been my favorite mode, it does offer enough depth to keep me playing in small batches.  Essentially it is a trading card game in that you earn coins and buy packs of cards (with better players available with the more expensive packs) that you can then open and make up a team out of.  The packs can be purchased with a microtransaction for actual money, or via coins earned from playing the mode.  With some solo challenges and an online mode, you have a couple of different ways to play.

Other small touches are nice: the ability to save replays to your system and then upload them to your EA Sports account, the roster updates that keep things current, the sports ticker at the bottom of the screen while you are connected to the servers and lots of head-to-head online opportunities.  The addition of Game Face is nice as you can create a fairly decent replica of your face for use within the game.

This is my favorite iteration of Madden to date.  For some people, the changes to online modes and the addition of the Infinity Engine may not be enough – especially if one or more of the removed features was a personal favorite of theirs.  For me Madden is moving in the direction I want – with online franchises, more interesting gameplay physics and lots of stat tracking.  There is even a web interface for people who want to do some of their online career management remotely (for example you can offer a player a new contract or read up on recent news feeds).  This kind of integration is very cool, and probably something we will see even more of in the future.

I am a huge Lions fan – and I like to think this is the year the “Madden Curse” gets broken – and that Calvin Johnson will dominate the league yet again, despite landing on the cover of the game.  On the same note, I like to think the Madden football series has gotten out of its rut over the last release or two and created an excellent sports experience.