I think by now it is safe to say I am a fan of collectible card games.  Of course, this spills out into Magic: The Gathering, but also a lot of the video game based ones like Guardian Cross and Rage of Bahamut.  I had heard some time ago on IGN that Mobage was going to be releasing a Transformers game this fall that would be very similar to Rage of Bahamut.  I have not seen or heard anything else about that (it might even be out for all I know?  Searches did not turn anything up yesterday, however).

I did however get a pleasant surprise when I found out that Marvel: War of Heroes had been released last week for mobile devices.  I had completely forgotten about this title, only having heard it briefly mentioned months ago before I even had an iPhone, and therefore any particular interest in it. 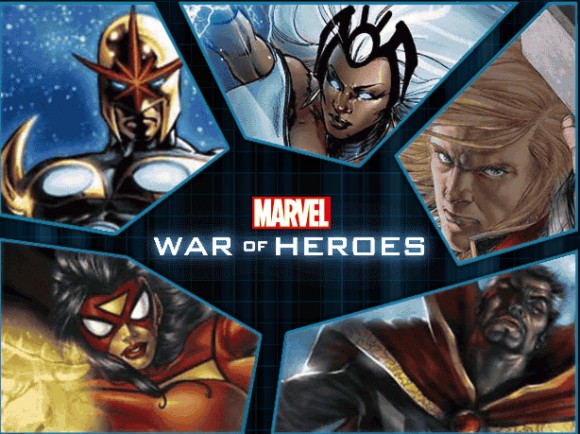 So what are we looking at here?  Well, for those who read my Rage of Bahamut review, a lot of the details are going to sound very familiar.  In truth, I have heard a fair number of people referring to War of Heroes as a fresh coat of paint, or Rage of the Marvel Heroes or Marvel of Bahamut – and there is a great deal of truth to the comparison.  I found it interesting that in their announcement, Mobage referred to War of Heroes as a unique and ‘hand crafted’ gaming experience.  In truth, they borrowed very, very heavily from Rage of Bahamut. 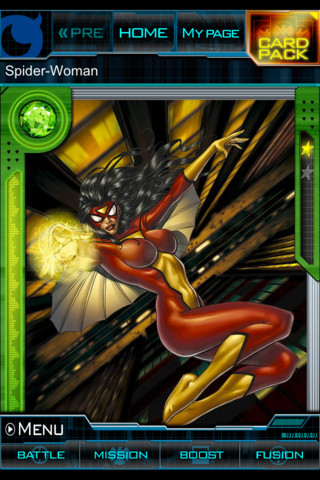 I am not saying that is a bad thing.  I still play RoB just about daily.  I have leveled into the 80’s and win a lot more matches than I lose despite not spending a penny.  War of Heroes uses the same kind of monetizing model as RoB – pay for items that restore your stamina or attack power, or buy packs of cards with better odds of pulling something potent.  They are even doing a good job of dangling the carrot in front of new characters right now, because there is a daily login promotion that allows you access to more powerful packs of cards.  I have seen some very potent cards come out of those packs personally (an SS Rare Incredible Rage Hulk that is easily the centerpiece of my deck, an S Rage Doctor Strange) – but I have also seen it yield some pretty ordinary cards too (like a regular Rare Jigsaw and Punisher). 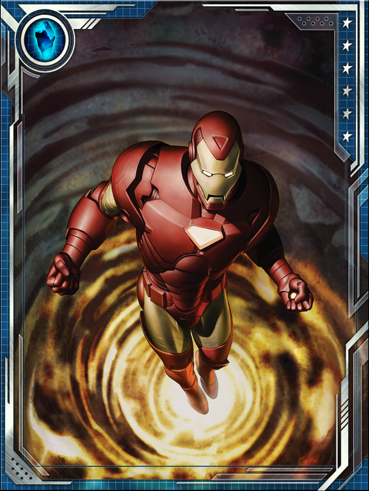 The game mechanics mimic RoB very closely.  You gain levels, complete missions and add friends to gain stat points which you can then dump into Stamina points (used to advance you through the storyline mission that has a chance of getting you more cards, bonuses, etc), or attack and defense points, which are needed to field more powerful cards for the player versus player aspect.

There are a few differences from the Rob game besides just the artistic aesthetics that are worth calling out.  For one, the card fusion system is similar to, but still a bit different than the evolution one found in Rage of Bahamut.  Also, there is a mastery system, sort of a game within the cards that through use they can reach a max value and unlock improved stat points.  This particular twist has kept me on my toes as I may not always be fielding my most powerful potential attack team, because I will slip in a card or two I want to improve the mastery of, in favor of slightly more powerful cards that already have their mastery unlocked. 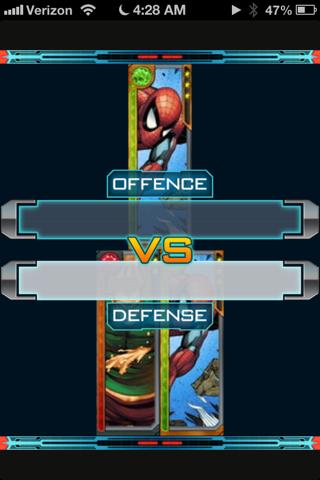 While I enjoy the core mechanics of the game and love the Marvel skinning of it all, War of Heroes is not without a few faults.  For one, there is no audio – at all.  Mind you, that seems to be the case with Rage of Bahamut too – I have never heard so much as a bloop or a bleep, let alone mausic on any of my iDevices, and I use an iPhone 4, my oldest an iPad 1, my son an iPad 2 and my wife an iPad 3 and an iPhone 3.  Speaking if iPads and iPhones, currently the game is playable on all of those devices, but it is only running an iPhone app, so while it looks fine on the smaller devices, things look a bit stretched and pixelated when blown up on the iPads.  RoB has a nice iPad app that not only does a nicer job with the display, but has a couple of smaller tweaks to the interface that feel more at home on the bigger screen.  I am hoping that Marvel: War of Heroes gets the same treatment sooner than later. 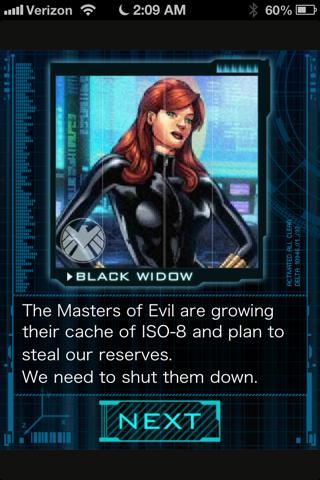 So as things stand right now, there’s a few things War of Heroes does better than Rage of Bahamut, and a few things it does worse, so I’ll score it the same as I did Rage with a 7 out of 10, but hope that Mobage makes use of the still untapped potential in this game like better device support and eventually adding events as well.