A friend of mine recently sent me a weekend invite to try Guild Wars 2 for free.  I am hoping to get a chance to do just that, but we will see if time permits.  It reminded me of this review I have been meaning to put up for at least two months now, and just had not found time to squirt it into the schedule.  I’ve talked about World of Warcraft at length in the past – and with good reason considering the absolutely ridiculous amount of time I sunk into it.  MMO’s in general just really appeal to me (hence the reason I run one of the original ones, a MUD).

I posted several months ago about how I was going to give DC Universe Online a go since it was free to play on the Sony PlayStation Network.  I am not a huge MMO player.  I fiddled with Dark Ages of Camelot and I have played (and now own) my share of MUDs and I did log about four years on and off on World of Warcraft.  I have briefly tried a couple of the other free MMO’s in the past, and they just never ‘stuck’ with me the way WoW did. 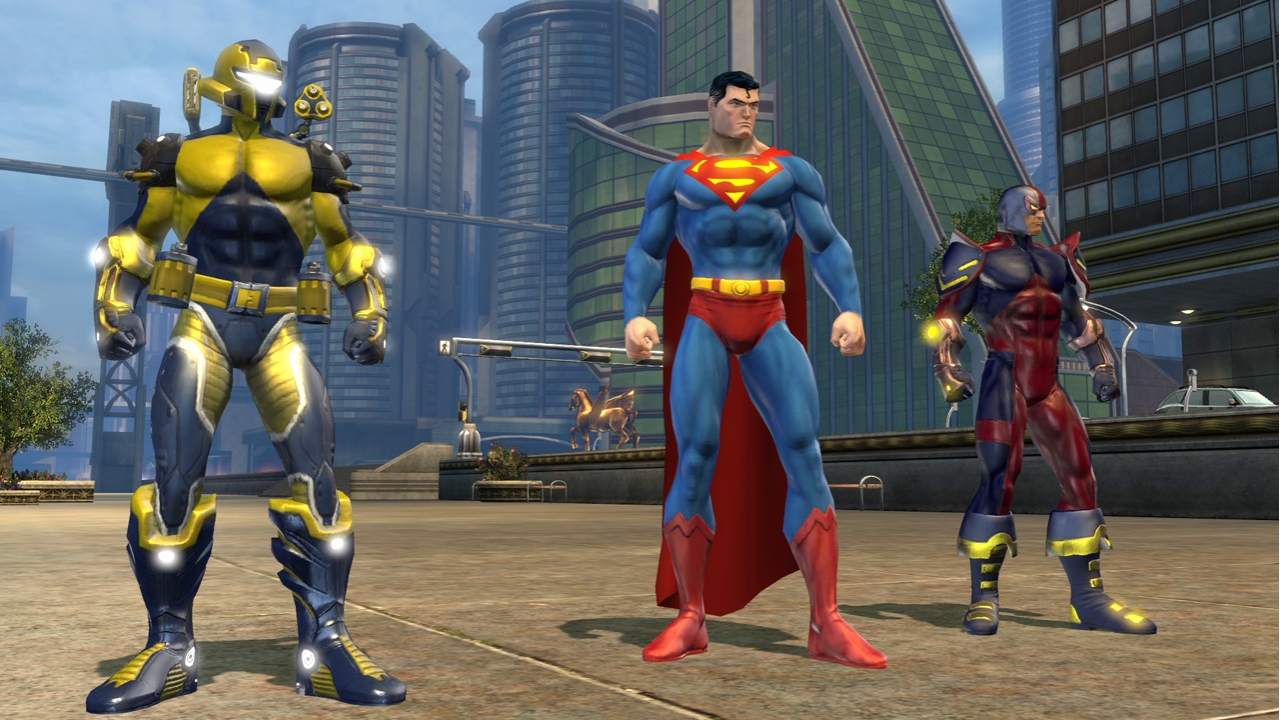 I have always been a bigger Marvel fan than DC – I do not mind coming right out and saying it.  That being said however, I have appreciated several of the DC comics and movies over the years and certainly do not have anything against the franchise.

I really hoped that I would love playing this, but unfortunately after some time, I finally quit.  Not because it was a bad game by any means, but it just never hooked my imagination the way I had hoped it would. 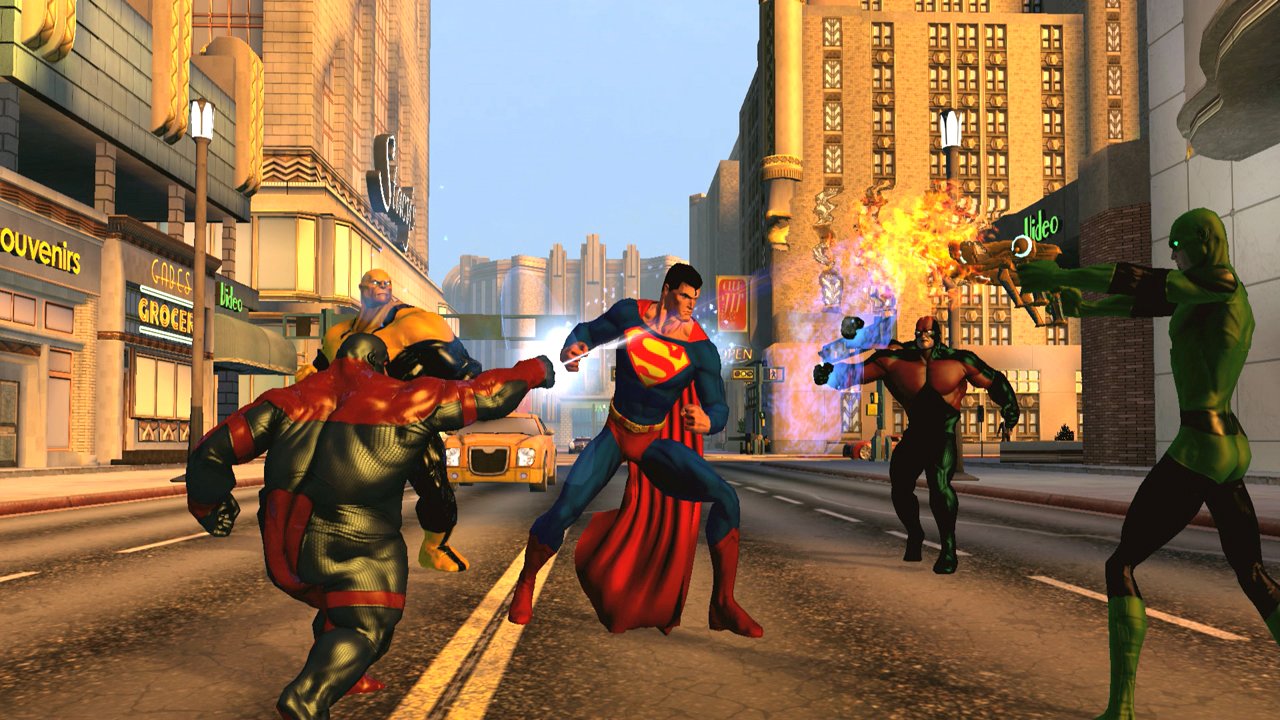 Characters look pretty good, and the city is actually very well designed.  There is a lot going on at times, but the framerate usually held up pretty well – certainly better than some of my prior WoW experiences on my old PC.  There are sacrifices made to help keep things rolling, like frequently objects just pop in with a sometimes surprisingly short drawing distance.  The level of detail could have been higher as well, but no doubt these things were done to help make sure that the game ran smoothly, which really is more important here.  I do want to give a quick nod to the introductory cinematic, which I thought was really well done.  I will include an embedded video of it at the bottom of the review because I think it is worth a watch even if you do not play the game. 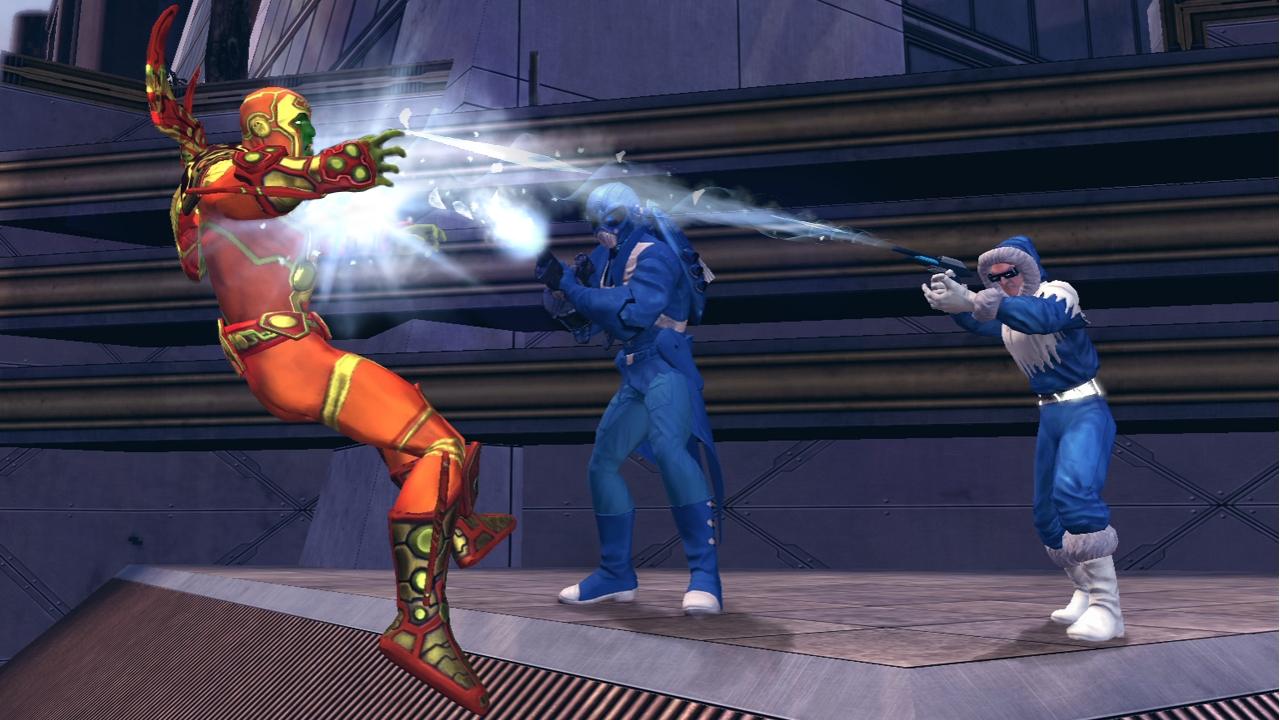 The music never did anything in particular to impress me.  It never annoyed me either, but I am going to keep coming back to my WoW experience and point out that there were quite a few songs in WoW that really helped me feel like I was in the moment as I explored the world.  I never got that feeling from this game’s music.

The voice acting is a pretty mixed bag.  Some of the voices are really good, most are average, some are pretty awful.  Luckily most of the major characters you will interact with repeatedly tend to fall into the ‘good’ category. 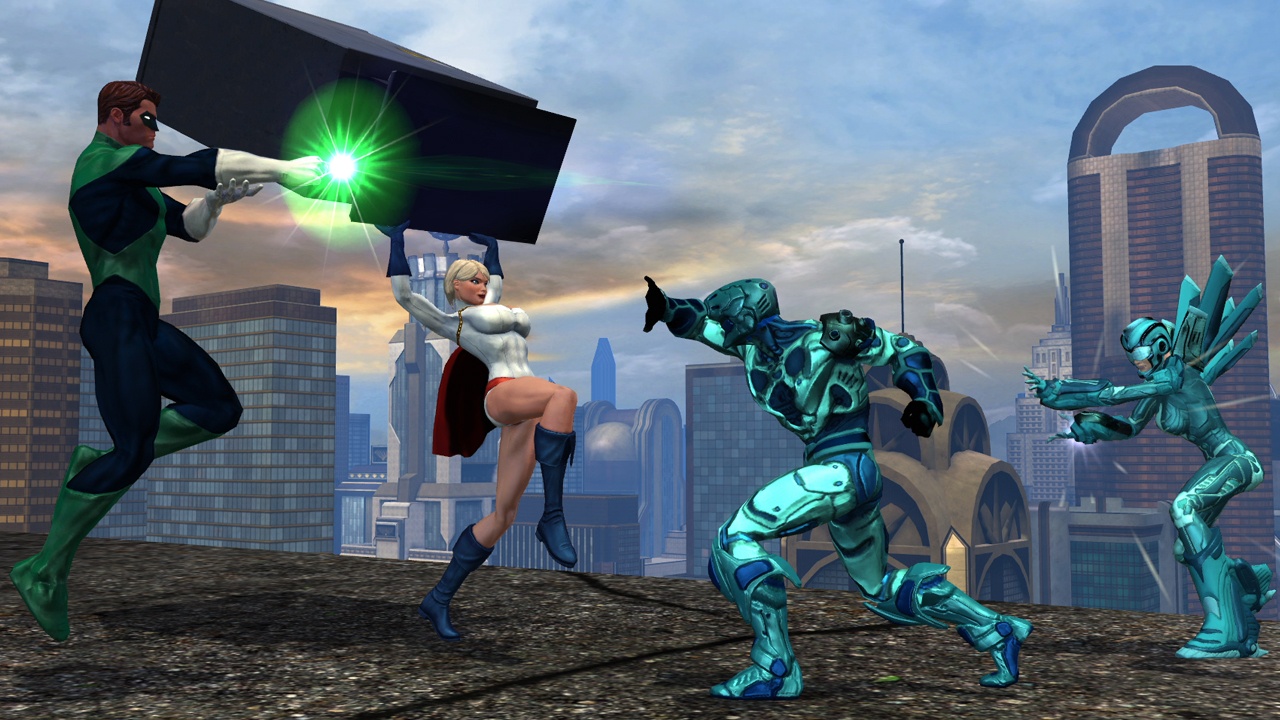 For better or worse, I would compare the combat here to Dragon Age 2.  There is a definite pacing to it, but the combat is a bit faster than what I am used to when I think of an RPG of any sort, MMO or otherwise.  That is the good part, and you get thrown into the fire right away.  Many of the attacks you use are suitably impressive, giving you a good sense that you are in fact, a superhero.

There are some mobility ‘perks’ you can choose from, like flight or super speed.  I took on flight as mine, and found the flight controls to be a bit confusing right at first.  As I was fiddling around the first area, I was getting myself stuck along the ceiling or around doorways fairly frequently.  Once you get the hang of it, it is super helpful.  I cannot count the number of times I got in over my head in the street taking on bad guys, and had to take to the air to escape – and was able to do so successfully. 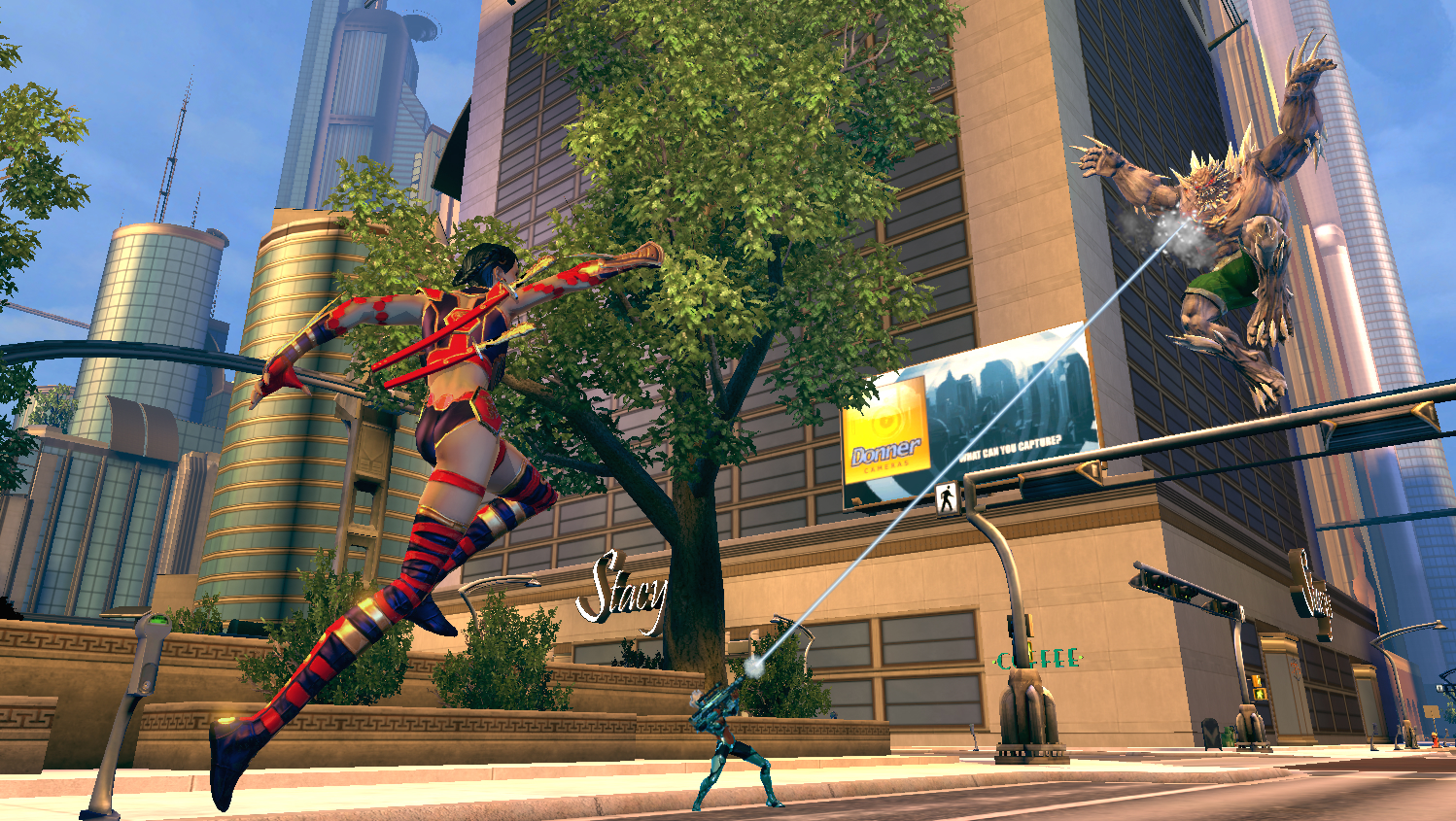 On the one hand, it is a lot of fun to create a character.  The list of customizable appearances and powers is pretty extensive.  You can purchase some additional content to give you additional powers to choose from, but I stuck to strictly free to play.  Queuing up was also pretty annoying.  I have been told that there are essentially a few ‘lines’ you get to stand in to start playing, with those who purchase getting in right away.  Freebies have to wait though – sometimes for incredibly long stretches of time.  I really do not like that, but I understand it is the reality of the free to play model.  Still, there were several times my anticipated wait was nearly two hours.  I also had one session early on where I had been connected for about 25 minutes, and the server inexplicably booted me off.  This might be easier to handle on a PC where you can do other things while the window is loading, but on the PS3 it just occupies your whole gaming console.  I went ahead and played some PSP and 3DS in the meantime, but it was still far from ideal.

It is notable that Sony found a way to allow PlayStation 3 owners able to interact with their PC using brethren in this game, and overall the controls work well with a pad – which was probably a challenge in and of itself.  Dual faction (hero and villain) probably ups the replay value some for those who enjoy the game enough to stick with it.

Quests were alright to start, but they began to lose their appeal fairly quickly.  I did have a couple of storyline missions that were fun as I made my way through a hideout in anticipation of having a showdown with an actual villain from the comics and not just a generic street thug.  I also felt like I could effectively play solo – which may sound odd – but is how I generally play my MMO’s (seriously, my first account on World of Warcraft, I got to level 60 and joined in groups maybe four or five times in total).  I am sure it is more effective to group, but I was able to complete most of my objectives without dying solo. 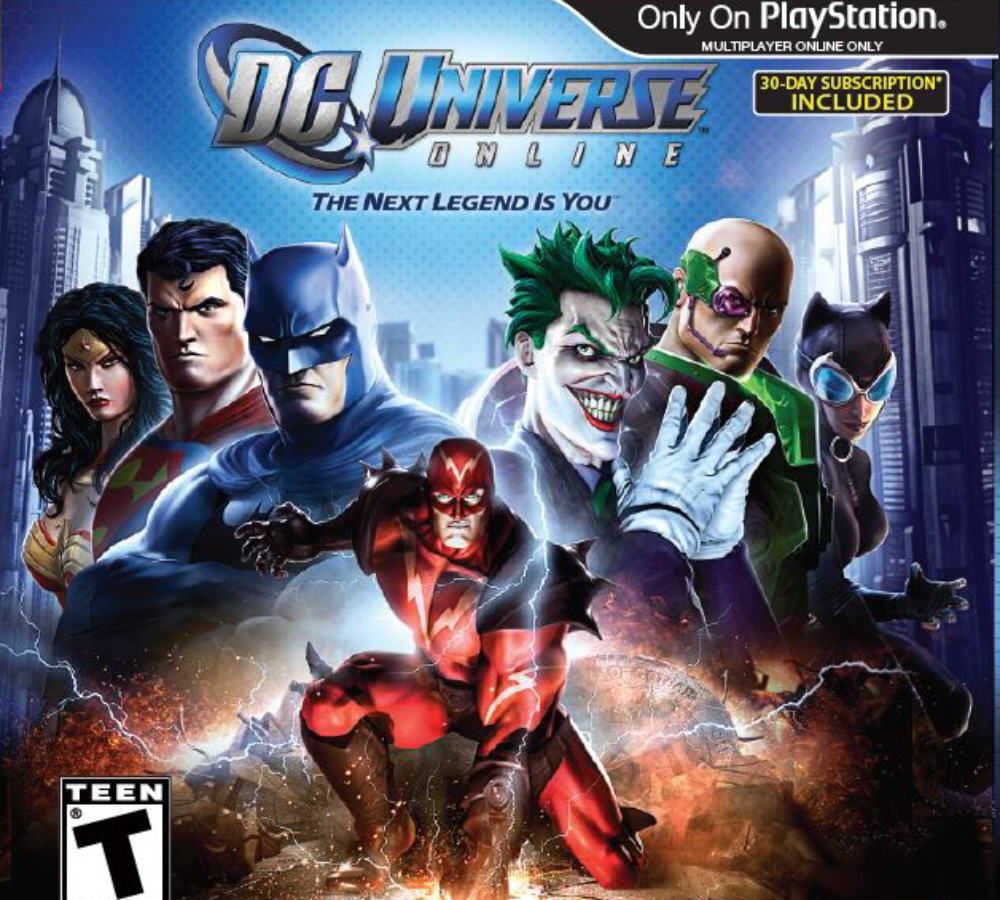 DC Universe Online served as a decent distraction, but it never pulled me in the way I had hoped it might.  The game itself felt just a little shallow, and the world while fun to visit, seldom left me waiting in awe of some new discovery or exploration.  Technical issues also got in the way of things.  I already touched on the incredibly long wait periods I had to sit through at times, but then there is the matter of physical hard drive space.  In total I believe DC Universe chewed up about seventeen gigabytes of space, give or take a bit.  That is a pretty sizable chunk when I have a service like PlayStation Plus already eating up quit ea bit of space with my downloaded games.  Since it is free, the price is probably right for some people, but in the end I would rather just play the other games on my backlog and wait to see with the Star Wars MMO is like when it comes out free to play later this fall.