I have been following Dragon’s Dogma pretty much since it was first announced.  I play a wide variety of games for the most part (just this week I have been playing a JRPG, a trio of mobile CCG’s, a platformer on PSN, an NFL game on my PS3, a FPS on my 360 and an online competitive medieval title on my PC – there’s been variety).  That being said, Dragon’s Dogma falls into the space I am most comfortable in – Fantasy RPG.  Obviously, there is a lot of wiggle room from there, whether you are playing a more turn-based affair like Final Fantasy or something more action oriented like Dark Souls. 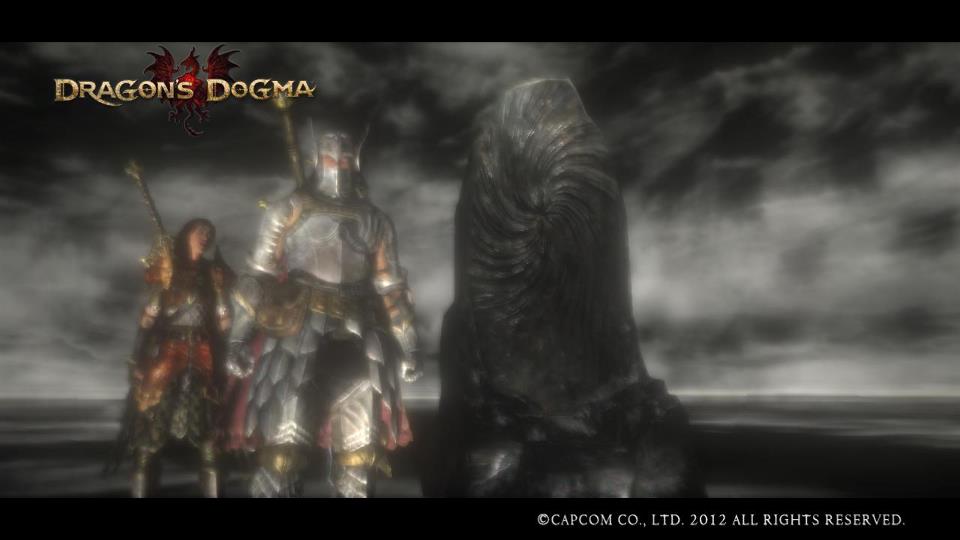 I think what I liked most about Dragon’s Dogma is I felt bits and pieces of lots of other role-playing games in there, with a few new wrinkles added to the formula.  That being said, that is not to say the game is perfect.  Far from it, Dragon’s Dogma left me wondering ‘what if’ somewhat often – as I feel there were some really great ideas, variable levels of execution and a lot of potential left on the table.

There were times I felt the art direction was excellent, but sometimes the technical execution was lacking.  Somewhat stilted character models, limited animations, odd clipping/floating items (my broadsword hovers several inches off of my back when it is sheathed) and horrible handling of light marred what could at times be a very pretty game.  Light is an important part of the game.  There are many sections of Dragon’s Dogma that take place in dark, underground passages.  Sometimes there is light provided, but often you are faced with inky blackness and the developers do a great job of building tension with it and surprising you with your enemies.  The problem is?  The lighting effect is often ugly.  For example, I have a screenshot below I took from within the game (using the game’s output to Facebook option – that is actually where all of the images in this review come from) that was incredibly dark, despite having a lantern lit on my side.  In order for almost any of the scene’s details to show up outside of a three in radius, I had to tweak the image in an editor first.

Another small complaint is the gear – which generally looks good, but you have a limited number of appearances at your disposal.  What I mean by that is if you want the best gear in the game available to you at the time, you are going to buy it and it may not fit the ‘look’ of your character or pawn.  Some color or customization options would have been nice.  Hardly a deal-breaker, but Dragon’s Dogma really tries to give you some control over your pawns in their appearance, voice, talkative tendencies and more so they stand out from one another.  Being able to do more with your gear would have furthered that objective.

All of that said, there are certainly times when Dragon’s Dogma can look really good.  Standing up on a high mountain’s edge seeing birds moving about below while a mammoth cyclops blocks your path can be a breathtaking scene.  Walking through an open field and seeing a large shadow sweep over my team as I look up to see a griffon flying by before circling around to dive was one of the more memorable moments for me in the game. 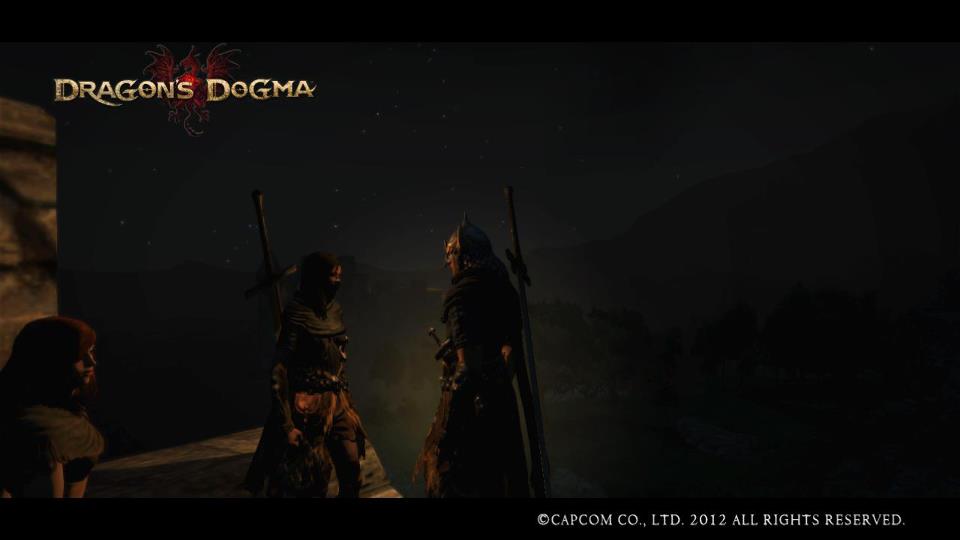 Again, I’m sort of torn here.  There are a few times when the music seems to be having an identity crises.  Most of the game has typical orchestral notes behind it, but the title screen in particular has a sort of oddly fitting rock/guitar  thing going on that just seems out of place by comparison.  Even then, the traditional soundtrack is seldom memorable, though there is plenty of voicework to be had.  It is decent more often than not, though your hero is of the White Knight variety – silent throughout.  I know there is debate on whether a character should speak or not, but I generally prefer to have voice acting.

Your pawns babble a lot, and most of the time it is fairly unimportant, though sometimes they do give some quality gems of advice along the way.  This is a somewhat noisy game – spells, weapons, beasts and chatty pawns combine to make some scenes feel particularly hectic.  Most of the time, I did not mind though – it breathed some additional life into the proceedings.

The combat in Dragon’s Dogma is probably one of the game’s shining points.  It has a Dark Souls kind of third person, action oriented feel to it.  The climbing mechanic in particular was fun, as I was a melee warrior.  One scene in particular that stands out to me was a battle against a chimera.  I was on a higher ledge and ran and jumped off of it.  Our ranger was off to the side firing arrows at it while my mage was giving my weapons a fire enchantment.  My other pawn was a warrior who was trying to draw its attention.  As I jumped off of my elevated platform, I pressed the button to grab and latched onto the goat’s head from above.  Once I was holding on, I began to rail at it repeatedly.

Similarly, there was a griffon that grabbed onto my pawn Isabella, and even as you progress to higher levels in the game, being dropped from a significant height can mean death.  I got a running start and clambered up onto a ledge and got another running jump and landed on the griffon’s back and started to pound away at it.  Had it gotten much higher, it almost certainly would have killed Isabella when it dropped her, but the three of us came crashing down together and the griffon absorbed much of the impact, allowing us to kill it.

These are some extreme examples of course, but beating these larger, more powerful foes is satisfying and even wandering about the world encountering lesser foes was generally fun.  Not everything was perfect on this front however.  Stamina drained far too quickly while running and climbing for my liking.  Escort quests are almost always my least favorite in RPG games (seriously, they drove me nuts in World of Warcraft) and they are not any better here.  In fact, they can have some pretty dire effects on your game since the NPC’s are often ones you are meant to interact with later on, like an inn keeper who could die and no longer be available for you to interact with at all.

Also, the world itself could have been better – but I am actually glad it was not.  In a title like this, where you can pull up a map and see the world, games like Kingdoms of Amular and The Elder Scrolls have spoiled us with fast travel.  Here, there is almost no fast travel to speak of.  Later in the game you can pick up a special crystal that can be dropped in a location and then if you have ferrystones you can choose to return to either the capital city or to that location you dropped the portal crystal at.  This means you spend a lot, and I do mean a LOT, of time just walking around from one quest to another.  This feels a lot like unnecessary padding after you have explored the entire map, and led to me skipping some quests near the end just because I did not want to bother with the trek. 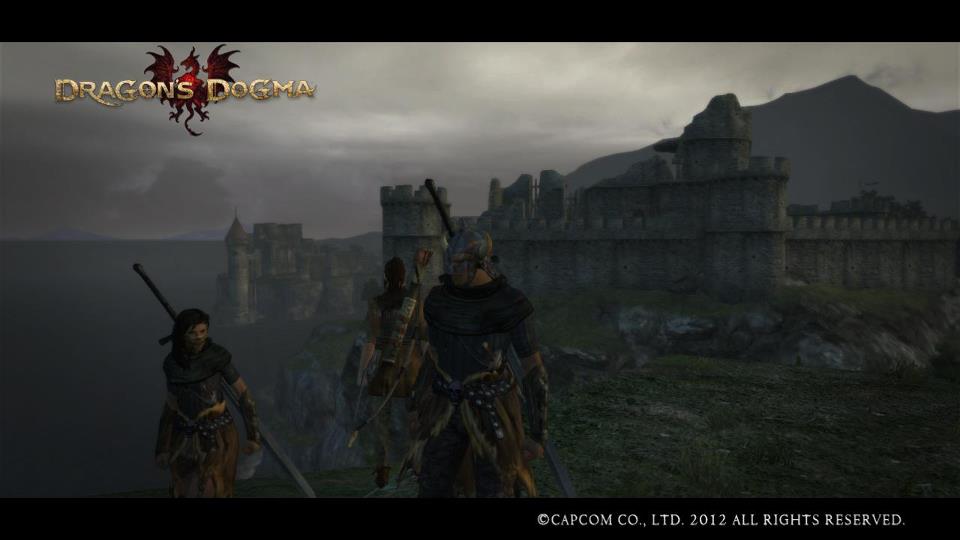 I got frustrated early on with some of the game’s mechanics.   The lack of fast travel was annoying, the quests were fairly mundane most of the time: kill fifteen of this, collect ten of that, escort this person from here to there.  As you gain levels though, and add skills to your character, and get more interesting quests (one standout is where you have a handful of assassins waiting to take you out at night in certain regions, and if you ferret them all out and kill them, you get to take on their leader) the further you burrow into the game.

The storyline starts interestingly enough with a massive dragon attack (feeling somewhat similar to Skyrim to me on that front), but then it… really does not do anything terribly interesting until the very end.  I will steer away from spoiler territory, but Dragon’s Dogma carries on a bit longer than I expected it to near the end, and that was actually the most interesting part of the tale.  Other parts of the story make far less sense as your actions only sometimes seem to carry any real weight.  The romance options feel sloppily handled from what I have read.  Now in the context of my game, my character’s romantic interest made sense, but I have read other accounts where someone becomes their character’s romantic interest – and it made little to no sense.  Doing quests for someone means they could wind up your romantic interest – whether you want them to be or not.  This is an example of an area that just did not quite get fully fleshed out.

The pawns – I have mentioned them a few times – are probably one of my favorite aspects of the game.  You create your main character, and then you create a pawn as well.  Their creation process is just as detailed as yours, and they become a very important part of your team.  You can hire NPC pawns from within Dragon’s Dogma itself, but if you have an online connection, you can hire the pawns of others.  Some of them are very creative, some of them a bit less so (Gandollff – a mage with gray hair in robes.  Okay…), but I liked seeing my pawn, Isabella, return to me saying she had gained knowledge and a small reward from helping someone else out on their journey.  My friend who loaned me the game but had not beaten it turned right around and began to play using Isabella as one of his hired pawns in his adventure.

There is also a dragon, the Ur Dragon, that is something of an online event in that he is incredibly powerful, but over time people can fight it and damage it and it adds a level of community and teamwork as you whittle down its life and everyone involved then benefits to some level when he is beaten, whether they are still there at the time or not.  All of these elements add a lot of life to a game that probably took me about fifty hours to beat as it was.  They all left me wanting maybe just a bit more, but I feel like the potential is there – just not fully realized.

I had more fun than not with Dragon’s Dogma.  I sunk a lot of hours into it, talked it over with a couple of friends who played and enjoyed it as well.  We had fun using one anothers’ pawns in our parties (though eventually I outpaced them all in terms of completing the game and leveling up) and talking about it later.  A lot of really good ideas got pulled in, and some of them melded better than others.  Some new ideas were also tossed into the mix, and overall it made for a good game that could have been better.  This makes me excited however, as Capcom has announced that they will be releasing a sequel to Dragon’s Dogma.  There are lessons to be had here, and I for one am hoping Capcom can learn from them.  If they do, Dragon’s Dogma could become a special RPG series. 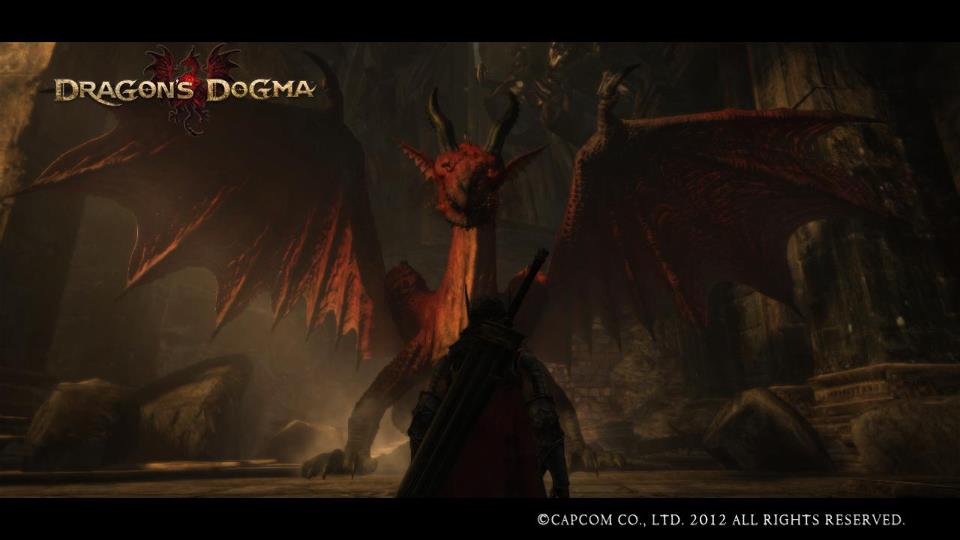