NBA Jam has been around forever.  I did a Retro Reflection on one of the earliest console releases, loved it in the arcade and even reviewed the more recent Wii version on this site as well.  I am a huge fan of the NBA (and the Pistons in particular).  For those unfamiliar with the series, this is two on two ‘streetball’ but on the shiny hardwood of NBA arenas.  You will not be playing an NBA Simulation here like the excellent NBA 2K12, but instead will be shoving, alley-ooping and catching fire in a much more arcade style game. 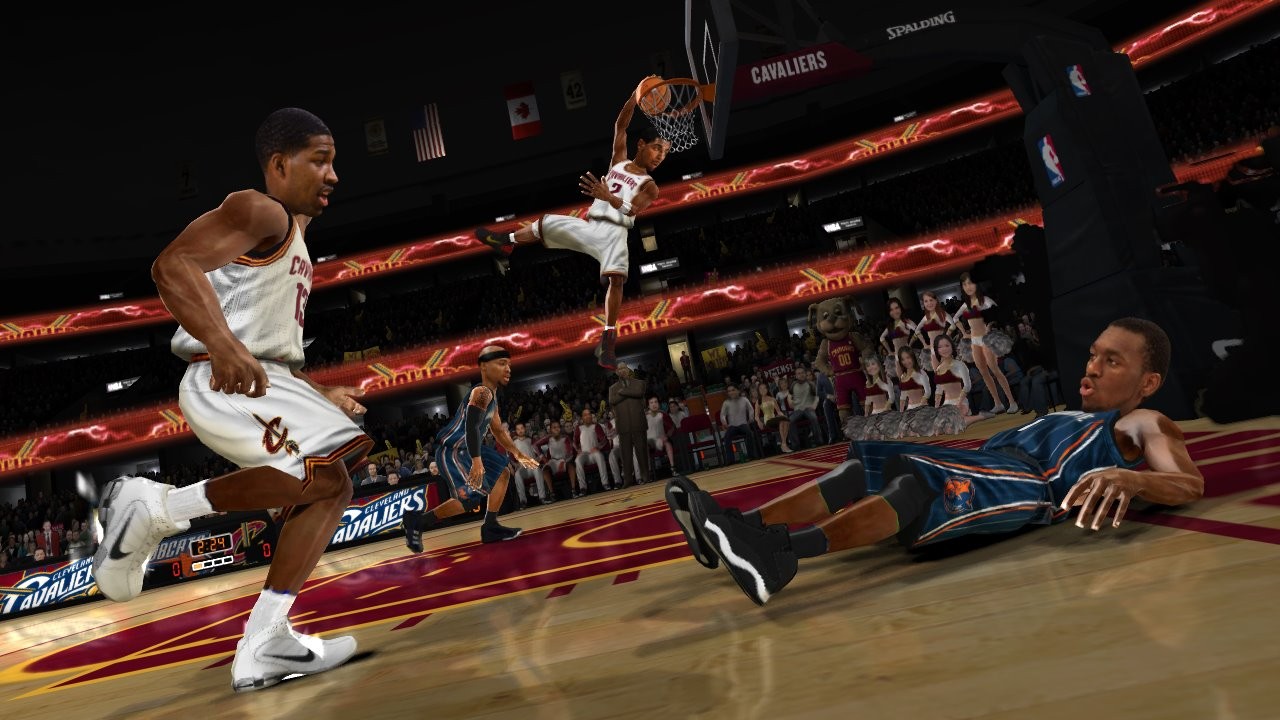 So now that you know how NBA Jam works, the next question is – was it any fun? 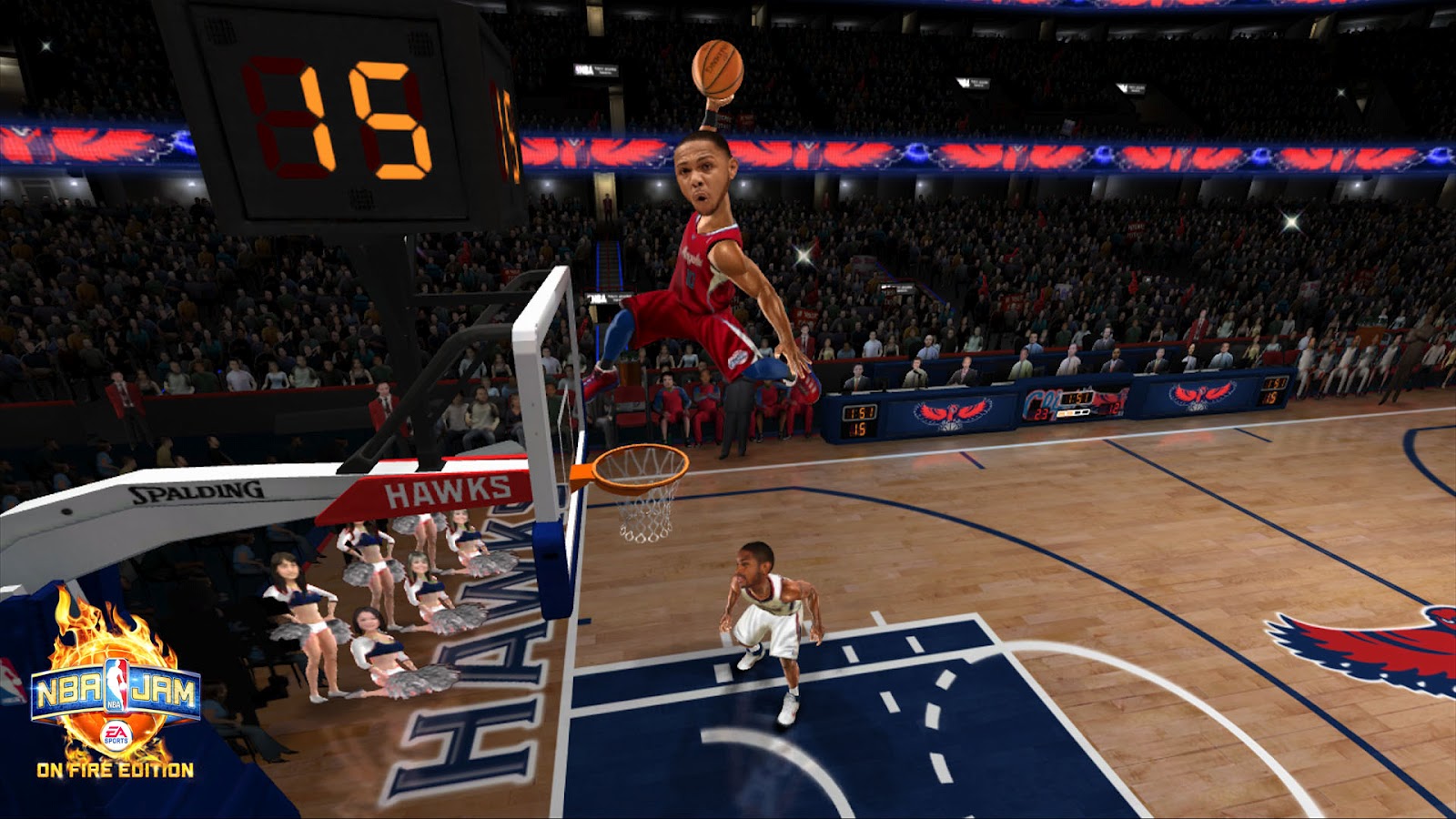 The game is not a technical titan here, but the style oozes everywhere from the big, photo realistic heads, to the sneakers being on fire as you run, to nets burning as an on-fire triple swishes home to the neon lighting throughout the shiny hardwood arena.  Things animate smoothly, though it pales to the number of authentic animations found in more serious titles like NBA 2K12. 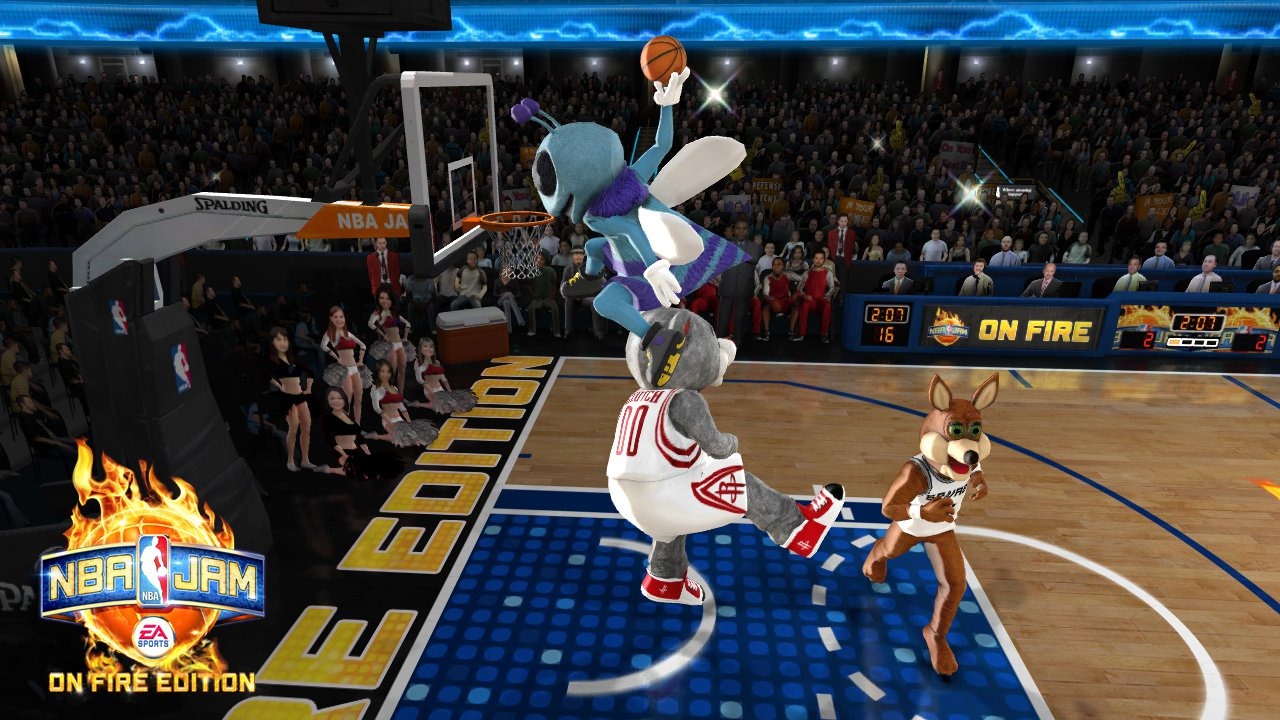 Matter of opinion to be had here.  The sounds are all well and good, but you hardly notice them over the music selection or even more notably the commentary.  Why did I say ‘matter of opinion’ to start?  While I absolutely love the commentary, my wife cannot stand it – cringing visibly at corny lines like “Projectile Dysfunction” when a block occurs.  She went so far as to question how the guy doing the audio could even have a job, and when I said that it was meant to be funny, she was of the opinion that they seriously missed the mark.  Me?  I’m perfectly good with my Boomshakalaka and On Fire! commentary. 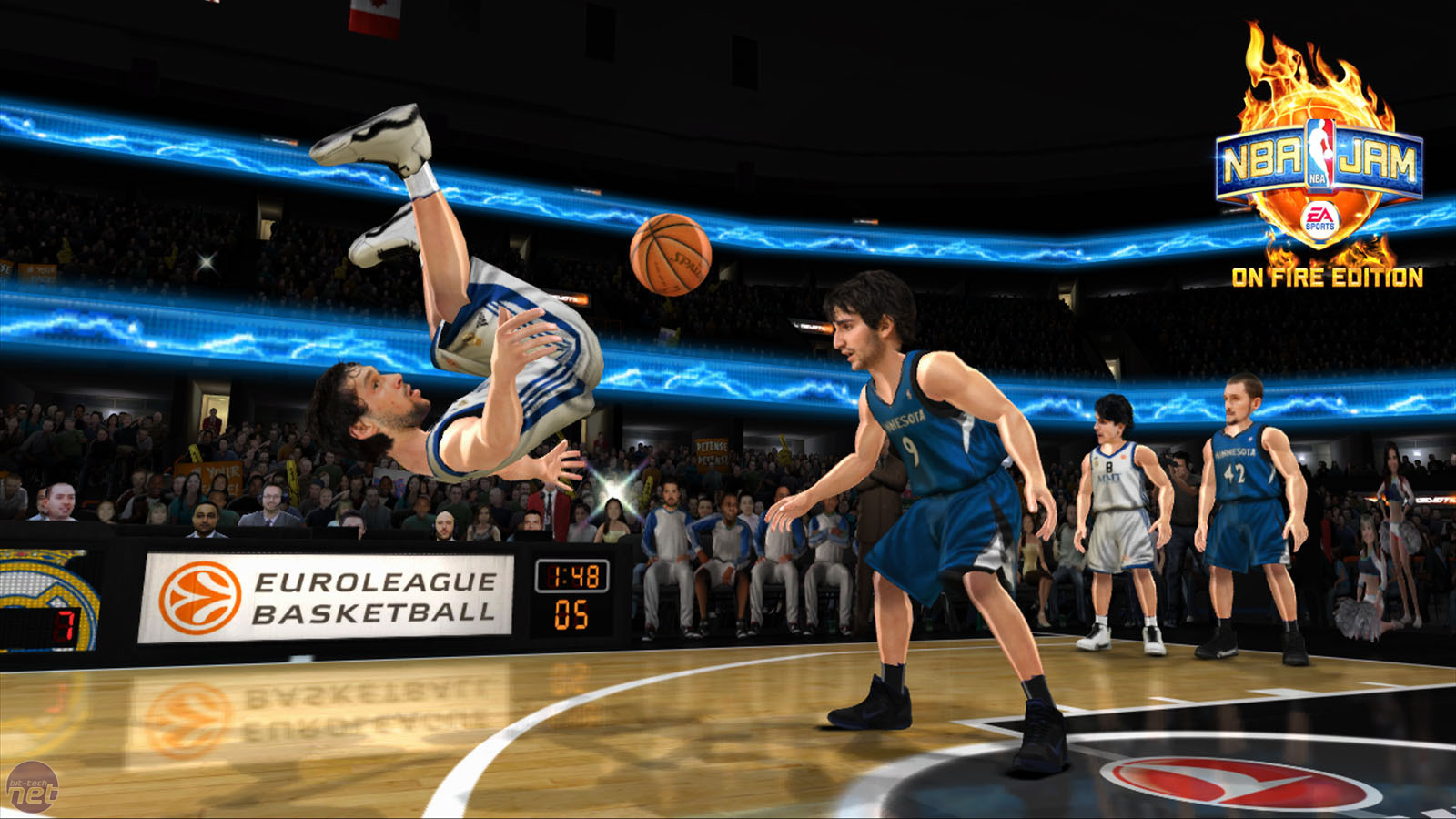 Pretty solid stuff here.  The game itself is pretty simple with two on two full court side-to-side action.  That you can get up to four people playing at a time and have online options is very cool.  There are a surprising number of things beyond the basic controls you can do though, whether it’s a dribbling move, alley-oop, trick shot (even though these generally get blocked, they’re pretty hilarious) and help to round out a package that has simple menu navigation and an easily accessible online mode. 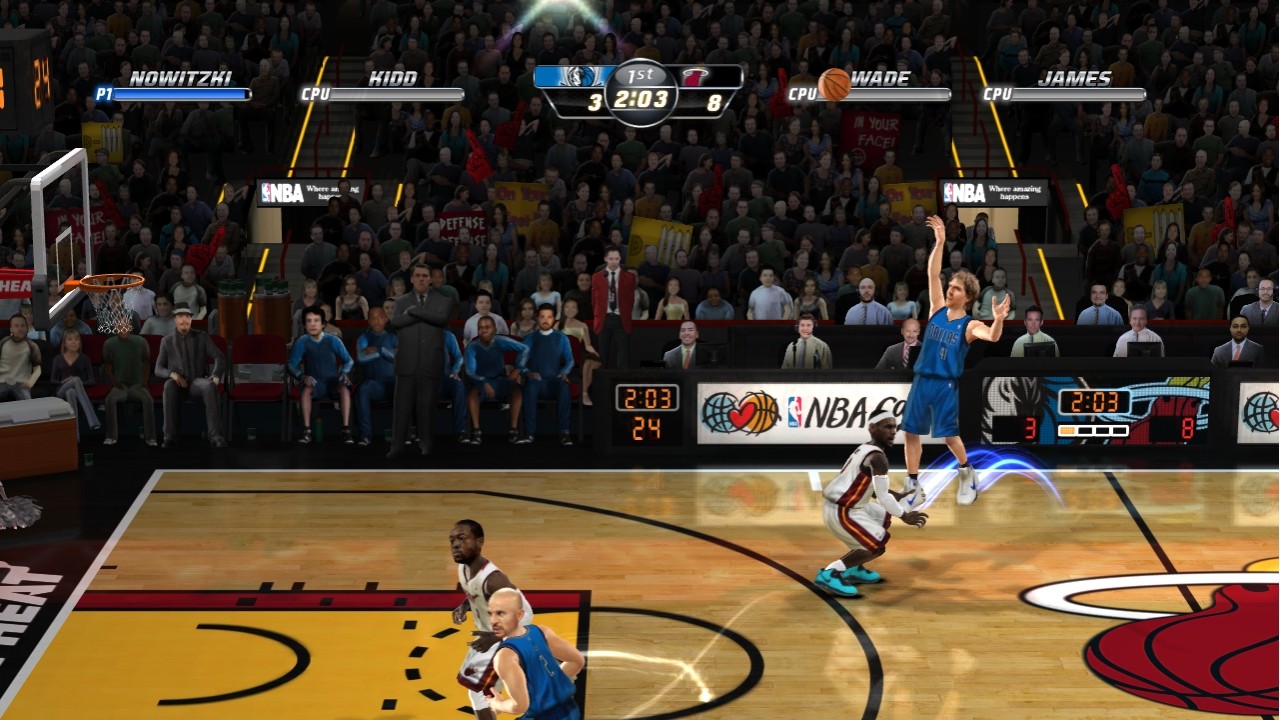 I have been playing this game on an average of every two or three days (just a match or two each time) for months now and still have not unlocked everything.  From different visual filters, to different basketballs to unlocking classic players and mascots and more – you will be busy for awhile.  The trophies take a while to earn, but they are fair.  There are certain conditions some games are played with (like 1-shot on-fire) and increasing levels of difficulty as well as built-in challenges like so many slam dunks to reach bronze and then a higher total for silver on your way to gold and platinum. 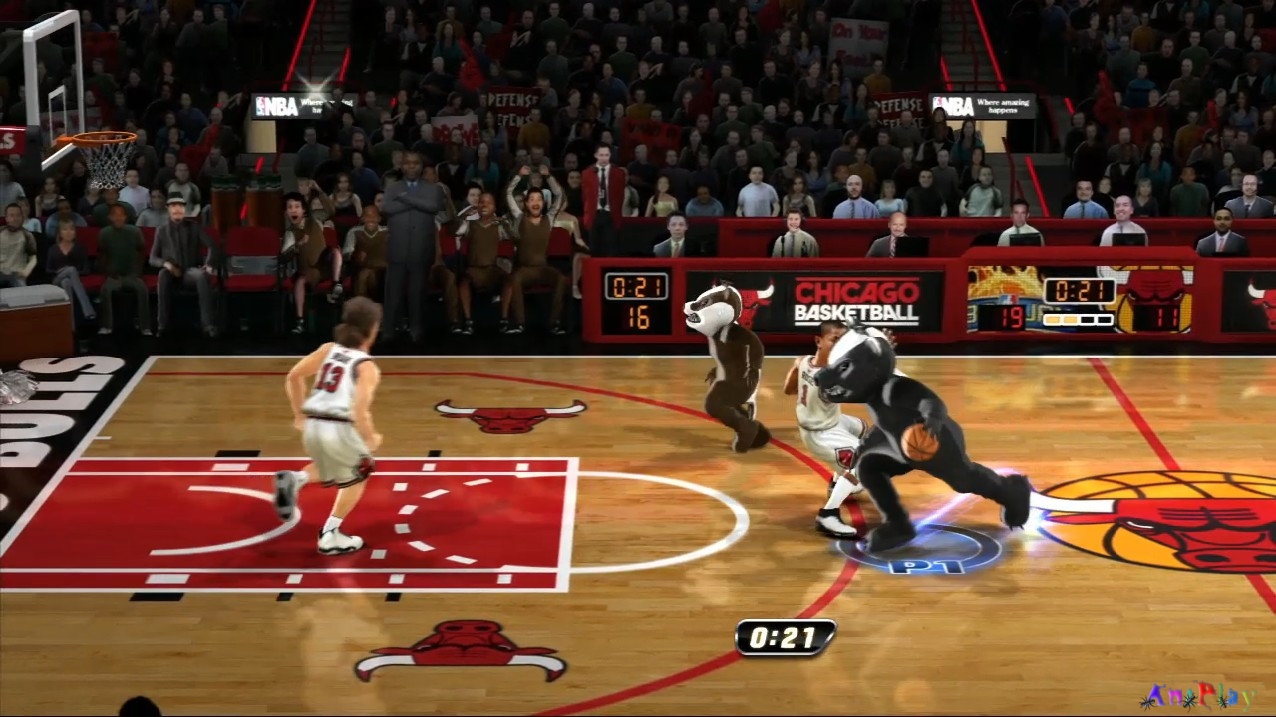 This is the best version of NBA Jam I have played of late.  The game is still getting some love from the developers too, as they pushed a couple of roster updates recently, which was nice since it was just adding new characters (and the original teams it shipped with were a bit outdated in some instances).  I Enjoy using my Detroit Pistons and generally run with a Laimbeer/Rodman combination, but there are so many players and teams that you can find any number of combinations to keep things interesting.  For me it is a perfect quick play.  I will usually hop on the PlayStation 3 in the morning, and play a match or two to kill 10-15 minutes before heading into work, and is a great way for me to start my day.