If asked, I will usually state that RPGs are my favorite gaming genre.  They come in all kinds of flavors, like any other established genre would.  These can range from games where you can affect the story through choices made in the game, such as Dragon Age, or blur the line between action and strategy such as the Fallout and Mass Effect games do, or they can be driven by growing characters and collecting loot like Diablo or many of the older RPG games out there. 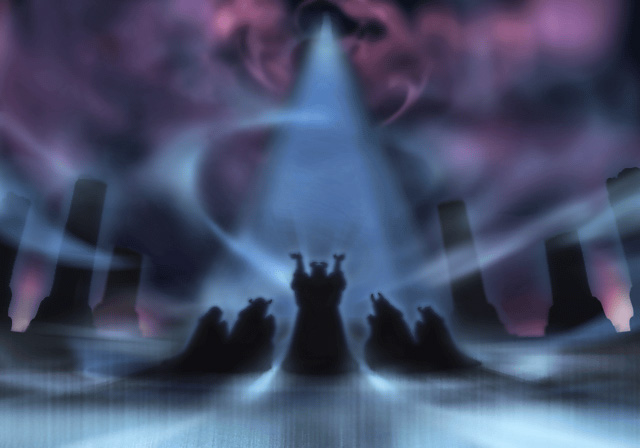 Elminage tends to fall into that last category.  It is a first-person dungeon crawler.  The most popular example of this is probably the Wizardry series, though a lot of other games have made use of it over the years.  One of my favorites dates back to the Sega Genesis with Shining in the Darkness, the under-appreciated cousin to the much more popular Shining Force games.

Overall I feel like Elminage does quite a few things right, but it has some corners that were cut that impact the game’s overall enjoyability.  The storyline is fairly straightforward – rings of power have been scattered about and need to be gathered up to prevent more demons from flooding the world.  You build a team of six characters that dive into these dungeons and fight turn-based battles along the way.  The appeal here is in finding new gear and leveling characters – a sense of discovery driving you forward more than then straightforward plot.  So what went right and wrong? 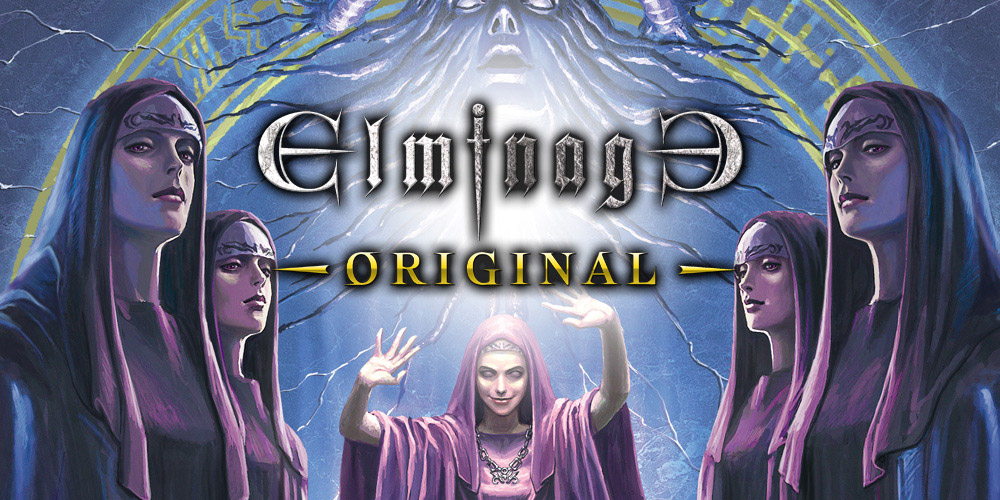 I really liked the use of color and there was some excellent detail in the monsters you fight.  However, those hoping for a lot of animation will undoubtedly be disappointed.  Creatures more or less ‘shake’ on the screen in front of you, without actually animating.  Combat spells and weapon effects splash across the monster depictions with some decent variety.  The places you adventure look good, but they are very simply animated, with walls that scroll about as you walk forward or turn left and right.  The city is a series of still images that you access via a menu – you do not actually walk around it.  Visually, there are better PSP games out there that do more to tax the hardware, but there have been a lot of uglier titles as well. 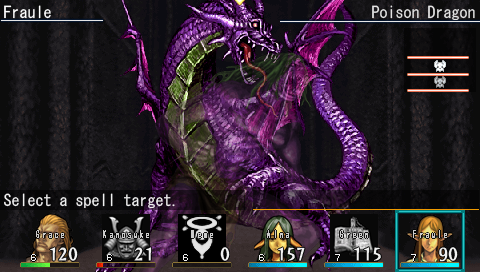 The music rests comfortable in the ‘above average’ to ‘very good range’ throughout most of the game.  There is a forest sector that had music I was particularly fond of.  The sound effects are a good deal more ‘meh’.  They do the job when you swing or cast a spell, but there is nothing standout in this part of the package.  So when you take these two parts of the audio package and roll them together, I come away feeling that things were above average, maybe even good – but not great. 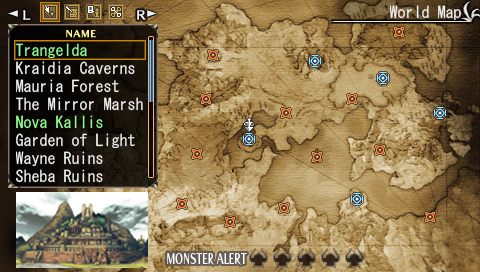 The game itself plays well.  Dungeon crawler games tend to have fairly simple controls, and that is the case here.  You also spend a good deal of time in menus, and here I felt they looked good, but more importantly they were quick and easy to navigate.  I cannot stress how a game like this can turn into a slog to play through if your menu system is a mess, so thankfully that was not the case with Elminage.

There are a handful of other niceties found here as well.  I recall games like Shining in the Darkness causing me to use a ton of graph paper as I tracked my adventures.  In a game like this, getting lost is pretty easy to do.  Of course things like automapping are pretty standard fare in a lot of RPG titles nowadays, but Elminage definitely has a throwback feel to it, so I was happy to see a good, detailed built in mapping system.  A couple of other tweaks like the use of the square button to auto attack instead of forcing you to input manual commands for each character were also welcome. 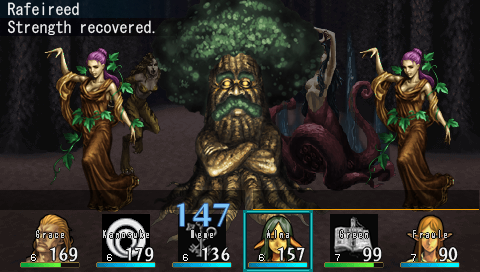 First the good: There is a fair amount of character customization available.  With classes and races in the teens, there are numerous combinations you can try out.  There is a lot of content here as well.  You can spend dozens of hours searching these dangerous dungeons, and combat is usually fairly brisk, so my interest was maintained.

Now, something that can be good or bad depending on your perspective: Difficulty.  This is not the hardest RPG title I have ever played, but do not come in expecting Elminage to hold your hand in any way, shape or form.  There is not a lot of instruction given to you to start, and death can come swiftly and often permanently.  Unlike most RPG titles, you do not just run back to a church to pay a resurrection fee.  You can do that here, but there is a chance for failure.  If that happens, you can try again to resurrect your fallen comrade at a greater cost, but again it could fail and when this happens the character is deleted.  This is an old mechanic that I recall from PC RPG’s decades ago, but in an era of frequent checkpoints, this could be frustrating for some players. 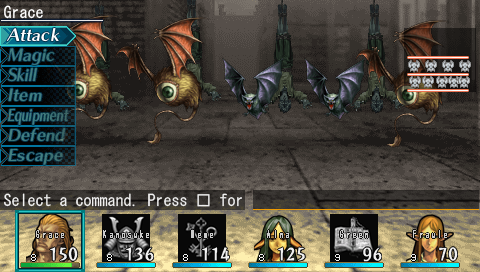 And lastly, the bad: The localization.  RPG and strategy titles generally have a ton of text, which makes localization efforts not only more difficult, but mistakes are more readily noticed.  For the most part, the translation gets the job done, but there are some things like text alignments that are off and the wrong races at the creation screen (seriously, human and elf are fine, but almost every other race is scrambled.  You could select gnome and wind up with something different in-game, like dwarf).  The localization simply feels rushed.  That is preferable to not getting the title at all, but it does lend a sloppy feel to a game that otherwise looks and sounds pretty good.

And as a bonus, the ugly: The face load option.  Part of the character creation process is to select an icon or a face graphic, but you can also use ‘face load’, which allows you to take a 48×48, 256 color BMP or PNG from your memory stick and apply it to your character.  Trivial, but cool all the same, right?  The problem is, I could never get it to work.  The directions again seem to be suffering from translation issues as they tell you to create a “PICTURE” folder, but according to quite a few forums, the directions should have said “PHOTO”.  Even then, I can see the icons on my PSP images menu, but the game itself does not seem to ‘see’ them at all, leading me to believe that I might have the setup wrong.  I have read quite a few forum posts from people who are struggling with this both on the PSP and the Vita.  I tried contacting customer service at UFO Interactive over a week ago, but still have not heard anything back from them. 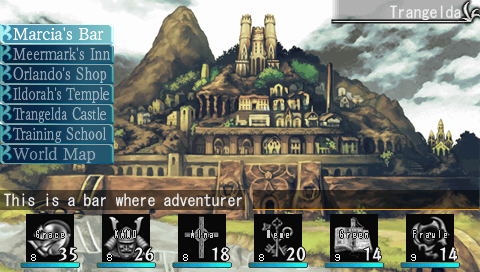 The problems I have with Elminage are all ones I can live with.  Face Load may not be working, maybe the translation reads awkwardly at times and the sound effects are a bit of a bore.  The good outweighs the bad though for me.  I like a challenging dungeon crawl, I had fun experimenting with different character classes and races and I found both the graphics and music to be appealing to me.  I have read that another Elminage may be coming out for the DS in the somewhat near future, which seems plausible since there are at least three of these in Japan.  I am personally looking forward to seeing what the future titles look like.  Hopefully a bit more care can be put into the game’s finer details because if that happens, I think Elminage sequels will be something to look forward to.