Just a quickie for this Wed…

Now that the Wii is basically on its last legs as a system (some would probably argue it lost its legs two years ago and has been on the ground dead ever since), I thought it might be interesting to take a quick look back at one of the earliest titles that released for it and that I acquired: Link’s Crossbow Training. 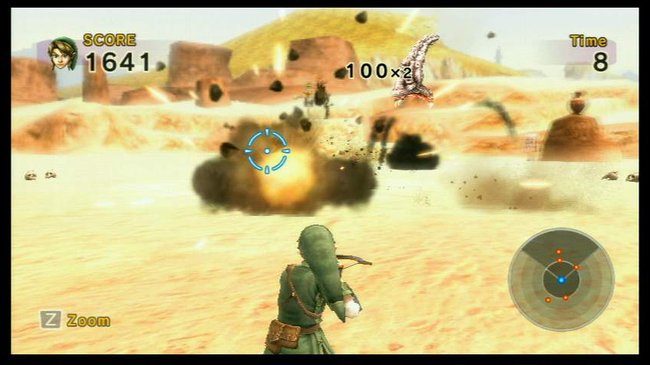 The visuals are almost straight out of Twilight Princess (also a very early Wii release) which is not a bad thing at all. Along with the sound effects, the presentation was actually pretty entertaining for a game that is at its heart, very simple. Nintendo does love its ‘zapper’ games – I recall the handful I used to play on my NES a million years ago (Gumshoe, Duck Hunt and Gotcha all spring to mind), but I generally enjoyed them.

What you see is really what you get – some Legend of Zelda themed shooting galleries that are actually fairly entertaining, but are done and over with very quickly. The incentive to replay them more than once comes from trying to get a better score, but really you can get through the content in about an hour.

Probably the most compelling argument for this title when it came out was that it was bundled with the Wii Zapper, which is basically a controller case that lets you pull a trigger and aim a bit more effectively. I know a lot of people really did not care for the Wii Zapper, but in the handful of games I did use it, such as this or especially in Dead Space Extraction, it was more comfortable than trying to work the remote – or worse yet a remote with a nunchuk like in Dead Space. 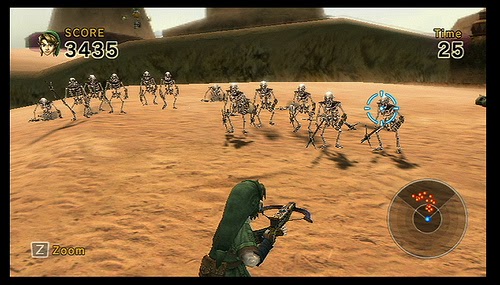 I suspect now you could pick this game up for a buck or two used from anyplace that bothers to have it in stock, but really given the short duration of the game, it probably is not worth the effort. This was basically a glorified demo to try and sell the Wii Zapper, and I am sure it did its job early on when the Wii was more popular, but now it is hard to recommend this to anyone but the most ridiculously diehard of Link fans – and even then only because it is likely very cheap now.