Last year when I played Naruto Shippuden: Ultimate Ninja Storm 2, it was one of the most entertaining games I had gotten my hands on in 2012. I fully plan and look forward to playing Ninja Storm 3. I am not the most devout of Naruto fans – I always followed other shows like Dragon Ball Z a bit more closely, but Bandai Namco’s Naruto games usually entertain me quite a bit. 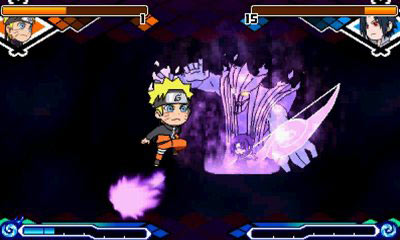 Naruto Powerful Shippuden however, is a very different game from any of the others in the series I have played. Initially, that difference was pretty jarring, but as I eased into the game for longer and longer stretches of time, I found myself enjoying it more and more.

The premise is certainly different. Most of the other Naruto games I have played either shuffle me right from one major fight opponent to another or let you wander a sort of realized world as you run quests and sometimes fight major or minor opponents as the story dictates. Powerful Shippuden breaks the story up into lots of quick missions, where you still have a wide assortment of control options, but different goals than just beating one opponent’s life back down to zero. 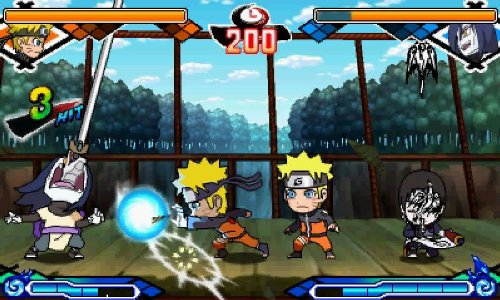 I really like the chibi style graphics here. They simply ooze wackiness, which the game and story back up at most turns. Combat attacks are as over-the-top as you would expect from a game based on an anime, but it all carries a bit of extra charm with it because of the silly, yet well-animated characters. Colors are bright the details are good enough that you can recognize characters who are squished and pulled out of proportion. 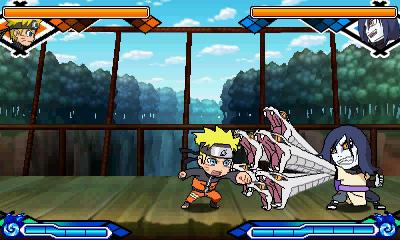 The job gets done here. The Naruto games often have some really good, catchy music. Here the music is good, but not so memorable. I never heard anything grating – it was always pleasant. The sound effects are varied and serve a purpose, though they are sometimes overused. In a single mission, you’ll attack upwards of fifty times. The types of attack help mix up the sound, but you’re still essentially hearing the same thing a dozen or so times in a minute. 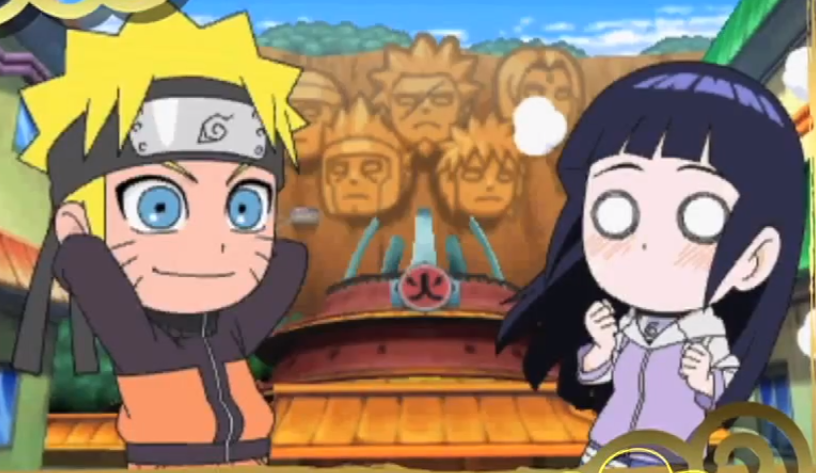 There is actually a surprising amount you can do. You can touch the lower screen to trigger a hyper mode, or use the left button to call in support, the right button to pull off blocks and super attacks, and also do ranged and close attacks, as well as jumping and dashing. It all response nice and quick, and as mentioned before it all animates pretty smoothly too.

On the one hand, the missions are just about the perfect size for a handheld gaming console – each one usually only lasts a handful of minutes. On the other, there is a slight lack of depth to what you are doing. You jump to kick birds, you attack wolves on the ground, you use special moves to knock back blockers and you have a dash button to string together combos or race through levels. Still, compared to a lot of fighting/action games out there, this one lacks some depth during missions. 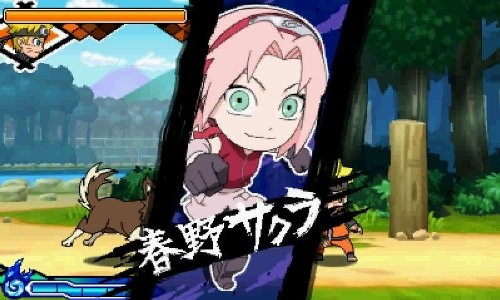 I have seen some forum comments that argue this title could have been a downloadable or ‘tablet’ game since most of what you do takes place on a single screen. The only time you really have levels or platforming are on the timer levels where you dash a ton. The structure is unlike anything else I have played in a Naruto title. The small missions save after each round, and offer up action in fairly small bursts. Getting through the game’s roughly 200 missions really does not take terribly long either.

That being said, I found myself enjoying the experience system. I’m a sucker for games that give you a persistent state of progress – and here you gain experience for each mission you complete. You can even get bonuses for meeting certain conditions. You can drop the points into a variety of areas, such as your level, your defense, your special attacks and more. I like that the game encourages you to experiment as well, because you can pull points out of one field and dump them in a different one as often as you like. Got a round where you need to survive? Raise your hit points and defense. Have one where attacking enemies from a distance is preferred? Improve those special skills. 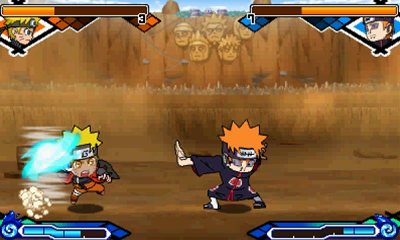 Naruto Powerful Shippuden has a ton of comical charm to it. You are not only playing Naruto but also Rock Lee as a secondary protagonist. The characters look different, but play fairly similarly. The combat is pretty basic, but there is some replay value to be had in the experience system. If you approach this game looking for the next Ninja Storm, you will probably come away disappointed. But if you accept this title for what it is – Naruto themed, quick bursts of action with lots of amusing art – you will probably enjoy yourself more often than not.