So far, I have not had a chance to review too many PlayStation Vita games. I did an additional commentary on Guacamelee!, though I was focused more on the PlayStation Network game. I also got to do a review of Rocketbirds. While both of those games were good, neither one was a reason to buy a Vita. I reviewed the hardware here, and the Vita is a seriously impressive machine. However, one of the earliest titles mentioned for the Vita was Uncharted: Golden Abyss, and it was one I have been wanting to play for some time now. 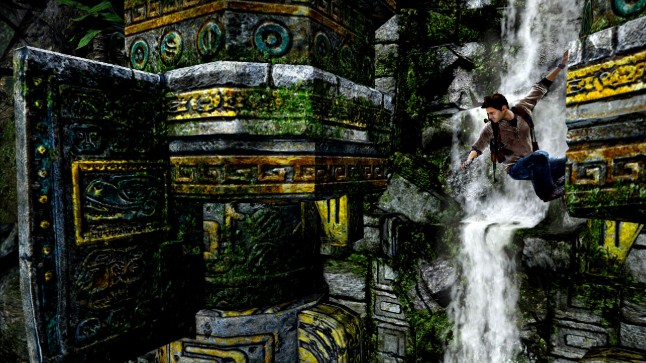 This one was a no-brainer for Sony, but also had the ability to set up for some serious disappointment as well. Uncharted is one of the best series of games released for the PlayStation 3. It has become one of the most popular titles of any gaming console for several reasons: excellent gameplay, interesting stories and characters combined with excellent audio and visual presentation.

The brand recognition meant that out of the games, Uncharted: Golden Abyss would probably be one of the Vita’s best-selling games. However, this title was not being developed by Naughty Dog, but actually Sony Bend. Also, how well would Nathan Drake’s larger-than-life adventures translate to the small screen? 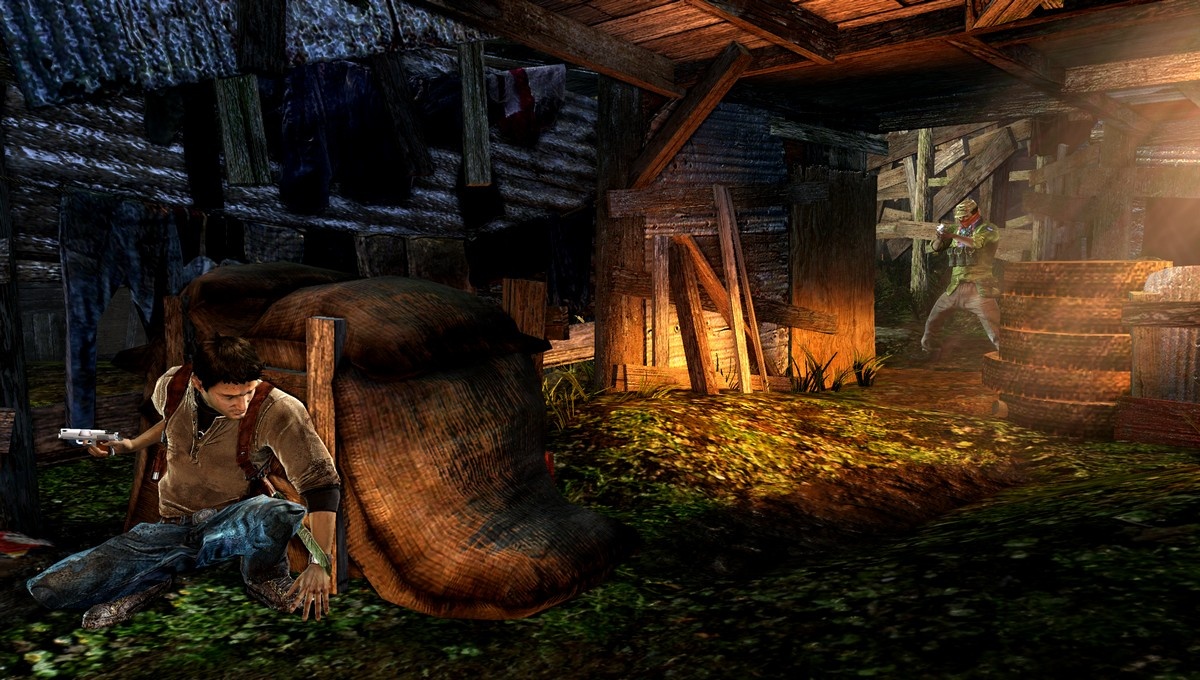 Pretty hard to argue with how Golden Abyss looks. Uncharted earned a well-deserved reputation for getting the most out of the PlayStation 3 hardware, and to be honest – this small scale version of the game definitely looks like a part of the family. A lot of the same hallmarks of the series are found here, with good color usage (the yellow ledges help you find handholds in the environment), varied locales and excellent-looking characters. I would go so far as to say it is probably the prettiest handheld game I have played to date – and yet it feels like it should have been more.

That said, the Vita’s OLED screen is an amazing viewing surface, and I felt like maybe the colors should have been a bit more varied and vibrant, growing a bit repetitive over time. More variety in the scenery would have been nice as well. A missed opportunity that costs this score a point, because a bit more effort in the number of locales really could have shown this game off. As it is though, you spend almost all of your time in the jungle or underground. Maybe that is a bit harsh, but some change in scenery would have been a huge help to keeping the game fresh throughout the adventure. 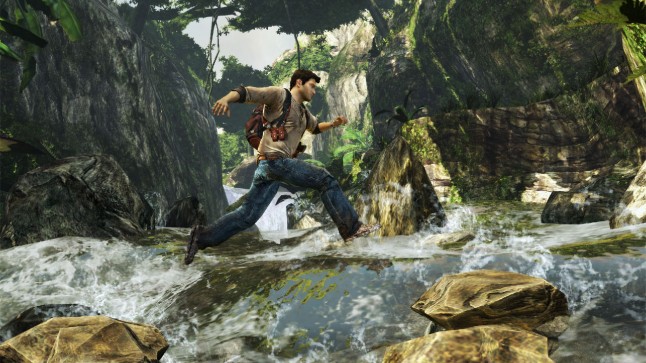 The voice acting is again very good, with some returning cast members from the original games (most notably Nolan North once again portraying Nathan Drake) and newcomers that play out their parts convincingly. Still, these new characters never really connected with me the way others in the earlier Uncharted games had. The music is also quite good, and the sound effects have some variety to them. The Vita’s speakers are good, but not as good as using a solid set of headphones. Even then, some of the audio punch is lost when compared to the other Uncharted games that use the surround speakers in my living room, or even the sound bar in my bedroom. 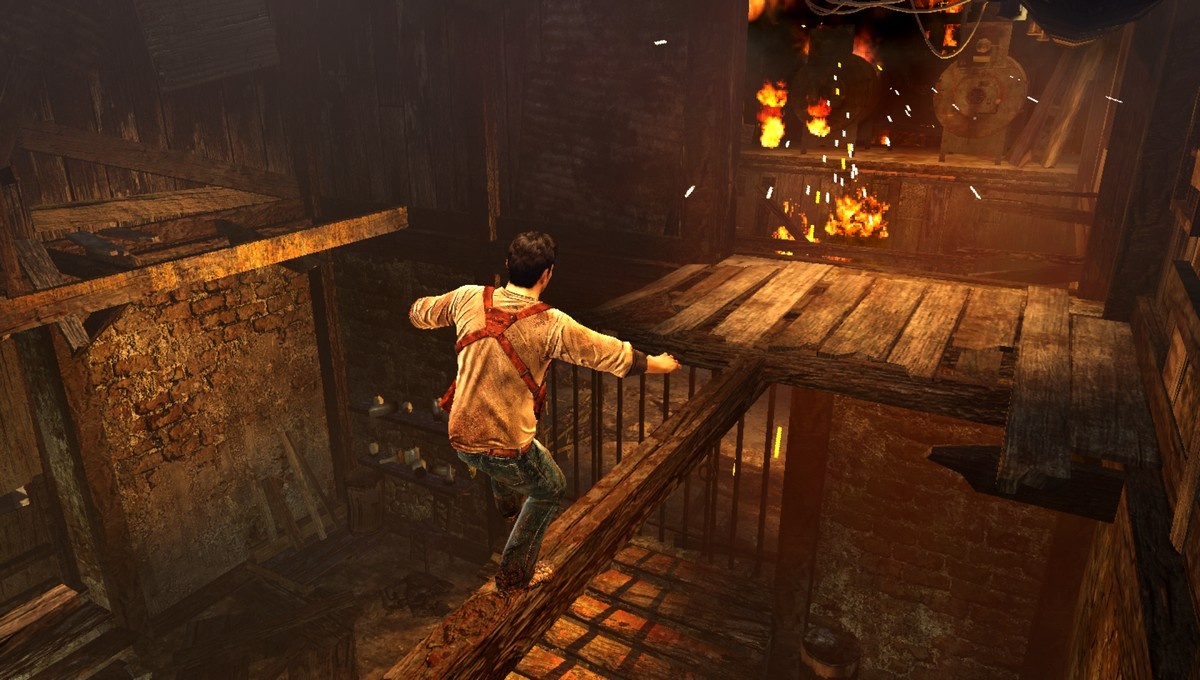 The aim assist is nice since I seemed to have a harder time controlling my accuracy here than I did with the console versions Uncharted. There is also a ‘hint’ mode in the other games that is nice in case you get a bit ‘lost’ as what to do next – and that is lacking here. There were a couple of times my companion took off, saying something as they darted away unseen, and I found myself wandering about aimlessly for longer than I should have been.

I have to give Sony Bend some kudos for trying to show off the Vita hardware here, but sometimes they went just a bit too far. It seems like every time there is a new console – especially one with new interface options (think Wii Sports), there is a game that tries to milk every last bit out of those new control options, more or less turning the game into almost a glorified tech demo. Golden Abyss does some of that here as well. You can touch the bricks to scale Nate across a sort of drawn ‘path’ while you are climbing – something that was neat but I quit using after the first few chapters. You can tilt the Vita to the side and have Nate lean out so you only have to press the jump button to leap off of a wall you have him clinging to. I actually liked that feature because the controls on the console games could get finicky by nature, and sometimes I wanted to lean and struggled to do so.

The front touchscreen is used to help solve some of the puzzles, such as a ‘slider’ one near the end of the game. However, melee always devolves into swiping motions which really break the flow of the combat. A lot of the button-pressing quick time events found in Uncharted 1, 2 and 3 are now replaced with swipe gestures. I did not care for these much – they felt overused without really bringing anything to the table. You create charcoal drawings by rubbing your finger of a piece of parchment – no challenge to it, just a way to waste twenty seconds.

At one point you have to hold your camera up to a bright light source to illuminate something. This. Took. Forever. I tried three different lights and stood around feeling like an idiot for about five minutes. You can also use the back touchpad to adjust things like your zoom range on a sniper rifle or shimmy up or down a rope. The problem with that is, I would often bump the back control pad while aiming, messing up my zoom accidentally.

In short, the basics are fine, but the advanced stuff gets in the way more than it enhances the experience. 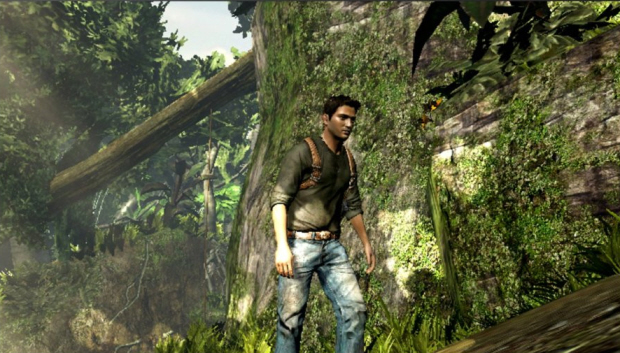 Overall, Uncharted: Golden Abyss is a good overall game. There are a lot of chapters, but they are broken down into small chunks with frequent checkpoints – a welcome thing since you cannot simply save right where you are from the menu like in prior games. There are a handful of characters – one returning and a couple of newcomers – and the new ones just did not endear themselves to me the way others have in the past. Partway through the game, old Sully returns to Nathan’s side, and it made a huge impact on how much I enjoyed the story. It made me realize how much his absence hurt things early on, and how the new characters just seemed a bit lacking. They were not bad, but they did not measure up to those introduced in the console games. 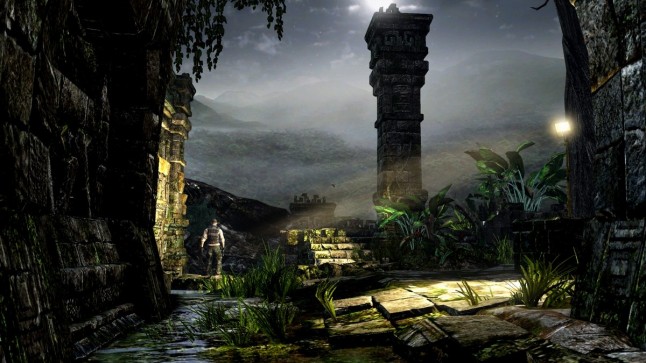 Sony Bend deserves credit. There were missteps along the way, but despite some moments feeling like the lesser little brother of its console siblings, Uncharted: Golden Abyss is still a lot of fun. It is not without flaws – especially in the sometimes gimmicky control schemes – but thankfully those are not enough to completely derail the proceedings. There are a lot of chapters here, but most of them are fairly short – perfect for portable play, but in the end you are still only probably getting around a twelve hour game, give or take. A fun offering, and for fans of the series, something that you should play – because Uncharted: Golden Abyss is a fun game, it just fails to completely live up to its impressive pedigree 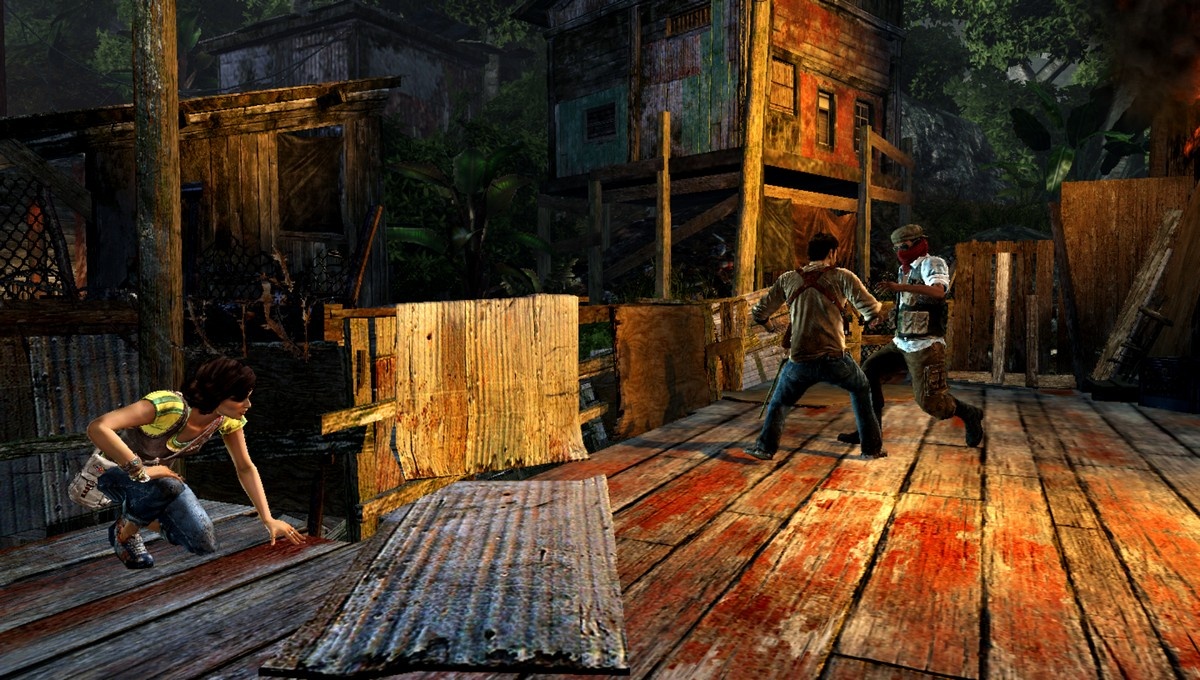