I have played a lot of puzzle games over the years, but The Splatters came across as something quite different when I was first introduced to it last year. There is a lot more to it than the typical puzzle games, which usually present themselves with some strategy such as aligning three colors in a row or working disparate shapes into one another to create full rows. 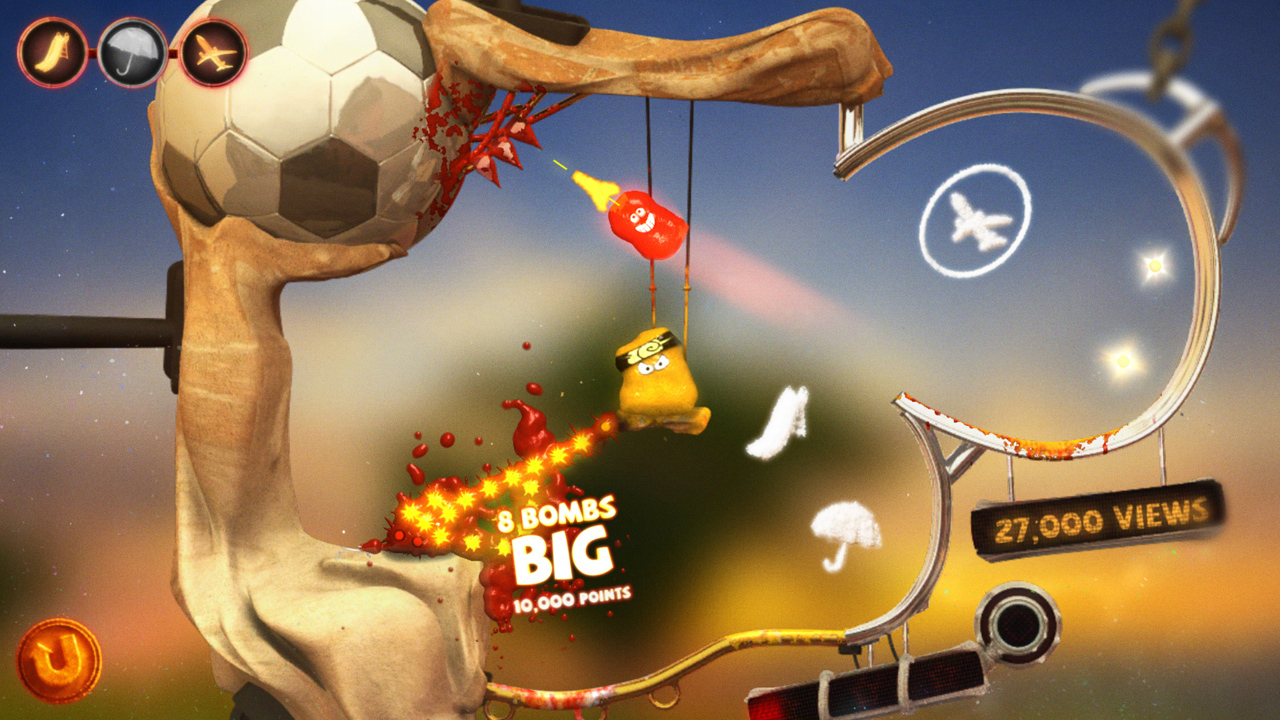 Worms took the notion of puzzle-like strategy with objectives and put a spin on it that borrowed heavily from the older trajectory-based title Scorched Earth. The Splatters – and now Super Splatters – borrow a bit from that design in that you are trying to aim these splatters at fireworks so their chemicals can combine and set the fireworks off.

It is a zany premise to say the least, but the entire presentation just oozes a wonderfully humorous zaniness from start to finish. Super Splatters does not bring competitive multiplayer to the table the way the Worms series does, but it is instead more about figuring out each of the varied levels and using the tricks you learn to set off all of the fireworks.

Super Splatters is very similar to its older Xbox 360 counterpart, The Splatters, which I liked quite a bit when I originally reviewed it here.When I heard that it was coming to Steam, I was excited to see what could be done by SpikySnail with another year of development and lessons learned under their belt. It was clear from my interview with Sagi Koren of SpikySnail that the development team put a lot of love and enthusiasm into Super Splatters, and I am excited to say it has translated over to the PC version wonderfully. 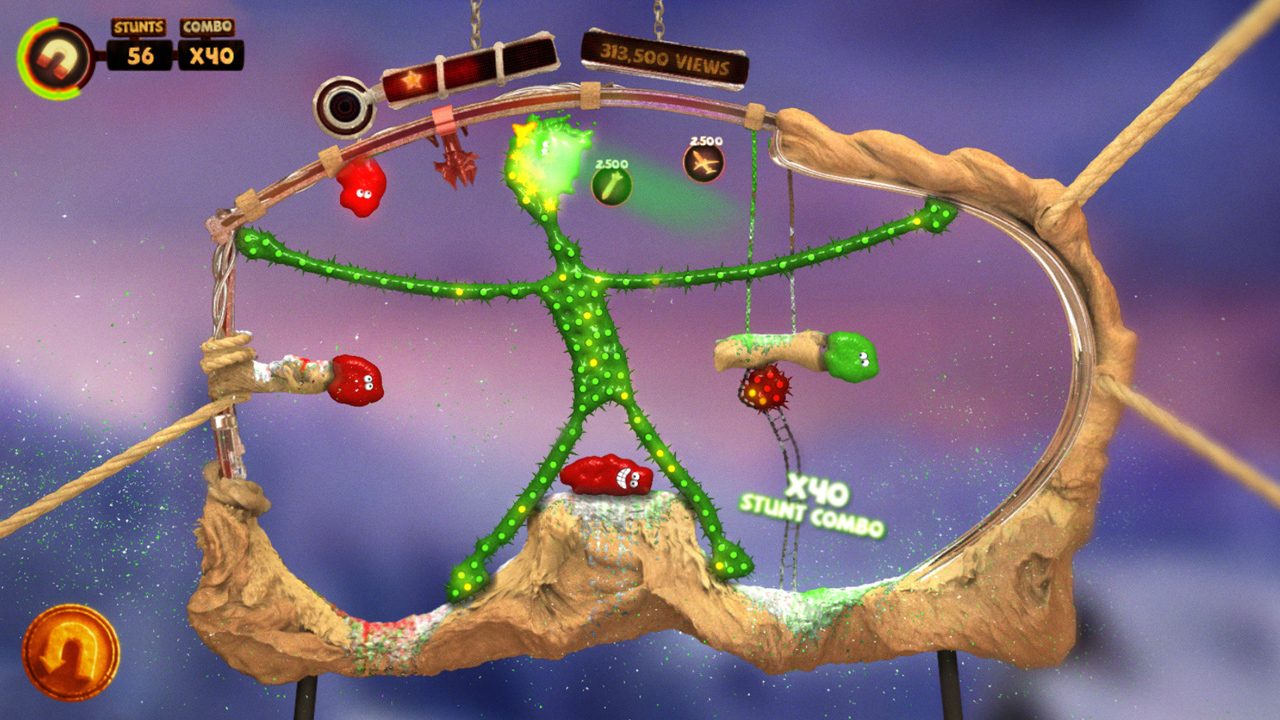 It feels a bit pun-like to use the word ‘ooze’ when talking about Super Splatters, but I am going to do it anyway. From the range of vivid colors, excellent animation on both the Splatters themselves as well as the physics applied to their goo, Super Splatters oozes with unique style that is very pleasing to the eye. Sometimes it is kind of amazing just how much is happening on the screen when you get a lot of combination reactions to go off at once, and sometimes there are parts of the screen that get a little too obscured from all of the busywork of chemicals and goo – but it sure looks pretty. 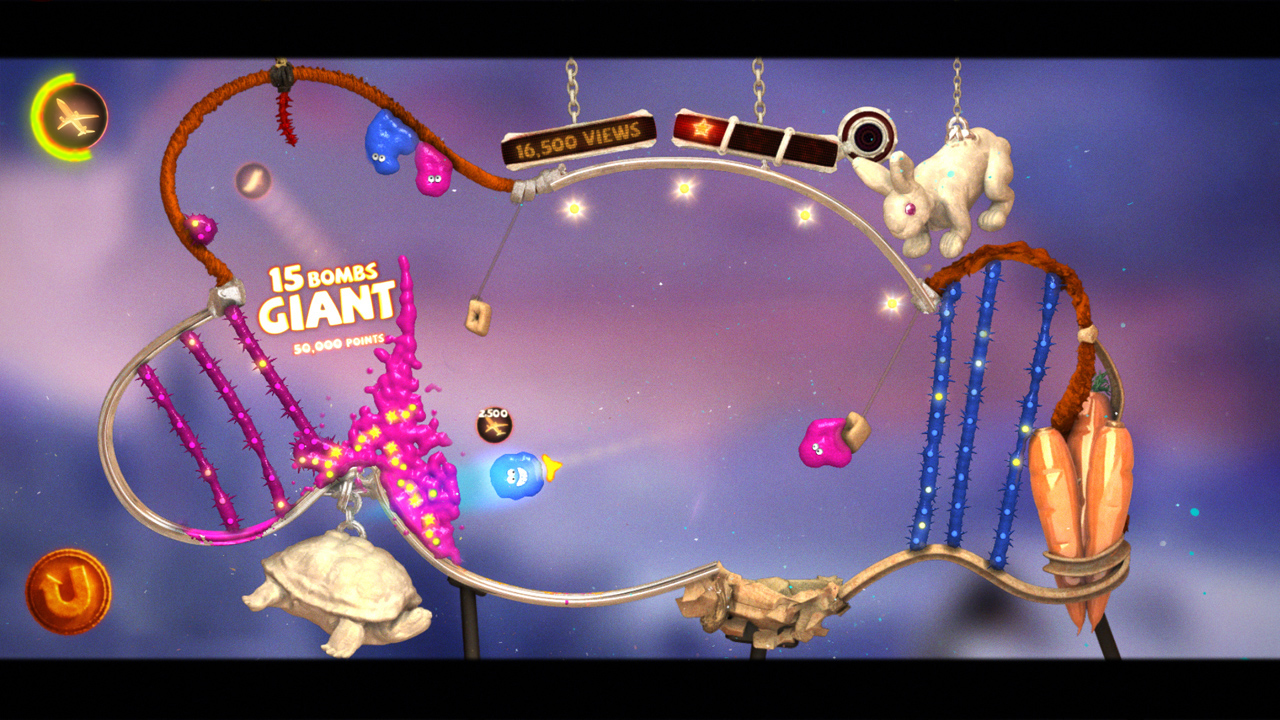 The soundtrack for Super Splatters fits right in with the visuals. The music has a sort of liveliness that goes hand-in-hand with the colorful backgrounds and the surprisingly lively little Splatters. Aside from the music, the sound effects are entertaining as well. As your little Splatters… well, ‘splat’ against the environment and set off chemical reactions, it all just works to add to the game’s appeal. 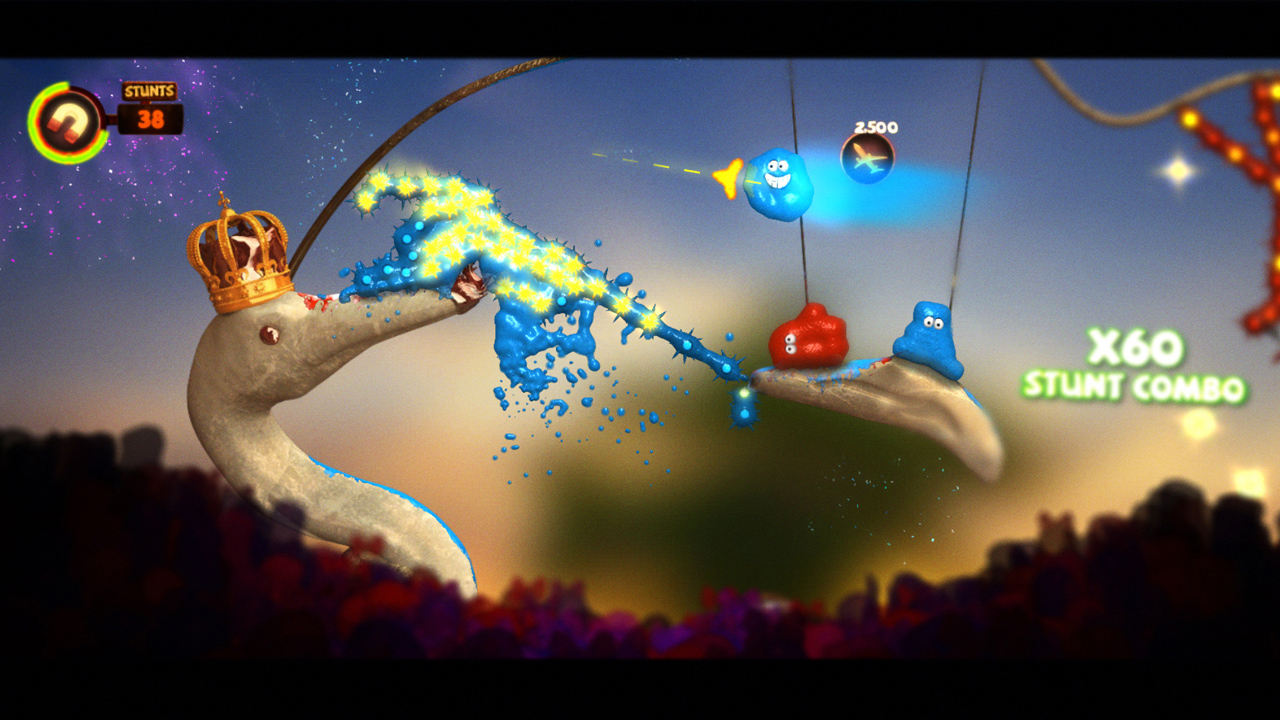 The campaign mode feels a little bit bigger and better this time around, and the game is really easy to pick up. In less than five minutes, you feel like you can competently play through the levels. The menus could be a bit more useful – I never saw a way to see objectives once I started a level up – but they were not terribly hard to navigate or anything. Using Splatters TV (more on that below) was also nice and easy. Despite all of the cute audio and visual window dressing, the physics are what make this game work. There is a sort of randomness to how the goo operates at times – and that can frustrate some people I suppose, but I actually liked that. It made me feel as though with a bit of luck and skill, any level was beatable. 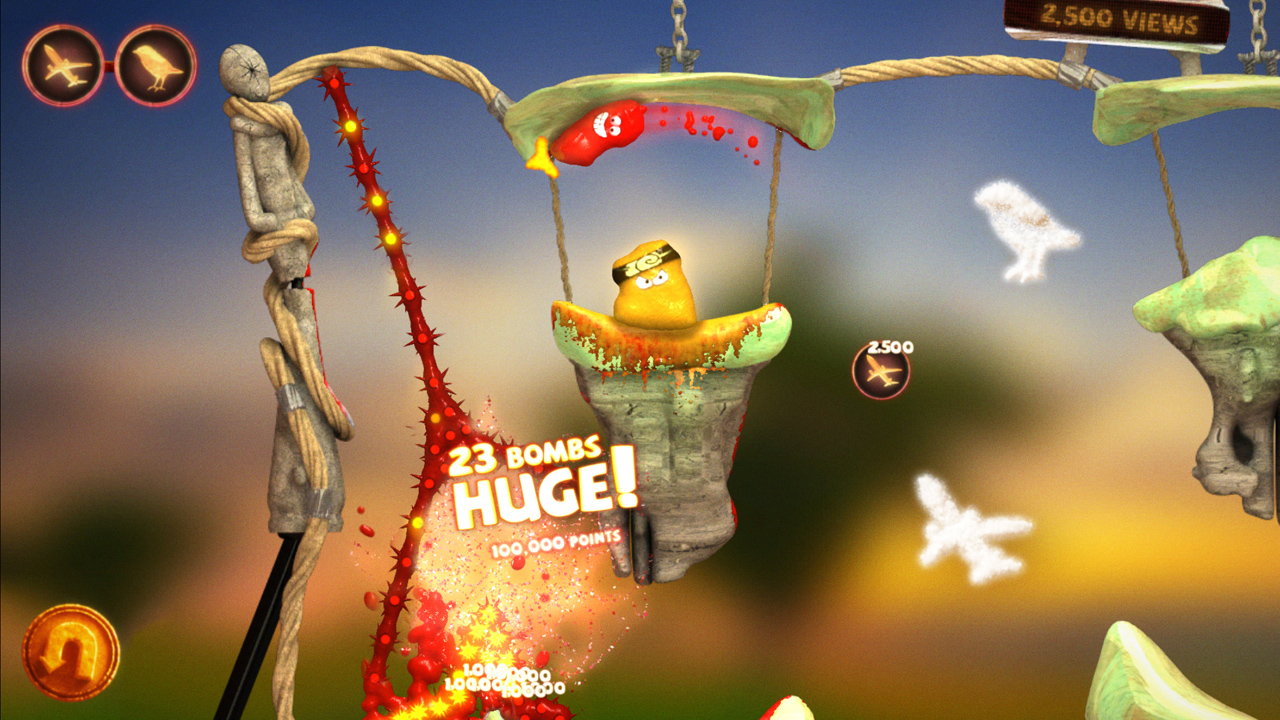 Essentially SpikySnail Games took an excellent title, and made it a bit better. I touched on how I felt like the campaign mode was an improvement, but the core gameplay mechanics and hooks are still in place from The Splatters to Super Splatters. You can get through the levels in several hours if your only objective is to set off the fireworks. The scoring system and range of tricks you can use give you a reason to replay levels and to come at the challenges from a different perspective. Additionally the Splatters TV option gives you a chance to boast some of your best levels for bragging rights, while also giving you a chance to see how others tackled a particular stage. Toss in the way the physics system means the same level never really plays out the exact same way twice, and you have some pretty solid replay value here. 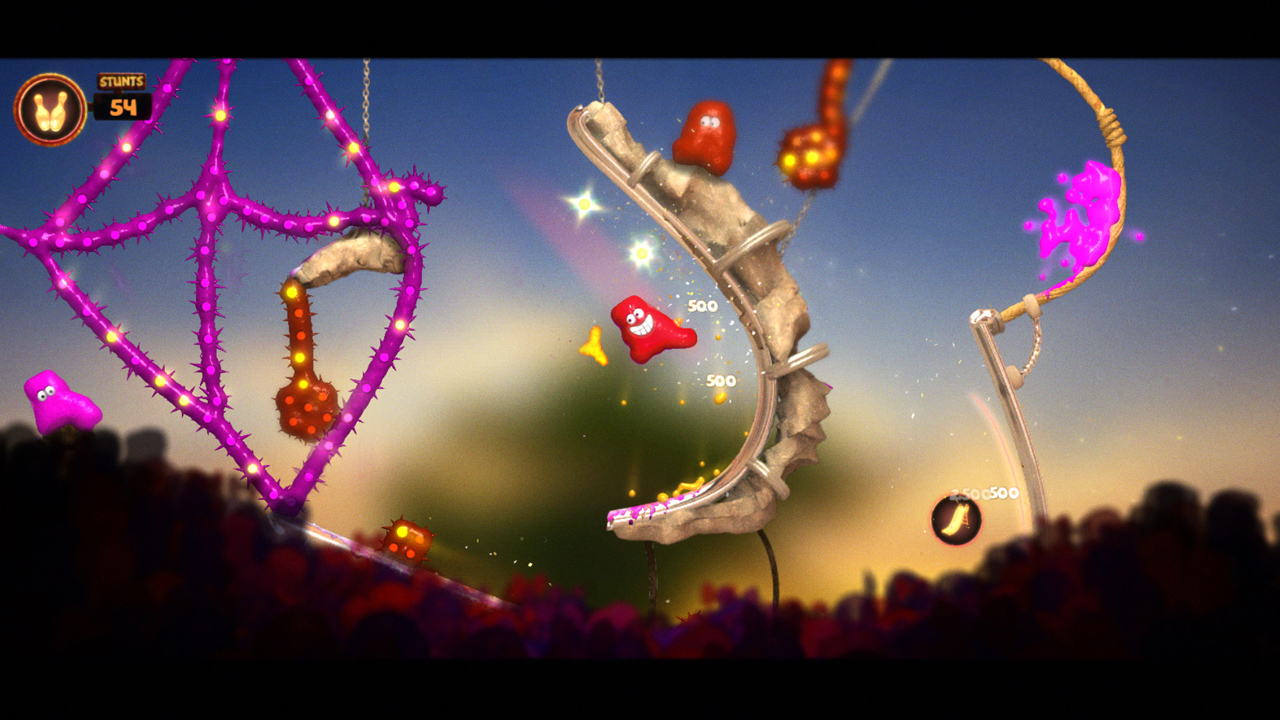 And speaking of value, that is how I view Super Splatters. It rings in on Steam at a very reasonable $9.99. If you are not a fan of puzzle titles, Super Splatters might be different enough to at least get you to consider it anyway. Now that the game can be had on PC as well, hopefully this opens Super Splatters up to an even larger audience than it saw on Xbox 360, because it deserves to be played.